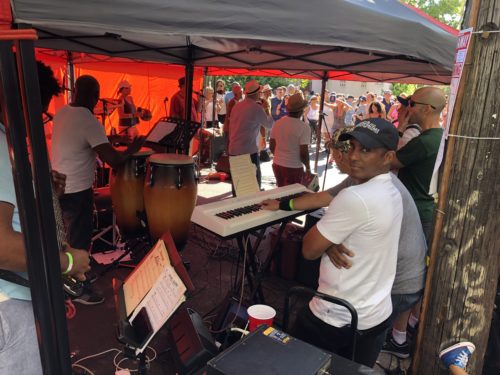 The last mambo. Really? Will the forces of real estate speculation and the tech economy bury this living mix of African, Latin American and US culture that finds expression in music and dance? Or will diverse Bay Area communities continue to congregate and thrive, drawing strength from deep traditions, while building social and educational opportunities for positive learning and growth?

In The Last Mambo, her debut film, Rita Hargrave documents the history and current state of salsa and Latin jazz in the Bay Area. A native of Washington, DC, Rita is a practicing psychiatrist, a denizen of the dance floors, and a working musician. She hit on the idea for the film when a favorite Sunday afternoon salsa spot, Jelly’s on Pier 50 in San Francisco, closed its doors in 2010. Sensing an imminent threat to the scene as venues fell prey to commercial developers, Rita recognized the importance of documenting the story of Bay Area salsa and telling it to the world.

Teaming up with film producer Reginald D. Brown and musical director Wayne Wallace, she proceeded to make The Last Mambo, which I recently viewed during a community fundraiser in Berkeley. What emerges from the film is a paradigm of integration, as music and dance forms from Africa, Europe, and the Americas create a cultural blend unique to the Bay Area.

Immigrants to the Bay have gathered in San Francisco, Oakland, Berkeley, and Richmond for a century – Mexicans fleeing civil war in the ’20s and ’30s, Blacks arriving to work in the shipyards during World War II, Asian-American immigrants, including Spanish-speaking Filipinos, and white folks with a love of the music, to name just a few. These communities merged on dance floors around the Bay and socialized to a new music that celebrated diverse roots.

In the Bantu language of the Kongo people of West Africa, the word mambo means “to talk.” In Haitian Creole, it refers to a female spirit doctor. In Cuba, mambo is a musical style introduced by two bass-playing brothers, Israel “Cachao” López and Orestes López in the 1940s. Bandleaders Pérez Prado and Machito popularized the mambo in the US, where the virtuosic dance style was performed in elegant ballrooms such as the Palladium in New York. 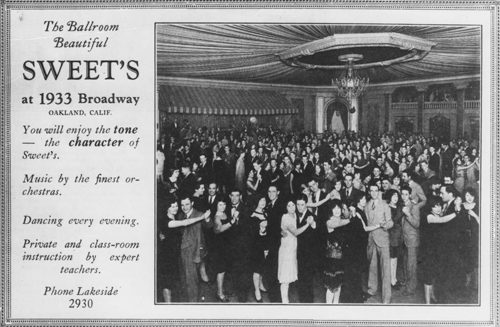 Poster from the collection of Charles H. Carlos.

Sweet’s Ballroom was the Palladium of Oakland. The East Bay Mexican and Latinx community gathered at Sweet’s for Sunday afternoon dance parties known as “Tardeadas.” Gentlemen sporting zoot suits and ladies in their finery danced to the sounds of bolero, danzon, cha-cha-cha and mambo. Jazz and Latin music intermingled as Sweet’s played host to the big bands of Count Basie and Duke Ellington, as well as Tito Puente, Dizzy Gillespie, and Chano Pozo.

During the 1940s, San Franciso’s Black population grew by nearly thirty-thousand, due in part to the many African-Americans from the South who came for wartime work in the shipyards. The Fillmore District gave birth to a network of Black-owned hotels, shops, and nightclubs. Jazz, blues, and Latin music thrived. The locals called it “The Harlem of the West.” Van Ness Avenue was the color line; Black musicians had to stay west of the thoroughfare. The Fillmore was the place to go for late night jams and a steady mix of Latin rhythms and jazz. 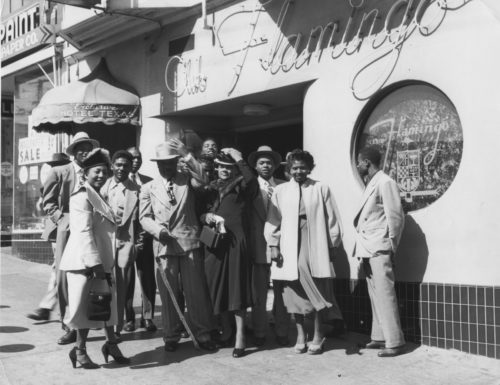 In 1967, amid the frenzy of the psychedelic rock scene, Cesar’s Latin Club opened its doors on Green Street in North Beach. While a student at Mission High School, future bandleader and educator John Santos and his friends used to listen from the street as music filled the stairway to the basement theater. In 1976, club owner/musician Cesar Ascarrunz moved his operation across town to the Mission District. The new Cesar’s Latin Palace sported an elevated stage and sprawling hardwood floors. Wallace recalls playing in Cesar’s band. “This gig didn’t start until ten o’clock and it didn’t end until four in the morning. There were six sets.”

Cesar’s palace launched Bay Area salsa and Latin jazz into the national and international spotlight. West Oakland native Pete Escovedo and his daughter Sheila E. performed there often. So did world-famous headliners like Celia Cruz and Eddie Palmieri. The popular dance numbers now incorporated extended improvisations by skilled soloists, so the dancers could stay out on the floor while musicians improvised to their hearts’ content.

As popular forms like disco and hip-hop vied for attention on the national charts, Bay Area audiences remained receptive to morphing styles of salsa and Latin jazz. For three decades, this musical evolution was epitomized by the Machete Ensemble, led by Santos. 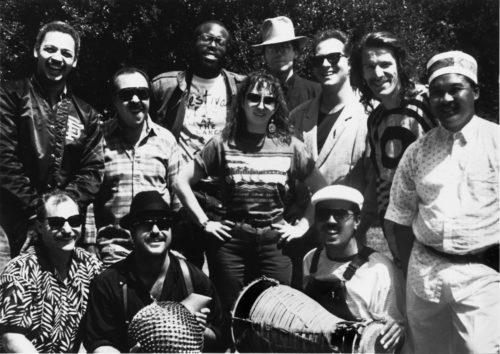 A reciprocal connection with Cuba has long been a vital factor in the richness of the scene. A steady stream of Cuban musicians and dancers have settled here, from pre-revolutionary Cuba in the 1950s to the mass emigration of 1980, and more have come ever since. For their part, a large number of Bay Area musicians and music lovers have made frequent pilgrimages to Cuba and brought back essential musical and cultural knowledge. The exchange expanded in the 1990s, when Oakland-based PlazaCUBA began hosting cultural tours to Cuba, bringing American students together with Cuban music and dance instructors.

Cuban immigrants like dancer Jose Francisco Barroso, percussionists Orestes Vilató and Jesus Diaz, and singer Bobi Cespedes bring authenticity to the Bay Area scene both as performers and teachers. As Vilató says, “In general, not just in timbales, in piano, saxophone, trumpet, the students are very interested in technique, speed. That’s fine. But you have to balance the speed with the heart, with the feeling, con el corazón.”

The dance floor reflects the hybridity of the salsa dance community. “Everybody does salsa, age-wise, ethnic or racial background, whatever,” says Selma Abinader, a regular on the Bay Area salsa dance scene. 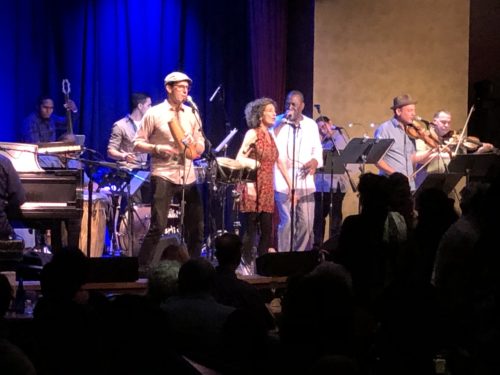 Like many vibrant Bay Area communities, this one is imperiled by gentrification, real estate development, and the growth of the tech industry. Since 2000, nearly two dozen clubs have shut their doors. That means fewer gigs, fewer chances to socialize and dance. How will the music survive?

As a student of the music, my story is typical. Long ago I put aside the steel-string guitar of my youth to pursue an abiding interest in poetry and a career as a writer in the tech industry. Some decades later I found time to return to music. My wife, Ahni, was studying Latin jazz with flautist John Calloway at Jazzschool in Berkeley. We went to La Peña to hear a quintet that featured a Cuban tres guitar. I was fascinated and asked the tresero if he would give me a lesson. He obliged, even lent me an instrument, and I was hooked.

Ahni was playing in a Monday night salsa band class at La Peña led by master percussionist Josh Jones. Soon I joined too. It was my first experience of playing in an ensemble. In 2005 and again in 2007, Ahni and I attended Jazzcamp West, a summer music camp near La Honda. The faculty included Calloway, Santos, Wallace, and many other Bay Area luminaries, as well as brilliant Cuban pianist Elio Villafranca, who took me under his wing. Meanwhile, back at Jazzschool in Berkeley, Rita and I joined a class led by Machete bassist David Belove. One thing led to another.

In 2010, Rita, Ahni, and I traveled to Havana with a group of music and dance students sponsored by PlazaCUBA. We took individual instruction every morning, rehearsed in the afternoon, and hit the nightclubs nearly every night. My tres teacher, Yarima Blanco Ramos, instilled in me an essential ingredient of musicianship: courage. On our return to the Bay, the informal group we’d been jamming with at home performed in public at Temple Bar, a Filipino-Hawaiian restaurant down the street. Our first gigging band, Bahia Son, was born. 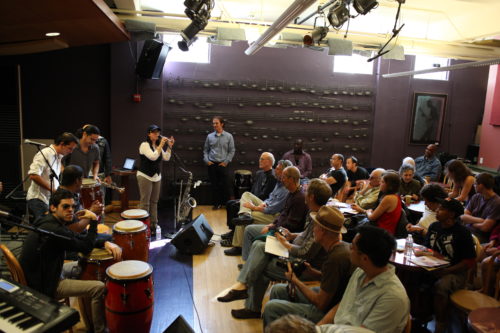 In my experience, music education has opened up many new avenues of communication and connection. It has enabled me to participate in a beautiful, diverse community where differences in age, ethnicity, and background are bridged by a shared passion for a living tradition with deep roots.

Near the end of The Last Mambo, John Santos summarizes his approach to music education this way: “There are a lot of young people and people of different ages who have taken an interest in the history of the music, what it means to our community and how it relates to other musics and other communities, and that is a real foundation that can be built on.”

To my mind it is a point of pride that the Bay Area salsa scene should refuse to die. As I thought about Rita’s film and all the concerts, classes, rehearsals, and gigs I’ve experienced, it occurred to me that the last mambo could last a really long time — as long as the people keep it going, despite everything that is pitted against it. 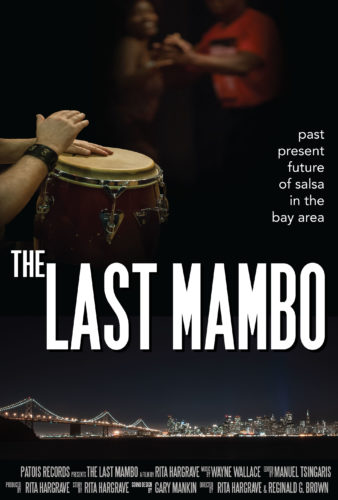