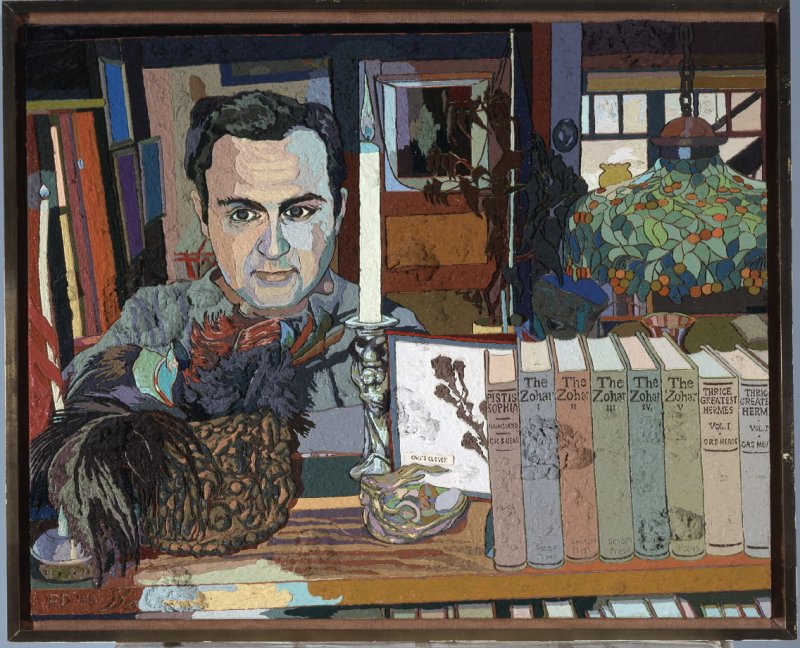 The 1890s Victorian at 3267 20th Street still stands. Having survived the 1906 earthquake and the fire that followed, it endures like an old-growth redwood, containing within its timbers its own concentric record of surrounding environmental change. For more than two decades, this was the home of poet Robert Duncan and his partner, the visual artist Burgess Collins, better known as Jess. They purchased the house in 1967, moving from a rental on the same street, and lived there until Duncan’s death from kidney failure in 1988. Jess stayed on until he passed in 2004, by which time the Mission had already been reshaped by successive waves of gentrification. According to Zillow, the property was initially sold for $1 million that year, and has been on and off the market as a rental unit since. The monthly rent nearly doubled between 2016 and 2017 to $15,000; a ridiculous but unsurprising turn in a market that has warped any standard measure of exorbitance. The house is currently occupied. I wonder about who has lived there since that first sale, and who lives there now. Do they know or care about the “well-known artist and poet” whose “extraordinary home,” per the listing copy, they now reside in? Or is that fact simply a fact; a bit of trivia brought out at dinner parties?

Jess and Duncan have been having something of a moment over the last few years, subjects of a steadily growing body of scholarship, artist monographs, and exhibitions. Notable contributions include Altman Siegel’s 2011 survey of Jess and Duncan compatriot Fran Herndon, curated by Kevin Killian; Siglio Press’s lovely 2012 collection of works-on-paper and ephemera, Jess: O! Tricky Cad and Other Jessoterica; Christopher Wagstaff, co-trustee of the Jess Collins Trust, and Michael Duncan’s (no relation to Robert) comprehensive 2012 exhibition at the Crocker Art Gallery, An Opening of the Field: Jess, Robert Duncan, and Their Inner Circle, and its accompanying catalog; and the reopening of the former residence of Pauline Kael in Berkeley, filled with fantastic murals by a young Jess, as an exhibition and event space in 2016. More recent entries include Cuneiform Press’s The Collages of Helen Adam (2017), the first published volume of works-on-paper by the witchy grande dame of the San Francisco Renaissance; SFMOMA’s exhibition Mythos, Psyche, Eros: Jess and California, currently on view; and Tara McDowell’s remarkable new art historical study, The Householders.

As its title suggests, The Householders focuses on Duncan and Jess’s home life.  With the same rigor and care Duncan and Jess took with their own art forms, McDowell’s deeply researched and assuredly styled prose lifts the curtain on her protagonists’ cohabitation at 3267 20th Street while elucidating a poetics of the domestic unique to the couple. As McDowell sees it, Duncan and Jess’s project of making a home together was the crucible for all of their creative and social activity; across a relationship that contained mixed attempts at joining forces, homemaking proved to be their most generative and lasting form of collaboration. She notes that Jess was taken with James Joyce’s concept of “indwelling,” in which the work becomes a shared space for both artist and viewer to inhabit. This notion carried over to his and Duncan’s physical dwelling, as well. Much like Jess’s overarching approach to his “assemblages,” in which Victorian and pop cultural disjecta were grafted so as to bear fantastic fruit, his and Duncan’s devotion to their home became a material reflection of the couple’s interests, their creative practices, and their friendships — “a dialogue of presences,” to borrow Jess’s own description of his art.

“Jess: Mythos and Memories,” held at SFMOMA on Thursday, September 12, (in conjunction with Mythos, Eros, Psyche: Jess and California) offered its own dialogue of presences between the panelists — several of whom have been integral in orchestrating and sustaining the aforementioned revival of interest in Jess and Duncan — and members of an audience that skewed generationally older. Wagstaff and McDowell, who served as the evening’s moderator, were joined by poets Michael Palmer and Joanna McClure; they, along with Wagstaff, also knew Jess and Duncan. A small framed photograph on Jess sat on a side table to Wagstaff’s right, a welcome touch of the domestic within the sterile surroundings of the Koret Education Center.

The ensuing series of anecdotes, readings, and recollections underscored how memory is itself a kind of assemblage, a process of salvage and recuperation — to borrow one of McDowell’s summarizations of Jess and Duncan’s working methods — across a ground shaped as much by personal investment and subjective lacunae as by larger, structural forces.  Those who witnessed events firsthand can return to the scene through a kind of reverse engineering; those who came after must do so second-hand. Both modes of encounter involve a kind of echolocation: we can’t see the thing being remembered directly, but must gauge our distance from it through a different register, other senses. 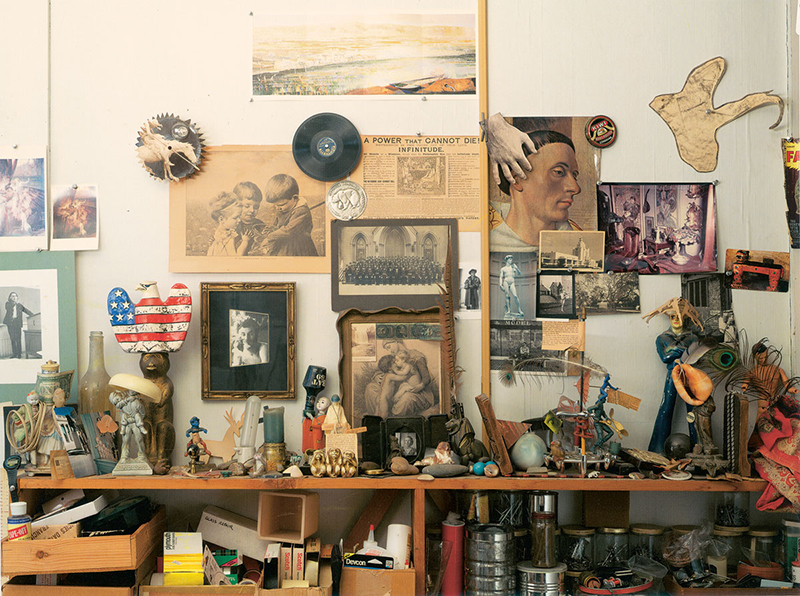 Both McClure and Palmer spoke fondly of the many times, as young artists cobbling together a life in San Francisco, they were taken in by the more established couple. Meals were Jess and Duncan’s preferred form of socializing, and a kind of shibboleth for those who sought entry to their domain. Worldly and experimental in his approach, Jess took pride in his talents as a chef, even going so far as to request of his alma mater, the San Francisco Art Institute, that he teach a cooking class there. McClure noted that occasionally one saw the flipside to this largesse when Jess and Duncan decided to ice out someone for their trespasses, whether perceived or real. As Palmer recalled, “Duncan protected Jess from psychodrama, but he also protected himself from psychodrama.” They were, in McClure’s words, of a “united opinion […] intimidating.”

Many of these anecdotes also appear — at times, almost verbatim from the same sources — in McDowell’s book. What makes The Householders such a pleasure is its embrace of scholarship as an act of careful rummaging. This is all the more appropriate when the archives being combed through belong to two artists whose own work so obsessively mined marginalia. It was funny, then, to witness those moments in the evening when the thread of conversation snagged on the persistence of a particular detail. Jean Connor, Bruce Connor’s widow, recalled the specific kind of glue Jess recommended that her husband use for his collages: the homonymic Yes brand. Or, in detailing how Jess and Duncan were not the tidiest housekeepers despite their natural élan for decorating, Palmer detoured into a humorously macabre incident in which Duncan obliviously knocked over his dialysis bag mid-lecture at City College, not noticing until a horrified student retrieved the vessel off the floor.

Undoubtedly, the incident can be read as a testament to Duncan’s famous intensity of focus, but the scene’s visceral abjectness can’t be ignored, as exemplified by McDowell’s slight stumble in getting the conversation back on track to the subject of Jess’s home studio. It’s a reminder too that for all of Jess and Duncan’s towering intellectual and creative achievements, for how much of their lives were constructed across page and canvas, and despite the hauteur projected by their tastefully eccentric design sensibility, they were also real people located in real time and space, with bodies and desires and conflicting agendas. I thrilled, for example, to think that I had followed in the footsteps of one of my creative heroes, when Wagstaff recalled accompanying Jess on one of his many runs for source material at the now-defunct Mission outposts of Thrift Town and Goodwill — frequent stops when I was a green freelancer freshly settling into the neighborhood a decade ago.

Earlier this summer I visited the carefully preserved Parisian home and atelier of Symbolist painter Gustave Moreau. The walls of its small rooms are hung chockablock with the artist’s unfinished canvases and studies, the furnishings a mix of original possessions, period substitutes, and passable replicas meant to approximate what is no longer here. Despite the gray morning light that streamed in from one side of the double-story studio, with its famous helix-shaped staircase — the tour’s grand climax — the cramped surroundings made me feel as if I were trapped in amber, along with everything else. We don’t have a house museum for Duncan and Jess, as appropriate as one might seem for a couple whose “neither bohemian nor bourgeois” (that’s McClure) dwelling was, by all accounts, one of their most fruitful and under-acknowledged creative collaborations. Beyond the physical building’s inaccessibility, it seems fitting that visiting the 3267 20th Street of the householders is an endeavor much like one of Jess’s scavenging missions through a junk shop. One inevitably feels the grain of the archive and must contend with scraps — those gaps, elisions, and multiple versions contained in the accounts of those who experienced things firsthand. Certainly, McDowell makes this sort of excavation both the substance and subject of her book. “The meaning appears as the painting thinks itself into being,” Jess once remarked of his “Translations,” renderings of found images often executed in a molasses-thick impasto. So too did the portrait of Duncan and Jess collaged over the course of “Mythos and Memories” materialize from the contributions of those gathered together, an act of collective will and relinquishment, not unlike a seance.