Jess and the Bubblegum Card 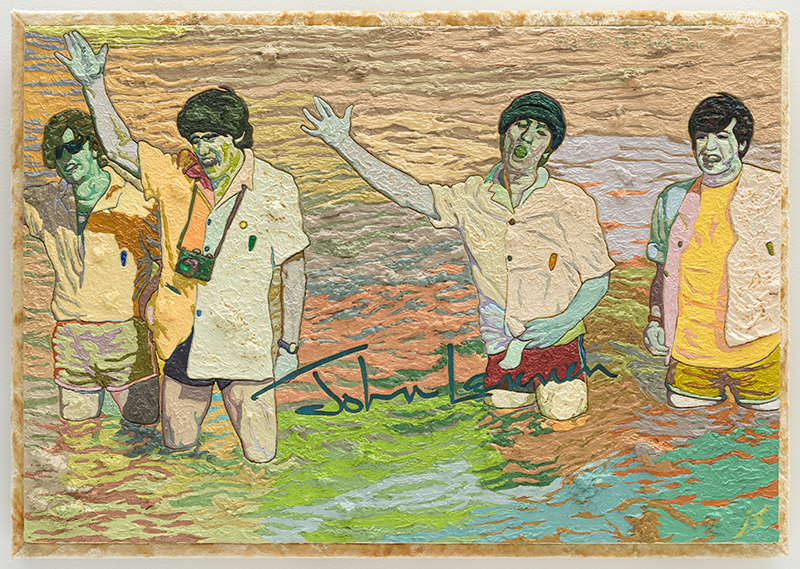 Between 1959 and 1976, Jess created the Translations, a series of thirty-two paintings copied from found images and executed in delectably thick impasto. His sources varied widely, from contemporary photographs to scientific illustrations, historic artworks, ancient artifacts, and images from popular magazines. For Translation #15, Jess reproduced a black-and-white “bubblegum card” of the Beatles, transcribing each detail of the original photograph with remarkable fidelity while applying a hallucinatory palette of his own devising.

By the time Jess finished this piece in 1965, the British Invasion was in full swing and the Beatles were a runaway sensation, following a wildly successful US tour the year before. The bubblegum card captured a new consumer-friendly music culture forged in no small part by Beatlemania. Translation #15 marked an early transfiguration of these pop stars and their media circus into a work of art.

Jess’s rendition of the Fab Four paralleled New York’s emerging Pop Art movement. His meticulous replication — down to the ripples of ocean water and John Lennon’s signature — aligned with efforts by Andy Warhol, Roy Lichtenstein, and others to commandeer the countenance of popular culture. Only three years before Jess made Translation #15, Warhol had exhibited 32 Campbell’s Soup Cans (1962) at the Ferus Gallery in Los Angeles, introducing many West Coast viewers to an aesthetic siphoned from retail and marketing. Jess’s selection of a bubblegum card was consistent with Warhol’s tendency to reproduce what was already commercially available and widely recognizable.

Jess’s parallels with Pop did not go unnoticed. In 1963, the Oakland Art Museum (now the Oakland Museum of California) and the California College of Arts & Crafts opened Pop Art USA, one of the first exhibitions dedicated to the movement. Among contributions by James Rosenquist, Robert Indiana, Mel Ramos, Warhol, and other seminal Pop artists was a collage by Jess, Tricky Cad: Case VII (1959), in which he reassembled panels and speech bubbles from the comic strip Dick Tracy. Like other works on view, Jess’s collage drew from what John Coplans, the exhibition’s curator, described in the catalog as “the most thoroughly- and massively-projected images of our time.” Jess’s preferred collage materials included many of the day’s glossiest magazines — Vogue, Harper’s Bazaar, Look, Horizon, Apollo, and especially Life. In this instance, he called on an even more popular source: the Sunday funnies.

Tricky Cad, however, did not quite fit in with the rest of Pop Art USA. While other pieces mimicked the flare of advertising, Jess’s work was notably understated. Warhol and Ed Ruscha’s paintings were six feet tall; this collage was only nineteen inches. Many pieces were bright, even garish; Tricky Cad maintained the low-contrast gray of newsprint. Jess was baffled by his inclusion. “That was a mystery to me,” he told the curator Michael Auping, who related the exchange in Jess: A Grand Collage 1951–1993: “[T]o this day I don’t feel much kinship with that movement.” The difference was a matter of temperament. “I’m afraid I’m too romantic,” Jess declared, “or perhaps worse yet, sentimental.”

Tricky Cad, like Translation #15, is delicate and textural in a way that defies Pop’s slick and simplified surfaces. Their swirling, impressionistic treatments evoke emotional states more than commercial merchandise. The sinuousness of Translation #15 lends the painting a dreamy quality, and the way Jess reconfigured text in Tricky Cad — “three longers later on the count of three,” for example — is surreal and poetic. 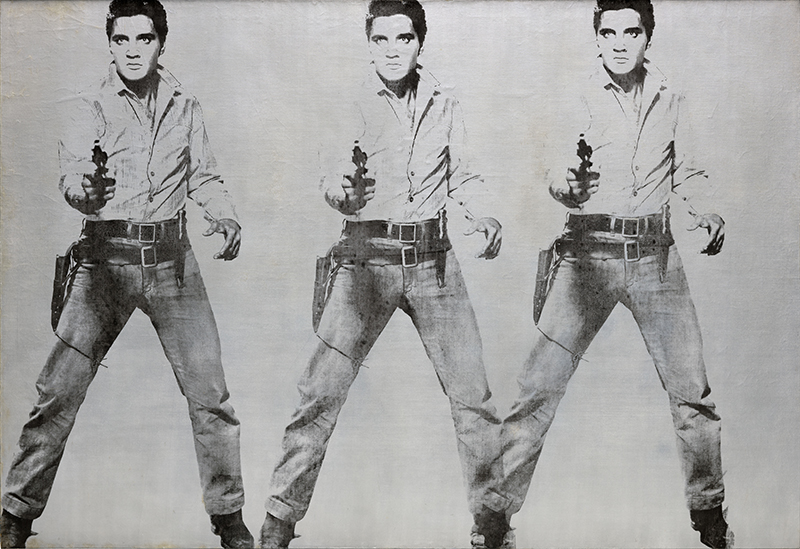 Jess was interested in what he often called “indwellingness,” the deep and hidden dimensions of the creative process summoned through careful and quiet reflection. Much like William Blake, Odilon Redon, and other historic Romantics, he conjured the mysterious workings of the artistic psyche — a psyche that Pop artists rejected in favor of consumer culture’s contrivances. His unusual confluence of popular sources and romantic treatments activates an altogether different approach to appropriation, one that inverts Pop’s prevailing tendencies and reveals a different vision of modern culture. Compare, for example, Translation #15 to Warhol’s iconic painting Triple Elvis (1963). Warhol excerpted the figure of Elvis from a publicity still for the movie Flaming Star (1960). In the original image Elvis appears in full color, but Warhol reduces his version to black and silver. Simplified to the duotone of television and multiplied three times, the figure of Elvis takes on the quality of a grainy reproduction. In Translation #15, Jess reverses Warhol’s method of distillation, adding complex shades of lavender, orange, and teal to a black and white source image. The bubblegum card consists of a printed halftone, but Jess applied his paint in thick, three-dimensional strokes and framed the work in furry velveteen. Jess injects the Beatles with additional enchantment, like a flavor enhancer or ocular additive.

Jess not only built on his sources — he also built out their networks of reference. Pop artists often omitted the context around their appropriations, giving precedence to immediate visual effect. “I just pass my hands over the surface of things,” Warhol famously stated. Jess, on the other hand, stuffed his paintings with allusion to history, religion, antiquity. Throughout the Translations he summons a vast network of references: from Socrates to Finnegan’s Wake, the Kabbala, dancer Fred Herko, and the eccentric millionaire Mrs. Sarah Winchester. On the back of each painting he included a corresponding text, naming sources as varied as Plato, William Wordsworth, and Gertrude Stein. For Translation #15, Jess inscribed lines from Edward Lear’s nineteenth century rhyme “The Jumblies.” The passage corresponds both to the image of the Beatles wading in water and to the colors with which Jess reimagined them: as the Jumblies set sail in a leaky sieve, “their heads are green, and their hands are blue,” and “the water it soon came in.” By incorporating the bubblegum card into this sweeping and unusual canon, Jess enacts a proto-Postmodern pastiche in which a dizzying cross-section of culture is brought to bear on its latest icons. 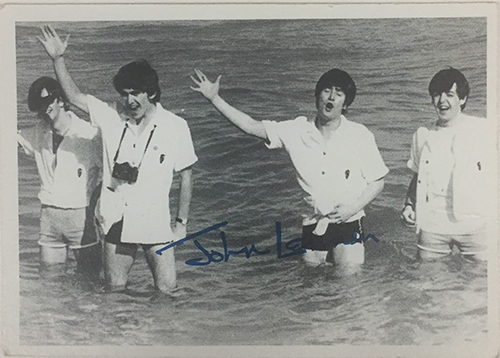 As with Warhol and his New York peers, Jess understood mainstream culture as a magnificent illusion. But where Pop emphasized its surface-level seduction, Jess used his imagination to reconfigure its spectral universe. Like the devotees of The Lord of the Rings who write their own fan fiction, 1 he embellished the cultural artifacts that drew his interest. In this way, the Translations were a part of “the process of creating a world,” as his partner, the poet Robert Duncan, wrote in his introduction to Translations — a process in which “each work of art is a seed of art.”

Consumer capitalism is sometimes called a phantasmagoria — a theater of phantom imagery projected onto the world as in an epic dream. Commodities like the bubblegum card are described as fetishes: talismanic objects capable of suspending reality. The eerie, expressive, and elliptical treatment of the Beatles in Translation #15 conjures this phantasmal quality. In his private writing, Jess even described the Translations as “a total spell.” It is as if the artist painted in a state of lucid dreaming, adorning the same illusion in which he found himself.