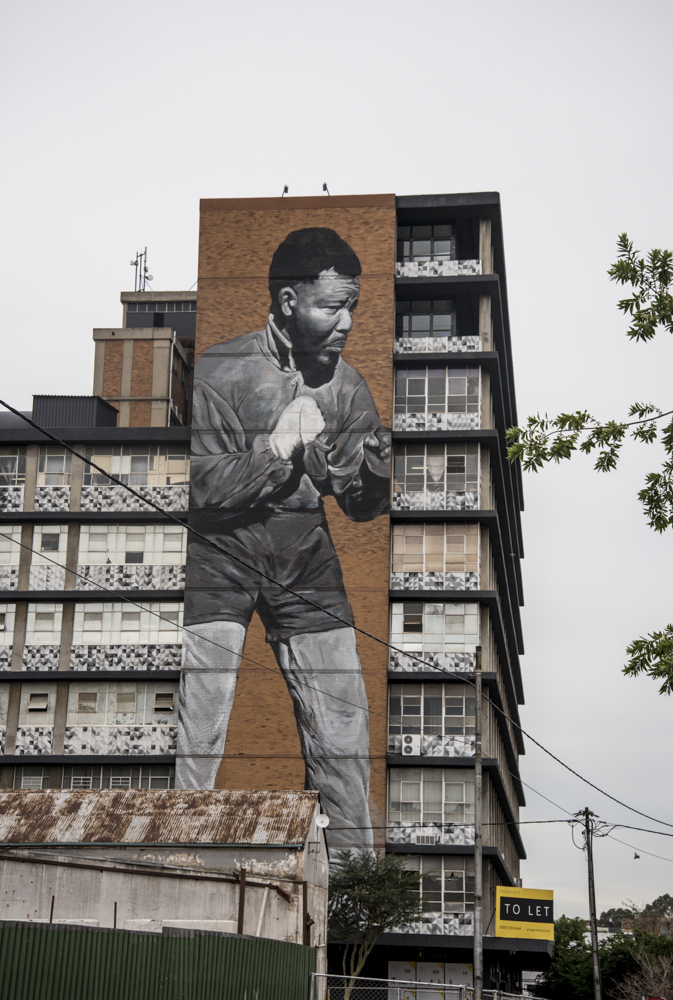 A trip to the City. We are going to Minnesota Street to see photo portraits by Lewis Watts at the Rena Bransten Gallery. Each portrait is an iconic image of a Black cultural hero. Most are posed against flat backgrounds, the subject gazing directly into the camera — but two of the portraits are photos of photos.

One depicts a ten-story brick building in Johannesburg bearing a huge black-and-white image of Nelson Mandela in sweats, his fists wrapped, shadow boxing. The other is a close-up of James Baldwin, who stares out at the viewer with his usual passionate intelligence. This photo is of the back cover of a library book, If Beale Street Could Talk, so that image — photo by Jill Krementz — is greatly magnified. The two conceptual works demonstrate Watts’s relaxed attitude toward photography; he does not fetishize his own technique, but uses whatever thematic images strike his eye and re-contextualizes them within the rest of the series. Lewis Watts, back cover portrait of James Baldwin by Jill Krementz, If Beale Street Could Talk, from the Oakland African American Library, 2019

Along with Mandela, Baldwin, and the historian and literary critic Henry Louis Gates, Jr., the subjects include both Black cultural elders and younger artists such as photographer Erica Deeman and painter Christopher Burch. Their facial expressions and body language are variously good-humored, serious, and proud. They convey determination. In one way or another, they seem to say, “I am here.” The portraits tell a long story in a short set of images. From the ancestors to the new generation there is a continuity that gives strength. Despite everything, there is an opening, a way to go through. On our way outside we noticed a sign for a show called Roman Women, which turned out to be at the Altman Siegel Gallery, a block up Minnesota Street. Having just been in Rome we were intrigued.

Roman Women is an installation by Sara VanDerBeek. Each work comprises a photo image of statuary — a head, a torso, two faces — dye printed in saturated hues of fuchsia, violet, peach, lavender, lapis, sky blue, and yellow, on aluminum or Neoprene, mounted on Plexiglas, wood, or foam, and cut into various shapes, such as a cylinder leaning against a wall. The women might be goddesses or empresses, or at least very rich. They are utterly impassive. We have no way of knowing them. Yet they seem to possess knowledge we can only wonder about. By conflating Roman antiquity and digital aesthetics, VanDerBeek makes us aware of the gargantuan, seemingly unbroachable gap between the two eras. Who are these women? How did they live? What do they possess that they can reappear so spectacularly in our 3D-printed, Day-Glo world? Somehow, through feminist affirmation and tech savvy, VanDerBeek brings these mysterious figures from a heroic age all the way across into the shimmering surface of the transitory present. On our way from the Lewis Watts portraits to Roman Women, we came upon a low concrete wall on which someone had plastered a photocopied poster with a handsome photo entitled “Kevin Killian,” and in subscript, “A True Visionary and San Francisco Hero, 1952–2019.” Like so many others, I counted Kevin as a friend. It was strangely exciting and entirely appropriate to see him honored in this grassroots way. For years an important figure on art and literary scenes from coast to coast, Kevin has abruptly entered the realm of legend. 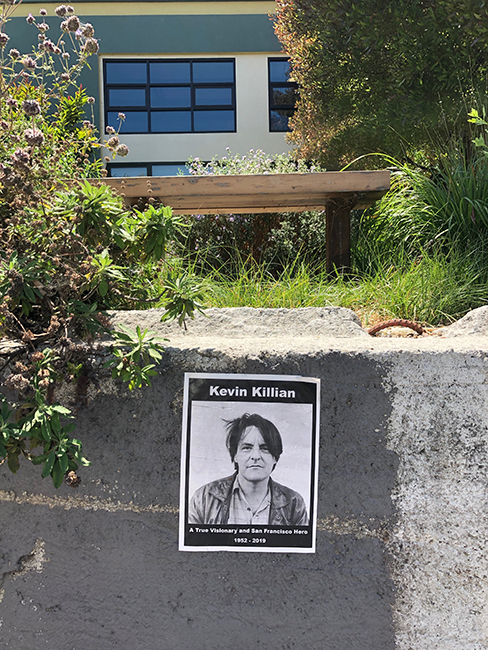 A poet, novelist, playwright, publisher, scholar, critic, impresario, and man-about-town, Kevin was wicked smart, funny, generous, gracious, and kind. He and his wife and soulmate Dodie Bellamy published scads of emerging writers and artists in their long-running DIY zine Mirage #4/Period(ical) and co-edited the anthology Writers Who Love Too Much: New Narrative Writing, 1977–1997. He wrote, directed, and starred in his own casual, witty, name-droppy version of Poets Theater, deploying legions of friends and associates onto pop-up stages and delighting audiences for more than thirty years.

With Lewis Ellingham, Kevin researched and wrote the biography of Jack Spicer, Poet Be Like God, and with Peter Gizzi edited Spicer’s selected poems, My Vocabulary Did This to Me. Kevin was an ardent champion of the LGBTQ+ community, yet he was totally ecumenical in his support for innovative writers of every stripe. I could go on, but there have been and will be many accolades. A memorial event at SFMOMA in August drew an overflow crowd of nearly four hundred.

Driving back to the Bay Bridge along Third Street, crammed with construction and traffic, past the new Chase Center, where the Golden State Warriors will soon entertain their corporate benefactors, I considered the iconic images we had seen. There is a thread running through them, a coursing vein of vitality and optimism that animates our sense of the City. The Black portraits, Roman Women and, in his new incarnation as cultural icon, Kevin Killian, all project a strong feeling of nobility, courage and — hell yeah — possibility.