Series Poet Be Like Kevin Killian
Poet Be Like Kevin Killian
Series
Organized by The Editors
On June 15, 2019, the Bay Area suffered the tremendous loss of Kevin Killian, a renowned and deeply loved poet, playwright, novelist, critic, and teacher — among many other things. A central figure of the New Narrative literary movement and a longtime lynchpin of San Francisco arts and culture, Kevin inspired countless people near and far with his spirit, intellect, and generosity. Here, we gather remembrances and tributes in honor of this singular individual, and the legacy he leaves behind. 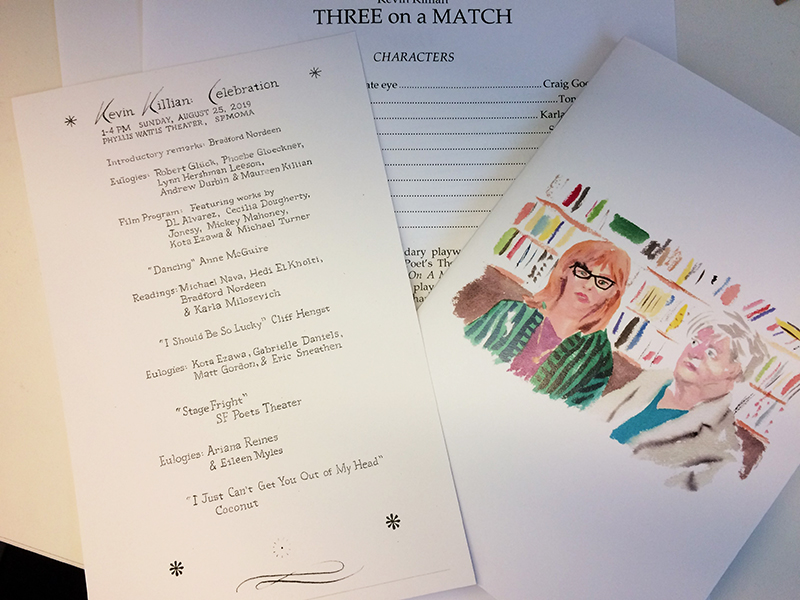 To really take you to the San Francisco celebration of Kevin Killian, we’d need a ready-for-Hollywood script and a team of Lifetime’s best actors. Maxe suggested we model this essay after Kevin’s reviews of the Oscars; the event was certainly crawling with stars. Imagine a poetry version of Cinecittà before it became a theme park.

Like his life, this celebration was high art punctuated by erotica, camp, and four-hundred people in Goth daywear. We overheard Laura Moriarty call it the Poetry Oscars; Maxe said it was like going to queer church. Artists flew in from Berlin, New York, everywhere — enough to pack SFMOMA’s Phyllis Wattis Theater, with people left sitting on the floor and in the aisles, and a full spillover room upstairs with a livestream. In other words, it was just as Kevin would have wanted — a highly-attended social event shot through with queer pathos.

A few days later, we emailed with Dodie — just checking-in, but all correspondence from Dodie is elevated (see: her entire career). After we worked out plans to get together, we read a tribute to Kevin that she’d posted on Facebook. We’ve delighted in pieces about Kevin as they roll across the internet: the ones by his close friends are the most intimate and thrilling, then the pieces by people who knew him a little and loved his work, and of course the ones by people who mainly talk about themselves. The August 26 fête at SFMOMA was somehow representative of all of these things: intimate, far-reaching, full of friends, peers, and acolytes. It’s impossible to encapsulate the life of an artist like KK, who moved through so many worlds. The memorial succeeded by exploring his vast orbit while holding him close to home.

Robert Glück described their forty-year friendship, their collaborations, and his devastation at this personal loss — but also his devastation as an artist, losing Kevin’s “singular consciousness” in the world. At that he grew emotional and paused. It killed me. He went on to describe Kevin helping him with his archives, the two of them at OfficeMax (a buddy film we would eagerly watch), and this gem of a proposal from Kevin: “Bob, I have an idea — let’s write a story together, both of us completely naked in a room.”

Our favorite Kevin story by far came from his younger sister Maureen. Apparently, as a child Kevin already referred to himself as “Kevin ‘The Biggest Gossip’ Killian.” He even produced his own celebrity gossip publication, The Midnight Tattler. How did young Kevin source tawdry gossip in his pre-internet Long Island childhood? Possibly he just made it up, like Kenneth Anger did in Hollywood Babylon. According to Maureen, he even placed copies conspicuously on the racks at the 7-Eleven where he worked! Though — in another parallel to Anger — no one ever bought it. 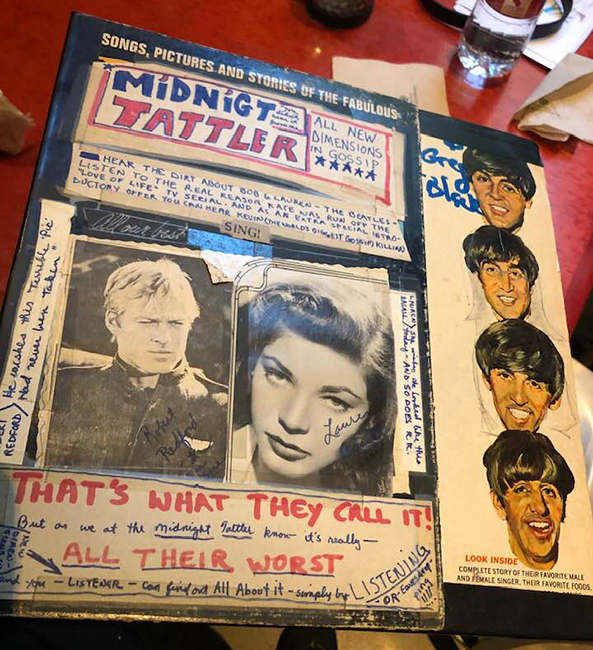 The Wattis Theater’s institutional formality felt like a mismatch at first, but it was made for watching film. The organizers presented work by D-L Alvarez, Cecilia Dougherty, Kota Ezawa, Jonesy, and Mickey Mahoney. Michael Turner’s An Interview With Kevin and Dodie (1999) was a ten-minute silent portrait of the two of them; a meditative, single take of their faces. It must have been one of their most magical years, Kevin’s face so serious and Dodie at ease in her beauty — deified countenances, like Barthes said of Garbo.

The scene inside the theater became its own production: friends brought in little coffees for each other, a “Reserved” sign eventually made its way to the back of a poetess’s blouse, and unlikely pairs huddled in conversations.

We sat in the front section, to the right of the room, bookended by friends from New York. It felt like our two lives, split between coasts for so many years, had finally merged. Other people must have felt similarly given the conflation of scenes and eras. To the left of the stage you could glimpse the next speakers in the lineup. Phoebe Gloeckner began her eulogy off-kilter, flustered, dropping F-bombs. Karla Milosevich read two of Kevin’s Amazon reviews, including one where he waxes rhapsodically about Advil.

Lynn Hershman Leeson read sections from an email exchange with Kevin. She’d sent him a note about an obituary he’d written for Lutz Bacher and suggested he might write hers. He couldn’t, he replied: she was sure to outlive him. It sounded like something Kevin would say in a self-demurring way, but as she continued, we understood he was writing apologetically about his own prognosis. He told her at one point that things were not going well but, “something of the beautiful has been mixed up with the bad — like a Vincente Minnelli melodrama.”

So too was the celebration. But which Minnelli? Maxe says Meet Me in St. Louis, but set at SFMOMA and we’re all Judy Garland. Diana thinks it was more Two Weeks in Another Town, but she’s partial to Cyd Charisse. Realistically, it’s Tea and Sympathy that brings all the attending worlds together: a room of sensitive prep school boys sharing tea with Deborah Kerr.

A reading of Kevin’s play Three on a Match gave us Cliff Hengst as Federico Fellini and Laurie Reid as horror diva Barbara Steele. The cast took the intertextuality to supernatural heights, reminding us that Kevin’s approach to Poets Theater was designed as cult practice, with ritual and ceremony open to everyone who wanted to join. This performance underscored the extent to which his plays are site-specific love letters to the environments in which he worked.

Kevin’s favorite diva Kylie Minogue was present — conjured through live performances by Cliff Hengst; Anne McGuire accompanied by David Buuck on piano; and at the very end, Coconut — MTV Unplugged-style — playing “I Can’t Get You Out of My Head.” Cliff got the audience to sing along to “I Should Be So Lucky”; David opened a can of Tab (Kevin’s favorite) and sat it on the piano for “Dancing.”

Throughout the day, Kevin’s words — as animated by the New Narrative originators in particular — put into perspective just how much work these artists and writers have already done to remember one another. Lynn called to this when she described, “obituaries and eulogies as a way or life, or at the very least, a reminder of how to be remembered.”

Kevin was purposeful about his legacy — we see this in his attention to archive, the emails he sent and intended to send at the end, his lovingly tended friendships. In his great San Francisco poem, “Eyes on the Prize: Maxime Le Forrestier,” read by Hedi El Kholti, he sums up his entire, astonishing life. The final stanza:

And Dodie, Dodie Bellamy, the femme divine,
upon whose coattails I hooked my stars,
together like one of those old couples we used to see,
Jess and Duncan, George and Mary Oppen, Simone and Etel,
Liza et Luc — Sylvia, attendez-moi.

In their closing eulogy, Eileen Myles kept repeating the word here, insisting on a specific time and place, even as they connected their own memories of Kevin across decades. Memorials always necessitate a kind of time travel: the simple refrain of here grounded us in a place where we could continue to hold Kevin.

At the end of the memorial, groups congregated outside. There was crying and hugging, we ate cake — “man with stars,” the receipt read. We gossiped afterwards, mixing the good with the bad, grief in repetition like a Kylie Minogue hook, in tribute to the cinematic scope of Kevin’s life. Wow, like Kevin always said, Wow wow wow. 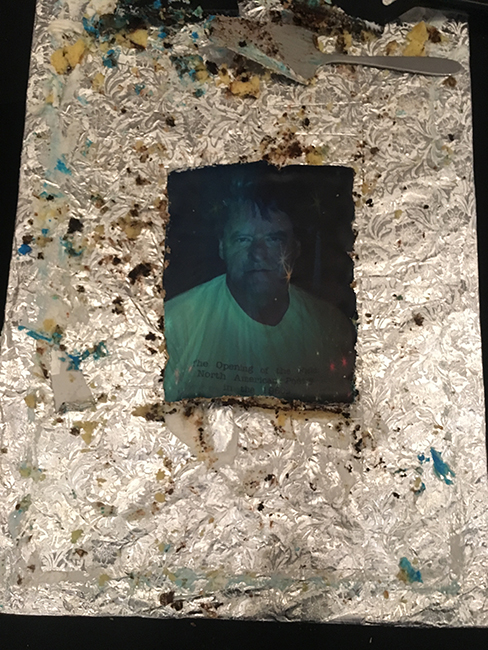