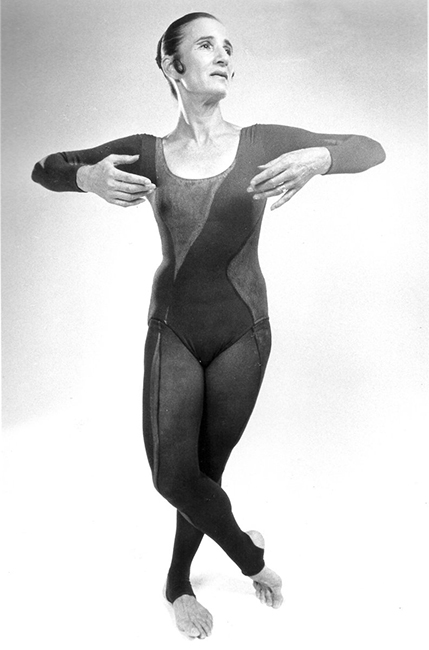 As I write this in mid-July of 2019, choreographer and dancer Bella Lewitzky has been dead for fifteen years. Her legacy in Los Angeles is sprawling, her life story woven tightly into the fabric of Southern California dance. She ran a company here for thirty years, founded the dance department at CalArts, chaired the dance department at Idyllwild, and famously refused to answer questions about her political affiliation to the House Un-American Activities Committee in 1951. To trace her trajectory is to flesh out a particularly local dance history. It is to imagine her body crisscrossing Southern California’s physical landscape for much of the twentieth century: born at an Antelope Valley utopian socialist community, moving to San Bernardino and Elsinore, working in Echo Park, the Hollywood Hills, Idyllwild, the CalArts campus in Valencia.

When I moved to Los Angeles in 2010, Lewitzky’s was a name I knew, but barely. Lately, it’s been surfacing persistently. Filmmaker Bridget Murnane is working on a documentary called Bella, Citizen Artist, often posting fascinating archival materials on social media. Lewitzky’s choreography was recently reconstructed in conjunction with an exhibition at the Skirball Cultural Center celebrating her frequent collaborator, costume and clothing designer Rudi Gernreich. And this October, L.A. Dance Project, a company directed by dancer and choreographer Benjamin Millepied, will perform Bella Lewitzky’s Kinaesonata. It has been re-staged for LADP by a former member of the Bella Lewitzky Dance Company named Walter Kennedy; in April, I watched him direct an open rehearsal of the dance’s first two movements in the LADP studio just south of downtown Los Angeles’s Arts District.

Set to a piano sonata by Alberto Ginastera, Kinaesonata is cleanly geometric, a sturdy and confident choreographic construction. The first movement begins with six dancers, three standing and three kneeling, arms gently but precisely curved. For the most part, they push through space with a bold muscularity. At times they skitter and hop; at times they land split-legged leaps heavily — unabashedly weighty bodies meeting the floor. When the dancers find stillness, it’s never rest, but decisive shape-holding. Often these holds come straight out of turns, one of the dance’s many brutal technical imperatives.

The existing remnants of Llano del Rio, where Lewitzky was born.

Peeking through Kinaesonata’s most challenging moments are ghostly hints of Horton technique, which Lewitzky developed with her mentor, Lester Horton, starting in the 1930s. In particular, the T-shaped body: one leg grounded and the other forming an uncompromising line with the torso and outstretched arms, all held parallel to the floor. The Horton/Lewitzky body calls attention to its architectural possibilities, especially in moments of physical contact. When a dancer is lifted or supported in Kinaesonata, it’s strikingly different from methods of weight-sharing that revolve around release, the pouring of weight into another’s body, lightness achieved through surrender. In Kinaesonata, partnering requires strength and tension: there’s an arresting moment in the second movement, for example, in which a dancer standing fully upright on someone’s shoulders drops plank-like to be caught. She doesn’t melt or drape, just holds shape as she falls.

When Kennedy offers the LADP performers notes, I’m distinctly aware of the gap between mid-twentieth century (“modern”) and early twenty-first century (“contemporary”) dance training. The former marked by an abundance of proprietary techniques: not just “Lewitzky” and “Horton,” but “Limón,” “Graham,” “Cunningham,” etc. The latter much harder to pin down, something the dance world is still puzzling out across registers of experimental, concert, and commercial production. Kennedy addresses this outright, and I have to imagine that translating Lewitzky’s movement to these twenty-first century bodies has constituted much of the work of reconstruction. Coaxing the dancers into a deep “hingey thing,” Kennedy reassures them that it’s “new territory for you,” something “from another time.”

Premiering on the West Coast on August 1, 1970, Kinaesonata was originally performed by a cast of nine , including a fifty-four-year-old Lewitzky. The year after, Lewitzky presented the dance in New York as a part of her company’s first appearance there. Despite her longstanding visibility in the Los Angeles dance world, critics in New York emphasized her “late” emergence as a dancer and choreographer; they also noted her uniqueness as a serious dancemaker working exclusively in Southern California. Like Lewitzky, “discovered” in her mid-fifties by the New York establishment, Los Angeles still lies at the threshold of visibility in the dance world, forever “burgeoning” or “growing.” 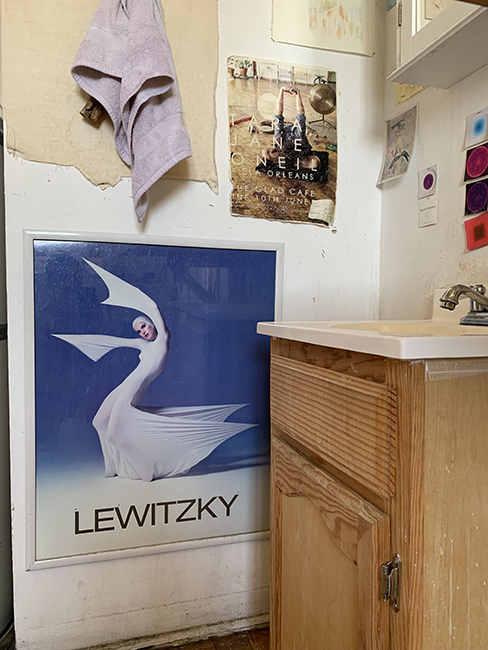 When we say that there was nothing here, that’s not a descriptive but a performative — our language making it so. Since moving here, I’ve spent most of my time dancing at Pieter Performance Space, a studio in Lincoln Heights founded by Jmy James Kidd. At a certain point I noticed a Lewitzky poster hanging at waist-level in the Pieter kitchen. It features a dancer named Claudia Ross in the Gernreich-designed costumes from Inscape (1976), her body an exaggerated S-curve pulled to both horizontal edges of the frame. I asked Jmy where the poster came from, and it turned out it had been rescued from the basement of the Colburn School by Tamsin Carlson, who has taught Cunningham technique at Colburn and at Pieter. That trajectory seems so emblematic to me of dance history, and especially Los Angeles dance history: a beautifully framed photo hidden in a basement, finding its way into a new home, trembling ever so slightly as bare feet make their way in and out of the studio, feet belonging to people with names most of us will never know.