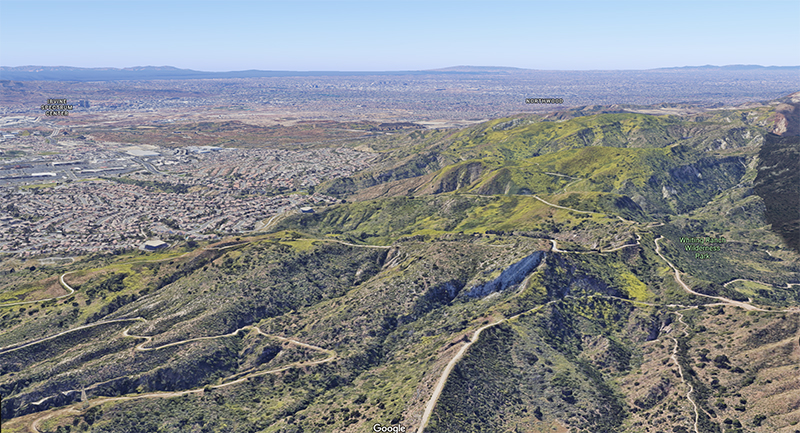 I enter the east side of the park from the lot and climb down into the first valley, the Santa Anas blustering my face and upsetting my balance on the dirt as I descend. I house my Sony PCM-D50 recorder in a janky (but free) handle-less parabolic dish, so most of the recordings start with the fumbling, knocking, and rustling of me situating the mic. Once my prosthetic ear is settled, I stretch my listening as far as it can go with the aid of technology. I note first what is closest to me in proximity: the chaparral brush bending and rustling, the oaks squawking under the weight of air pressure, the flitter of birds struggling against the popping gusts of wind. Above that, airplanes. Behind that, cars on the highway. Beyond those, parched tract housing wheezing in the dry air. But somewhere else — ahead of me unlocatable — a ringing, whining howl.

I shuffle through the index of sounds cataloged in my brain, trying to identify the source. Could it be the sound of the jet engines reverberating in the canyon as they pass over, the pitch shifting because of the air flow? The particular density of the wood throughout the park that lends subtle harmonics to the wind? You can never “hear” the wind — only what it vibrates. 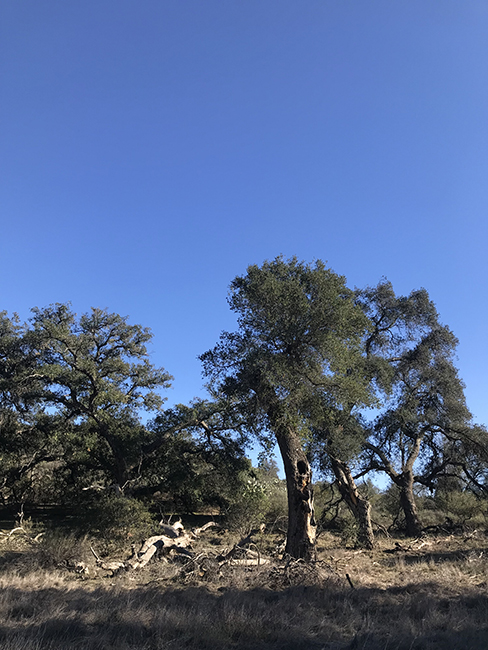 I move forward to an oak grove, where I hear the hollow drone coming from the same direction. I stop at an intersection where mountain bikers pass. A park ranger in a SUV lumbers up alongside me to ask what I’m doing here. With the mic, the parabolic dish, my headphones and all. “Just field recording.”

He frowns skeptically and asks, “For who?”

He drives off. Sometimes I can’t tell if people in uniforms just wanted to be cops or if they really care about something and tuck it underneath their menace. 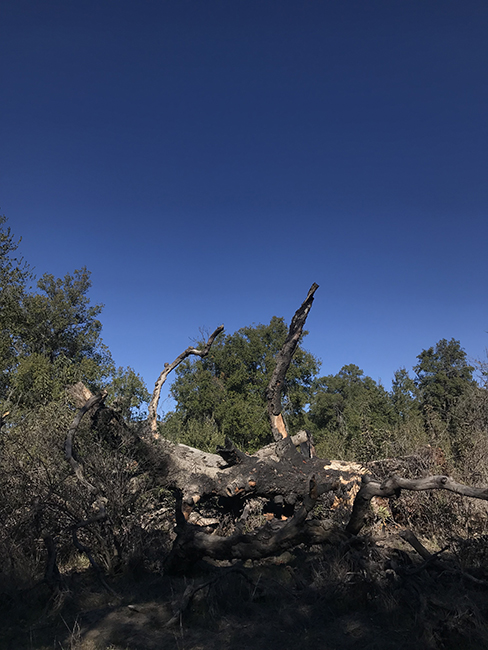 Located in the city of Lake Forest in Orange County, Whiting Ranch Wilderness Park was 90% destroyed by the Santiago Fire in October 2007. Twelve years later, the 2,500-acre park is still in recovery, without much support from California’s recent five-year drought. A former cattle ranch, the park is home to riparian and oak canyons, grasses, reeds, sage, scant and occasional creek water, and steep slopes for hiker, mountain bike, and equestrian use. The Santiago fire, which was ruled an arson, burnt nearly 30,000 acres in nineteen days before complete containment. Forty residential structures and twenty outbuildings were destroyed or damaged, which might have been fewer were there not twenty-nine other Californian wildfires pulling resources at the time. (The dense and hilly park, which has now recovered, probably would not have made it unscathed either way under the initial 100 mph-wind conditions.) These statistics seem, perhaps, paltry in comparison to the gargantuan fires of late — but Whiting Ranch Park is one of the few areas in close vicinity to me that encompasses the friction of protected wilderness, residential development, and Santa Ana wind tunnels and is not, as of this writing, completely destroyed.

I record at a total of eight stations across this landscape, including a stop in a small ravine at the base of an arching slope. Here, I note that the howl presents itself only when I stand up three quarters of the way, and seems unrelated to aircraft overhead. As I crouch, listening in the oak leaves, I imagine some specter of time moving linearly through the canyon — a Santana, a ghost of fires past, present, and future come to torment an imposing species with its houses, highways, arsonists, and its illustrious capacity for careless accidents. A disembodied voice of inevitable future loss and destruction.

As I reach the end of my expedition through the park, I climb to the top ridge to loop back to the parking lot, still not having found my “source.” At a gain of about five hundred feet in less than one hundred yards, I’m out of breath and can’t hear as well for my own panting. I stop, bumble around with my rig among some tall, dry brush, and pan up the hill to follow the now-emboldened warning. Following my ears, my eyes land on a transmission tower positioned at the peak. The wind is vibrating the power lines, creating a resonance which carries downslope. This is the source.

What a curious interdependency. California’s PG&E declared bankruptcy early this year in the face of mounting liability lawsuits related to its faulty equipment — like this transmission tower — which has resulted in numerous fires that have cost dozens of lives and caused immense damage over the past few years. The phantom is less uncanny than I’d imagined, and can be literally interpreted. As I have found many times in my recording practice, there is always a sound of the times.

The Whiting Ranch recordings presented here were made on a high-wind alert day in late December 2018.