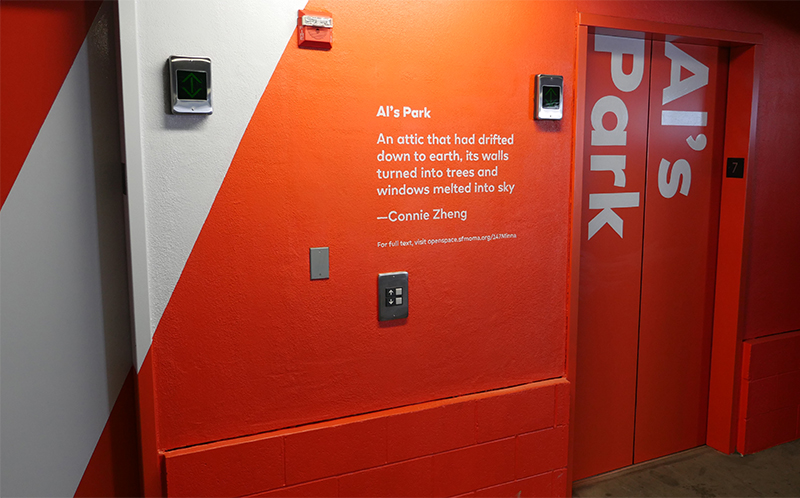 We had broken up nearly a year ago but I still missed you and our walks through the quiet fissures of San Francisco, so I led you up the steps of Corbett and Saturn and Temple and Mars Avenues to sit with me in silence for a few hours. Al’s Park was tucked into the backside of a hill in Corona Heights, like a small hairy dog caught between a pair of couch cushions. It was well-camouflaged but easily identifiable. Its entrance was marked by a Kelly green street sign that read “Al’s Park,” as well as a red bench woven with plastic flowers, the tops of shrubs peeking through from underneath. Two candy cane lawn stakes flanked the sides of the sign, and a birdhouse painted a robin’s egg blue hung above it.

Al’s Park reminded me of an attic that had drifted down to Earth, its walls turned into trees and windows melted into sky. There was a terracotta statue of a wolf, a low wall of bricks, two stained-glass mosaic tables without accompanying chairs, a big pot of azaleas, planters with succulents crawling out, some palatial fountains with blackish pools of water. A few tendrils of pathway snaking between the patches of ivy and lime and apple and fig trees, past a cactus kissing a grapevine; well-kept houses, a swath of the San Francisco Bay, and a bluish strip of Oakland in the distance. We followed one of the more visible paths until we hit a high tangle of bushes and sat on the grass. I hugged you for what felt like an hour and we stayed silent the whole time.

Apparently, the park was public city property, but most of the trees and objects planted in it were gifts from neighbors near and far. The majority of these offerings bore no names or identifications. Every patch seemed to be accounted for yet unclaimed, a gentle celebration of the commons.

That was the last time I visited Al’s Park for several years. I stopped by again a few weeks ago and was dismayed to discover all that remained was the red bench and the sign. Trenches were dug, pipes exposed. A fountain was felled and a crisp strip of sidewalk snaked down the small incline of the park into a fence that warned all trespassers of prosecution. Al’s Park! I moaned in horror, in a small voice. I took a picture and sent it to you and we mourned it together. A Google search yielded only results for the Michelin-rated Al’s Place restaurant and Michael McAnally’s YouTube tour, “Al’s Park is a perfect raw little San Francisco neighborhood park.”