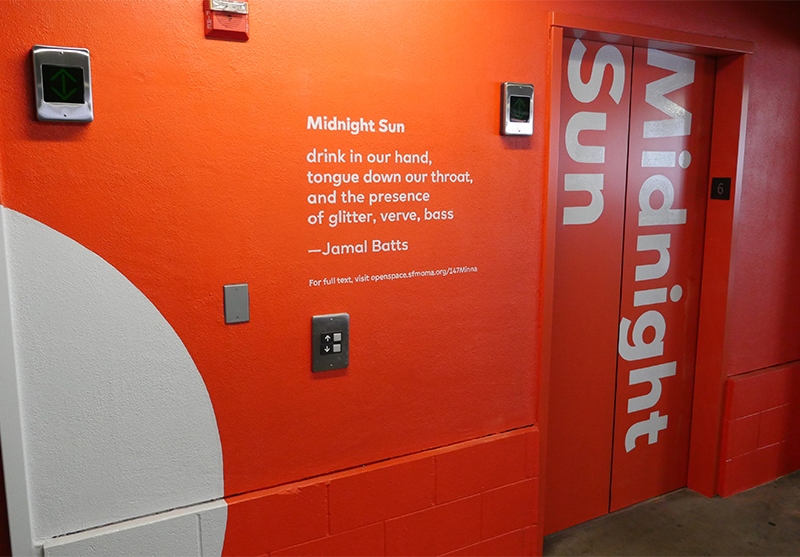 To your right you’ll find a small lounge with couches facing a window looking out on the cable car stop across the street. Behind that, a long bar that meets the back of the club. To your left there’s a row of seating the length of the bar, and at center, a long skinny walkway-dancefloor ending in a stage.

The Midnight Sun provided a temporary haven for me and a bunch of Black queer kin on Monday Nights. For four weeks at a Black drag show commandeered by queen Honey Mahogany, aptly titled Mahogany Mondays, we got our lives in the less-than-inviting Castro.

I thought of the Midnight Sun when I walked into Sadie Barnette’s New Eagle Creek Saloon, a quasi-functional bar cum art installation temporarily planted in the center of the industrial art space The Lab, itself housed within The Redstone Labor Temple. Barnette’s beckoning orb of a bar is dedicated to the memory of her father’s short-lived watering hole, The New Eagle Creek Saloon (1990–1993) — the first Black-owned gay bar in San Francisco. Reimagined in Barnette’s distinct aesthetic, the iridescent “bar” features neon lighting, crystals, holographic paper, and candy painted soda cans and speakers — an homage to the disregarded and their things. When Prince-purple light is cast across the space, and house music blares, the installation speaks of only promise and potential.

On opening night, patrons of the actual saloon formed a chorus of voices echoing through the space, letting us know that the places some now imagine as utopian used to ask for three forms of identification when their Black faces showed up at the door longing for entry.

One such place was the Midnight Sun — which only later would become, by way of Mahogany Mondays, a refuge for me and my friends. For a short time at the Sun, the occasional drink in our hand, tongue down our throat, and the consistent presence of glitter, verve, bass, and revolution on stage made the Bay livable. As Black church elders like to say, trouble don’t last always. Indeed, here, little does.