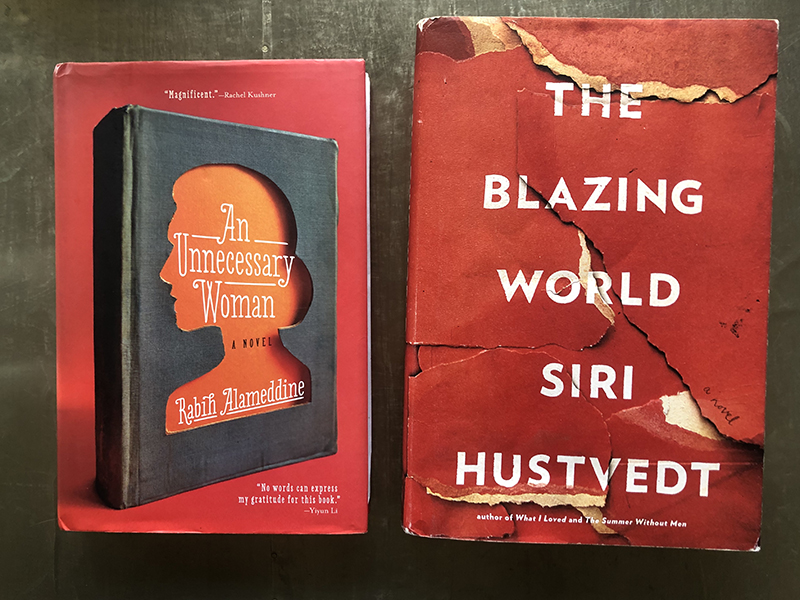 Recently I reorganized my books, or at least the ones with which I have unfinished business. Over the last few years, they have been waiting patiently at home while I have been out in the world, and as I’ve begun to I turn my attention back to them and scan their spines, I have been remembering when I acquired them, how much I identified with them, and how I planned to use them.

Two hardback novels caught my eye during the sorting process, conspicuous because they sat adjacent to one another and their covers are almost the same shade of red with white titles: Rabih Alameddine’s An Unnecessary Woman and Siri Hustvedt’s The Blazing World. They both appeared on bookstore shelves and in my own library in 2014, during a season when I was still going back and forth between New York and the Bay Area (the bookmark in the Hustvedt is from Brooklyn’s BookCourt (RIP), and the one in the Alameddine is from Florey’s Books in Pacifica, CA). I was trying to find my place in the world. I had two disparate desires then: to make my mark by supporting the work of others, and to make things of my own. But I had just taken on a job that, while incredibly fruitful, left no time to work on anything outside of it.

I read both novels that summer as I packed up one home and unpacked another, and, based on the sense of recognition I felt after each book, decided to write an essay exploring the connections and parallels I saw. Hustvedt’s novel is set in the New York art world and Alameddine’s in contemporary Beirut (two worlds, very different from one another, with which I have a passing familiarity). Each book created a rich interior life for its female protagonists — creative and intellectual figures struggling with an existential need to make, to see and be seen. My notebooks for the next several months contain references to this essay I was to write, barely sublimating my own anxieties, about the often fraught public role of women who want to create.

Hustvedt’s fictional protagonist, Harriet Burden, is the wealthy widow of a successful New York art dealer, and more importantly an artist who decides to present her most ambitious work as the work of three much younger male artists as an experiment. The protagonist and narrator of An Unnecessary Woman, Aaliya Saleh, is a seventy-year-old Lebanese woman from Beirut, a lifelong translator of world literature into Arabic, whose prolific output no one has ever read because none of it has ever left her apartment: each text sits untouched and unpublished in a box on one of her shelves.

Both women are brilliant, astute, and erudite. Despite their self-revelations to the reader, they are also effectively in hiding. Clear on the complexity of their relationships to worlds that would be at best indifferent and at worst hostile their work, they conceal their creations and their knowledge from almost everyone. The books traffic in questions about the value and the costs of silence, and explore the power of the imagination to sustain someone when their external reality doesn’t live up to their desires.

I wanted to write about translation and transformation; about yearning and production across contexts. Each character makes work that she keeps hidden as a method of control, engaging in invention and reinvention, dreaming and making, rewriting their lives in secret, not least because men refuse to engage them in serious dialogue about what they are capable of. Harriet Burden describes her ruse with the younger male artists as “a fairy tale in three acts.” She is ostensibly both angrier and more interested in validation than Aaliya, who doesn’t focus solely on her subjugation because of her gender — she is more concerned with the challenges of life in Beirut, especially the legacy of the civil war which makes her world far less stable or predictable.

I wanted to write about these contexts but also about the impact of the staggering range of references in each text (although there is not a great deal of overlap, I noted at some point that both protagonists, for instance, quote Freud and Hegel, and mention Nightwood by Djuna Barnes). For Harriet, texts are source material: she devours theory, poetry, and fiction to feed the art she makes (and that includes many fictional texts created by Hustvedt), whereas Aaliya absorbs and transforms literature and philosophy simply in order to sustain herself. “Literature gives me life, and life kills me,” she tells us. “Well, life kills everyone.”

I wanted to write about the politics of voice. The Blazing World is written in fragments, a style I have always liked. Hustvedt plays with textual forms (published articles, written statements, edited transcripts, notebooks, etc.) and her multi-vocal approach seems both a meditation on the dubious power of a woman’s narrative and a multi-media art work in itself: conceptual art becomes literature and literature becomes conceptual art. Meanwhile An Unnecessary Woman, carried by the powerful singular voice of Aaliya, the self-taught literary translator with blue hair, is written by a man. (Alameddine’s I, The Divine also has a formidable female narrator/protagonist and includes a scene at SFMOMA to do with a Mondrian.)

I’d even begun to assemble quotations from other writers for this essay, from Virginia Woolf’s A Room of One’s Own, Etel Adnan, Simone de Beauvoir, Audre Lorde, and Linda Nochlin’s essay that famously asked the leading question, “Why Have There Been No Great Women Artists?”

But I never wrote it.

Why not? Perhaps I just didn’t have time. Perhaps I thought too long about it. Perhaps I have been hiding too.

Today I find myself grappling with similar but distinct questions from those I had five years ago. While I don’t technically have a room of my own today, it feels as if I do. I have time to think. I have moved my desk at home that used to face the wall to under the window. Now I have an oblique view, and I have watched my neighbor’s tree emerge into green as the spring deepens.

I once thought that I would construct myself solely from books and, through that process, make books of my own. Then I got distracted from that project. It is strange now to stare at my shelves, to see this little library I created over the last two decades, and to imagine that its contents are asking me questions in return, quietly but insistently: What happens next, now that we’re all assembled and paying attention? Shall we begin?