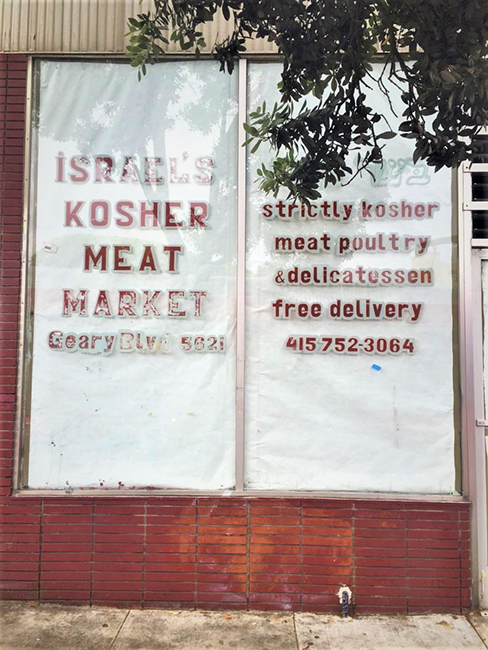 I love neon signs in the daylight and how — photographed from below, without their defensive glow — they seem somehow smaller, more vulnerable. I love the old-fashioned ampersand in ghost signage between two or three buildings where you have to imagine its heyday into existence letter by phantom letter. PAPE_. QU_LIT_ HO_ _L.

Also: the nearly-extinct murals that betray some aspect of the brush and the intention of the anonymous “wall dog” who made them.

Also: painted brick and the evidence of the passage of time — the way that, day after day, the city and the weather get to work making layered art out of advertising. Vinyl letters, on the other hand, appear to have been born all at once. They seem incapable of dereliction? Decrepitude? Degenerescence? Delinquency? 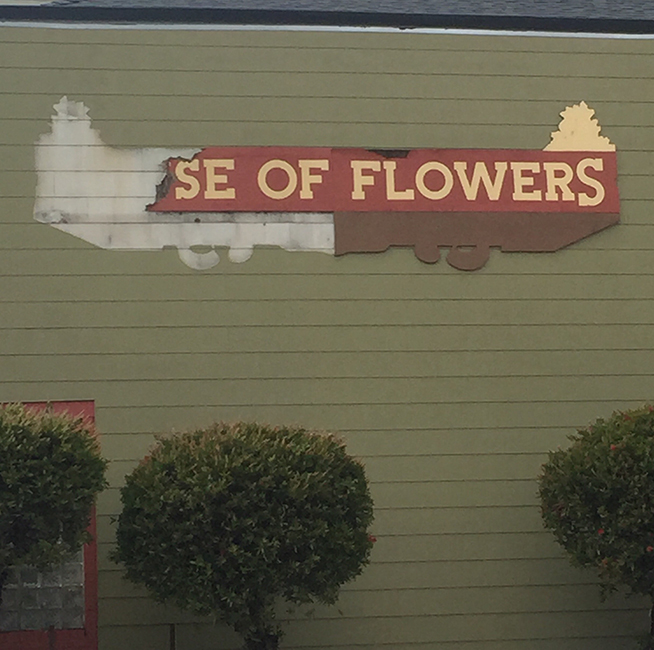 Not long ago, in one of my regular used bookstore rummages, I happened across a slim volume titled Musings on the Vernacular. Published in 1988 by typographer and former Ampersand editor Alastair Johnston, the booklet is a brief tour of a bygone world, full of photographs of hand-lettered signs from the ’60s and ’70s, reproduced matter-of-factly on the page with Johnston’s commentary on typographic trends. (Among his many books on typography, printing, and book arts, I will mention just two: the brilliant Alphabets to Order: The Literature of Nineteenth-Century Typefounders’ Specimens (2000) and Dreaming on the Edge: Poets & Book Artists in California (2016).)

Johnston’s book inspired me not only to think but also to document the rapidly disappearing vernacular signage of my own neighborhood in the central Richmond district of San Francisco, where English often yields to Russian, Spanish, Cantonese, Vietnamese, and Korean; where priests from the Russian Byzantine Catholic Church and the Russian Orthodox Holy Virgin Cathedral (in which a saint is entombed) pass Orthodox Jews and confirmed atheists in the shadow of Buddhist temples. 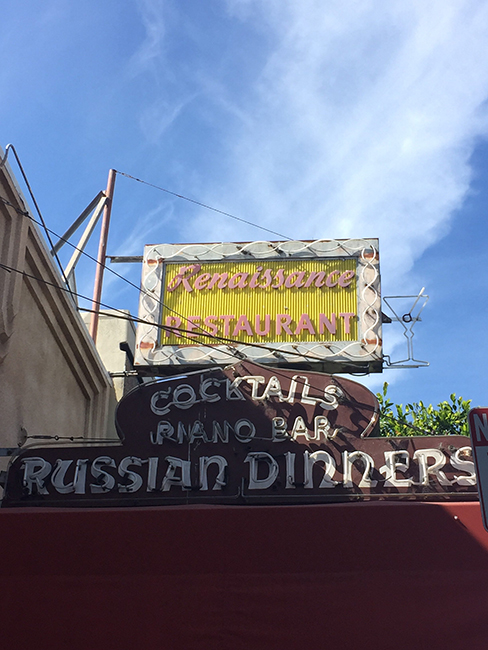 As the dim storefronts with one-of-a-kind hand-lettered signs give way to new restaurants and chain stores with identical waterproof branding, everywhere begins to resemble everywhere else. Bright, open, empty for business: Welcome to Hellvetica. It gets more complicated when you consider that there is variation in the sameness, too, and sameness in variation. Sometimes you stare at a third- or fourth-generation sign for yet another defunct establishment, straining to distinguish between the faintest trace of lettering, whispers of painted-over graffiti, and pure rust, and wonder how much of sight is suggestion. 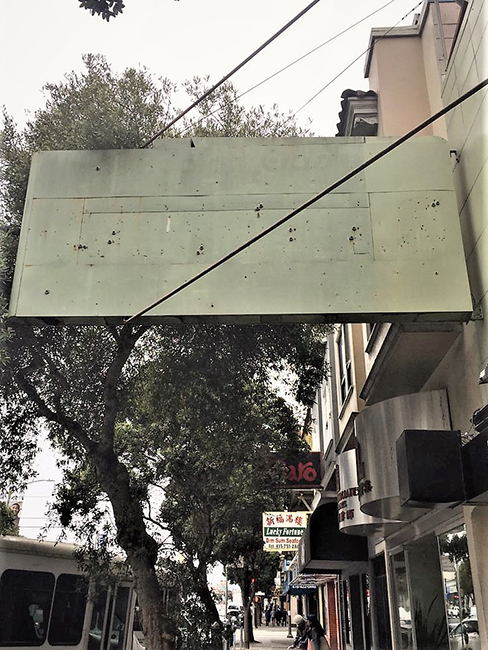 As the cheap new signage fades and the past reemerges, these lives appear to briefly coexist — both the rugged original and the hasty superimposition. Battered by sun and wind and rain, the vinyl peels to reveal well-formed letters from the heyday of racetrack gambling, when racing forms were sold in corner stores. The heavy blade signs for bars and SRO hotels now rusting in the Tenderloin remind us that this neighborhood was once home to generations of sailors, musicians, and sex workers — as well as the quick eats and cheap rooms that sprang up to cater to them. 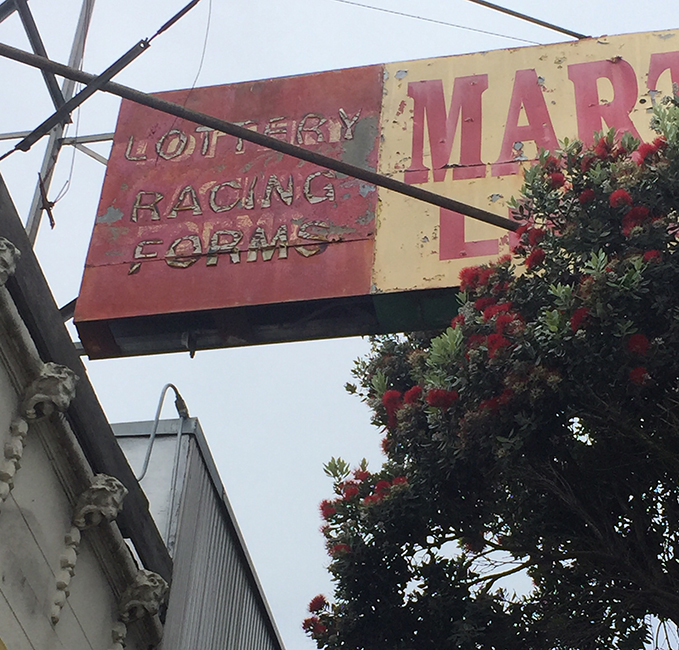 Indeed, you find what Johnston refers to as marginal typography in marginal spaces. Ghost signs follow ghost people: at the end of an alleyway half hidden from the street. In the cracks, where the pedestrian eye gladly skips over them. Or hiding in plain sight under grime and patina. 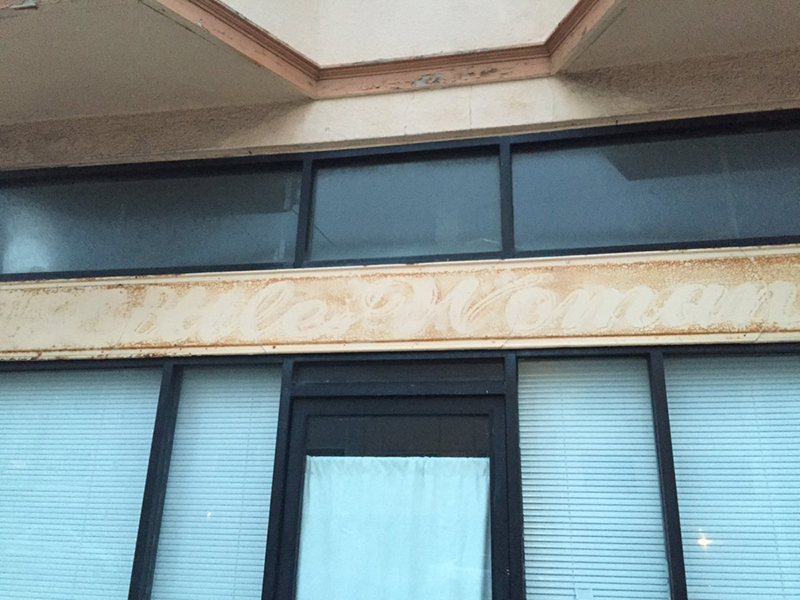 Vernacular is a useful term, Johnston points out, one that allows us to “categoriz[e] many forms of folk art, from the spontaneous to the elaborately-wrought, without assigning value judgments to the artefacts.”  One of the first things you notice about the photographs of old signage reproduced in Musings is the diversity of lettering styles and their unruliness, their disregard for spacing, borders, their refusal to conform or refrain from encroaching on their neighbors. 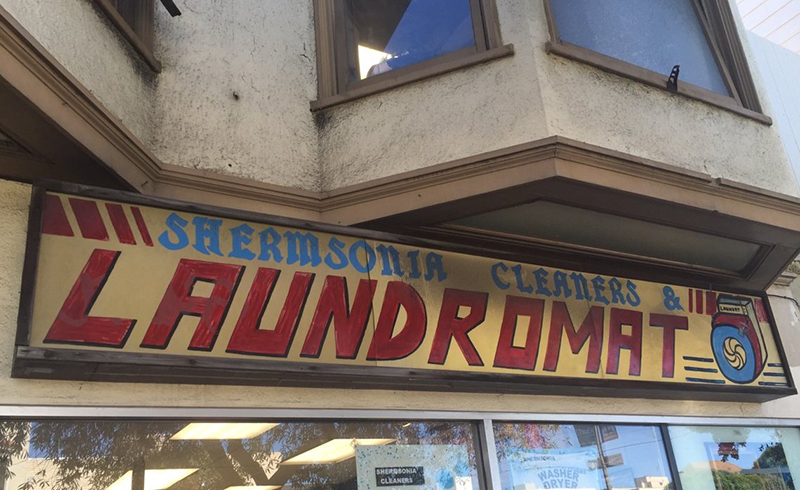 What I appreciate most about Musings now is not so much what it says about typography — I defer to Johnston on this — but rather how it explores the experience of city-dwelling from both the individual and social perspectives; how we navigate this perpetually changing landscape, with its ordered chaos of signs and symbols and ephemera, all of which somehow ultimately end up in our veins. 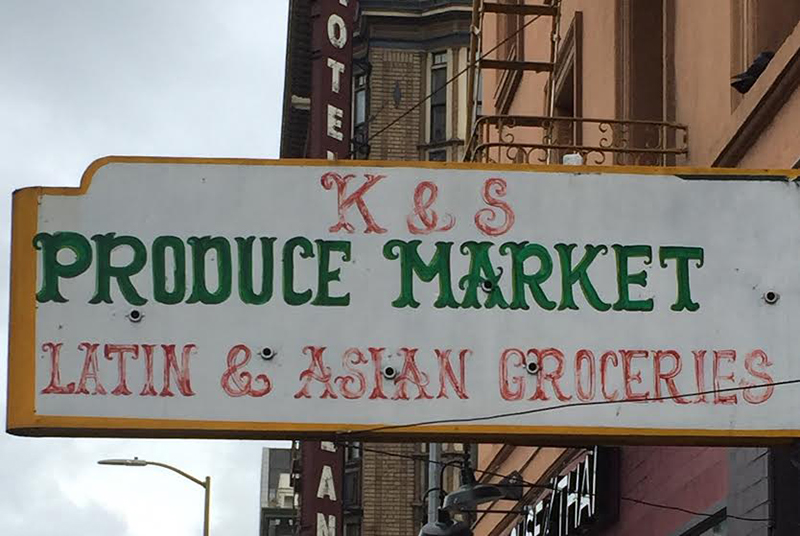 In my own brief survey I’ve tried to pay particular attention to the “menus, signage, embroidered lettering, and skywriting” which Johnston identifies as fertile grounds for the genius loci. 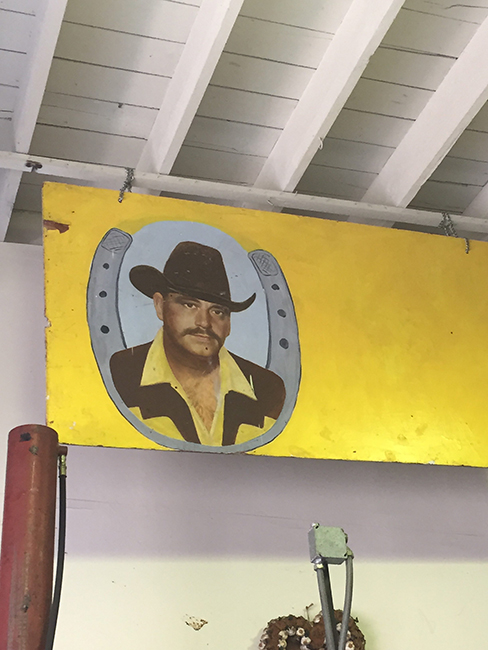 In lettering by hand we return to the ancient art of calligraphy, where writing and drawing flow into a common sea. 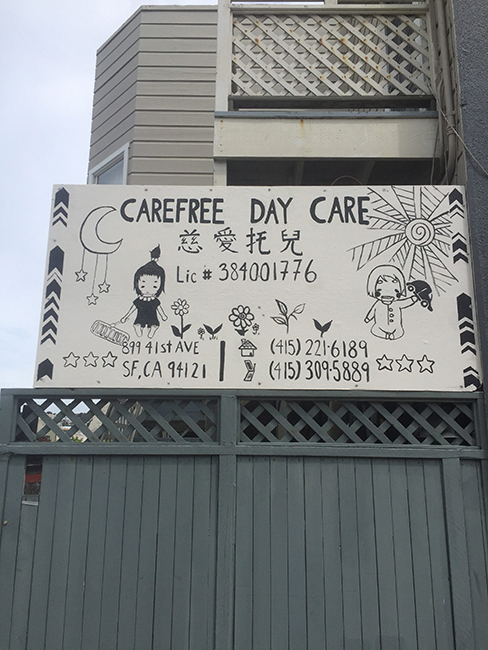 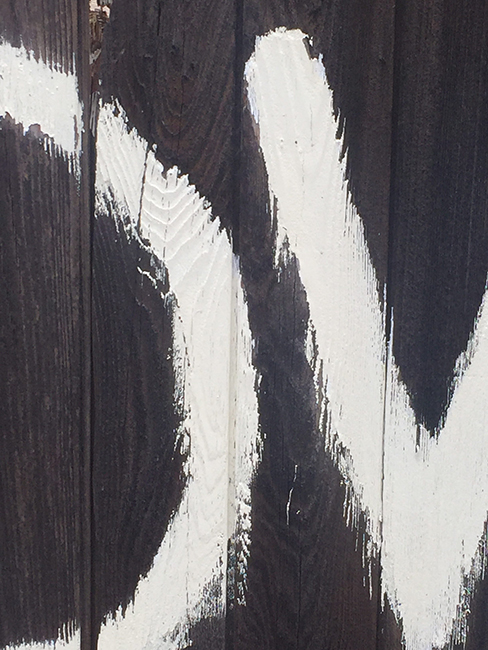 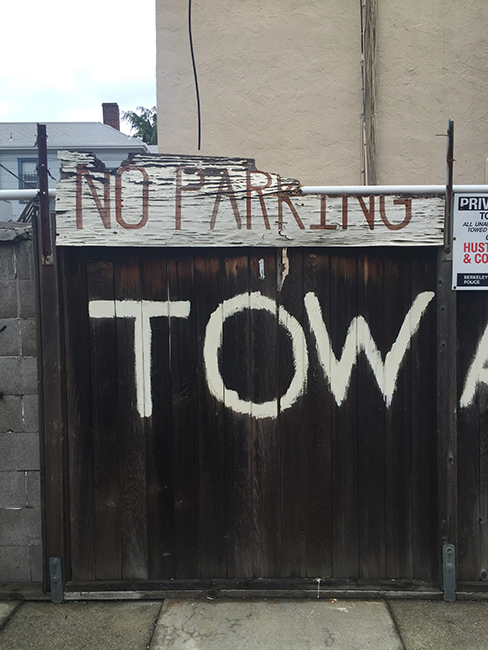 As Johnston points out, we must learn to notice how typography works in the wild, not just on the page, and in the present — not exclusively in a historical context reeking of formaldehyde. I don’t know that paying more attention to what we pay attention to will make the inevitable any less inevitable, but perhaps it can help us cultivate a finer awareness of our own gaze.

Perhaps, even, an affection for the useless. 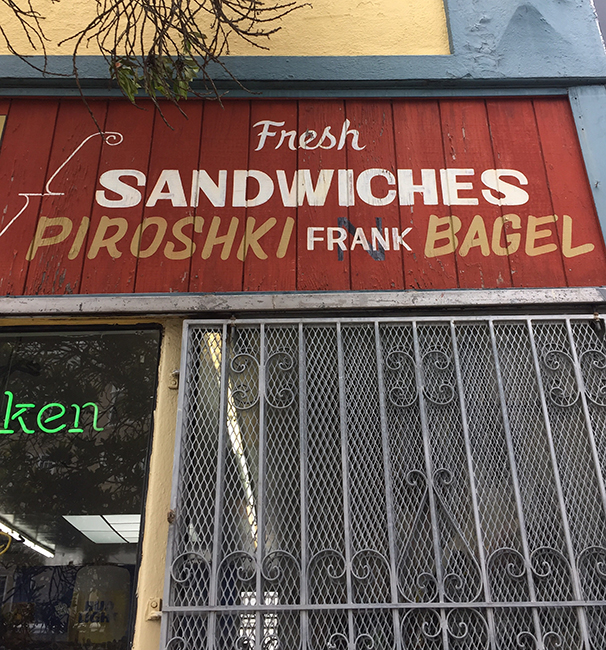