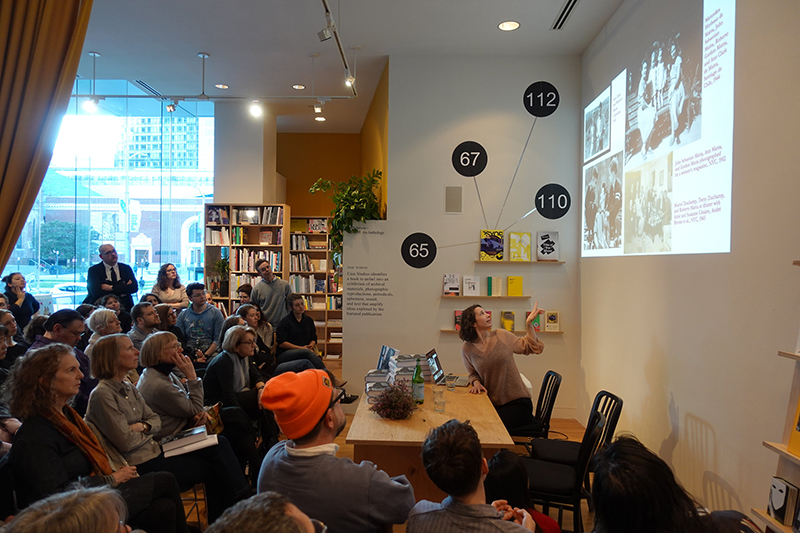 Your newest book, Gordon Matta-Clark: Physical Poetics, was just published by the University of California Press. Congratulations! How are you celebrating its arrival?

Two excerpts have been published, at Flash Art and Places Journal. We held a screening of Matta-Clark films at the California College of the Arts, and it was packed and people asked good questions. There was a wonderful launch event at the Curatorial Research Bureau (and because I’m writing these answers out of order, I’ve already described this evening below, in the future of this scrolling text, so read on). In May, there will be a New York launch at Pierogi Gallery, where Lytle Shaw and I will have a conversation about artists’ neighborhoods and coteries.

This is your first solo book about an artist, yes? Could you talk a little bit about the process of researching and writing it? Is it anything like the process of writing a poetry collection, or are they entirely different creatures?

The book evolved from a catalogue essay I wrote for an exhibition titled Odd Lots: Revisiting Gordon Matta-Clark’s Fake Estates, which I co-organized with Sina Najafi and Jeffrey Kastner for Cabinet Magazine in 2005. The research led to an Arts Writers Grant from Creative Capital/The Warhol Foundation, and then to a residency in the Matta-Clark Archive at the Canadian Centre for Architecture in Montreal. So it was a long, meandering process, including tangents into studies of Marcel Duchamp (Matta-Clark’s godfather, according to art legend); the Surrealist circle in New York after WWII (to which Matta-Clark’s parents Anne Clark Matta Alpert and Roberto Matta Echaurren belonged); the Judson Dance Theater community of the 1960s and early 1970s; the relation between artists in early Soho and writers around the Poetry Project at St. Mark’s Church; and the levels of leftist political awareness that did or didn’t (mostly did) exist in downtown coteries of the period.

Writing an extensively researched critical book has been different from writing poetry in that I felt a keen sense of responsibility to the people who lived these now-historicized details as real-time experience, as well as to art-historical issues and the critical literature on my subjects. I tried to think of it as a crypto novel, with characters and plot — neither of which concern me in poetry. At the same time, Matta-Clark as a personality in language is playful, alliterative, multifarious; he clearly experienced words (and lineation, punctuation, page space, etc.) as physical, sensuous, yet fundamentally unstable substances. That’s as close as I’m likely get to a definition of poetic thought.

Has anything (artist, artwork, event) in the Bay Area or elsewhere been particularly inspiring to you lately?

I was thrilled to have the SF launch for my book at the Curatorial Research Bureau, the bookshop and learning site directed by James Voorhies as a joint venture between the California College of the Arts and Yerba Buena Center for the Arts. Someone brought me a bouquet of heather picked that day above Muir Beach. My students were crammed in practically sitting in each other’s laps, and I met someone who owns a Matta-Clark photograph and we gossiped about this interesting man who’s been dead for forty years. I explained to the audience that I hadn’t understood the core organization of my own argument until a poet friend read an early draft and remarked that it was structured like a Matta-Clark Arrow drawing — and everyone laughed in this warm way to show that they knew what I meant about writerly process and trajectories spiraling out in simultaneous but opposite directions.

A few weeks earlier I had gone to New York to speak at a memorial service for the artist Dawn Clements. It was at Pierogi Gallery, now on the Lower East Side, and for many years before that in Williamsburg — Dawn’s longtime gallery, a hub for artists and writers that has been shaped and directed for two decades by Joe Amrhein and Susan Swenson; a home for us in the ever-more denatured landscapes of Brooklyn and Manhattan. Dawn’s monumental works on paper were on the walls — her explorations of feminine domestic space, in which each shoe and cup and little pot of Carmex is rendered as if it were the charged power-object in some secret society, and also a temporary concatenation of the matter that is leather or china or Carmex, or gouache or ballpoint pen or Sumi ink. People baked Dawn’s famous recipes for tarts and cookies and piled them on tables spread with her chintz tablecloths, and we watched clips from movies that she loved and from which she drew (like My Reputation, starring Barbara Stanwyck, 1946). Someone played the piano, and someone sang a cappella, and a standing-room-only crowd laughed and cried and talked for something like four hours about her graciousness and humor and intellect and art.

Back in the Bay, I went to another memorial service, for the poet Kathleen Fraser. It was at a children’s museum on a hill above the Castro District, on a spring evening with sun in the cypress trees. We watched a video of beautiful young Kathleen being introduced at a reading in 1974 by beautiful young Diane di Prima (a video from the American Poetry Archives at SF State, which Kathleen founded), and a group of ten people in which I was lucky enough to be included read, part by part, Kathleen’s great poem WING (1995). I had heard her read WING several times, most recently in 2017 at The Lab in the Mission in one of the best readings I have ever witnessed. It is a poem about nearly weightless fraying textures, and the fragments of classical knowledge as they drift down to us along vectors of history; about passage, dissolution, perception, and form. It is also palpably a record of the writer’s mind seeking its own transit on the page; the wing is writing in motion. The New comes forward in its edges in order to be itself.

Three scenes, I realize, of art-as-friendship. Each centered in culture-spaces that small groups of vivid, generous people work so hard, against the odds of exorbitant cities, to sustain. 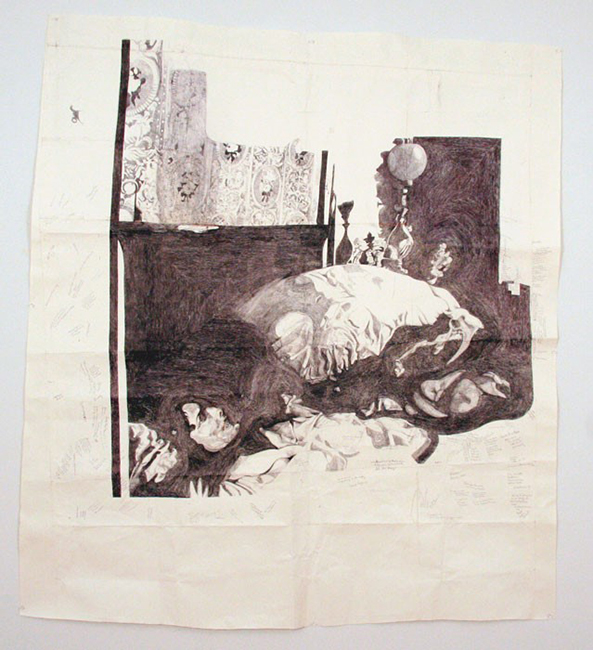 In addition to all of the writing and editing you do, you’re a professor at the California College of the Arts. Do these two (or maybe you’d say three) aspects of your creative and professional life feel quite separate, or like they’re all part of the same work?

They’re separate in terms of allocating time across a week or a semester, because each demands so much attention while I’m doing it. The energy output or cognitive-emotional entanglement in writing doesn’t precisely match that in editing, and neither is quite like that in teaching. In a day where I’ve done a lot of one in particular, it’s hard to do much of any other.

Inside that energy expenditure, however, for me they’re closely related practices. Each seeks to make sense, in expansive and rigorous ways, through language, of events and feelings, facts and phenomena that resist sense; that baffle and depress it, or exceed and dazzle it, or elide and elude it.

I’ve recently become associate editor at Places Journal, where essays are in the works about development and its discontents in Oakland, and the material culture of land reform in rural Italy, and the preservation of sites built by refugees in Palestine, and trans kids’ self-chosen bedroom décor. Watch that space.

A book I edited is coming out next fall: I Stand in My Place with My Own Day Here: Site-Specific Art at The New School is a kaleidoscopic survey of thirteen works that anchor The New School’s collection, by artists from Thomas Hart Benton and José Clemente Orozco to Kara Walker, Glenn Ligon, and Agnes Denes. The volume includes more than forty contributing writers, including Mabel O. Wilson, Claudia Rankine, Maggie Nelson, Lucy R. Lippard, and Holland Cotter.

And, just today, after the better part of a year annexed to completion of the Matta-Clark and New School books, I stole an hour from my to-do list and opened the file containing a poetry manuscript-in-progress. I read it straight through and recognized it — it didn’t feel like a misshapen alien offcut dropped out of some bad sky, the way an unfinished project sometimes does after a hiatus. So that’s good.