In 1968, the environmentalist Wendell Berry wrote an essay called “A Native Hill,” in which he describes his relationship to a hill he grew up near (and later returned to). Berry uses the relationship to articulate a type of environmental responsibility and emotional investment in place. Dwelling on the difference between a road and a path, he writes about how “[a]nytime one crosses a given stretch of country with some frequency, no matter how wanderingly one begins, the tendency is always toward habit. By the third or fourth trip, without realizing it, one is following a fixed path … Familiarity has begun.”

On my weekly visits to my own hill, an unnamed ridge behind Mountain View Cemetery in Oakland, Berry’s essay often comes to mind. I first discovered this place while wandering around one of the cemetery ponds. It’s not officially a park and there is no trail sign, but a gate and somewhat well-worn path invited me to proceed. Since then, my own familiarity has begun. 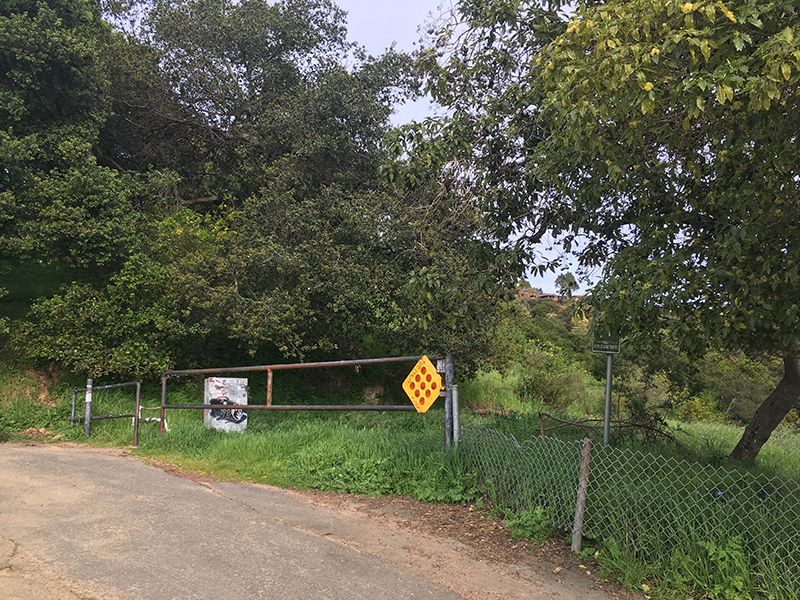 For reasons I couldn’t totally explain, I had the feeling from the beginning that this particular area seemed “happy.” It had something to do with how the sun hit the hill, as well as the profusion and diversity of plants. But as I came to know my hill more and more, using the app iNaturalist, I found that the hill’s inhabitants were almost entirely weedy, invasive species; to my knowledge, only the oak trees, poison oak, and a few other species are native. With Berry’s essay in mind, I began to refer to this place as “A Non-Native Hill.” 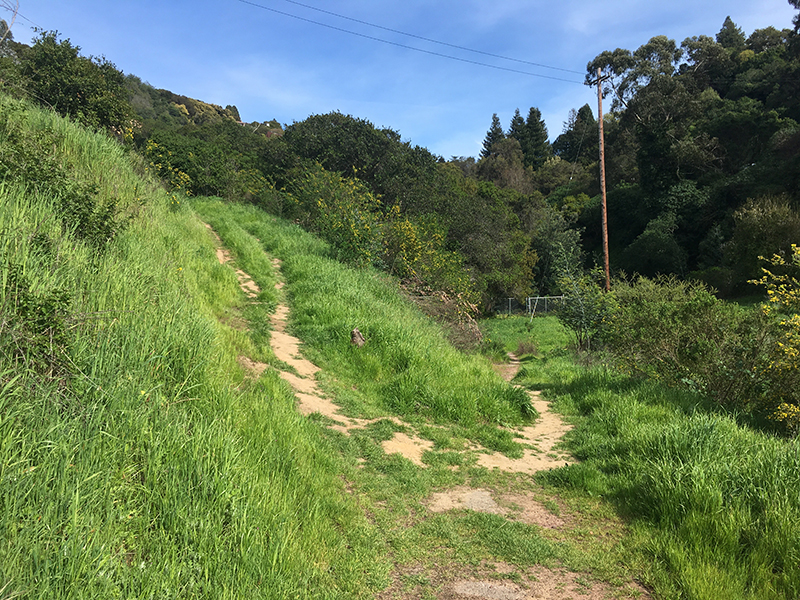 It’s spring, which means the non-native hill is bursting. Taking a left at the fork in the trail, I’m confronted with a whole lot of poison hemlock. Yes, this is the stuff that killed Socrates. 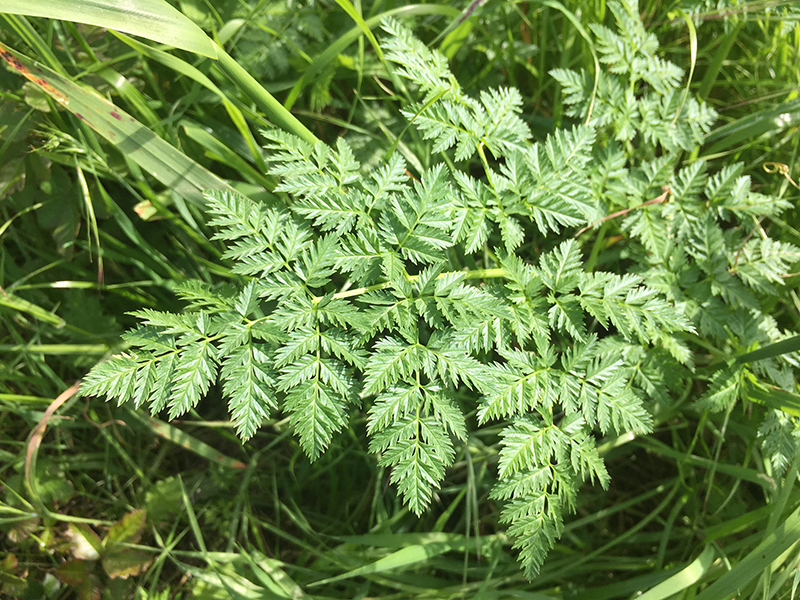 Poison hemlock is native to Europe and was introduced to the US as an ornamental plant in the nineteenth century. So was French broom, that most beautiful and ineradicable yellow-flowering pest. 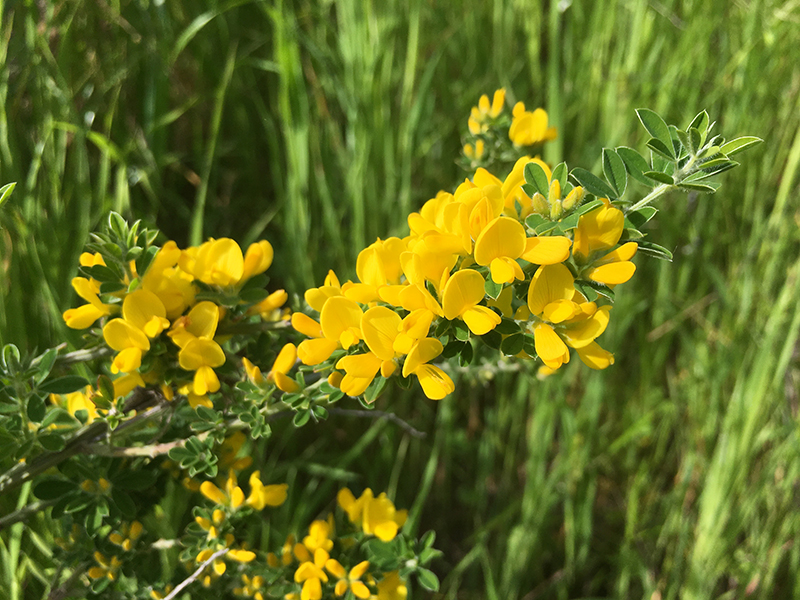 Efforts to remove it in the Bay Area have been ongoing and epic. In a Bay Nature article, “French Broom and and Earth Day Message of Resilience,” Autumn Sartrain describes a group of volunteers getting ready to pull the weed by hand on Mount Tam; the entire plant must be removed (including the root), otherwise it just grows back more aggressively. One volunteer says that “the effort is ‘analogous to reclaiming the Sahara with [her] watering can.’”

Below all of this creeps Himalayan blackberry, introduced in the nineteenth century as a fruit crop, because its fruit was larger and sweeter than that of other blackberry species. In a story that sounds like something out of John McPhee’s The Control of Nature, Himalayan blackberry quickly escaped its confines and became a widespread invasive plant, thanks largely to birds and other animals eating the fruit and spreading the seeds. 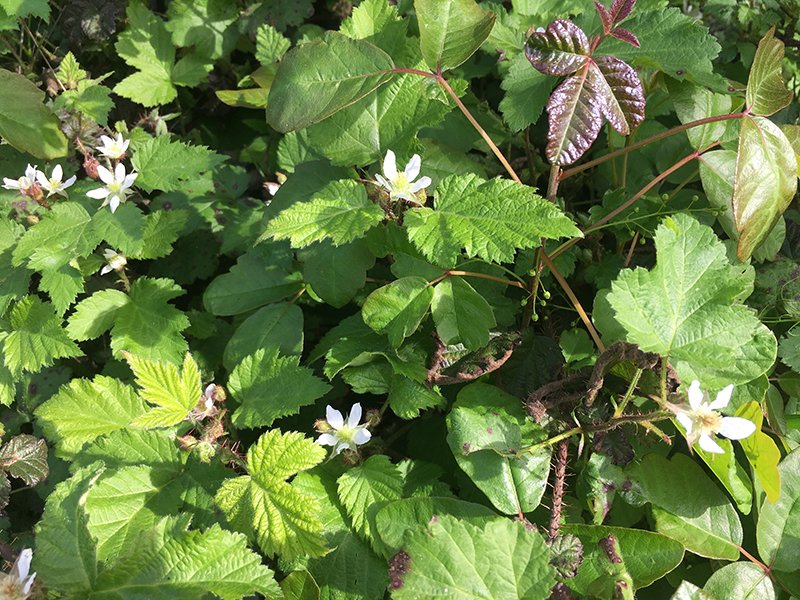 The path eventually turns left toward invaders from Australia and South America: silver dollar eucalyptus, Tasmanian blackwood, and the tall, waving pampas grass. Tasmanian blackwood is particularly easy to see this time of year because its little white fuzzballs give it a silver-tinged look from far away. 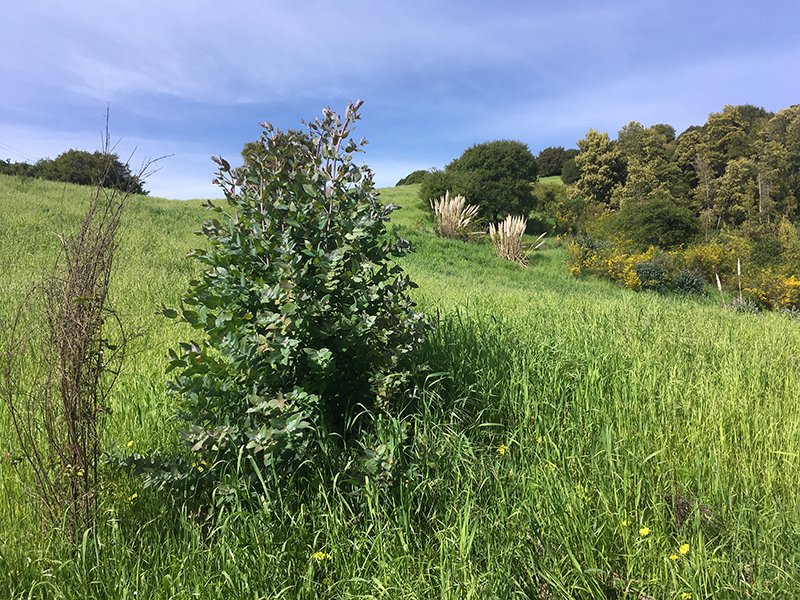 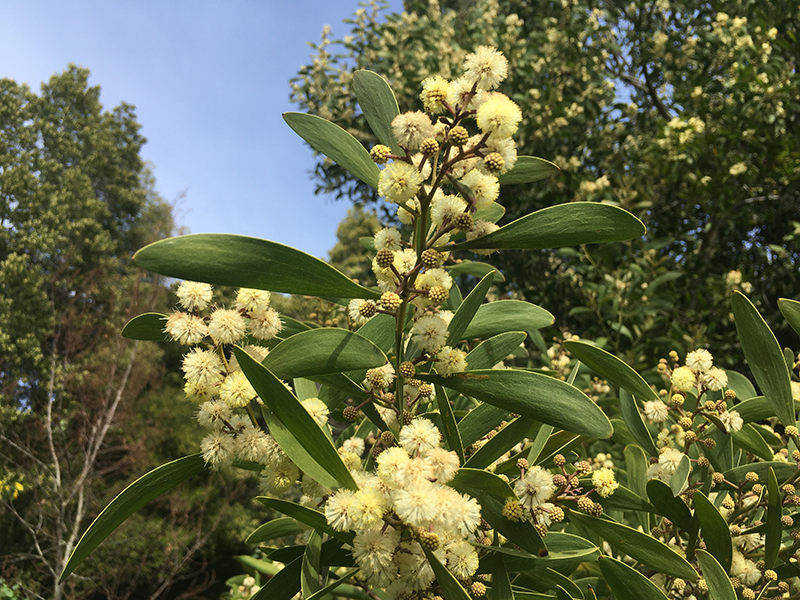 The path past this point passes into an open area that would appear on first glance to be “just grass” (i.e. wild oats or some other invasive grass). But hiding in here are some invasive flowers: Mediterranean stork’s bill (Mediterranean basin), dandelion (Eurasia), Bermuda buttercup (South Africa), and the impossibly tiny scarlet pimpernel (Europe and North Africa) — also called “poorman’s barometer” because some believe it droops in response to air pressure. 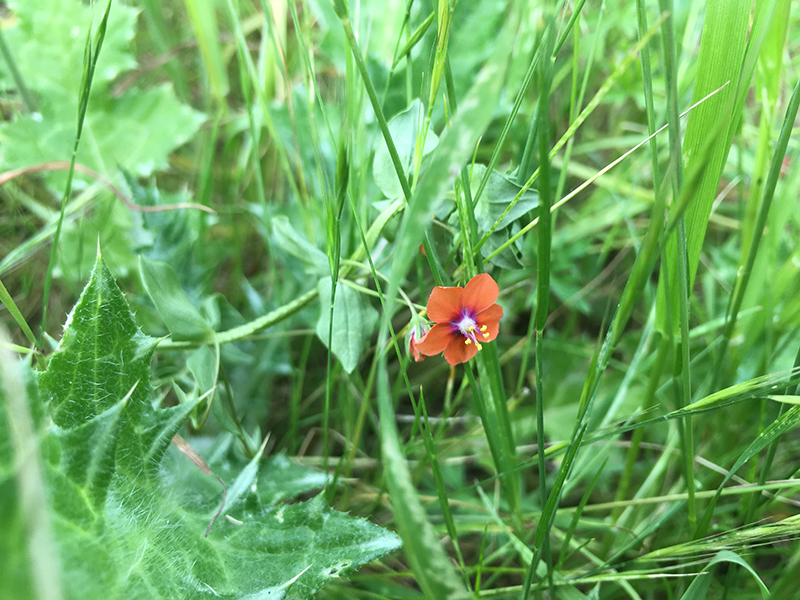 Aesthetic delight in invasive flowers is a complicated feeling. Just a few weeks ago, with a friend, I visited a mini “superbloom” of Bermuda buttercup in the Berkeley hills that had attracted a small crowd. In yet another Bay Nature article, “A Natural History of That Little Yellow Flower That’s Everywhere Right Now,” Jake Sigg, a retired Golden Gate Park gardener and “the Bay’s most outspoken opponent” of this flower, vents his anxiety about the plant’s rapid spread: “If we did nothing, in X many years Twin Peaks would just be one solid mass of yellow, and there wouldn’t be any other plants there.” 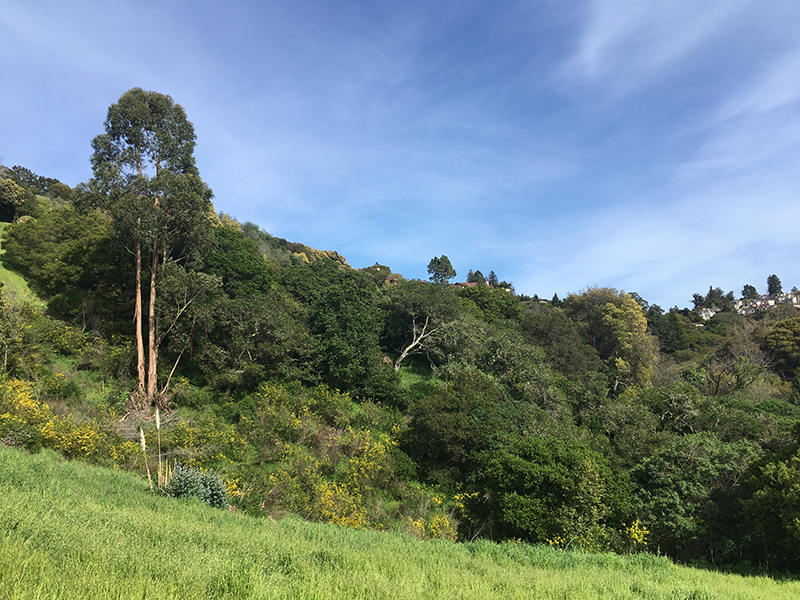 I should note that none of this makes me love my hill any less. It is still beautiful, after all; more than a barren stretch of cheatgrass like some other places, it is complex enough to hold the imagination. There is also something instructive in the process of resolving a seemingly “natural” scene to into a series of unnatural arrivals. Most of all, my feelings for the hill — which is ecologically unrecognizable compared to a past I will never know — have become a metaphor for loving the damaged present in which I live.

As plant communities battle it out on the hill, the shape of the hill itself is also changing. When I first started coming here, you used to be able to follow this path up to an even more mysterious area, containing the foundation of something I suspect was burned down in the 1991 fire. 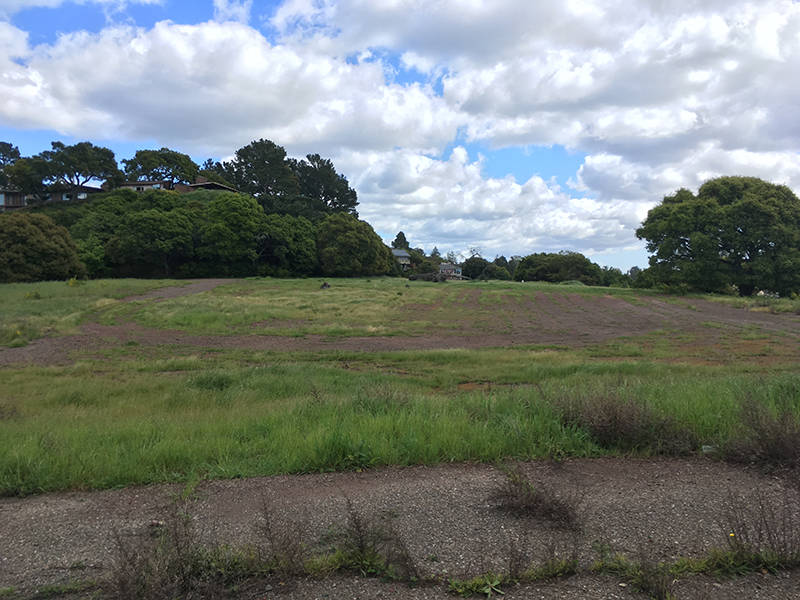 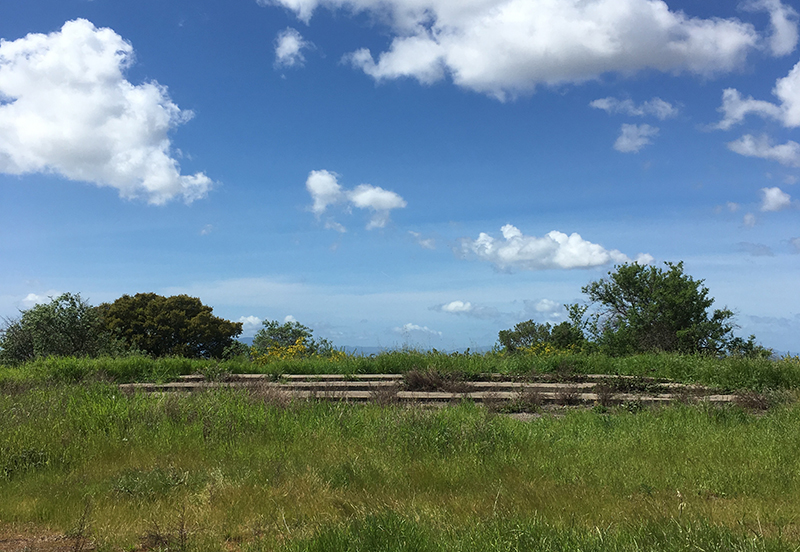 Since then, Mountain View Cemetery has made the decision to expand into this and one other part of the hill, adding capacity for 6,300 grave sites (which, according to the Environmental Impact Report, will “provide Mountain View Cemetery with approximately 15 years of operational capacity”). A few visits ago, I noticed part of my beloved hill was taller than usual and covered in a big plastic tarp. A rocky outcrop was removed. Then, a big, curvy stone wall began to appear. The last part of the trail is now blocked off by a green barrier and a no trespassing sign.

It’s a funny announcement to see in a space that already exists in a half-sanctioned state, a blank and unlabeled (literal) gray area on Google Maps whose one “trail” branches off into other barely-discernible trails made either by curious humans or resident non-humans. I’ve always liked the ambiguous quality of this place, with its unacknowledged ruins and its strange juxtapositions, like native wild cucumber entangled with a spray of french broom, or a tennis ball slowly decomposing in the grass. 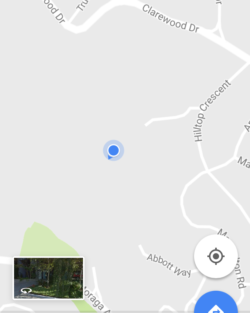 you are here (nowhere)

The last time I visited, I was listening to the frogs in an impromptu pond when I saw a man ahead of me of on the trail reach the no trespassing sign and pause. The little wall and its orange netting faltered in the wind. After a few moments he matter-of-factly stepped around it and continued, from one blank space on the map to another. When he was gone, I turned and descended the hill, eventually tromping off the trail and disappearing into a wayward, cosmopolitan congress of trees. 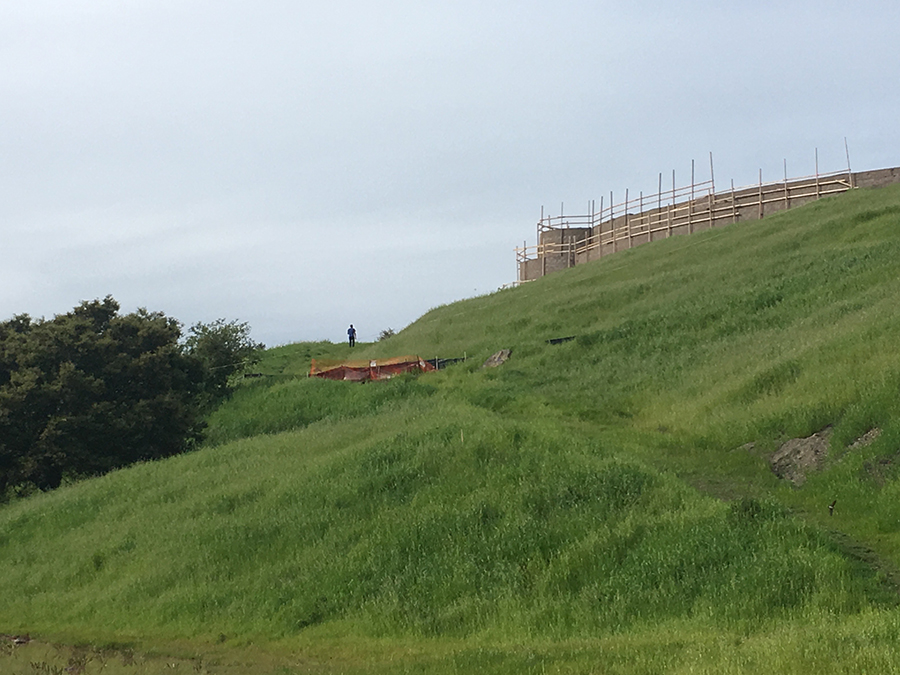