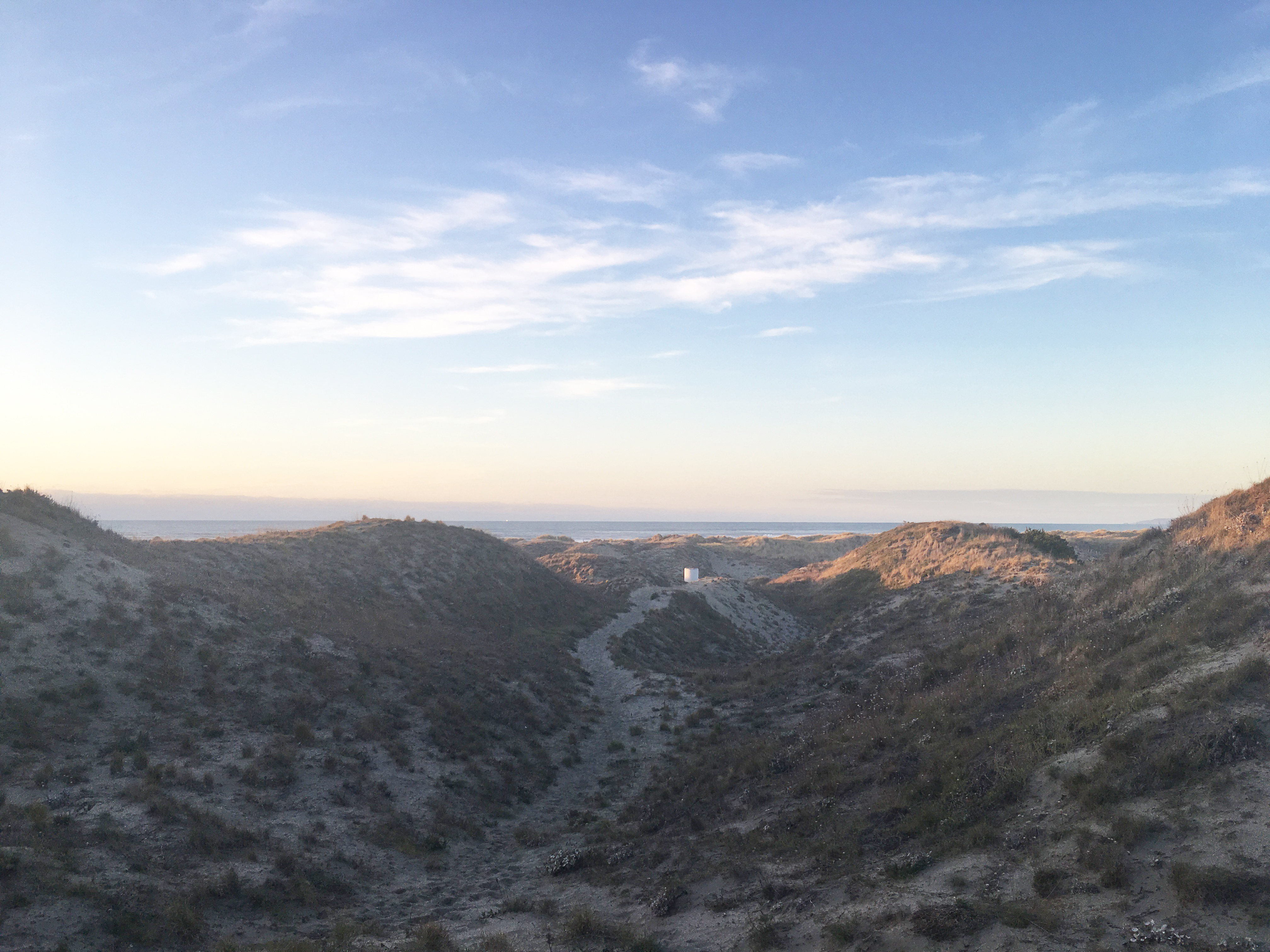 Recently, while planning a trip up north for an artist talk at Humboldt State University, something caught my eye on Google Maps: a town called Manila, which sits on a narrow spit of dunes between Arcata Bay and the Pacific Ocean. Perhaps I was especially prone to notice it because my mother grew up in Manila (in the Philippines). When I looked it up online, all I could find out was that it was indeed named after the original Manila — but no information as to why.

At the university, after my talk was finished, I went to the library’s special collections with my question. The librarian pulled out Little Grains of Sand, a local history written in 1989, which offered this: “The community of Manila did not exist until after the road from Arcata was begun in 1921. Manila was a sign on the Northwestern Pacific Railroad, probably named Manila to match the name Samoa for the town farther south.”

Answering the question of why Manila was Manila would apparently require an explanation of Samoa, its neighboring town. For this, the librarian brought out the November-December 1985 issue of The Humboldt Historian, whose section, “What’s in a Name?” quoted The Redwood Country by Lynwood Carranco:

SAMOA: In 1892 a group of Eureka businessmen formed the Samoa Land and Improvement Company, and purchased the James Brown property and adjacent property. […] The land was surveyed and lots were to sell from $75 to $300. The company advertised that this town would be the “Oakland of Humboldt Bay.”

At this time, two rival chiefs were fighting for supremacy in the Samoan Islands. The islands were owned by several European nations that planned to seize part of the territory when the Samoans had exterminated themselves. News of the Samoan Revolution occupied a prominent place on the front pages of the newspapers for some time, and the town builders chose the then popular name. Since then the original tract and the land south along the bay, including the Brown property, have been known as Samoa.

In other words, the naming of Samoa was what my boyfriend Joe Veix called “early SEO” (search engine optimization). Like a celebrity running for president, such an act banked solely on the public’s familiarity with the name — no matter the reason why.

As arbitrary as this origin story may sound, I did notice one small irony. Not long after Samoa (California) was named for a European colonialist saga in Samoa (the country), the dunes in Samoa, California began to play host to another European colonizer: beachgrass. According to a 2010 Humboldt State master’s thesis on dune restoration by Emily Walter, Ammophila arenaria (European beachgrass) was specifically “introduced to the North Spit of Humboldt Bay in 1901 to prevent sand encroachment at a timber mill.” Soon, beachgrass began to choke out the native beachgrass (Leymus mollis) and other species due to its “monotypic habit.” 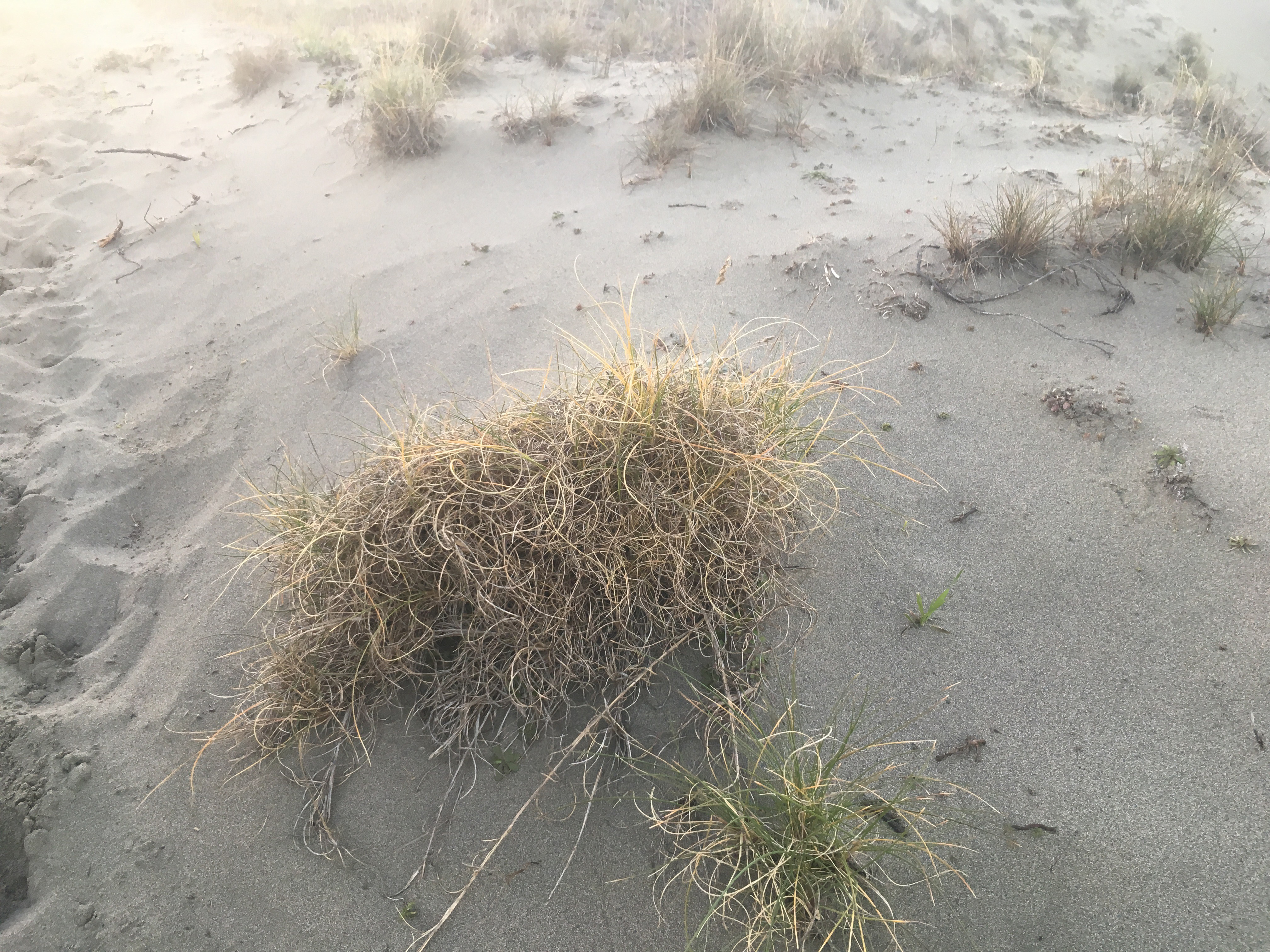 In the 1980s, the Nature Conservancy began removing beachgrass and other invasive species at the Lanphere Dunes Unit, just north of Manila, in order to restore the dunes’ native ecology. Other groups followed suit, and the process of restoration through removal of beachgrass continues to this day. At HSU special collections, I looked through the 1997 Dune Restoration Manual for the Manila Beach and Dunes: A Volunteer’s Guide to Hands-on Exotic Species Removal. Besides the choking-out of other species, the guide identified a second problem: the densely growing European beachgrass did not allow sand to move through as it normally would, creating “over-stabilized” dunes.

In fact, I’d seen a squabble over this very phenomenon in an unlikely place: the comments section an article about a body that had been found in the nearby Ma-le’l Dunes. Off-road vehicle enthusiasts took the opportunity to complain about how the shape of the dunes had changed due to beachgrass removal. “Xdunerider” wrote, “When we were allowed to ride in the area, it was the Manilla Dunes; they best ORV area on the northcoast [sic]. Used to be a big tourist draw, but all of that went away and as mentioned previously, the whole area is destabilized and will have dunes up to the slough.” Further down, “Dune Fan – ATVs suck” countered by echoing the grass removal guide: “The dunes are being frozen in place by non-native species. Removal of those species allows the dunes to move, as they are naturally supposed to do. A non-moving dune is NOT natural!” 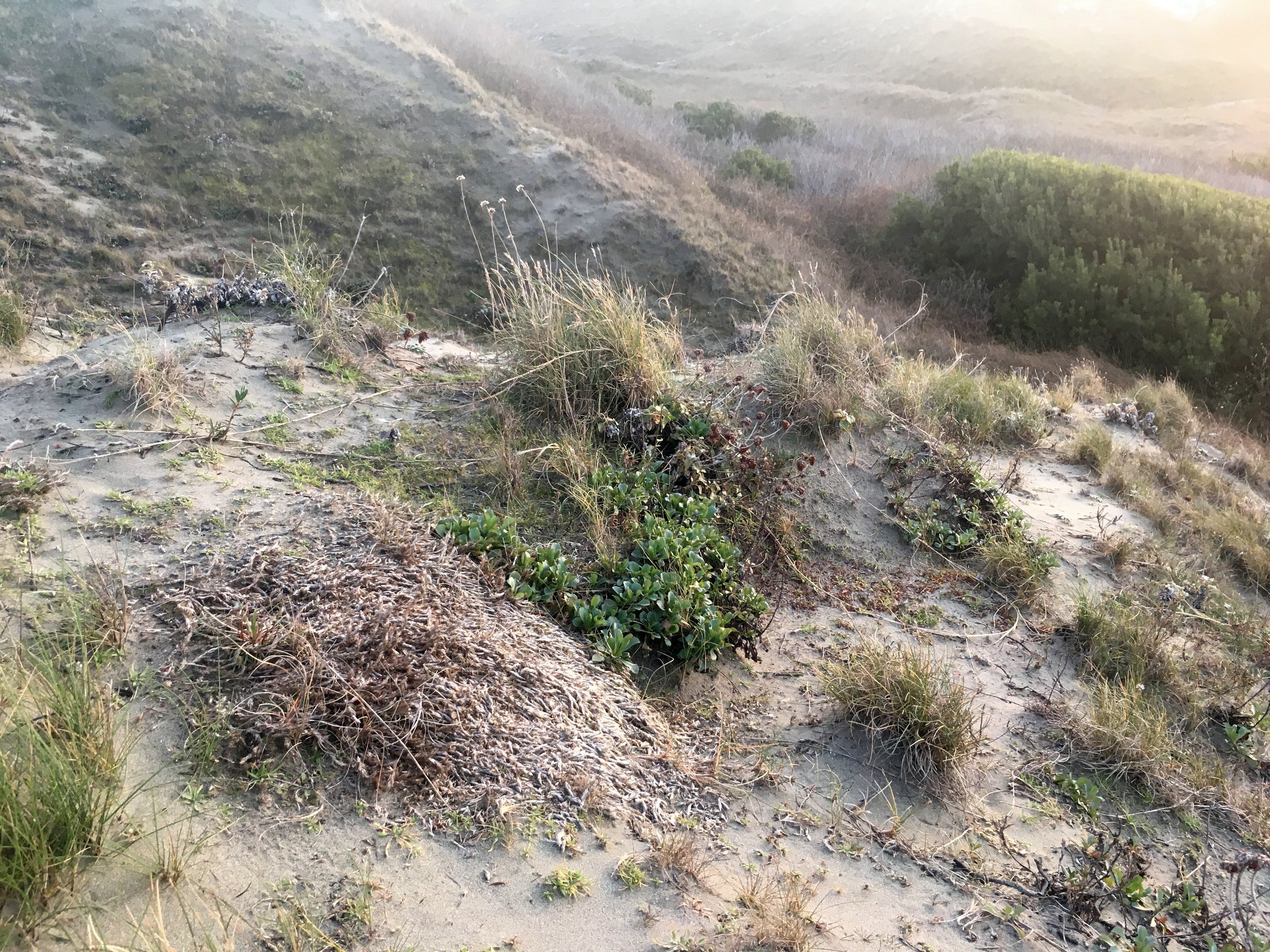 Leaving special collections and with just enough daylight, I drove out to the contested dunes. The undulating landscape was empty except for a couple in the distance walking their dog. Sand moved among the crispy winter incarnations of sea thrift, coast goldenrod, and seaside buckwheat; the dunes themselves were moving too, although imperceptibly to me. I thought about something I’d seen in the first chapter of Little Grains of Sand, on the original Wiyot population of this area. After detailing their retreat and extermination, the author ended the chapter with an odd twist: “When an old Indian was questioned about earthquakes in 1906 following the San Francisco earthquake felt strongly in Humboldt, he replied, ‘This peninsula rose in one night and it will also sink in one night.’” 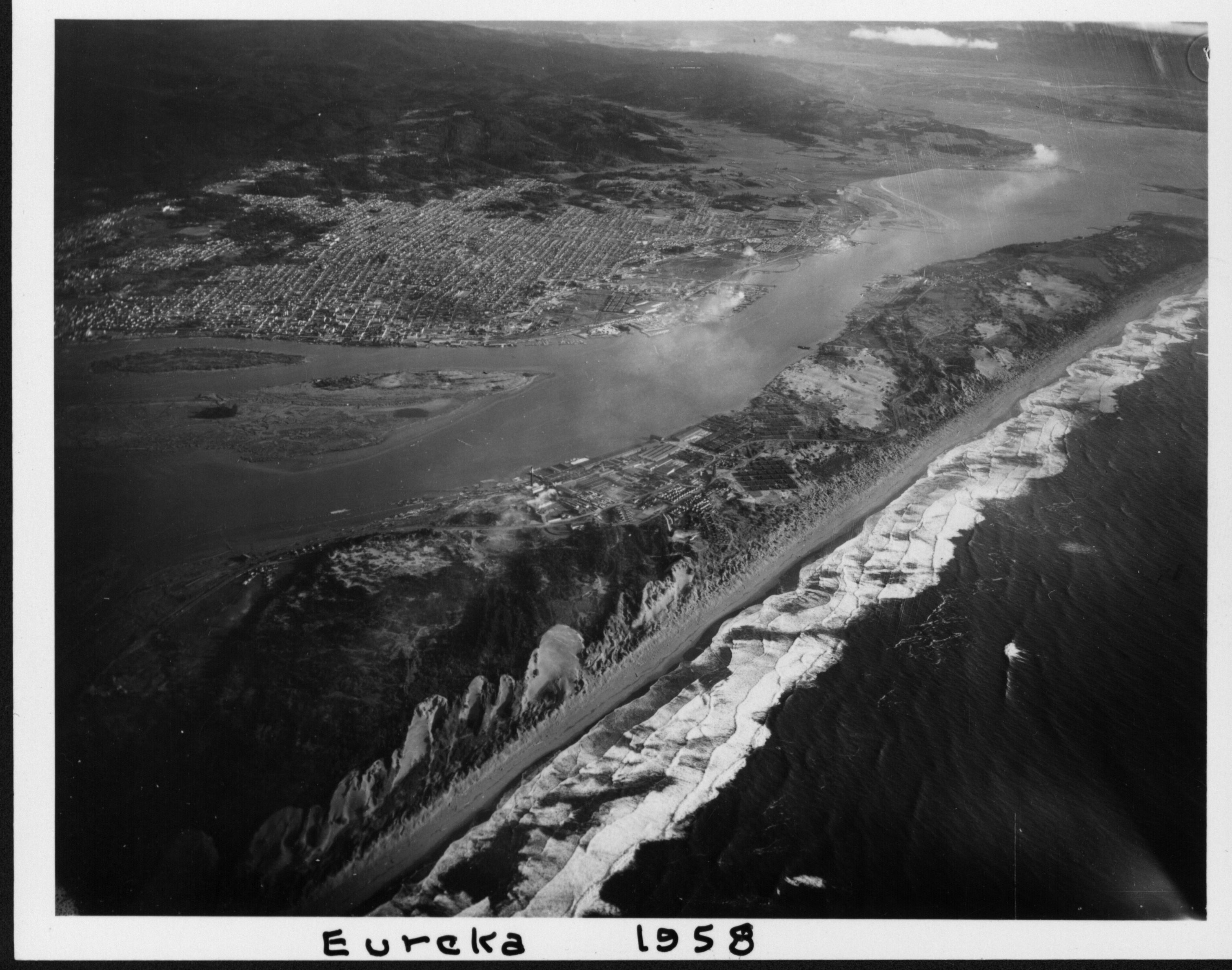 dunes “frozen in place” by a photograph: Manila dunes and the town of Samoa with Eureka in the background (Shuster Collection, Humboldt State University Library)

During the newsworthy crisis after which Samoa was named, there was at one point a standoff among US, German, and British ships in Apia, Samoa. Although the captains of the ships were aware of increasing signs of a hurricane, none wanted to appear cowed by the elements. In Blunders and Disasters at Sea, David Blackmore writes that “[t]he ships were dangerously close together, but they were there to project national power, and none of their captains wanted to ‘lose face’ by being the first to withdraw to safer open water.” On March 15, 1889, almost all of the ships were damaged or destroyed.

One hundred and thirty years later, I watched the sun set behind an impending rainstorm coming from the direction of Samoa (the country). History stockpiles names and attempted stabilizations, but it seems some things will always cross over, both in space and in time: water, wind, and sand. 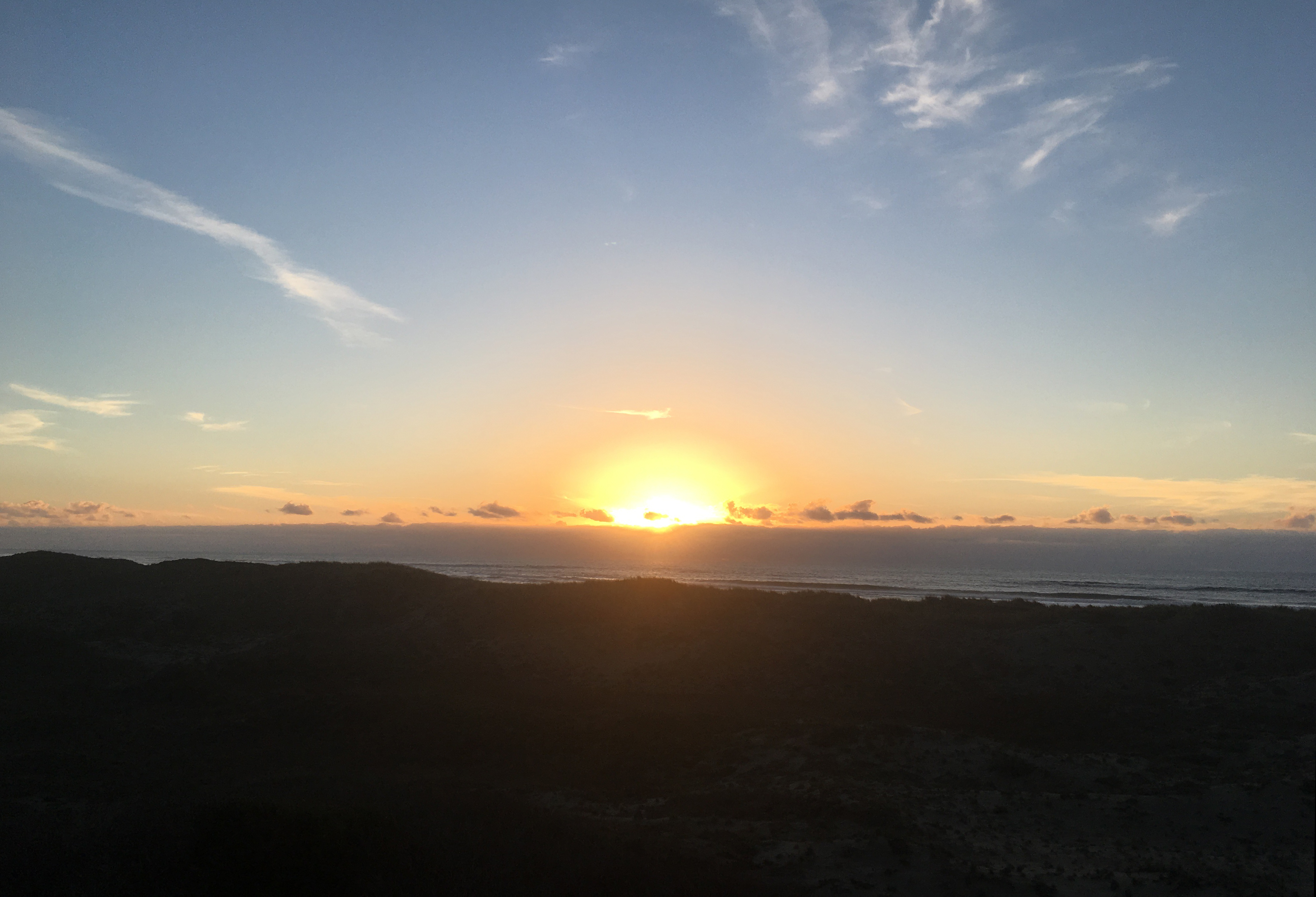