Once a year for the past four years, I’ve had the pleasure of teaching a class in internet art at Stanford. It has a special place in my heart because it seems to select for students with a good sense of humor and a high threshold for weirdness — but it has also proven an interesting measure of my shifting attitudes toward the internet. And in no part of the class is this more evident than the section on tactical media.

Tactical media refers to an artist using the media as the medium – for example, Ant Farm inviting the entire Bay Area news media to watch them crash a car into a pyramid of TVs in their 1975 piece Media Burn, or Eva and Franco Mattes’ creation of Darko Maver (cw: grotesque imagery), a fictional artist whose acceptance into the 1999 Venice Biennial with images of mutilated corpses was as dark as it was embarrassing. In these and other cases, the artists would manipulate the media or public opinion, often playing it against itself.

I knew I needed to update my lecture in 2016 when a student asked: “Does this mean Trump is a tactical media artist?”

This was right around the time that “fake news” was becoming a household phrase, and indeed, I started to wonder how tactical media appeared in a context of rampant falsehoods and a general culture of scamminess. Of course not all tactical media directly involves fiction, but some of it greatest hits certainly do.

A classic example comes from a 2004 performance by The Yes Men (Jacques Servin and Igor Vamos). On the twentieth anniversary of the Bhopal disaster in India, Servin went on BBC World pretending to be a spokesperson for Dow Chemical, which owned Union Carbide. The 1984 incident at the Union Carbide plant, in which thousands of people died and hundreds of thousands were injured, is still considered one of the worst industrial accidents in history. Speaking on behalf of Dow, Servin announced that the company accepted full responsibility and would compensate all of the victims of the disaster. This not only drew fresh attention to the disaster but forced Dow Chemical to publicly state that, no, they were actually not going to compensate the victims of the disaster.

More recent examples of fictionalizing tactical media include Nathan Fielder’s creation of a fitness fad involving moving boxes — complete with a spokesperson and book, and which easily gained the attention of local news media — or the artist Zardulu’s creation of the wildly successful “selfie rat” hoax, part of a body of work comparing viral content to ancient myth. 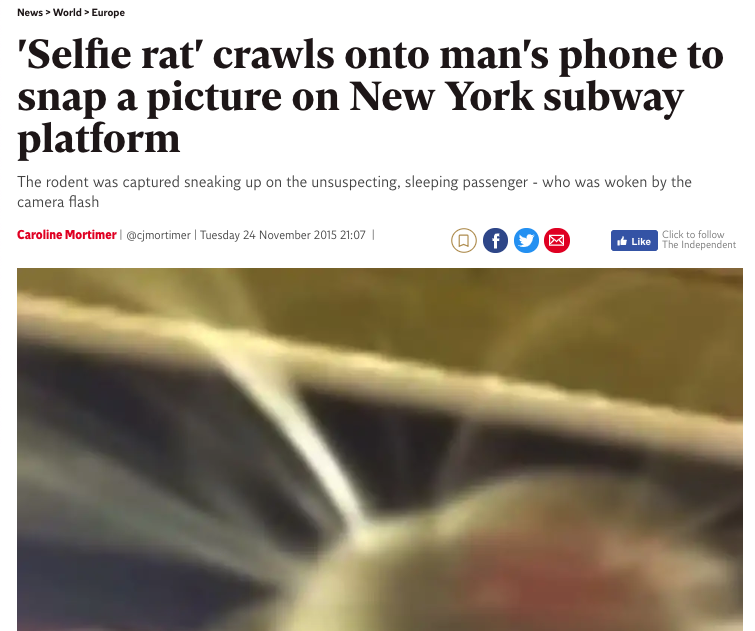 Fielder’s and Zardulu’s aims are similar to those of the tactical media artists who came before them, manipulating and exposing a media hungry for zany or feel-good stories. But in an era of viral marketing and clickbait, it’s not hard to find examples of the same techniques applied to very different ends.

Now, not only Trump but right-wing conspiracy theorists play the media in unconventional ways in order to get our attention. Brands have gotten in on it too; where once amateurs imitated corporations for art, corporations now imitate amateurs for profit. Three days ago, the Twitter account for Sunny Delight tweeted, “I can’t do this anymore” — this post currently has 314,000 likes and 136,000 retweets. (Brands — they’re depressed and hopeless just like us!) 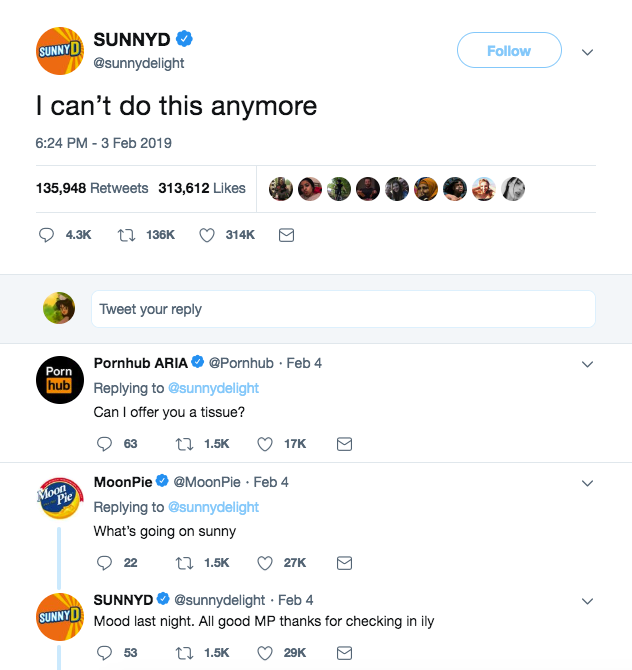 On top of all this, the shape and character of “fakeness” has changed. When AI-generated deepfake videos have become chillingly realistic, algorithmic filtering creates a hall of mirrors, and one of the most widely resonating articles is about just how much of the internet is fake — whither tactical media? On their page about the Darko Maver saga, Eva and Franco Mattes quote Oscar Wilde: “Man is least himself when he talks in his own person. Give him a mask, and he will tell you the truth.” But if every day we’re faced with someone in a mask telling not the truth but bullshit and lies, what does that mean for the artist who wants to work behind a mask?

This year in internet art, I tried out a new assignment. I asked my students to come up with a bogus company, design a website for it, and pitch it to the rest of the class. Their “companies” ended up being things like Adtube (only shows you ads), Facelook (doesn’t ask “what’s on your mind?” because it already knows), and Instasham (a community that only allows Photoshopped photos, in the name of “postmodern transparency”). Mostly, I had wanted them to experience how easy it is to throw up a facade in the Western boomtown that is the internet, which they did. But beyond that, my students’ projects reminded me of the continued utility of tactical media. They weren’t just jokes; they were tools for thinking things through, the same way that fictional products in Black Mirror spark conversations about very real issues. 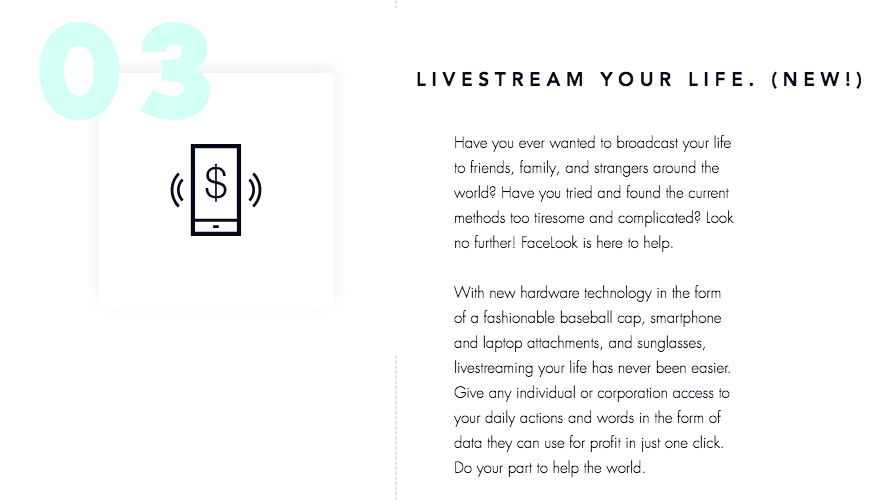 Even in an age of fakery, I think we can recognize that, sometimes, we still need fiction to approach a greater truth. We also need it simply to imagine something else. Just last month, The Yes Men handed out fake editions of The Washington Post, which imagined that Trump was no longer president — somewhat predictably, comparisons to fake news were swift and uncritical. In “The Fake Washington Post Wasn’t Fake News,” April Glaser has to remind us that the fake edition “wasn’t even trying to sell its fake story as true — it was positing it as a possible future, not a current reality.” Reading this, I think of my friends’ own projects, like the Guantanamo Bay Museum of Art and History and the Museum of Capitalism, both of which imagine their subjects as closed and ready to be memorialized, and both of which could be called “fake” by someone too impatient for the nuance of the projects. 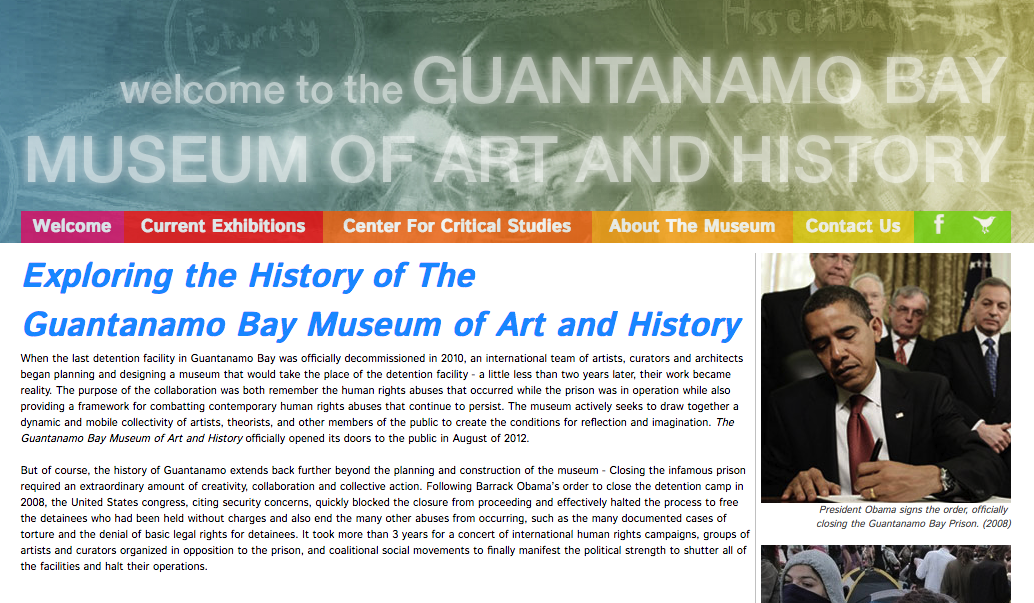 Tactical media is so often seen as prankish, sitting on a spectrum with hacking, trolling, and deliberate misinformation. But to reduce it to this would be to overlook what tactical media has to offer, which is the ability to expose hypocrisy and inattention and to reflect on dystopian elements of the present. Perhaps most urgently, it lets us fashion a convincing missive from a very different future — and right now, I’ll take all the missives I can get.