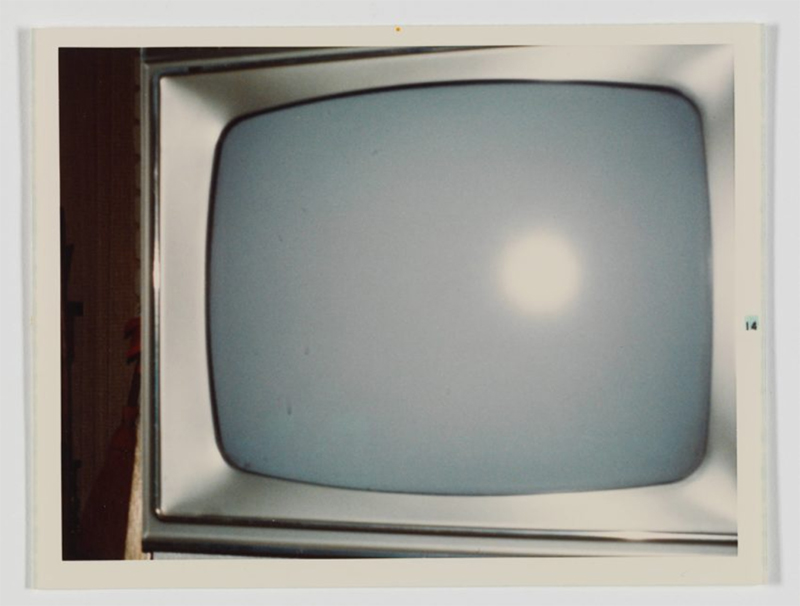 I struggle with the body of today’s (television) screens. They take over any room, no matter how small or discreetly placed. Off, they suck light. On, they suck everything.

There are a number of snapshots (all Unknown, Untitled, from Peter Cohen, a collector of found photographs) grouped together in SFMOMA’s holdings, presumably because they all contain, in some way, a television. Most date from the 1960s and ’70s, the era of my childhood. I am drawn to them, especially the ones with the television off.

By my mother’s edict, we weren’t allowed much TV once we started kindergarten. For about ten years, almost no weekday television. Cartoons and PBS were permitted on the weekends, (parents sleeping in) watched on the big TV in the nook off the bedrooms, and the great line-up of seasonal specials: starting on Halloween with It’s the Great Pumpkin, Charlie Brown, on to The Wizard of Oz, Chitty Chitty Bang Bang, Willy Wonka, Rudolph, Frosty, and A Charlie Brown Christmas. Did my mother get this idea from “Television,” one of the Oompa Loompa songs in Charlie and the Chocolate Factory? It is a scathing, vicious, unrelenting indictment of the tube. And did my mother fully appreciate her act of subversion, as my father worked (all waking hours) at the Midwest branch of a New York ad firm? That kind of spelled something out for me, early on. Mother (as) Situationist.

No answering the phone during dinner, either. And no sugar cereal. And no pop.

The Newshour was a weeknight exception. A tiny black-and-white set next to the toaster was promptly turned on in the small galley kitchen. This was my mother’s time alone (we worked around the periphery), heralding evening, like a trumpet corps, and dinner, and homework.

I was then more used to the TV tube unilluminated, the greyish lavender milky glass a portal, reflective and deep both — suspended, like Water Lilies or Monk by the Sea or a Chinese landscape painting: clouds, mist, emptiness, surface. Earthly formed things pushed to the edges. One had the feeling there was something actually, physically, going on in there. Some kind of television gnosis. In this picture (Unknown, Untitled), I notice a pinkish glow around what must be the reflection of a flashbulb. Looking more closely, around the left edge, I see it is a color snapshot.

And there was a relationship to those sets as furniture. The holder was as important as the held — the console, the stand, the cabinet, the frame, the way it met the tube, the bevel. It was in the room, and a certain kind of TV could ennoble a room. A proud messenger. It wasn’t just not on, it was its own thing. (The kind it was — the choice — told us something about the chooser, like their car or their eyeglasses.)

In 1984 I went away to college with that small — by then old, mostly off — black-and-white TV. My roommate showed up with something similar, only a little bigger. We were in a great city, with lots of tall buildings, and little reception. It turned out the sound (kind of) worked on hers and the picture (sort of) worked on mine. We placed them one teetering atop the other balanced on the radiator cover in front of a window, both antenna hopeful and fully extended toward somewhere, like some kind of scholar’s rock. Mostly they sat unused. But I do remember an occasional celebratory Sunday evening ordering takeout and watching an episode of something or another.

I didn’t think to take a picture.