Step 1: To apply for asylum in the US, you must be physically present in the US or seeking entry into the US at a port of entry.

Before our grandmothers knew our mothers’ names they made the choice to orient our families, and our future, toward the North. Generations later we find ourselves at this threshold that they made home, at the border between the Californias. Margarita, Trinidad, Lidia, Josefina, Martha, and Marcelina cultivated earth and humans’ lives, leaving a legacy of critical transnationality, binationality, and care. They are the infrastructure that sutured our childhoods to the specificity of the crossing between Tijuana, BC–San Diego, CA, and Mexicali, BC–Calexico, CA.

When we think of fugitivity, we think of our grandmothers as young women fleeing poverty, fleeing violence. We think of them moving toward opportunity for themselves, toward the education and relative safety that we, their grandchildren, have been able to grow up in.

If they had not been allowed to arrive, we would not be.

Borders are sites of vulnerability, points of connection with Otherness, spaces where intimacy and trust are negotiated.

“Vulnerability” comes to us from the Latin vulnerare, meaning “to wound.” Too readily, processes for negotiating vulnerability, spatialized in/by/as borders, are undertaken according to patriarchal codes that are incapable of conceiving non-violent, non-hierarchical forms of engagement.

Such codes foreclose possibility, limiting our political and social imaginations. Bound by these codes, we either wound or are wounded: chingas o te chingan. In perceiving the Other as incapable of responding humanely to shared vulnerability, the aggressor preempts (presumed/hypothetical) violence with (literal) violence; negating their own humanity as much as the Other’s in the process.

As a consequence, our territories and our bodies bear the marks of lines drawn to wound. But it is precisely at the edges — at borders and border-ized spaces — where we must unlearn this pernicious habit; to overcome the notion that by not wounding, we open ourselves to be wounded. Instead, we must learn to reaffirm our shared humanity. As Enrique Dussel reminds us in Ethics and Community, “It is not love of oneself; it is love for the other as other […] for the sake of that other and not for my own sake, with a respectful attitude toward the person of the other as something sacred and holy.”

So we’re writing you because we’re grief-stricken and we’re writing because a love letter is the best thing we can think to send out into the world; because beyond our grief, we also feel awe. To move, to flee, and to seek to make a new life in another context is first and foremost an act of deep bravery and resistance. We are awestricken at the solidarity, love, and hope cultivated at the seam between two nations in spite of the militarization and violence that continues to be enacted there.

At the same time, we’re saddened by the way some of our Mexican compatriots have chosen to respond to your arrival. Their hate and intolerance is a symptom of unexamined and violent colonization in Mexico. We want you to know that we see this, and that we understand there is much to be done within our national and diasporic conversation to address the overt and latent historical pain we hold, so that we do not inflict our pain on others. Sadly, fellow citizens have sold themselves rather cheaply to become agents of this manufactured, artificial crisis — choosing to argue about the allocation of scarce resources rather than questioning the underlying causes of our collective precarity.

We recall Ruth Wilson Gilmore’s definition of racism in Golden Gulag: Prisons, Surplus, Crisis, and Opposition in Globalizing California as “the state-sanctioned or extralegal production and exploitation of group-differentiated vulnerability to premature death.” Since the early ‘90s, racist policies have sought to diminish the ability of migrants to cross into the USA from Mexico, building up fencing and walls to funnel the most desperate and vulnerable among us towards increasingly dangerous routes through the Sonoran desert — effectively weaponizing the landscape. Today, we are experiencing a new iteration of this strategy: the purposeful misdirecting of resources to create bottlenecks in the asylum-seeking process at designated ports of entry, placing at risk your health and our collective ability to survive as transnational beings.

What this amounts to is the attempted transformation of the city into a tool at the service of state-sponsored racism, targeting our existence as migrant beings — un atentado en contra no solo de nuestro presente, sino en contra de nuestra historia, y de nuestro futuro.

In order to resist, in trying to make space for us to be safe together, we think about fugitivity — yours and ours — and what the work ahead of us looks like. We find ourselves searching for you; we have to set intention and trust upon you to know that you are there, to feel you with us, so you don’t remain a specter. We remind ourselves that you are there, because we are you and you are us. The Border, and the borders between us, are constructions that time will erode.

The Latin dedicare, to dedicate, is to consecrate: to make divine, to make legible within the institutional and cultural specificity of spiritual practices. Lately, the dedication we feel most strongly is to our collaborators, to our interlocutors who make our work nimble and mobile. Our words, disagreements, and compromises become alive in others, more vivid and more ready to exist in the world, in the service of transforming it.

This is a dedication. Tú eres mi otro yo. Estamos contigo. 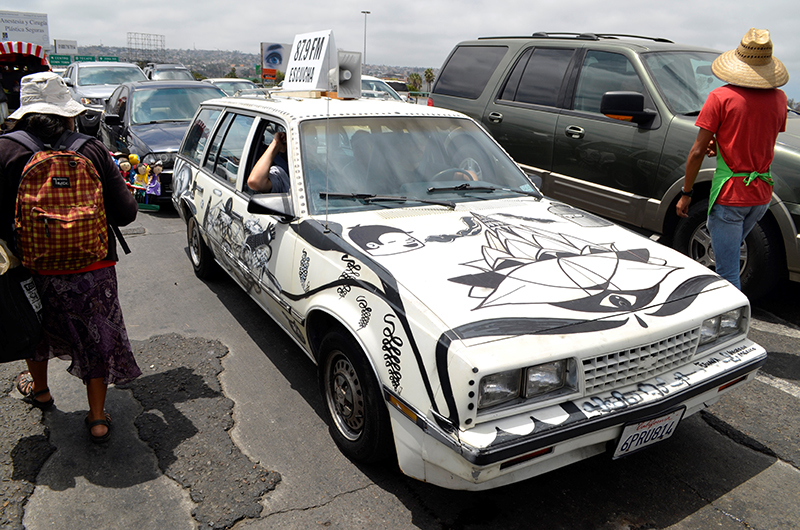 This mixtape was transmitted over hyper-local pirate radio throughout the city of Tijuana on December 19, 2018. Cog•nate Collective traversed spaces where acts of physical and symbolic violence have been committed against asylum seekers and migrants, spreading a trail of salt water from the Pacific Ocean in a ritual act of sonic cleansing.

Many thanks to writer and border ethnographer Kendy Rivera Cárdenas for serving as a witness and accomplice to the performance.

Tags: Cog•nate Collective, We the People