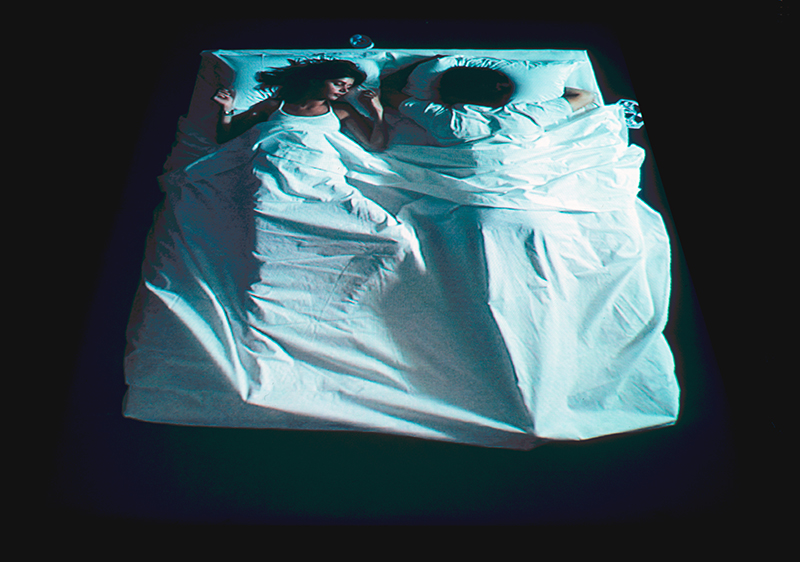 I used to study books on lucid dreaming. Repeat I am aware that I am dreaming before dozing off; breathe; inspect your limbs for distortion as a tell you’re slumbering. Mastering the delicate balance between intellect and emotion, an elusive tug of war, was a rigorous feat of cognition. To my parents, I was just taking a lot of naps.

Voyeur of my own subconscious, curator of my own narrative, yet still surprised at plot twists. Aliens and devils were cast in repeated sequels: carnivalesque conspiracies and sensual provocations. Eventually the novelty wore off.

In Sleepers, a video installation by the late Iranian filmmaker and artist Abbas Kiarostami, the viewer-voyeur watches two restless lovers perturbed by metropolitan discord, heat, and each other. Movements are activated by the slightest stimuli — a car horn, a brush of a partner’s fingers — in a silent colloquy that the sleepers may not ever know they’re having. We, the viewers, watch the interplay between consciousness and the unconscious from a literal higher ground. Projected on the museum floor, private and public lives merge.

With over forty films to his name — many of them meditative or otherwise slowly paced — Kiarostami once said, “I really think that I don’t mind people sleeping during my films, because I know that some very good films might prepare you for sleeping or falling asleep or snoozing.”

Kiarostami’s loudest critics denounce him for being escapist, for reducing Iran’s social strife to an artistic motif and catering to foreign audiences. During the 1979 Iranian Revolution, many Iranian artists (having been censored or prosecuted) brandished an arsenal of chisels and brushes, targeted the new non-secular governance, and fled the country to continue weaponizing their artistry from afar. Kiarostami stayed in Iran, producing global favorites like The White Balloon, one of his many films that features a child lead in sync with the humdrum rhythms of everyday life. Toward the end of his life, he also produced experimental works like 24 Frames, a collection of four-and-a-half minute films inspired by still images.

In an interview with The Guardian, Kiarostami asserted that the “beauty of art lies in the reaction it causes,” and that art cannot exist outside the audience’s perception of it. A sentimental tale of a boy and his lost balloon won’t call for insurrection; there may be nothing political about two lovers sleeping. (Oh no, not another thesis on whether or not art is inherently political.)

Still, who is the viewer? How do I interpret this mundane Rorschach test projected on the floor differently than do the people standing around me?

Viewing Sleepers from above, I enter a waking dream. Synapses fire in my prefrontal cortex, attempting to intellectualize the projection of dormant partners beneath me, abrading a limbic torpor that pulls me to rest. Above all I feel voyeuristic. As if I am the screenwriter of a lucid dream featuring these two characters, uncertain of their fate. I prescribe meaning to the light touches, bodily stretches, and limb flops. Are those pivots sexual? Material realities are now invented for these characters — their gym routines, their hopes and desires; earlier they ate something spoiled. Maybe they’re activists sleeping after a long day of protest. Yes, this must be a political work.