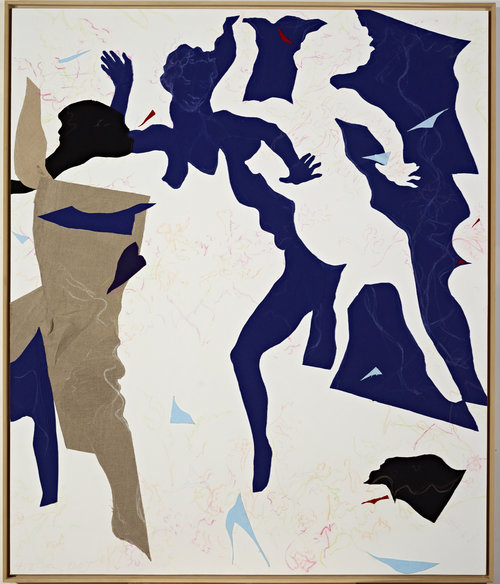 Some artists use their work to tell a story, some artists make work to show their process, but my favorite kind are the ones that make work to reveal things about the world. This is the sort of artist Oliver Lee Jackson is.

This California painter,  it seems, is not thwarted by by blank canvases or empty pages, and has begun his dialogue of revelation anew, this time in New York City.

For his exhibition, Chelsea’s Burning in Water gallery has done two remarkable things — the first was to bring the eighty-three year old artist to New York for the first time in twenty-five years, and the second was to present two exhibitions in a row without explaining it, framing it, or trying to tell us what to think about it all. Basically they’ve provided Jackson a venue with which to tell his own story.

His summer show was stuffed into their smaller Tenth Avenue space with paintings, wall hangings and prints which were mostly smaller works that benefited from a close read. Since then, the gallery has expanded into a 27th street location that really showcases Jackson’s larger paintings, figurative sculptures, and tapestries. It’s a lot of work just to look at everything and take it all in.

In fact, despite his living and teaching in Northern California for so long, one would be hard-pressed to tie Jackson to any of the movements that have defined the region aesthetically — Funk art, Bay Area Conceptualism, and definitely not the more recent Mission School.

It might just be that his St. Louis roots, his studying marble sculpture in Italy as a younger artist, and his deep love of jazz (and his collaborations with musicians such as Julius Hemphill) have formed him into the sort of intellectual that is simply not confined to one region or time. For these and many other reasons, his subdued practice shows an intense interest not in being a “style” but rather in revealing philosophical and phenomenological moments. 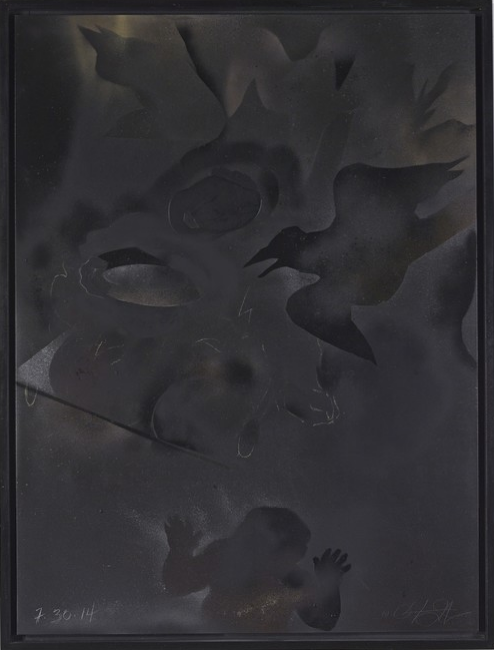 My favorite works are the back of the small gallery in Burning in Water — three paintings (Paintings No. 6, No. 7, and No. 12). At first they appear to be monochromatic black from a distance, but they change as one approaches. Although the surfaces are indeed black, he has used both shiny and matte paint to make textures, figures, and animal forms. The effect is that they emerge only as you get close. He squeezes in a literal kaleidoscope of techniques within the blackness. He is showing us that he understands his materials so well that he can transform a non-binary into a binary and back again. It’s quite a trick. 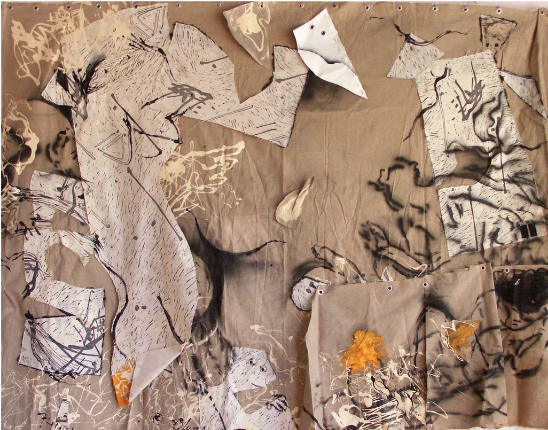 At the very front of the gallery is Jackson’s scene-stealing — yet glibly titled — Tapestry #1, 2011. It is, strictly speaking, not a tapestry, but a sprawling eight-foot long conceptual gesture that seems to want to be a painting and a sculpture at the same time. It’s made up of layers of raw linen, cotton canvas, and various fragments sewn, glued, and painted on it. Cut-out shapes feel like animated figures while other sections of fabric are folded and then riveted (literally) to the backing linen. The mark-making, the flow of fragments, figures — and gestural painting in sections — give the impression of a music score or a still frame from a film. It’s not a static work at all — the surface has energy and depth. But if one were to ask what it all meant, well, there aren’t many clues about its meaning in the title and so it poses only questions and gives no answers. My best guess is that it is like the other work in the show, and it is about looking.

The key work in the show is a large wall hanging/painting/collage that includes a large blue cut-out of bodies against a white background. He implies the figure with both elements of the positive and negative pieces of the studiously cut fabric. It has the effect of making a body that appears to be in the process of both being created and falling apart at the same time — depending on how you look at it.

In an art historical sense one might perceive the figures in his otherwise abstract paintings as an attempt to resolve or at least investigate the space between abstraction and figuration. That would be wrong. His figures are not trying to become something else, they exist in between states — being and becoming, living and dead, dreaming and awake. In this way Jackson walks away from a strictly Western approach to meaning (and the canon of contemporary art) and instead embraces a spectrum of cultural references that can vacillate from ancient and tribal art to a strict focus on materials and what they themselves mean. Jackson is not just in dialogue with his contemporaries, he is in dialogue with art history itself.

Several of his wooden figure sculptures in the show are decidedly anti-monumental and have as much in common with West African and Oceanic sculpture as they do with works by someone like Richard Tuttle, whose aesthetic is also notoriously hard to pin down. Like Tuttle, Jackson’s work has an evasive grammar, possibly made up of verb-like gestures in the sense of hanging, leaning, resting, folding, staining, ripping, falling.

But there is more involved than just grammar. Jackson is fond of the conceptual gesture, which is clear in his Wood Figure 1 and Wood Figure 2. Both appear to be, as their titles suggest, figures; abstract as they are. Yet one has to do a double-take because upon close inspection they are not just what their titles imply — wooden figures. Instead, they are paintings that have been ripped apart, with the frames broken into sections and frozen in place like the bones of a body. Like in his other work, it’s not entirely clear whether we’re witnessing an act of creation or an act of destruction. His motifs are present if you look — faces in profile, birds, flowers — but there are few clues. He leaves it to the viewer to figure out if the things are coming together or falling apart. Fair enough.

My guess is that, given his upcoming show at the National Gallery of Art in Washington, DC next year, things are definitely coming together for Jackson.