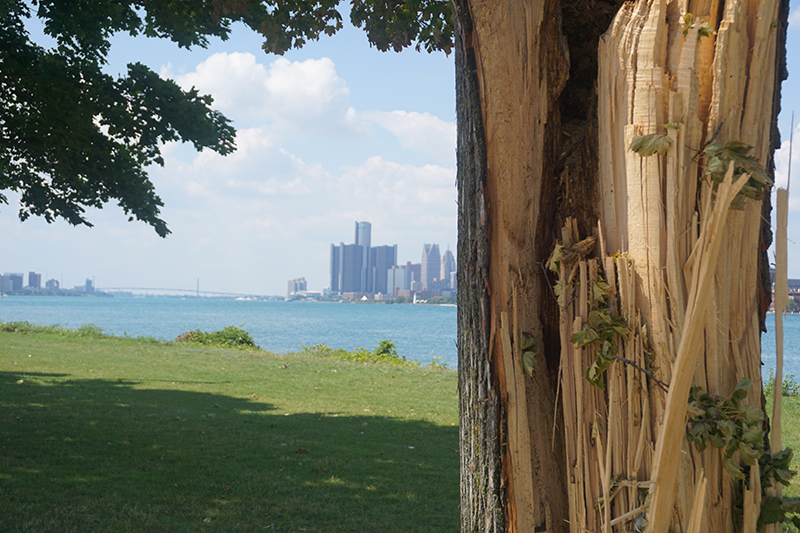 — Alexis Pauline Gumbs, M Archive: After the End of the World

It takes time to penetrate the core of the ecosystem here. There is a thinly veiled layer protecting the city’s true essence, which contains oracles and their descendants. A community within a community, visible only to those worthy of bearing witness to the superhuman organisms that exist within. The lineages within this microcosm are results of the seeds that Boggs, Randall, and Hicks planted years ago.

Detroit’s core is unlike its seemingly shiny surface, the one that masquerades as a haven for industrialists who wish to impose their machinations on this 140-square-mile city. Those who arrive to our post-Fordian landscape will see first an influx of new industry and sterile models of negro removal under the guise of sports arenas and public art. They will encounter folks who regret Amazon’s decision to not move to the city to “provide jobs.”

This other Detroit, so far from its core, has organisms that are fully-developed cyborgs, no longer in the preliminary stage of their evolution from man. These humanoids were shipped to Detroit from Seattle, San Francisco, and New York City after the city’s bankruptcy, and now occupy the recently redeveloped downtown and midtown areas. They have been programmed to work in the city’s new housing lender corporations, to sell “non-prime” mortgages (an extension of the subprime loans that led to the 2008 financial crisis) to impoverished residents in Detroit who are recovering from foreclosure. Those same corporations recruit the remaining humans in Detroit, expanding their evolutionary workforce.

The city and state governments applaud technological advancements implemented by corporations because the humanoids don’t need clean water or quality education. Once all residents are fully recruited, they will be programmed to do nothing but labor.  And soon enough, the city and its corporations can complete the water shut-offs throughout Detroit, ensuring a full recovery from bankruptcy.

And yet, if visitors look closer, dig deeper, pay attention to the current that hums beneath what’s visible, they will find that the superhuman organisms still remain at the city’s core. This persistence is not unlike what Ben Williams has termed “Black secret technology.” (Yes, Detroit is still very Black.) An undefinable Black, that is as pointed as the improvisational relationship between an organ player and his pastor at Tabernacle Missionary Baptist Church — my childhood church, where I first developed my beliefs around a power greater than myself — and as diasporic as the N’kisi outdoor sculpture installation at Dabls’ MBAD African Bead Museum, housed right across the street. This technology sources itself from an ancestral knowledge that has survived the Middle Passage and the Great Migration.

This city core is constantly in a state of churchicality, one rooted in a desire to escape through procession, testimony, and gospel. My churchicality is exclusive to Detroit, and may take place on the dance floor over a Osunlade set, or in fellowship with many artists in this city, persistently imagining how we can labor in ways that make us most happy.

These past few years, I have been in congregation with Detroit-based abstractionist Allie McGhee. Our relationship began with my wanting to write about him; despite his talents, his work has yet to receive any in-depth analysis and contextualization. I meet with McGhee on a monthly basis, collecting oral histories and talking with him about his practice (and many other things). This space for orality between a seasoned Detroiter and myself has become therapeutic for us both. After living nearly eighty years on this earth, McGhee has acquired a breadth of wisdom that always makes for an insightful dialogue. 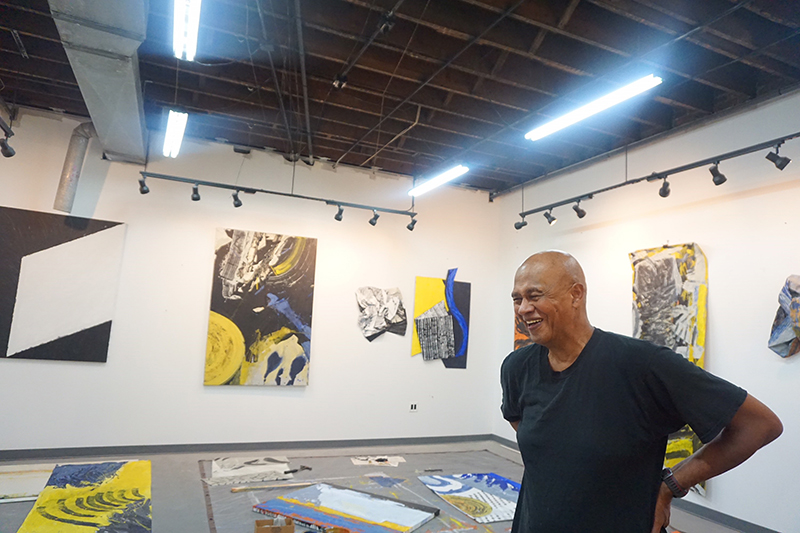 Allie McGhee in his studio.

McGhee came of age in the 1960s as a figurative artist during the height of the Black Arts Movement, the Civil Rights Movement, and the 1967 riots in Detroit. He often depicted a monolithic marginalized figure (or figures) in his early paintings, feeling it his duty to provide a literal representation of the plight of Black communities in Detroit and the nation during this time. He speaks often now about how making these works only made him angrier. This unwanted anger prompted him to re-evaluate the type of works he wanted to create. Like other Black artists during the 1960s and ’70s, McGhee moved to abstraction and particularly relied on NASA research and other cosmological discourses as points of departure for developing his own form.

I often visit his studio weighed down by both local and national legislation and leadership that continue to disenfranchise Black and brown people. On an unusually warm November Saturday afternoon — shortly after the one-year anniversary of the 2016 presidential election — McGhee and I caught up as Miles Davis’ Sketches of Spain played in the background. After I shared the root of my fatigue, he calmly began to discuss (with a Neil deGrasse Tyson-type of cadence) the power in knowing that there are worlds we will never know, worlds that outweigh the reality and power of any fascist leaders. He reminded me that the changes we experience in a lifetime are relative to the changes over the millennia predating human existence. Sure, this philosophy is esoteric. It did not stop me from making calls to my senators. But it put me at ease.

I often think about Allie and his beliefs in the unknown, and how they run parallel to many of the optimistic futuristic beliefs bubbling in this city among organizers, activists, and arts practitioners. A specific type of speculative fiction and cosmological awareness is present among the communities here. These stories about and meditations on the future are more than just a genre: they have become an imagination-tool that time and again has allowed Detroiters to conceptualize a world beyond our immediate realities. The underbelly of Detroit (mostly marginalized) is in a constant state of imagination as a means of survival.

In “Deep Sea Dwellers: Drexciya and the Sonic Third Space,” Nettrice R. Gaskins reminds us of the origin myth conceptualized by Detroit-based electronic music group Drexciya. The story envisions an underwater country populated by the unborn children of pregnant African women thrown off slave ships during the Middle Passage. The children came into the world knowing how to breathe underwater.

Last week, I listened as Tawana Petty, a Detroit-based poet and water rights activist, testified to me and group of community members, artists, and writers over an intimate dinner. She talked about how moved she was by the gratitude she encounters when she delivers water to elders who have had their water shut-off — a grace that knows no bounds.

Just like water, food has run scarce in the city since many major grocer corporations left after 2008. Malik Yakini, Executive Director of the Detroit Black Community Food Security Network, and thousands of other community gardeners have used acres of vacant land to change our relationship to food, so that we may consider and reject reliance on corporations for sustenance.

At this year’s Allied Media Conference, I attended a screening of moving image projects created to shift the hyperbolic narratives associated with Detroit’s resurgence. Facilitated by The Detroit Narrative Agency, I saw the pilot episode for Femme Queen Chronicles, a series about the lives of four trans women living in Detroit. Co-written and directed by Detroiters Ahya Simone and Paige Wood, it’s a witty, humorous celebration of the lives of Black trans women — a salve for the hyper-visibility of Black trans women’s deaths.

Through this array of resilience, I am reminded of the ways Detroiters have been able to remain graceful, creative, and clever in their adaptations. Detroiters’ resistance to dominant powers (divestment of resources, corporate takeover, and even corporeal death) is ingrained in the fabric of our mundanity.

You see, the end happened here first. Organisms left for dead morphed into a hybrid species, one that could accommodate the amorphous and ever-changing climate. After they survived the bankruptcy they discovered — in Octavia Butler’s words — that “Through learning adaptation, / [they would] Become a partner of God.”

Since I moved back to my hometown four years ago, I have had the pleasure of holding court with many artists like McGhee, whose skills are not limited to art-making. They have taught me what they know. How they managed to thrive when everything else gave up on them. They taught me that having an artistic practice is more about the means than the end; the process of making is the true reward. These artists are organizers, oracles, shapeshifters, mountain movers, deep thinkers, and most of all, generous educators. They have let me into their fold. 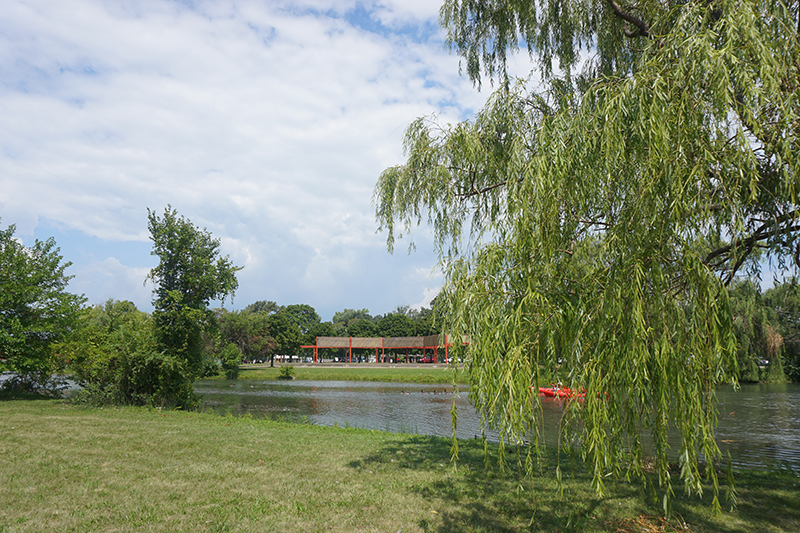 By virtue of divine energies, the writer, facilitator, and pleasure activist adrienne maree brown has been present in my life in one way or another these past four years. I was exposed to her work primarily through word of mouth. Many people talked about adrienne as if she were a cosmic being who descended from an outer realm with one purpose: to teach us more about the pleasurable ways of being and relating to one another. I have come to believe this myth. adrienne was the first person to teach me, through facilitation, how to be vulnerable in a group, the magic that happens once we let go of fear and trust the people around us.

In her recent book, Emergent Strategy: Shaping Change, Changing Worlds, brown (through the philosophies of Octavia Butler) reminds us of our ability to adapt to change and the rewards that come from momentous transitions. “How we live and grow and stay purposeful in the face of constant change actually does determine both the quality of our lives and the impact that we can have when we move into action together.” Throughout much of her writing, brown uses water as a guide for how we can be more intentional in our agility:

Together we must move like waves. Have you observed the ocean? The waves are not the same over and over — each one is unique and responsive. The goal is not to repeat each other’s motion, but to respond in whatever way feels right in your body. The waves we create are both continuous and a one-time occurrence. We must notice what it takes to respond well.

If Detroit and its people were an element, it would be water; responding to, but also implementing change. In recent years, this notion of transformation has become a metaphor for the city. Change here has different meanings, depending on who you ask: For a newcomer it may mean opportunity, while for a life-long resident it could signal loss. We work to respond to and resolve these inevitable vicissitudes. We speculate and fabricate worlds to counter the dystopic exterior permeating and compromising Detroit’s core. We encourage a praxis of transformation, not by way of purging but by way of preservation.