When was LAND AND SEA founded, and why?

LAND AND SEA was founded during the final moments of 2009 by Maria Otero and Chris Duncan. New Year’s Eve we committed to the project, and New Year’s Day we named it while hiking around Dillon Beach — LAND AND SEA seemed fitting. Maria (Maggie) will always tell you she’s the SEA.

LAND AND SEA came about because both Maggie and I were missing something. A long-term zine/publication project I was working on called Hot & Cold (with Griffin McPartland) had recently ended. I expected relief, but soon realized I was feeling pretty lost without that outlet. Similarly, Maggie had come up in the Adobe Books scene and took a break as her interests broadened into Bay Area food culture. So she was missing something, too. We are a couple, we trust each other’s ideas and aesthetics, and we both enjoy working with and supporting other artists’ visions, so it just seemed to make sense to do this together. The “this” at the time was a small press that focused on intimate, limited-run artist books. Very soon our backgrounds in organizing gatherings/events became an equal part of the press, and we also began realizing we didn’t have to be bound to making books — we could make whatever we want! Our first gathering under the LAND AND SEA moniker was at Grace Cathedral in San Francisco to celebrate the release of a seven-inch record by a band called Coconut (fronted by Tomo Yasuda and Colter Jacobsen). It was magic.

We both come from scenes and subcultures that propagated the ethos of giving more than you take. That’s LAND AND SEA — a small independent publisher and nine-hundred square foot project space in Oakland, California. Our logo is a mashup of The Germs’ and Black Mountain College’s logos… perhaps that says it all? 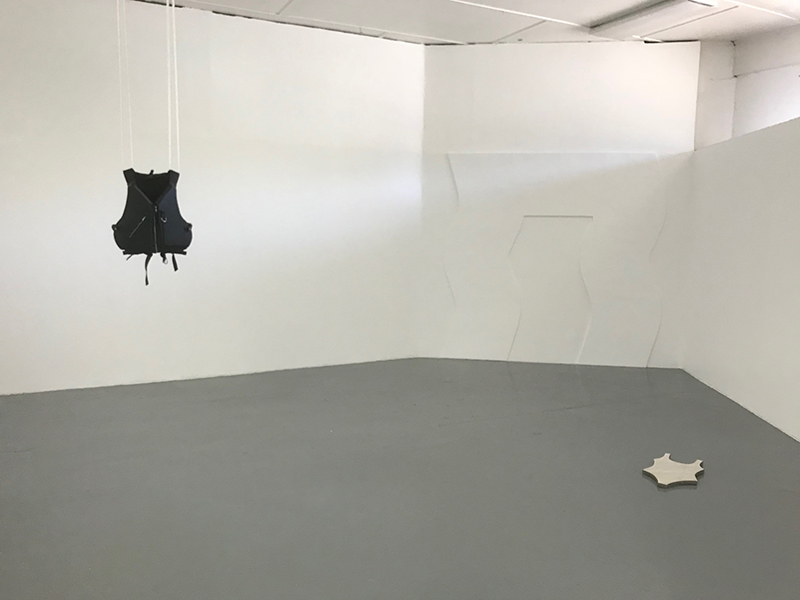 Our audience is anyone who will listen, attend a gathering, or buy a book/record/print/tape. As a press, our priority is serving the artist/s we are working with. If we make a great object for them, then we are excited, the artist is excited, and ideally our/their community is excited enough to purchase said object.  With regards to our project space, we hope to provide a venue conducive to experimentation. As exhausting as it can be sometimes, make no mistake — we need this.

On your website, you refer to your SOUND AND VISION gallery space as an “extension of” your publishing endeavors. Can you tell us about that relationship? Have you found that hosting a physical space serves or influences the publishing side of LAND AND SEA, or vice versa? Is one more crucial than the other?

For years, every time we made an object we searched for places to host gatherings, or we made an object because an artist was having an exhibition and it seemed fitting to pair up, as the energy was already in place. Events and gatherings always felt just as good to us as making a book, so when we started renting the studio, programming and hosting became the next logical step. Our first show in February of 2015 was a beautiful installation and performance by French artist Felicia Atkinson.

As a press, we can only do so much given the financial realities of production. There’s a lot of consideration that goes into making a tangible object beyond cost as well — a larger commitment of time, energy, and circumstance. If somehow we were independently wealthy or had financial backing this would not be an issue. But it is. LAND AND SEA publishing is a 100% out-of-pocket labor of love. Truthfully, the space came at a great time for us because it was getting harder to come up with money for print projects. 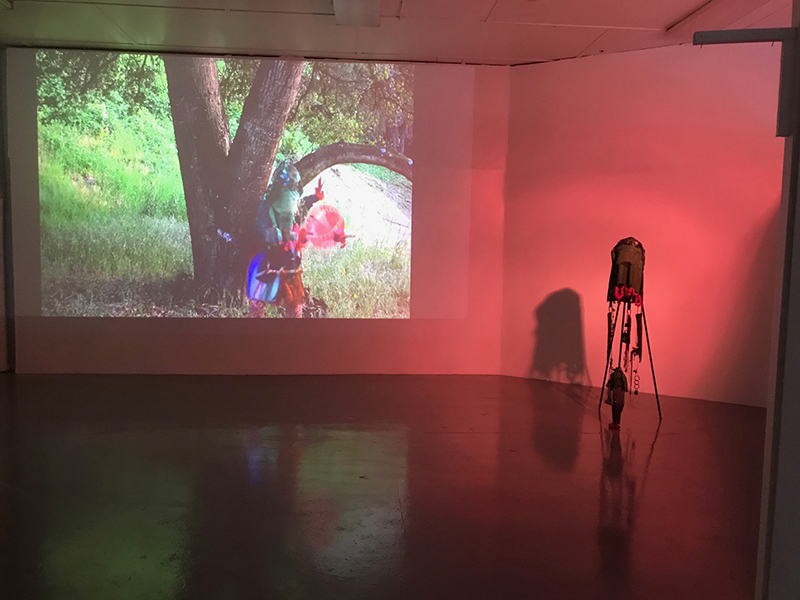 We have slowed down to only a couple of releases a year. The space fills the gaps between our physical editions and allows us to work with such a wide variety of people, some of whom it wouldn’t necessarily make sense to make an object with, whether financially or conceptually. LAND AND SEA as a space is just an extension of our ethos in real time — to work outside of institutional red tape that often feels impossible to navigate, and to maintain a physical platform that facilitates intimate, often non-commercial, gatherings.

Do the publishing side and the project space side influence each other? Completely. Perfect example being two recent editions made in response to two recent exhibitions at our space: Lauren McKeon’s HUMANITY SPECTRUM booklet and Dionne Lee and Nkiruka Oparah’s Meeting Place booklet. Both editions exist as companion artworks to their respective exhibitions, not as catalogs, and both are extremely beautiful objects. We make our own rules, stay sensitive and stay open, function outside of a formal exhibition calendar, and purposefully engage along blurry lines. 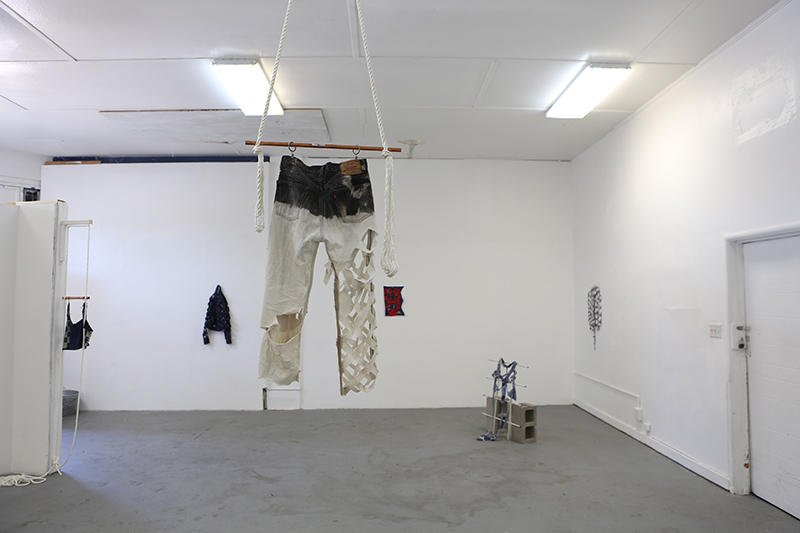 You’ve worked with dozens of artists over the years, many of whom call the Bay Area home, and many of whom don’t. Being that you identify as a community-oriented organization, can you speak to the parameters of your curatorial mission and/or sensibility and how you see it fostering community, particularly in an area dealing with the violent ramifications of rapid gentrification?

Maggie and I have never sat down and identified what our curatorial mission might be. We just want to be moved, challenged, and made to feel alive and awake. We have this great space — art looks good in there and we have access to an amazing sound system. We want to share it. We have friends and co-conspirators from all over. It feels good to offer a creative home to them. Over the years, we have seen so-called economic development lead to the disappearance of many places where people can perform, experiment, or exhibit in Oakland  (especially following the Ghost Ship fire). And in our own way I think we stepped up by opening our doors.  We want to be fluid in our programming, to be able to say yes when other places say no. We have had the honor of hosting a young artist like Hanan Sharifa one day and the next a veteran sound artist like Maggi Payne. We believe in perpetuating a level playing field that’s not about who’s who, but what’s what.

Our relationship to gentrification feels complicated. Some will see an art space as the first wave of gentrification. They are not wrong. The change we have seen to the neighborhood (Golden Gate) that LAS borders is real and was set in motion long before we moved in. We tread lightly, treat everyone who walks through our doors with respect, and keep a low profile. 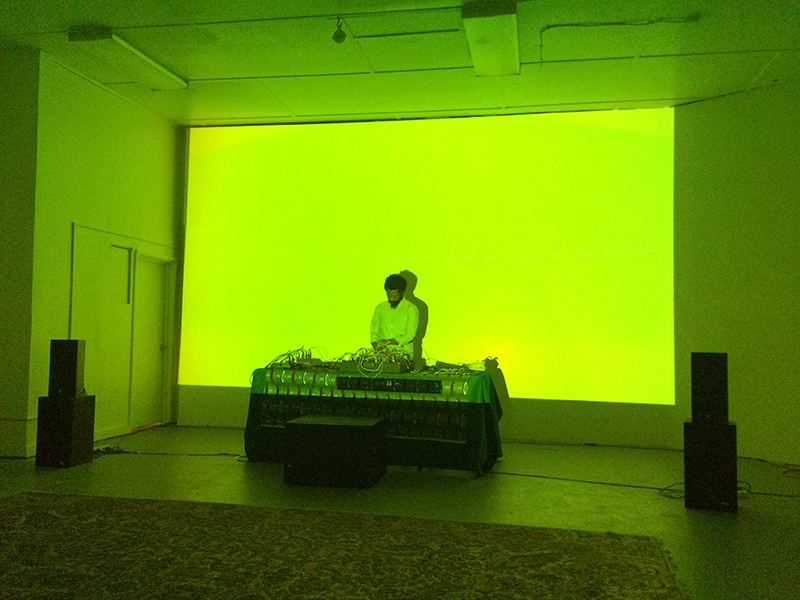 How is LAND AND SEA structured? How many people work as part of the organization? Staff or volunteers or both — or some other configuration?

Structure, if you have not figured out by now, is something we have steered clear of. That said, it’s me and Maggie. We do everything. Ideas for the press and exhibitions are collaborative. Maggie generally takes the lead on designing books; I do the posters. We take turns being main communicator with artists. With regard to performances in the space, I set up the PA and run the door. Over this past year of programming I think we really dialed in how we will continue to use the space: three to four exhibitions and about twenty performances a year.

We have three kids so all of this is pretty much a crazy juggle. I think we have been absent from two or three gatherings at the space. Sunfoot performed while we were at the hospital giving birth to our daughter Robin. September 29, 2017.

Are there any performances or publications that strike you as particularly memorable or emblematic of what LAND AND SEA does?

There has been magic every step of the way… absolutely profound moments. Robert Aiki Aubrey Lowe’s performance. The one and only time (as of yet) that Michael Morley and Bill Orcutt performed together. Danishta Rivero/Voicehandler — every time. Cynthia Connolly’s Banned in DC slideshow. Paul Clipson and Liz Harris’s exhibition. Frank Haines and Cedar Sigo’s book release performance. Ashley Bellouin’s record release show comes to mind. We hosted exhibitions by powerful Bay Area artists José Figueroa, Lauren McKeon, as well as the aforementioned Dionne Lee and Nkiruka Oparah. We were really moved by the depth and generosity and complexity of those shows. Our most recent book is by Ben Peterson, and chronicles roughly five years of investigation into the influence and execution of his stunning sculptures; we’re very proud of it.  Most of all, Maggie and I are grateful for our time with Paul Clipson, who passed away earlier this year. We made an amazing book with him called REEL, and ended up showing his films at our space numerous times. His fervor and excitement was intoxicating. He is a vital part of what we are and is painfully missed. 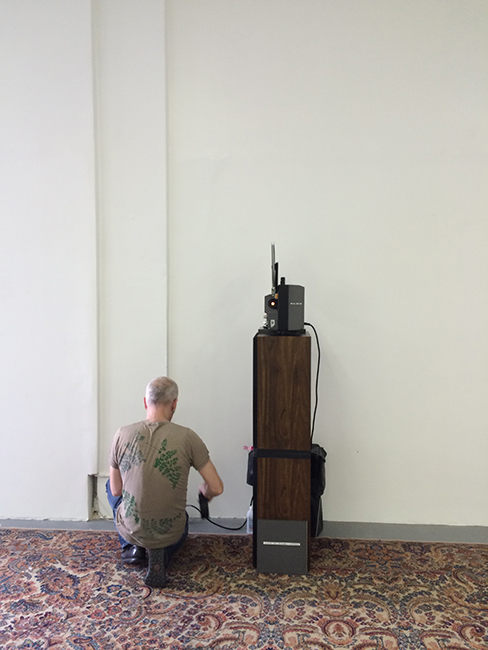 Can you tell us a little about your individual practice(s), and how they interface (or don’t!) with LAND AND SEA?

Outside of LAS, Maggie has a small paleta business called Pop-Pop Paletas. The space doubles as my studio. So when there’s not an exhibition or performance it’s filled with my own sounds, sculptures, and paintings. The way I have been making work and my own relationship to time is determined by how LAND AND SEA is operating. Sometimes everything feels the same, sometimes there are clear distinctions.  Aesthetically, there is some cross-over between the use of repeated and patterned text, which is a hallmark of LAS, and my own work. That said, when it’s not my studio, LAND AND SEA is meant for others.

By far the greatest challenge is financial sustainability.

What else should we be asking you?

Ha! Not sure… Read what I wrote, perhaps that will spark more questions? This could probably use some edits… I write like I talk I guess.