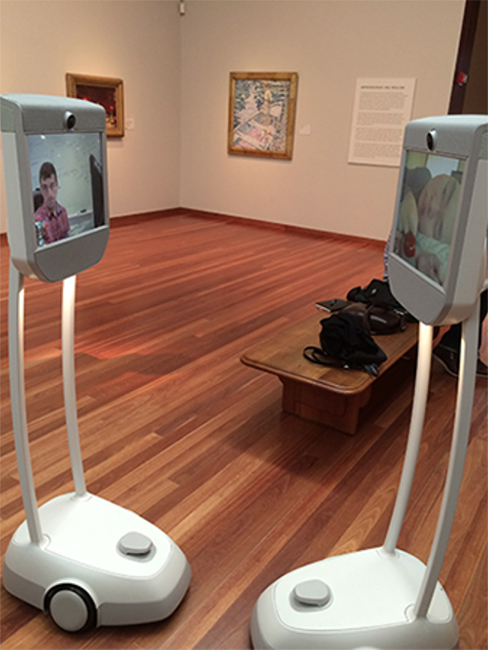 The Beam. Courtesy the de Young Museum and Rebecca Bradley.

On a recent Monday this spring, a homebound five-year-old visited the permanent collection of the de Young museum in San Francisco using the museum’s Beam. The Beam is a telepresence robot with a computer monitor-sized screen, a camera atop a set of curved legs, and a simple wheeled base that create an anthropomorphic effect — particularly because the screen displays the face of the user about five feet from the ground.

On this occasion, the Beam and its user roamed the gallery spaces while the museum was closed to the public; in the future, Karen Berniker of the de Young’s Access Program hopes to combine Beam tours with regular Access days (when the museum offers tours of special exhibitions with extra accommodations for visitors with disabilities).

Kavita Krishnaswamy, a doctoral researcher in computer science with a rare neuromuscular disorder, has movement in only one finger and cannot leave her home. Using the Beam, she has traveled to academic conferences and defended her research, interacted with researchers at Microsoft and the Mobile World Congress in Barcelona — and visited museums like the de Young, the San Diego Air & Space Museum, and the National Music Museum. 1 The device “brings a new life of profound freedom,” Krishnaswamy wrote in an email.

The ability to “navigate independently” in particular allows Krishnaswamy to enjoy museum experiences “rather than focusing on getting someone else’s assistance to do it.” When I asked her what other technologies she has used to visit museums in the past, her response was blunt: “There are no other assistive technologies that could have helped me.” 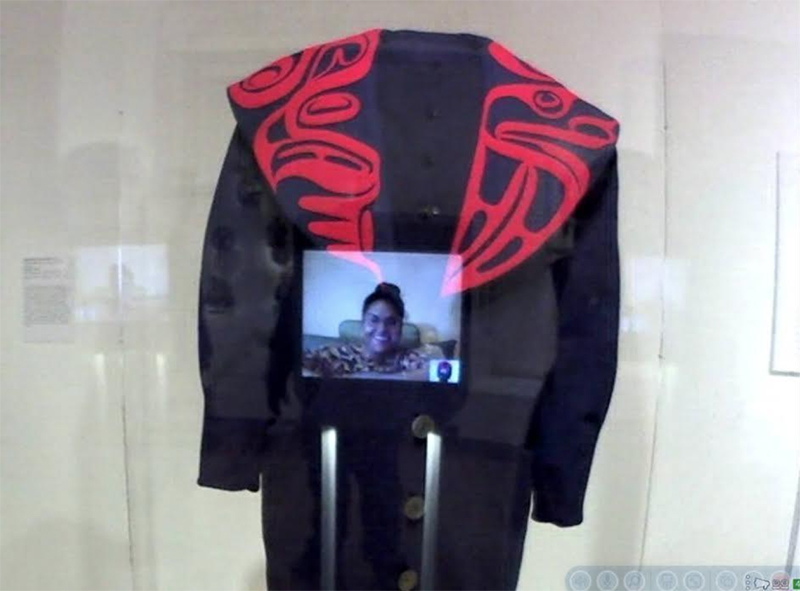 The technologies comprising the Beam are not new: remote-controlled robots date back to the mid-twentieth century, and the two-way camera and screen for telepresent communication were firmly established almost twenty years ago. But adding a video chat function to an anthropomorphic robot and enabling it to be operated remotely is radical in its application, making visible and giving control to people who would otherwise be absent.

Facilitating situations in which people with disabilities act and interact autonomously in public cultural spaces has political ramifications that begin to answer Johanna Hedva’s concerns. In “Sick Woman Theory,” Hedva describes the invisible protester who cannot leave her bed; she begins with the problem of political presence in reflecting on her inability to physically attend protests. The inability to be present in museums is a different kind of political erasure; by not having access to information about their cultural heritage, and — crucially — how it is framed, citizens are obstructed from intervening in dominant narratives. 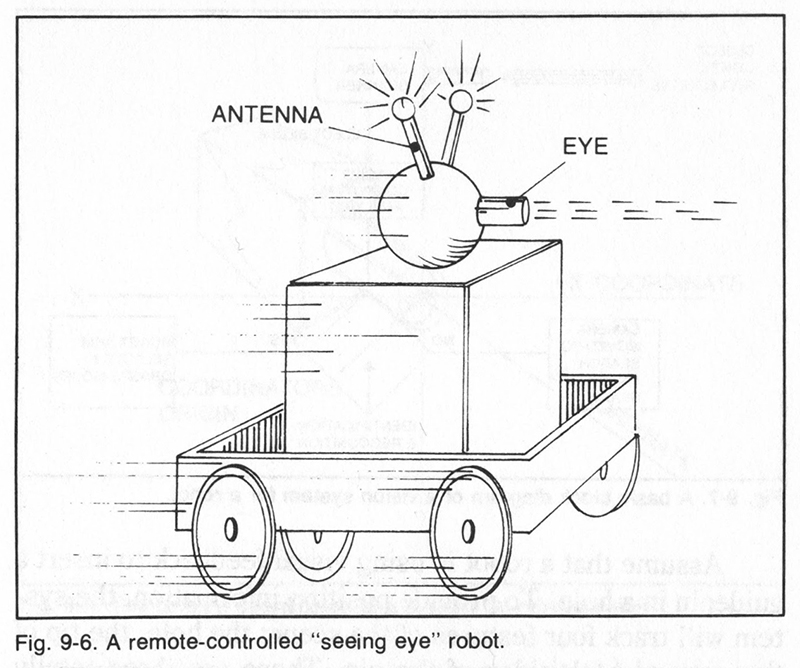 Many “universal” technologies were originally created for specific people with disabilities by those who loved them. Alexander Graham Bell, who was married to a woman who was deaf and taught at schools for the deaf, designed the telephone as a kind of hearing aid. The modern typewriter was created by Pellegrino Turri in the early nineteenth century for his friend (or lover, depending on whose account you read), a countess who was blind and unable to write.

These stories, especially numerous in the history of communication technologies, run counter to the narratives of singular “geniuses” like Steve Jobs, who invent devices for a homogenous swath of consumers. Innovations like the typewriter are, rather than what we now call universal design, examples of inclusive design; when we encounter objects through the lens of inclusive design, we see a very different history of technology.

August de los Reyes, a pioneer in formalizing inclusive design as a process, has described the creation of solutions for singular people as “love stories.” Inclusive design as a practice involves first examining overlooked individuals or communities and creating for them: solving for specific people rather than abstract problems. This results in better products for everyone, and a more streamlined process that often obviates the need to add accessibility layers later.

The rise of inclusive design is deeply connected to the shift from a medical to social model of disability, a related set of approaches that understand disability not in terms of health, but as a mismatch between ability and the (designed) environment. In 1976, the UK organization Union of the Physically Impaired Against Segregation (UPIAS) defined disability as “the disadvantage or restriction of activity caused by a contemporary social organization which takes little or no account of people who have physical impairments and thus excludes them from participation in the mainstream of social activities.”’ In 1983, Mike Oliver, an activist and disability studies professor at the University of Greenwich, coined the phrase “social model of disability” and described it in his book Social Work with Disabled People as “nothing more complicated than a clear focus on the economic, environmental, and cultural barriers encountered by people who are viewed by others as having some form of impairment — whether physical, sensory, or intellectual.”

Whereas a medical model of disability states that people are disabled because of their own differences or “impairments” (which should be “fixed” by medical treatments, even when these differences cause neither illness nor harm), the social model shows disability to be caused by the way society itself is constructed. As de los Reyes says, “Disability is a design problem. Disability is itself designed.”

The Beam was invented in 2012 by an engineer at Suitable Technologies, an able-bodied person who, frustrated by the limitations posed by remotely joining an in-person meeting at the office, simply added an iPad to another robot Suitable was developing. It wasn’t originally intended for those with disabilities at all — except this engineer wasn’t able-bodied if we understand disability not only as a socially-created condition, but as a fluid, context-dependent design problem. The engineer who couldn’t be physically present at a meeting was experiencing, temporarily, something akin to the condition of the homebound five-year-old who used the Beam to navigate a museum a few years later.

We have all experienced disability, de los Reyes explains, “whether it’s having your hands full carrying groceries and not being able to open a door, or using closed captioning while watching an airport TV.”

In an interview with Rhizome, artist and design researcher Sara Hendren describes the fluidity of disability at length:

…being “disabled” is not a fixed and assigned identity. It is not about a body status or a capacity level, but much more about this very complex, changing, evolving, and perhaps temporary, perhaps longer term, political state — in some ways, similar to how we’ve come to understand the slippery designations of race and gender. The built environment and socio-political institutions all make allowances and disallowances for certain kinds of bodies and capacities, and those affordances have ripple effects in cultures, creating abled-ness and disabled-ness. And disability is a status that is always in flux: you enter into different seasons in your life where you are more or less bodily and cognitively able to access those institutions, avenues of social mobility, and so on. 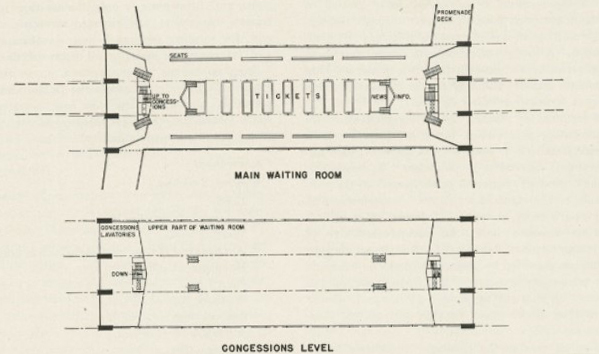 Diagram from Airport Planning by Charles Froesch and Walther Prokosch, 1946. Courtesy of the Prelinger Library.

Airports and museums serve as important examples for de los Reyes, who says that people are often temporarily disabled in these spaces. Airports are designed for cognitive difference, with visual imagery and clear wayfinding to address and enable those who can’t read a given sign or experience communication barriers. They are also exceptionally physically accessible in their attention to the movement of passengers carrying luggage and wheeling suitcases behind them. De los Reyes describes standard museum layout as an analogous mode of inclusive design: patterns and a common tread guide you through the space, whether or not you’re aware of the cultural narratives behind an exhibition. In this way, inclusive design has always been a part of curatorial practice.

I am a regular volunteer with the Access Program at the Fine Arts Museums of San Francisco. On Access Days, I have learned that dominant cultural narratives, the kind reified in old-school exhibitions of historical Western European art, can be subverted as much by the presence of people who would have been absent when these works were first hung in salons — visitors who require different designs to enter gallery spaces and inspire different interactions with the art’s gatekeepers — as by the most critical art historians and activists.

The Beam tours have renewed for me the importance of fostering that moment when a visitor decides to linger in front of one work. The experience of following a Beam around the gallery as someone else chooses, perhaps for the first time, where she will go and how long she will stay there, is a lesson in sovereignty.