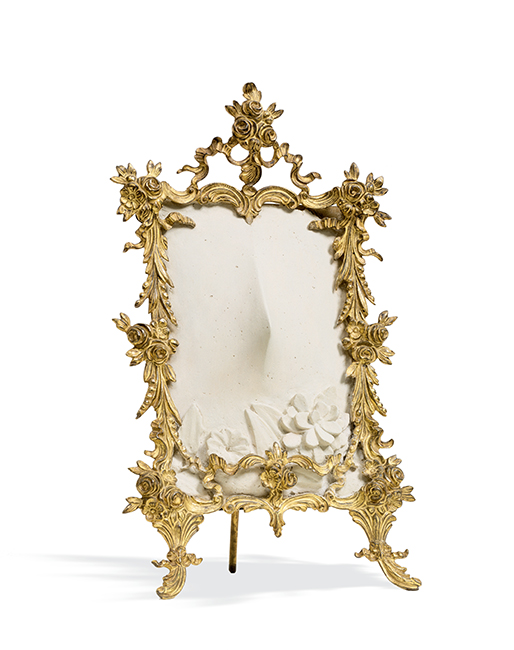 A small object can pull you toward it like a magnet. I’m partial to the experience of seeing “an enormously tiny bit of a lot” as Meret Oppenheim wrote in a poem. My first apprehension of Miss Gardenia was of an astonishing object, an enigmatic presence, in the old SFMOMA sometime in the late ’80s. The air around her was palpably charged; everything else receded from view and a dense silence radiated.

One might imagine a dream in which Meret Oppenheim encounters a Cycladic goddess at a flea market. In conjoining opposing energies of simplicity and baroque excess, Miss Gardenia contains vastness. Curving plaster forms a convex ridge in the center of the relief, bringing to mind a lover’s hip bone or the base of her throat. In inverse relationship with Duchamp’s Female Fig Leaf, its sexiness is more allusive. The austere plaster surface morphs towards the bottom edge of the ornate gilt frame in a slow reveal of flower and leaf, a ghostly fusion of forms.

Another memorable sighting came during Gorgeous, the 2014 exhibition that commingled works from the collections of the Asian Art Museum and SFMOMA. The shimmering curtain of Felix Gonzalez-Torres’ Untitled (Gold) parted to reveal Miss Gardenia poised between the golden veil of beads and the sublime Mondrian Composition (no. III) blanc-jaune / Composition with Red, Yellow, and Blue. A Qing dynasty deity nearby completed the party.

In 1936, Oppenheim created the work for which she is best known: Object, the fur-covered cup, saucer, and spoon which sent shockwaves through the culture. Alfred J. Barr Jr. purchased Object for New York’s newly established Museum of Modern Art for $50 (half the asking price), the first work by a woman acquired by the museum; as a consequence, Oppenheim is called the First Lady of MoMA. But the huge attention given to this one work dismayed the artist and, as she recounted, the fur cup became “her prison.” For some years her doubts and melancholy made work difficult for her, yet she persevered. Her early works proved generative and her explorations deepened.

As a painter, I often work with variants of white and black. I’m interested in how the myriad colors contained in these opposites create space. Part of my ethos is to try to do the most with the least. What draws me to Miss Gardenia is that within its seductive surface, akin to a white-ground lekythos, there exists a space both intimate and expansive, a fathomless mystery embodied in humble and faux fancy material of modest dimension. 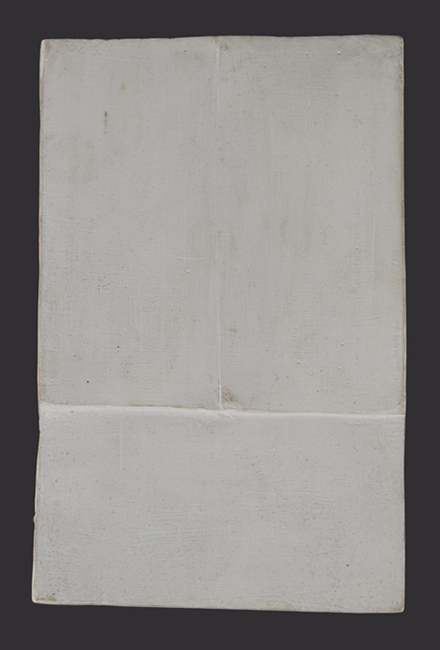 In her “Translator’s Note” to Marcel Proust’s Chardin and Rembrandt, Jennie Feldman writes of amitiés (friendships), a term used by Proust in recognition of the profound connections we perceive between things. In my mind’s eye an amitié hovers in special proximity to Miss Gardenia and Cycladic Book, a small plaster relief by the Greek-born sculptor Chryssa. I had long known of Chryssa’s Cycladic Book series but had not seen one in person until this year, in the collection of the Berkeley Art Museum. Reverberating through time like emissaries from an archaic realm, these remarkable works speak in secret language to the present moment. 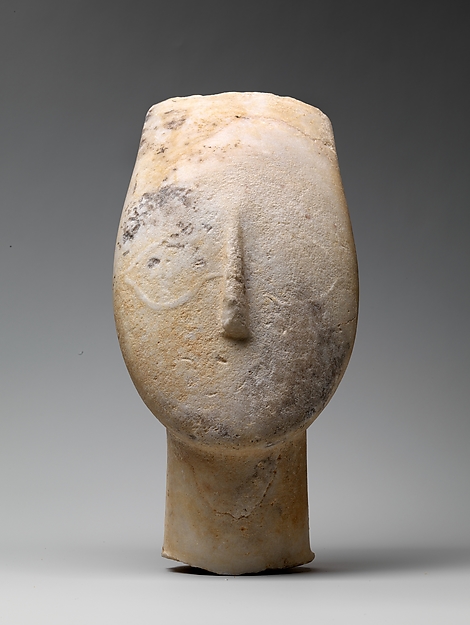