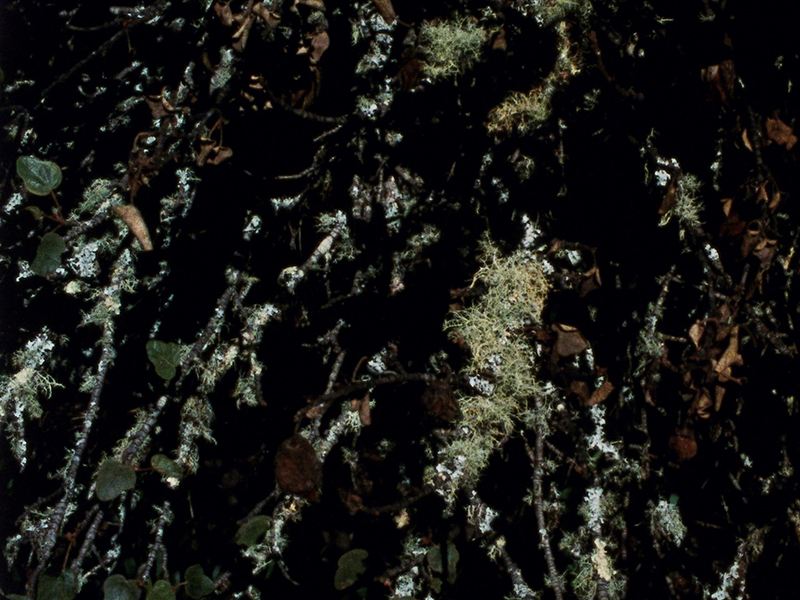 I am not interested in photographing nature, but I need subject matter.

Am I not partly leaves and vegetable mould myself?

Since Triste (1996), Nathaniel Dorsky’s subject has been light: natural light bouncing off a car hood or mitigated through a screen of variegated leaves, light reflected and refracted through revolving glass doors, artificial light from dizzying downtown digital displays or nighttime neons, heavenly light shining from above casting shadows on walls or streaming in shafts through San Francisco’s mists. His focus runs from crisp to soft; the exposure is equally fluid. Nick has a deep knowledge of the difference between what his eyes see and the image his camera captures. He is always aware that this seen world will be transmogrified by the Bolex into a two-dimensional, rectangular moving image (projected at silent speed of eighteen frames per second) to be viewed on a reflective screen. 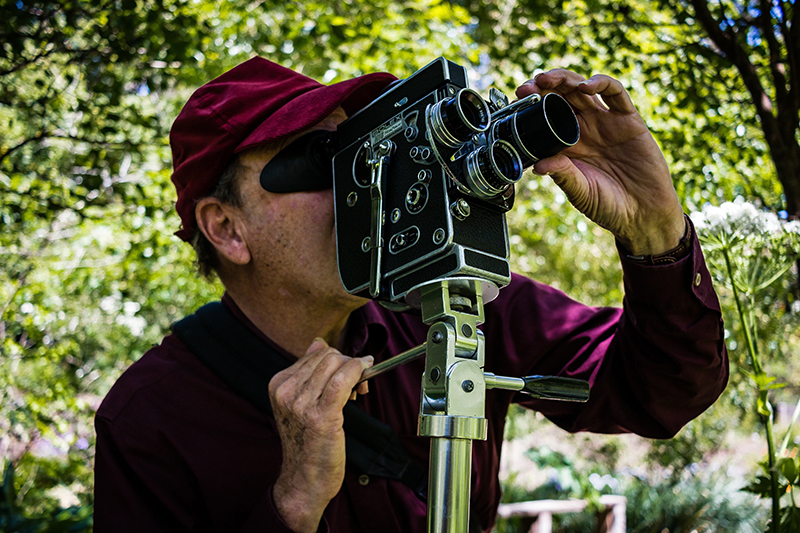 The Arboretum Cycle consists of seven autonomous works shot on Eastman color negative film in Golden Gate Park’s Strybing Arboretum. On 2017’s Lunar New Year, Dorsky made the short stroll from his studio to the Arboretum, a fifty-five-acre collection of global plants, to contemplate his next project. After meditating there for five afternoons, he was inspired to create a film that illuminated the special quality of light radiating throughout the garden. Thus Elohim, the first of the cycle, was born.

The Arboretum Cycle grew as organically as any plant in the garden, one film leading to the next as the seasons progressed; Epilogue, the final work, was sent to the negative cutter a few days before New Year’s Day 2018.

Elohim (a Hebrew name referring to the original gods or spirits of a place) serves as a primer: with the exception of an early shot that meanders down the mottled light of a flower stalk, the camera position is fixed; the image varies only in focus or aperture opening. Any movement within the frame is the result of wind or the chance flight of an insect across the field of vision. These self-imposed strictures are reminiscent of the Oulipo movement, which employs rules not as ends in themselves but to trigger the mind to find unexpected ideas and inspiration.

While watching the films, relax your eyes slightly and concentrate on the entire frame, allowing the shifts in focus and brightness to direct attention to different areas of the screen. Though the framing is stationary, the image is never static. As the focus undulates — almost like a breath — the subject matter morphs into unexpected shapes and surprising forms. (A shot that at first seems to be a starry sky changes to what appears to be a bird’s-eye view of a nighttime landscape, finally revealing itself to be of a sunny meadow seen through dark branches.) Images, refreshed by the aperture modulations, can dissolve into black or burst in a sudden flash of light, or throb calmly like a heartbeat. Together, they seem to invoke the genius loci or tutelary deity of the place or glade. 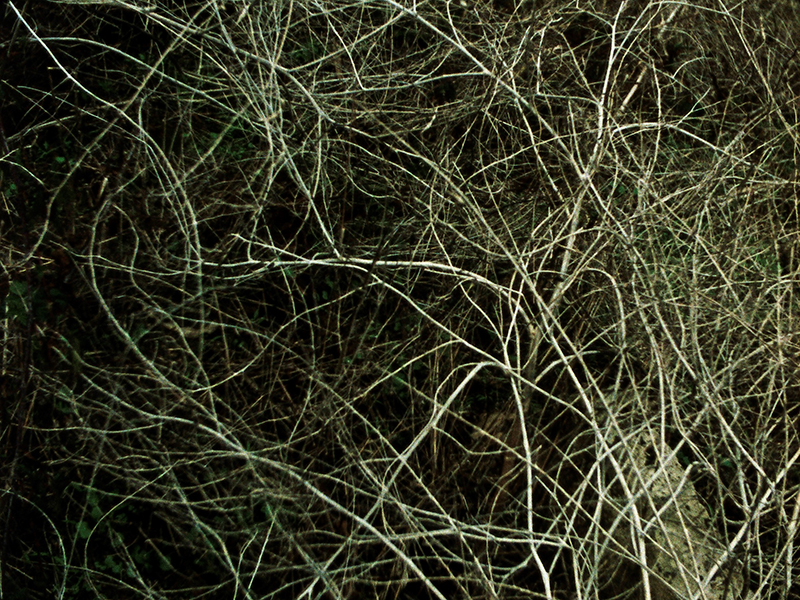 Working in a series allowed Dorsky to return to favorite locations, revisiting them as they changed over the year. Some, like Elohim’s wild currant trees, develop poignant characters and return often throughout the cycle. The haughty pink Astilbe blossoms (reminiscent of a receiving line at a Daughters of the American Revolution reception) in Coda, lose their pride along with their vibrancy in succeeding episodes. The camerawork is exploratory, never descriptive, searching out messy root systems and vegetative tangles that rival in complexity Nick’s images of the man-made world.

Nick’s in-law apartment, hidden away behind an anonymous Richmond District building, overlooks an untended backyard garden. His studio, reached by descending a steep staircase into a spacious basement, contains a spare sleeping place for guests, a work space, and a small storage area with a window looking out onto the garden. It is dark and welcoming, decorated with shots from favorite Balanchine ballets, stills from Ozu films and Tibetan textiles. Countless vials of sand from Alaya (1987) line the countertop by the window, where hangs a small piece of stained glass and several glass insulators from Dorsky’s collection.

Nick makes films by hand; no computerized editing software is in sight. The working area consists of an editing desk with a 16mm viewer, a splicer, and two sets of rewind reels. A foot-operated switch allows him to keep both hands free when turning work lights off or on. Directly behind is shelving and another work surface; underneath are several cannibalized 16mm Bell & Howell projectors used for spare parts. The current working model is on a stand to the right, facing a screen mounted on the wall at the base of the stairs. 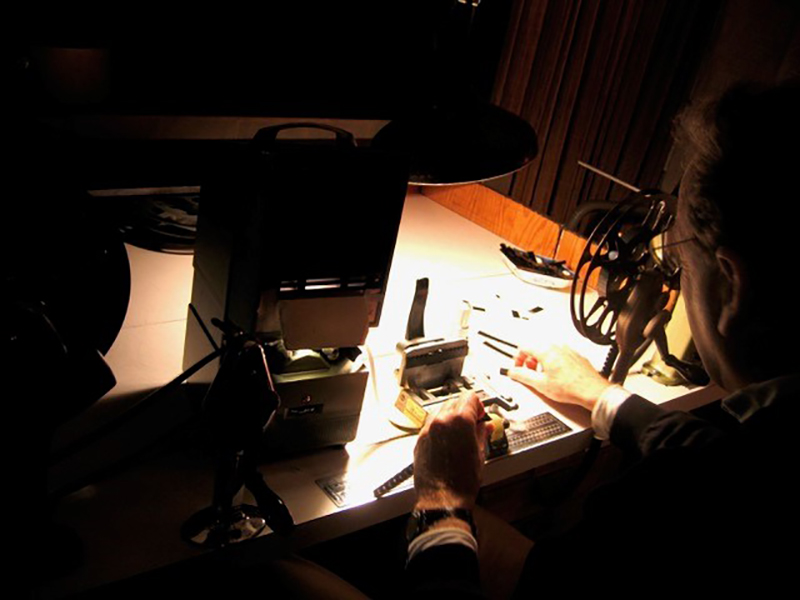 Seeing Nathaniel’s dexterity in crafting his films is akin to watching Chaplin’s fork-and-roll dance in The Gold Rush. His hands fly effortlessly between cranking the primary and take-up reels; intuiting the exact location of a promising sequence as much by touch as by sight; threading footage through the viewer; looping film around the splicer and peeling off old tape with his thumbnail; keeping track of film strips and snippets on the desktop; trying them out in new spots and, finally, anchoring them into place with tape on the front and rear on each splice.

I’ve visited his studio often over the past twenty years, watching him craft his films. Intrigued by the early shots of what became Elohim, I sensed a shift in his practice and he invited me to take a closer look at his process during weekly visits. We were both astonished when the cycle was completed with seven films. Nick would give me a call after a new batch of rolls was returned from the developer and he had made a first editing pass. After each screening, he would move to the editing table to cut troublesome footage, reorder it, or rescue a possible sequence from the outtake reel. By attrition, sketchy passages seemed to bloom and take shape, with the resulting film remaining pretty much in the order it was shot in. On subsequent visits, he radically reassembled the sequences and a glimmer of the final work would emerge. By then, he usually had an idea for the opening and closing shots. The rest was endless tinkering. This could take several weeks (Coda was the most problematic) or happen over a weekend (Abaton). Dorsky treats each clip like an actor, giving it every chance to shine, but ruthless when it refuses to work. I once heard him admonish a shot as he added it to the outtake reel: You are banished to the back forty! 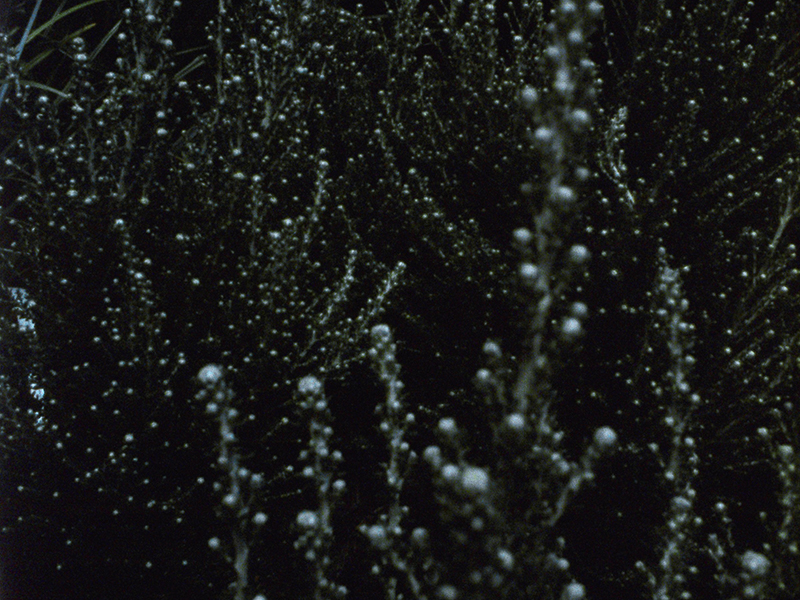 The magic of the films in the Arboretum Cycle is ineffable and one soon forgets their formal strictures. Why are the images so haunting, so touching? Why care about plants at all? Can it be that seeing Nathaniel Dorsky’s illumination of this seasonal cycle reminds us of what we share with all living things?