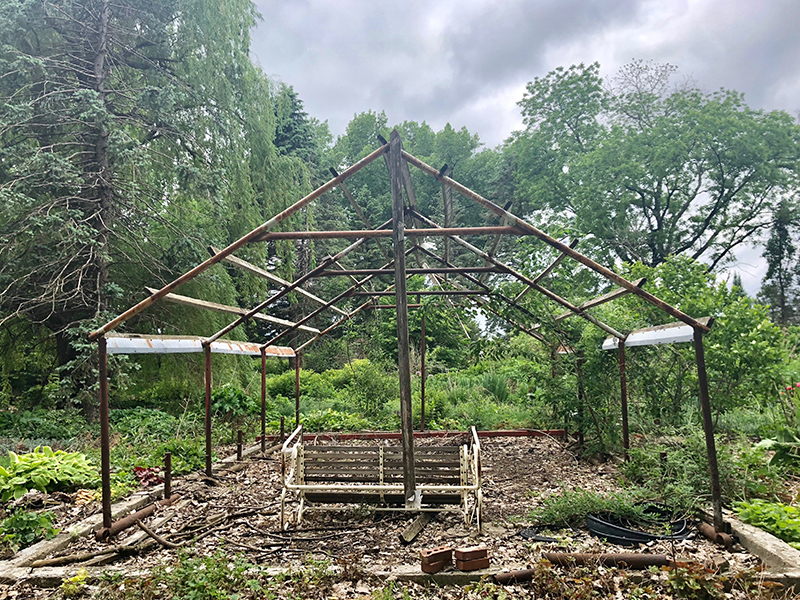 Ivalea is the name of my grandmother who passed two years ago. She has twelve children, who she tended by selling annuals and perennials out of small greenhouses built some four decades ago on the family farm. This summer the greenhouses will disappear — flowers will go back to nature, their predominant motifs growing beyond our family’s lineage — and I find myself preoccupied with a sense of emerging from narrative.

In the Japanese folktale “The Stonecutter,” the privileged signifier spends a lifetime asking a mountain spirit to magically elevate him along greater social, economic, and spiritual hierarchies. A stonecutter; rich man; king; sun; cloud; mountain; a stonecutter. But what of the wife who walked by his side 1 in consort with the transmogrifying composite of man, object, and nature? Her experience is tantalizingly without narrative.

Free to actualize outside the fixed framework of the folktale’s hero, she drifts through desire lines of the unknown. This place (the totality of elsewhere that is concealed, and therefore unknowable) past the darkness you see when looking toward the woods from the porch or beyond the perceived or intended meaning of story or song. This unknown is often called nature, who’s general concept is easier to categorize, and therefore reason with, than considering a mysterious shimmer infused with the material, memory, and slithering form of multi-species composites. Becoming-animal, becoming-woman, becoming-molecular. 2 A place spooling and unspooling in phase space 3 forever outside the framework of human-centered narrative.

On the farm, we walk through cottonwood groves and pick the few remaining shoots of asparagus before they go to seed. I prefer the plant when it has grown beyond intended use, stocks too limber for eating, their wispy fronds wagging chest-high in the wind. Greenhouse frames increasingly resemble skeletal remains of bygone deities and beasts; their allure incensed by life quickly taking root among their wooden ribs. I am compelled by this notion of shucking off anthropoid semblance to become crooked wooden jutes and veins of lenten rose, aromatic aster, and butterfly weed that make up the structures’ base.

I lie in a meadow and when I return some hours later the imprint of my body is still ecstatically ameliorating itself among the shoots and fronds. Perhaps I am both then and there stemming as rhizomes amid the sweet-song of chickadees and warring blue jays.

Driving along the Mississippi, I listen to Björk’s’ iconic “Hyperballad,” one of those rare songs that seems to perfectly describe both the rapturous agglomeration of new love and the utter rending of heartbreak. In the moment, “Hyperballad” is not (just) a love song, but a detailed account of the plight of the stonecutter’s wife.

Every morning I walk towards the edge
And throw little things off
Like car parts, bottles and cutlery
Or whatever I find lying around […]

In this story, Björk daily encounters the allure of an elsewhere beyond linear tropes of romance, security, and narrative. She is compelled toward an exultant seeming among and between objects — of semes freed from intended meaning as they collide, transfix, and speciate into new ontologies — so much so she considers joining the daily aesthetic detritus plummeting into the unknown.

In “The Gate” from her most recent album, Utopia, Björk completes the project of “Hyperballad” as she enmeshes with natures beyond Euclidean narrative. Having thrown herself out from the mountain top, she prisms, pathways, fragments, gates: she is become.  I do not want to be a person. I want to be unbearable. Lover to lover, the greenness of love. 4

Woefully unprepared to account for emergent speciation through and beyond narrative, S. Thompson’s Motif-Index of Folk-Literature depicts only the first instances of becoming.

Transformation: human to object is perhaps the most concise description of what happens to our bodies when we die. Yet this categorization establishes histories of narrative elements unfit for a becoming we see everywhere around us. There is so much more when bodies become other matter. I walk through the warm, flexing air of the greenhouses, hands courting red salvias, touching the edge of elsewhere, on the other side of which I imagine Ivalea dancing.

Whereas transformation assumes a death of the prior form, dance feels more fitting, both biologically and poetically, as a way to describe a fluid, permeating state of becoming. Death, in this sense, is a dance of matter. Take for instance the collaborative soundtrack album by Anohni and J. Ralph 5 or the improvisation practice in Rashaun Mitchell and Silas Riener’s DESIRE LINES, where I was first introduced to the idea of desire lines.

This writing originated in notes on Swimming Pool, a performance by Abby Crain, Layton Lachman, and Mara Poliak. In the work, three artists leapt through air as deer, legs wracked in momentum space unknown to human bodies

the first slipped through the audience, hooves clopping wetly on the marley until suddenly anatomy burst into a pile of woodchips, the aftermath hailing down like an obdurate giggle

the second fell to the ground; hair, teeth, and viscera coiling cleanly into a knotted string, which then slid up the wall. there it meticulously pursued imago via elegantly developing a tubular proboscis and assuming wings all of which budded from a single epidermal cell 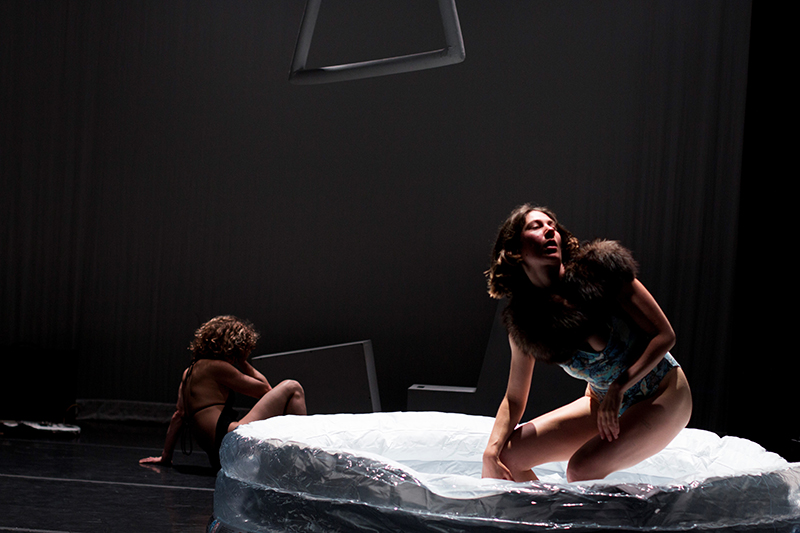 Ursula K. Le Guin establishes a compelling account of where my grandmother and her flowers have gone in her essay, “A Non-Euclidean View of California as a Cold Place to Be”:

Perhaps the utopist should heed this unsettling news at last. Perhaps the utopist would do well to lose the plan, throw away the map, get off the motorcycle, put on a very strange-looking hat, bark sharply three times, and trot off looking thin, yellow, and dingy across the desert and up into the digger pines.

I imagine the stonecutter’s wife setting into his skin, hewing bedrock away, ululating hyperballads as she tosses narrative nodes like pebbles into the mouths of river spirits. Motif, progress, and identity are gobbled up by the elsewhere into which she submerges after the stonecutter has vanished.

As one passes through flowers, emerges from folklore and narrative, or dances through an improvisatory collage of making and unmaking, the act of writing these artists becomes a desire line. Already the writing a strange, provisional loop seeking more subversive, heterarchical relationships with the matter it touches and is touched by.

I am unsure whether I am a greenhouse, a ballad, or a flower, but am altogether overwhelmed by becoming desire lines — that I am not going across a desert to find utopia among the trees, but am rather coalescing thin, yellow, and dingy, myself the digger pines with Ivalea.