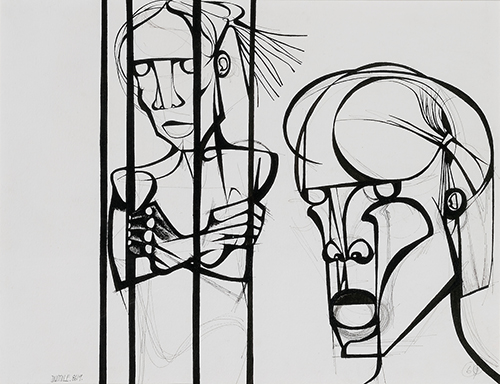 With each return to The Mundane Afrofuturist Manifesto, I reconsider the “bonfire of the Stupidities” Martine Syms proposes. Syms holds the notion of interstellar travel to task, limiting this particular Stupidity “within the solar system.” To reach further would be too time consuming, even as she and her co-conspirators in the Black imagination interrogate the category of time itself.

Moor Mother is a poet and truth-teller who resists such categorization. One half of the Black Quantum Futurism collective (along with Rasheedah Phillips), her experimental music project traverses the atmospheric weight of 2016’s Fetish Bones to The Motionless Present’s woozy meanderings. Moor Mother describes her own work as everything from “project housing bop” to “slave-ship punk.” In a recent interview, she bristled at being called an activist (Just because you give a fuck about something don’t mean you’re an activist). Political poetry is another insufficient label. I would define her as someone who has beef with time. The best thinkers always do.

Earlier this year, I attended a Moor Mother concert. This is not a belated review but rather an attempt to understand what happened in that dark room, at least to me. While writing this, I am looking at the video recordings I took that night. They are grainy and bathed in red. Moor Mother’s lyrics are an alternative backdrop but a no less weeping one. Like how momma made biscuits outta nothing all while having a dope needle in her arm. A saxophone screeches mid-way. There is a roll call of names, oceans, places, histories. Months on, I remain devotedly committed to interiority, to the intramural, to inside voices and the stickiness of insides. Yet, somehow, I still flinched when presented with it in the form of Moor Mother’s bifurcated poetics. Soft. Hard. Yielding. Difficult. The journey from one pole to another and those invited along the way.

To Moor Mother, “poetry is a form of time travel.” She belongs to, and deeply admires, the tradition of poets like Sonia Sanchez. Every journey begs a set of questions; Where are we going? Who is coming with us? Moor Mother laments the “short cuts we take to understanding.” Syms tethers us to our own world/s.

Which way do we go and what is lost on the way there?

Fetish Bones opens with Creation Myth’s time-traveling narrator. A seam is opened into the portal of time, from 1866 and 1919 to modern-day Ferguson. Then, a list of names. Those who didn’t make it back with the time traveler. The Aishas, Charnels, Charices, and Sandras. Consider M. NourbeSe Philip’s invitation to “simultaneously tell and un-tell.” This is the pure utterance invoked in both She Tries Her Tongue, Her Silence Softly Breaks and Moor Mother’s entangled temporalities. This is the break and the softness it renders. This is what held me that night.

In a Grave is another example of Moor Mother’s scuffles with linearity. Denzel Curry (who has taken a mental health-related hiatus from rap) looms over the track while Moor Mother traces the lineage of chthonic figures from the “belly of Hades” to Reagan. A deathly travelogue of sorts. We glide from toaster and biscuit to hearse, an economy of images that unwinds the spool of the beat. This is The Motionless Present, where historical reverberations are felt in the everyday, in the mundane. Submerged in poetry, fragmented soundscapes, gospel samples, and electronic loops, Moor Mother utilizes the fullness of absence as art. Weightlessness. Placelessness. Timelessness. Not having is not the same as not being. We learn this difference to save our lives.

We are here, nameless, staring at ourselves, the South African poet Arthur Nortje once wrote. The Population Registration Act of 1950 forced Nortje, along with other South African writers such as Dennis Brutus and Can Themba, to seek refuge in England. “Cosmos in London” was a poem written during this period of exile. Nortje went to the very marrow of dislocation as both a theme and a condition. My going hence to earn more purpose than this narrow world affords its children. In “Teacher’s Final,” return is presented as an inevitability. You can return, but never to the same place. Sometimes, you don’t even return in the same state at all. A few days before his twenty-eighth birthday, Nortje was found dead from an overdose of barbiturates. There are many kinds of leaving.

Nortje’s poems speak to a cellular melancholy that is both familiar and terrifying to so many of us. It’s what I experienced with Moor Mother. Trapped in the nomenclature of South African racial classifications, Nortje’s exile was of the kind that is so cruelly described as “self-imposed.” Unlike many of the Soweto poets, he did not stay. They, unlike him, did not win scholarships to Oxford University. What he left behind, however, was carried with him. In 1979, an ANC-affiliated anthology of exile poets (Poets to the People) was declared “undesirable” by the South African government. Despite his passing nine years earlier, Nortje was identified by the censors under the 1974 Publications Act as one of the banned poets. This calls to mind the uMkhonto we Sizwe commander and trade union leader Looksmart Ngudle’s 1963 death in detention. A subsequent banning order made Ngudle the first person to be banned after his death.

Enforced non-linearity ruptures social bonds and breaks apart lineages of community and cultural production. Apartheid scattered peoples. It did the same to their poetry. Nortje’s dissident poetics spoke to the adhesiveness of this grief. Those who leave are riddled with the evidence of those left behind. Nortje’s early poems were being published in the midst of the Sharpeville massacre, the banning of the Pan Africanist Congress and the African National Congress as well as the arrests of uMkhonto we Sizwe leaders. Nortje’s own circumstances may not have been as punishing but they were intolerable. Not even a traditional Anglo-American education, Coloured/Kleurling ambiguity, and a prestigious scholarship could lessen his disembodied yearning.

Nortje’s Oxford journals are scattered with these contradictions; drinking games, lost friends, the Black mother that moored him to the continent (the “maternal muscle”), the destruction of Coloured areas by the Verwoerd government, the asymmetrical power dynamics between Black and Coloured communities and his longing for even the “oil-scummed green sea” of the Eastern Cape.

Voluntarily leaving the township/hood/block can feel like being spun out of orbit. We often call this by its other name: success. Making it is always quantified in terms of leaving behind the peoples and places who have made us. This is a kind of time travel that leaves one version of ourselves, the original template, behind. This is the version we can spend the rest of our lives pretending to still be. Often, we are rewarded for these affectations. They constitute our painstakingly cultivated authenticity. Then there is the longing for those left behind even as we transcend the conditions we once sought to escape. Navel-gazing always implies looking down on something. It can also be a looking into the gut. In either case, what is ennui to the exiled?

Was standin’ on this mezzanine in Paris, France / Finna spaz cause most my homies never finna get this chance. Vince Staples in 2015’s “Lift Me Up.” The agonizing calculation that pits where we want to go against where we have come from. This is the kind of time travel I want to resist. Staples employs the metaphor of the goldfish and the crab in the bucket in the same way Soweto poets used the motif of the hurtling train transporting workers from the townships to the big cities. Train carriages or fishbowls, we are always taunted with the promise of freedom. Crab mentality is fostered by the unnatural habitat of the bucket. Somewhere along the journey, our metaphors lose their potency. Get mixed up. Nobody wants to hear the self-flagellation of the talented tenth.

I didn’t feel connected to hip hop growing up. I never wanted a chain or a mansion. I just wanted niggas to stop dying. Staples harks back to a time when intentions were clearer. His poetics is half survivor’s guilt, half warning. Throughout it all runs an undercurrent of irreverent unease. I love a Vince Staples interview for these reasons especially. His responses come with an air that can only be described as: my body (and the money it generates) may be here but my loyalties aren’t. Long Beach’s reluctant time traveler. The One Who Got Away Only To Come Back.

Non-linearity can be a site of both destruction and regeneration. The breaks away and from our communities can be torturous to endure. But the time traveler doesn’t have to be a lone observer. Moor Mother’s poetics attest to this. Non-linearity is time travel’s virtue. It is one way of dismantling the Master’s Clock, as the Black Quantum Futurists say. In Nortje’s words, it is the “soft, debauched flesh of living.” Staples and his disinterest in furthering hood-made-good narratives is another such way. What is often interpreted as aloofness might be his way of not putting his heart into an industry that would chew it up and spit it out. Investing that energy and time into our own present/s and their possibilities seems to be the livable choice. I am grateful for the lessons of time travelers who are dedicated only to communal movement against the currents of time. They are guided with the intentionality of the streets that birthed them. The inheritances they wield. Their fellow travelers.