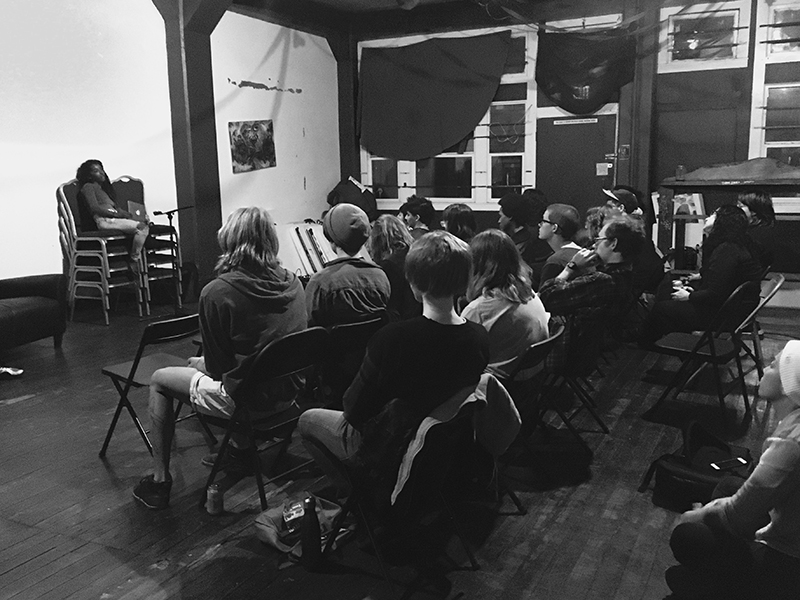 Van Dellz performing at Qilombo as part of the Cantíl reading series, October 2016.

When was Cantíl founded, and why?

Claire Grossman: Cantíl was founded in 2015 by Elana Chavez and Tatiana Luboviski-Acosta. They met after a reading at Scott Nanos’ Books for Days, which was then called Temporary Bookstore at Rise Above, a print shop on 48th and Telegraph.

Elana Chavez: Tatiana and I were both painfully aware of the lack of non-white poets organizing events and/or being invited to share their work, and felt it absolutely necessary to create an intentional space for non-white poets and audience members.

Who is your audience, who are you trying to serve and who do you hope to reach?

EC: Our audience is those who can imagine poetry as a way to speak truth to power. We wish to make a place for people to experience poetry, as Césaire said, as a “replenishing knowledge.”

CG: Like our friends at Mess Editions, who describe their collective intent as publishing poets “outside the ivory tower with fire in [their] hearts,” our series pits itself against poetry’s mainly-white room with the hope of abolishing the structural and institutional processes that make it so. We know that race isn’t the only vector of oppression, and so are also thinking about how to make a space for people who don’t usually benefit from the institutions that scaffold poetry.

As a “Bay Area reading series,” do you aim to host readers and performers specifically from this region, or also nationally/globally? In either case, could you talk about how you relate to place and geography through the series?

We like to host both out-of-town readers and local poets. If we hear that someone is coming through town, we’ll reach out and say “hey, we have this series, come read with our friends.” Often we’ll have a visiting poet who is being flown in and paid to read at a big institution. Many of them are happy to do an East Bay reading in a space that feels less formal.

Speaking of place, has the acceleration of gentrification in Oakland over the last few years imbued a new or different sort of political urgency to the work you do in seeking to build and hold intersectional space?

The acceleration of gentrification in Oakland threatens the existence of community spaces that seek to help the most disenfranchised among us. We understand that increased evictions and policing are not unrelated to the formation of poetry as a very white and higher-ed-affiliated space, which is to say a space that is not by default accessible to everyone.

The bookstore at 48th and Telegraph where we had our first reading has been demolished and is now an apartment building (accompanied by a half-dozen condos under construction, as well as a BoxPark style mini-mall). For a while we were hosting readings at Qilombo, a community center at San Pablo and Grand. Qilombo’s mission is to provide for Black and brown and low income or houseless people by cooking free meals, by maintaining a garden (that is constantly under threat by the landlord, despite a written agreement) and library and free store open to anyone, by offering classes and workshops focused on healing and wellness, and by simply providing a place to sit and rest. After Ghost Ship, when the fire marshal became a tool for landlords to remove people from their spaces, Qilombo almost didn’t make it. The greater community came together and provided the materials and labor necessary to get the Q up to fire code, enabling it to avoid eviction.

Places that desire a world without cops — without capitalism! — are the most vulnerable in this climate and, in our opinion, the most necessary.

How does a POC poetry reading series fit into this? We know that cultural production (including art with “good politics”) can and does play a role in making gentrification more palatable. We think about the BHAAAD statement in which they write: “Queerness is an inadequate category when used to imply a liberatory politic / It is often used in ways which erase racial and class violences.” Race can also be an inadequate category in this way, erasing other violences. We keep this at the front of our conversations, and throw our support behind those who think and organize along these lines. The poetry doesn’t need to come first. If the reading is a place where someone can sit and eat and rest, or if we can pass our tip jar cash to a community elder who does gardening work at Qilombo, that is enough. 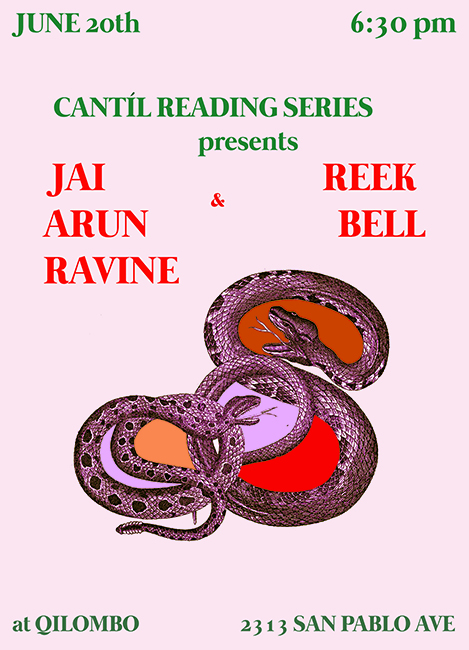 How is Cantíl structured? How many people work as part of the organization? Staff or volunteers or both — or some other configuration?

It’s just the two of us.

Are there any readings that strike you as particularly memorable or emblematic of what Cantíl does?

EC: During our first reading, Tatiana [Luboviski-Acosta] asked that white folks at the front of the room give up their seats to non-white audience members. It was a POC-focused reading, after all. I remember this because it was such a direct request to make space for non-white people.

Are you in dialogue with other POC-specific reading series elsewhere in the US? And are there any historical precedents (from the poetry world or beyond) that inspired the series?

We admire the work of Words of Resistance (a reading series), Maji Press (a community newspaper), Van Dellz’s Decolonizing Creative Writing class, and small presses like Brown Recluse and Thick Thigh Collective. Historically — locally — we admire the Women’s Press Collective, who put out much of Pat Parker and Judy Grahn’s work in the ’70s. (Their spot on Broadway is now a real estate office across from CCA.) And we admire groups that did poetry or art as a part of something else: Teatro Campesino on the picket lines; On Guard for Freedom, a collective in the ’60s that eventually became Umbra.

Can you tell us a little about your individual practices, and how they interface (or don’t!) with Cantíl?

EC: My own poetry is inherently in dialogue with the work of those we invite to read because we are both writing in the wake of the destruction of homes, families, lives, and bodies. The body and the life of the Earth itself. We are both also writing towards a place of renewal, of perennial life shooting from hacked stumps.

CG: I’ve been writing (with Stephanie Young and Juliana Spahr) about prestige literature’s relationship to race through the twentieth century up through today. The work of putting Cantíl together is related to what we’re trying to think through — who gets to write, who gets institutional support, and why.

What else should we be asking you?

Ask what we’re excited to be reading right now! Reek Bell’s A Great Act, printed by Floss Editions; the Combahee River Collective reader edited by Keeanga-Yamahtta Taylor; Julian Talamantez Brolaski’s Krupskaya chapbook; and Raquel Salas-Rivera’s The Terciary, published by Timeless, Infinite Light. And we’re excited for books coming out very soon: Andrea Abi-Karam’s EXTRATRANSMISSION and Jasmine Gibson’s Don’t Let Them See Me Like This. And the Pat Parker/Audre Lorde correspondence that came out earlier this year, especially Lorde’s warning to Parker about reading in institutions: “…get in there, give the kids what you can (and from you that’s a lot) make a lot of bread, which is possible if you play it right, but don’t stay around too long. AND DON’T TRUST ANYONE IN IT […] Use it, and then get out.”