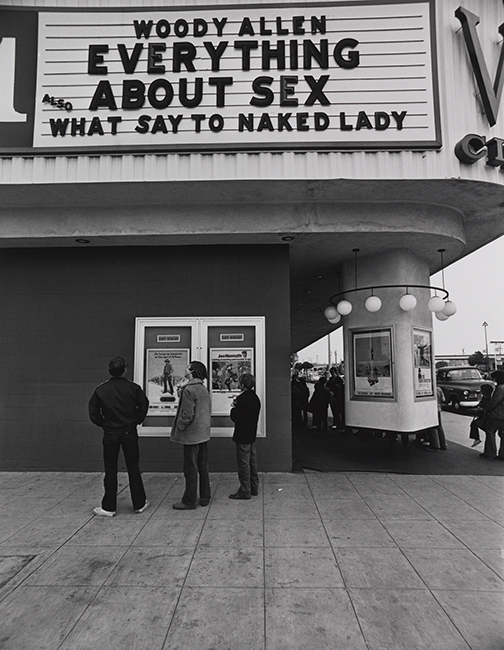 What does it mean for ostensible feminists or otherwise socially progressive people to praise Woody Allen’s capacity for writing female characters? Whether it’s Kate Winslet claiming that he’s “on some level […] a woman,” or Diane Keaton insisting that she “continue[s] to believe him,” one is left wondering what affinity this strikes between particularly classed white women and male dominating powers that be.

Woody Allen’s carefully constructed masculine expression was first cultivated during his time as a standup comedian. His onstage character embodied a nebbishy neuroticism, one that might arouse comparison to white womanhood per characterizations of this archetypal/stereotypical Jewish manhood as being a feminized one; he projected a persona of docility and non-aggression. His comedy shtick was his uneasiness and discomfort, which were then transposed onto his film characters, and into our perception of real life: Annie Hall’s (1977) protagonist, Alvy Singer, whose inner monologue guides the entire film, has long been emblematic of Woody Allen himself.

Orson Welles described Allen as presenting a “particular combination of arrogance and timidity [that] sets [his] teeth on edge,” and that “anybody who speaks quietly and shrivels up in company is unbelievably arrogant.” What is arrogant, and so quintessentially white, about this kind of quietude?

Timidity is a classically feminine trait. It signifies “proper” performance of ladyhood not so immediately (but still ultimately) accessible, a demureness seen and heard only when beckoned. Shyness and timidity are the domain of white women, real women, the only women universally capable of innocence and whose virtue is protected and enforced/reinforced as the race-gendered fulcrum around which the villainizing of Black and brown men (and by extension, the carceral economy) revolves. White womanhood is constructed as the fair, fragile state of being, white women as the particularly delicate creatures that demand a patriarchal care and protection. In their innocence, they are incapable of being aggressors.

The self-deprecating and unassertive nature of a personality like Woody Allen’s obfuscates a capacity for violent or predatory behavior. Despite glaring pathologies describing the predictable nature of mass shootings in America, young, white male shooters — sometimes described as “timid” but very often as “quiet” or “withdrawn” — are often framed in the media as being compelled by “troubled childhoods” and other social refusals (like those by unappreciative young women) rather than their desire for violence or connections with malignant social groups. Submissive plantation wives, too, have been absolved of the physical, psychological, and sexual violence they visited upon their enslaved human property because they were also victims of slaveocratic patriarchies. This claim, made in Catherine Clinton’s 1982 classic The Plantation Mistress: Woman’s World in the Old South, asserts that white mistresses endured comparable bondage to their property because of their own social isolation. The existence of Women of the Ku Klux Klan, an all-female counterpart to the Ku Klux Klan founded in the 1860s, contradicts the idea that white women were helplessly swept along in racist male fervor. Timidity presents as sub-hegemonic through a veneer of non-dominance and gendered ineffectuality; this superficial performance belies the most efficient functions of power and the machinations of those whom it serves.

None of this, of course, is to intimate a universal illegitimacy of shyness or timidity. But performances of personality must be assessed in juxtaposition with the systems navigated by those performing them and how these systems permit or punish certain behavior. Louis C.K.’s standup routines were sprinkled with brazen jokes about masturbation and self-exposure for over a decade before allegations of sexual harassment were confirmed: people can be straightforwardly similar to their public/artistic self-characterizations (which then begs another question of how we interpret what could ostensibly be admissions of guilt and overlook predators hiding in plain sight). Despite his crassness, Louis C.K.’s comedy persona was complicated by a projection of his feminist sensibilities. Crafty curations of timidity by white men can nurture a simultaneous psyche of aggression and victimization, and a confidence in the near-infallibility of their whiteness and their manhood engenders a dangerous arrogance within it.

We have difficulty holding celebrities responsible for the harm they cause for any number of reasons. There is some collusion plotting their downfall, or there are the aforementioned scripts of incapability. There is a way that defense of another becomes a defense of oneself because someone’s guilt and wrongdoing mirror one’s own, and one could not fathom one’s own behavior as constituting a violence. When men, for example, run through hypothetical scenarios of what kind of sexual behavior constitutes assault in the wake of some scandal or set of allegations, it seems far more like a self-evaluation of past behavior than any real concern for women’s boundaries. Celebrity status carries a cultural capital that begets deification. That cultural capital affords individuals a kind of indispensability that far outweighs institutional willingness to hold them accountable for their offenses or social desires for justice. Even after Bill Cosby’s recent conviction (he was found guilty of just three cases of aggravated indecent assault amid accusations from at least sixty women) and after he admitted to drugging multiple women with the intention of having sex with them (or, rather, raping them as an un- or barely conscious person cannot consent), many people, both celebrity supporters and non-celebrities alike, still contend his innocence. There has clearly been a conflation of America’s beloved Cliff Huxtable and Bill Cosby — a deification of a real-life comedian by way of an iconic fictional personality. (Also lurking is the convenient conspiracy of the ever-present white supremacist plot to bring down a successful Black man, not unlike R. Kelly’s management characterizing the Time’s Up #MuteRKelly campaign as an “attempted public lynching,” which socially exonerates someone like Cosby even if — and especially because — a court has ruled otherwise.)

Woody Allen’s cinematic harmlessness has similarly manufactured a false familiarity that tends to accompany celebrity fandoms and cults of personality (with a particular leniency and character infallibility given, of course, to white men). As a filmmaker who often stars in his work, he earnestly presents and overshares himself on-screen, which allows us to claim to know his character off-screen. Where Harvey Weinstein is a walking, talking caricature of a casting couch pervert, Allen is the subtly creepy uncle who never fails to tell you “how big you’re getting.” Familial recognition of those uncomfortably long hugs, lingering pats on your lower back, and too frequent remarks about your increasingly visible pubescent development would require a willingness to alienate: for your mother to believe you and to tell the family matriarch that her son is a pedophile.

The aiding and abetting of Weinstein’s serially abusive ways underlines how institutional harboring of abusers is central to any machinations of power and domination. And Allen’s continued success in Hollywood underscores the persistent belief in our society that consumptions and appreciations of artistic production should transcend moral bounds and be evaluated purely based on aesthetic qualities (as though the two can ever fully be divorced from one another).

Hollywood’s reckoning with Allen should (and would, I think) necessarily transcend a schism between solidarity with Dylan Farrow and the protection of her father, the consummate artiste.

While Hollywood is at least willing enough to superficially shun the likes of James Franco or Aziz Ansari (perhaps because of their relative newness in the industry, and also because they are not regarded as artists in the same way Allen and Polanski are) or even Kevin Spacey (because his confirmation of sexually soliciting a then-fourteen-year-old Anthony Rapp and subsequently coming out as gay also triggered a moral panic around Hollywood pedophilia, a phenomenon that dominant cultural norms frequently bind up in queerness and homophobia) for their sexual transgressions, its ranks have been slow in shutting out Allen. This reckoning would demand interrogation of the production of what we deem to be “art” and the elevation and protection of individuals whose work we privilege as canonical. Perhaps if we did not hold that artists’ work should be evaluated separately from their personal lives and politics, dialogues and plot lines in his movies might be more retrospectively questionable. Manhattan (1979), a film widely praised as one of his greatest, has Woody Allen playing a forty-something man romantically entangled with a seventeen-year-old high school student, played by a teenage Mariel Hemingway. She later wrote in her 2015 memoir that Woody Allen’s attentions did not cease after the filming and that he attempted to coax her to Paris on something of a lovers’ vacation two years after Manhattan had wrapped. Separately, actress Stacey Nelkin claimed the film’s intergenerational love story was based on the real life romantic relationship that she had with him when she was seventeen — Woody Allen has acknowledged their relationship but disputes that she was underage at the time of their involvement.

The reckoning would, perhaps, compel questioning of sexualized and gendered themes and plot devices, and would invite even larger conversation of Hollywood’s complicity in super-structures of domination; this, instead of only discussions about women in filmmaking and celebration-disrupting callouts of all-male category nominations at awards shows. Art invariably reflects life, and art should necessarily be assessed as knowledge production and aesthetic articulations that are informed by politics and structural investments.

The resolution of Hollywood’s sexual violence problem does not simply rely upon unequivocal denunciation of Woody Allen. It is, at best, misguided to believe public excoriation would suddenly dismantle the industry’s not-so-secret harboring of pedophiles and abusers. But a confrontation of Woody Allen’s legacy would symbolize a reckoning with and laying bare of the social function of performances of timidity. These confrontations could in turn illuminate the matrix of raced and gendered domination that allow Hollywood to weaponize identity and personality in a way that allows individuals to be both complicit in and beneficiaries of racial capitalism.