< Issue – 9 : Competing Realities, Contested Corners
Competing Realities, Contested Corners
Issue – 9
Edited by Claudia La Rocco + Gordon Faylor
Oakland could once be divided into the moneyed hills and the disinvested flatlands. Now wealth and poverty intermingle, drawing nearer in proximity as the chasm between them widens. All space is contested; songs and murals parse race and class as they cling to blocks and walls, vying for visibility. The tension erupts in the streets, and it simmers at the intersection of culture, city policy, and real estate. How many realities fit within city limits? Every corner is a test. 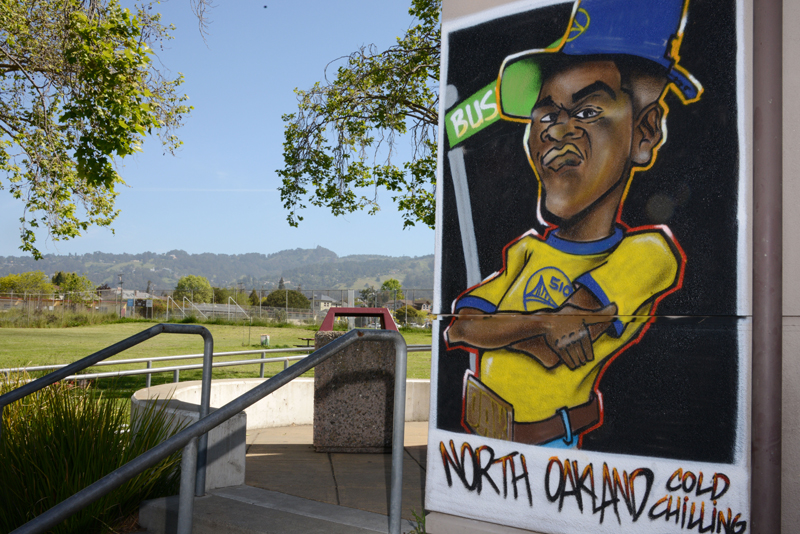 I got the North, got the East, got the West with me…

The early 2010s saw a surge of vital hip-hop emerge from the streets of North Oakland. Blast Holiday rapped with an air of head-nodding stoicism, voluble but smooth. He often guested on songs by the more trenchant HD of Bearfaced. Both gravitated toward swaggering, mid-tempo beats with soulful interpolations, and their joint songs, such as “Buck Fifty,” are spitfire exchanges of clever boasts and whimsy-tempered menace. They also shared a defiant, colorful regionalism: North Oakland, in their lexicon, was “North Pole” or “Ice City,” and they were its indigenous “polar bears,” standing sentry around the perimeter of Bushrod Park. On “Compartible,” from 2011, HD raps, “Sold out a thousand the first day local,” as if the relatively modest feat was all he ever wanted.

But their creative peak coincided with an aggressive police crackdown. “Terms used in reference to the North Side Oakland gang are ‘NSO, ‘Polar Bear,’ ‘North Pole,’ ‘Pole Boys,’ [and] ‘Ice City,’” wrote an Oakland police officer in 2010 in support of establishing a “gang injunction,” a court order restricting the behavior of individuals who meet broad criteria of gang membership. In the same court document, the officer described conducting a “parole search” of someone walking down the street. “[He] stated that he has the ‘North Pole’ tattoo because that is where he is from. Based on my training and experience, I understand this as an admission that he is a member of the NSO gang.”

The “safety zone” of the North Oakland gang injunction spanned some hundred blocks, including practically every street corner referenced in a song or video by HD and Blast. Even before the injunction, Blast’s arrest record — a compounding series of parole-stops-turned-chases and weapons and drug possession charges — suggests a years-long police effort to expel him from North Oakland. His lyrics sometimes referenced the arbitrariness of gang-based policing, which was long been criticized as little more than sanctioned harassment. “Feds was lookin’ at all our photos / Claimin’ we a gang ’cus we wear the same thing,” Blast rapped on 2011’s stirring “Totin.” “So the fuck that make them?”

The injunction followed what police described in court documents and news reports at the time as a series of retribution killings between cliques on the Oakland-Berkeley border. But opponents pointed out that violent crime was actually more common in other parts of the city; what distinguished neighborhoods such as Bushrod and Gaskill from other violence-prone parts of Oakland at the time was their proximity to gentrified Temescal. Activists cast the injunction as an example of real-estate interests conscripting law enforcement to prepare the area northwest of Temescal for wealthier newcomers. 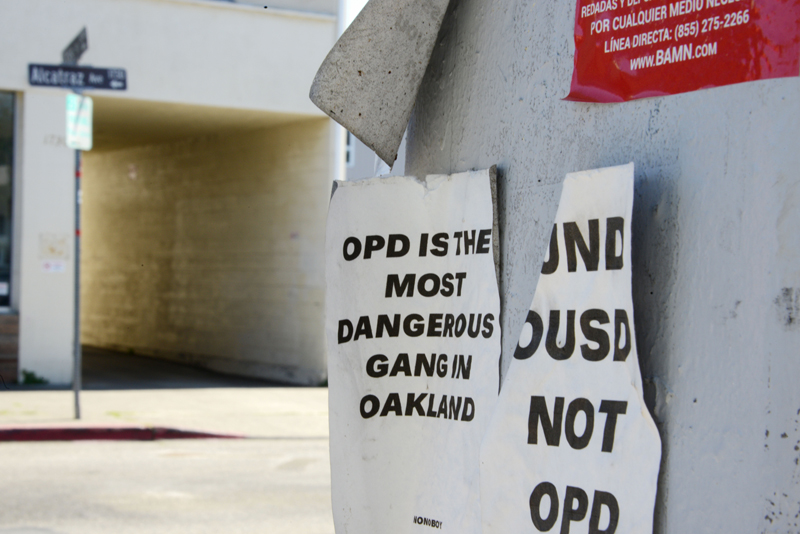 Hip-hop culture, with its emphasis on public presence, feels the effect of this phenomenon early on; its repression is a neighborhood-level barometer of demographic change. As competition for property intensified in North Oakland, it made sense that rappers such as Blast and HD of Bearfaced — who staked claim to the area, vocalizing their sense of ownership with the persuasive might of their wordplay and persistence — would be perceived as a threat: Street rap is often the frontline of a battle between real-estate capital and unpropertied, longtime residents of Oakland. In the North, realtors pushing “NOBE,” for North Oakland Berkeley Emeryville, shows who prevailed.

The gang injunction was suspended in 2015 amid concerns about civil liberties violations and doubts about its effect on crime. But by then it had effectively criminalized the lyrical themes — and, importantly for income, the brand — of a prideful group of locals. Its tenure also coincided with the beginning of Blast Holiday’s eleven-year manslaughter sentence. HD of Bearfaced’s recent, post-jail release Extortion Muzik 6 is his only album that sounds defeated. It’s elegiac, stalked by ghosts and written largely in the past tense. “What Happen 2 the World 2” goes, “Every hero I had / They tried to destroy ’em.”

Police declarations supporting the North Oakland gang injunction repeatedly emphasized the supposed hazards of young black men spending time outside in the area where they grew up, a pastime cast as “congregating in public and intimidating residents by their ‘show of numbers[.]’” Real estate developers and their political allies often desire artists’ cultural cachet as a gentrifying force — but street rap seems conspicuously exempt. 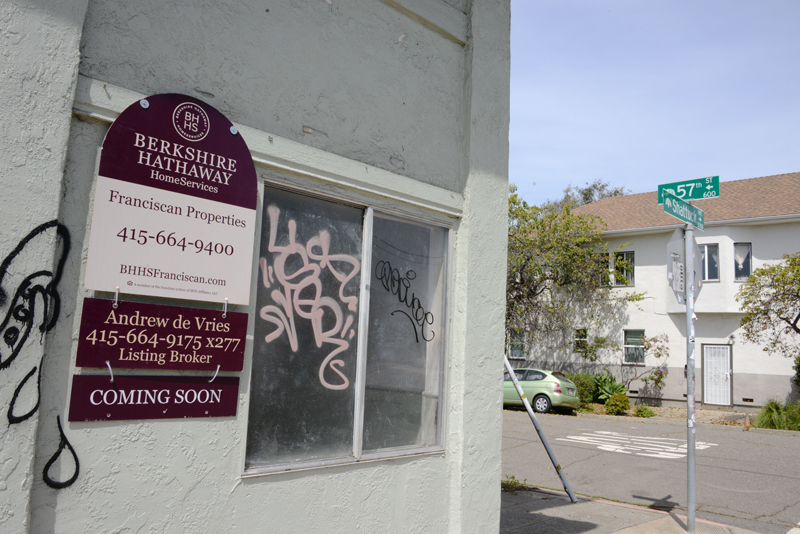 Tricia Rose, director of the Center for Study of Race and Ethnicity in America at Brown University, made a relevant point while analyzing venue resistance to rap in her 1994 book Black Noise: Rap Music and Black Culture in Contemporary America. “Because black youths are constructed as a permanent threat to social order, large public gatherings will always be viewed as dangerous events,” she wrote.

In Oakland, city-owned venues have imposed live rap moratoriums, hip-hop clubs have sued the police department over harassment, and some artists have had enough shows foiled by police to feel they’re blacklisted. But as emerging rappers’ emphasis on live performance has decreased — due to police repression as well as promotion moving online — antagonism between hip-hop and cops has become concentrated outside in the commons. And amid widespread real-estate speculation, it’s intensified. You can track the severity of displacement on a neighborhood level by the themes, or absence, of street rap.

Local hip-hop artists working in other disciplines also equate spending time outside, in and of itself, with drawing the ire of the police. The breakout video by Turf Feinz, who popularized the regional dance style known as turfing, begins with a police car stopping in front of the dancers, followed by an image of MacArthur Boulevard and 90th Avenue street-signs in East Oakland. It appeared months before Oscar Grant, an unarmed Black man, was killed by a BART cop on New Year’s Eve in 2009. Turf Feinz soon uploaded another video, “RIP Oscar Grant,” this one set on the Fruitvale BART platform where Grant lay on his stomach, hands restrained behind his back, while he was shot to death. 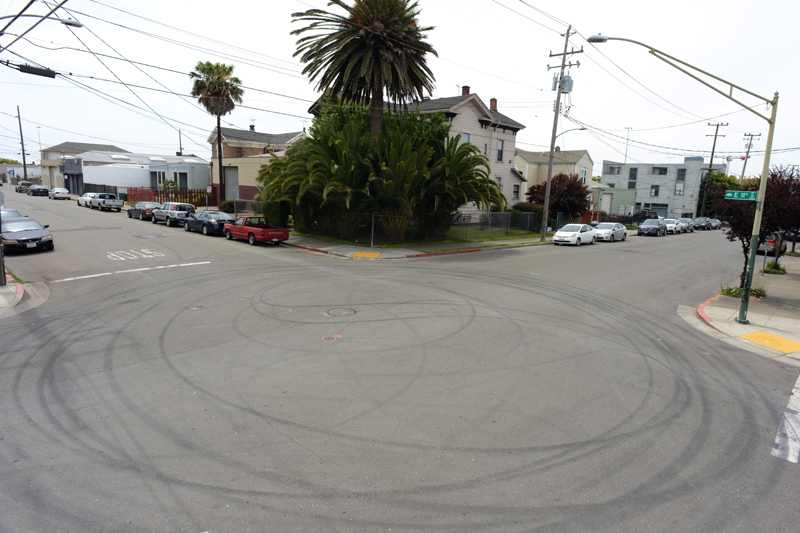 The kinetic energy of the car stunts known as sideshows — a local tradition that some say originates in the parking lot of hip-hop hangout Eastmont Mall in the late 1980s — is also about seizing the commons. They generally don’t center luxury vehicles: Richie Rich’s “Side Show,” from 1990, and Mistah F.A.B.’s verse on Traxamillion’s “Sideshow,” from 2006, both reference the participation of “buckets,” or lousy cars; sideshows are for everyone. Both songs also reference cops. The Oakland Police Department has lately used its usually sleepy Twitter account for an interesting deterrence campaign, noting that some vehicles impounded at sideshows are registered outside of Oakland. “Don’t come to Oakland to drive recklessly,” goes one post, coopting nativism rhetoric to argue that sideshows — most prevalent in the least gentrified parts of East Oakland — aren’t a part of local culture.

We’re conditioned to understand the hyper-localism of what’s often called “turf rap” as referencing informal economies, such as the drug trade. Why not take it more literally? Unstructured time in public, a hip-hop hallmark, exposes Black people to the state violence that increases amid gentrification. The rappers, dancers, and even motorists of local hip-hop culture — with their respective ritual devotions to what’s often called “the soil” — are emphatically articulating their will to remain, to resist displacement. Police backlash follows real estate capital’s will to invade, leaving many shell-shocked and estranged. As HD of Bearfaced deadpanned in 2016, “It used to be North Pole.” 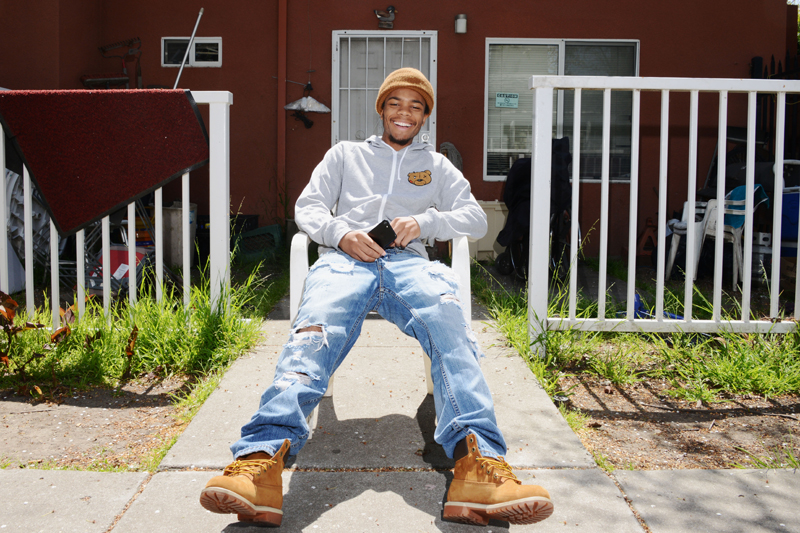 To Project Poppa, the Village is, at least for now, still the Village. That’s a nickname for Lockwood Gardens, the East Oakland public housing project where the rapper grew up. His music echoes the insistence on holding space that once animated HD’s lyrics about North Oakland. I recognized the location he chose for our interview last year, 65th Avenue and International Boulevard, from his self-directed music videos. Threaded with local news reports and jailhouse dispatches from elder neighborhood figures, his songs are history-minded. It’s a protective spirit, one grimly suited to his community’s precarious position: adjacent to real-estate development, and unlikely to reap the benefits.

“Stay in the House,” a song from Project Poppa’s 2017 album War Outside, might’ve been written by a Bushrod rapper circa 2009. It’s directed at a slightly younger version of himself: someone coming of age in a historically disinvested, heavily policed neighborhood abutting parts of Oakland lately deemed to contain desirable real estate. On one hand, the song warns a young person who’s considering crime: treachery lies ahead. On the other, it’s a reminder about the lesson of the North Oakland gang injunction: criminal activity isn’t the only thing that’ll turn someone like him into a “criminal” who’s subject to removal and worse; going outside is enough. “Stay in the house ’cus the cops outside,” Poppa raps. “Stay in the house if you ain’t ready to die.”