Notes on the Occasion; or, Gifts for Future Arrivals

A groundbreaking. A toast. An elegy. A talking bouquet. A dedication. An urn. 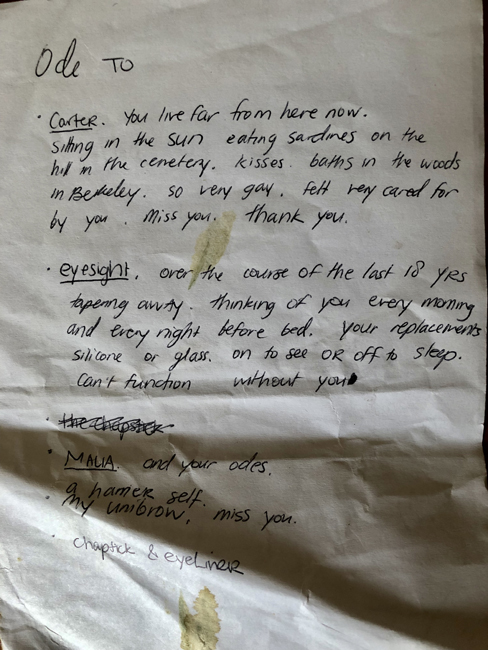 Such marks, when poetic, have the unfortunate status of occasional verse. Marginalized as “light poetry,” they often draw little attention within larger literary canons. As quaint, if not abandoned practices of ceremony, these forms both produce and emerge from the occasions they address. I find these gestures ripe for imagining how we might respond to the now of performance (and life) without the gross desire to capture it.

In my own work, I’ve been mining the occasional for small acts of dedication. I’m inspired by Allan Kaprow’s Piece for Coryl’s Birthday (1985), a handwritten activity score for the artist’s wife 1; Carolee Schneemann’s Gift Science (1964), an assemblage of personal offerings from Arman, Erró, and James Tenney; and Stéphane Mallarmé’s Éventail de Madame Mallarmé (1890), a poem inscribed on a fan as a New Year’s present to his wife, Maria Gerhard. In particular, I’m searching for the gifts of art history that traffic in intimacy, generosity, and care.

Traditionally, etiquette would have formalized objects and acts of the occasional around principles of the apt and inappropriate. 2 The inaugural CounterPulse Festival (CPF), however, invited us to reimagine our social, moral, and aesthetic customs of beginning (inaugurating) and being (ourselves). In the spirit of these inaugural beings, let’s spill our drinks, make a fucking mess, lose our heels, heal, summon the dead, get lost, walk, strip, and love — beyond the circumstance — after the fact — a retroinauguration — to the future arrival of guests to come, here, again. 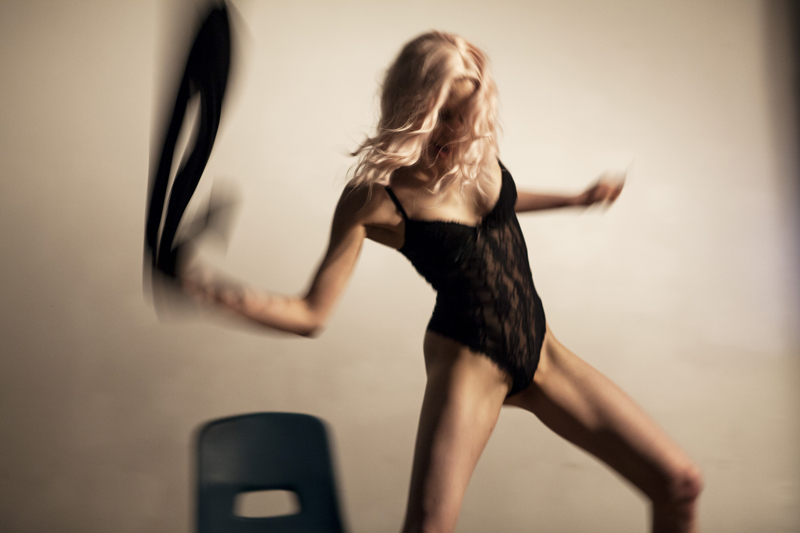 The clomping gait of a one-heeled nightmare marks the place where stiletto tip turns first sod. 3 Wrapped in all manner of latex with a thin tuft of freshly-cut hair on the edge of her lips, she reads from her correspondence with a man named J. Dream. Her tone becomes increasingly violent and we feel the gulf between his addressed desire and the antipathy of her receipt. He closes his letters “Sensually,”; the sign-off/of men who imagine they know: “But now I know, I see what you feel,” signs J. Dream — the letter-closing signed by all men who pervert touch-as-knowledge into “knowing-touches” extended with poisoned regards, here sweetened by the soft tip of a banana. A particular sweet: saccharin. Each peel summoning those who’ve exposed the minimal reward of the sweet (sweety, sweets) as saccharin: Anna Banana, The Guerilla Girls, Carmelita Tropicana. In the syncopated gait of our contemporary Sciapod, we take shelter under the shadow-casting sole. There we play, try-on, fix, adjust, twist, undress, peel. These are the queer builders’ rites.

A Gesture of Daily Groundbreaking

Take one heel and press it firmly into floor. Lift the toe while shifting the foot left to right. This is best done in dance studios which can’t let go of their marley flooring, on office rugs and carpets that reek of AT&T, and in the living rooms of all YIMBY profiteers. 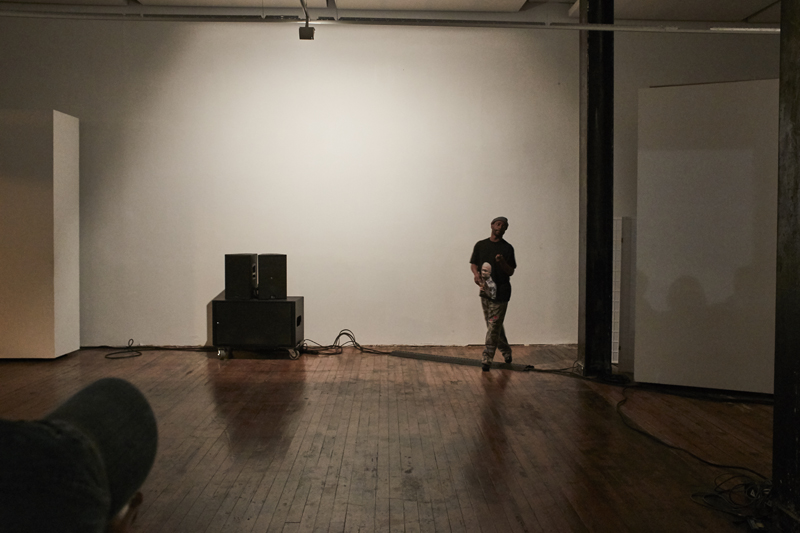 From keyon gaskin’s this is an artwork. Photo: Alexander Girard.

A Spilled Toast to keyon gaskin’s this is an artwork:

Could there not be a gesture of dedication that makes this economy spill over? A gesture that exposes potentiality rather restitute power? Could you dedicate your care to others without ingratiating yourself to them?

Folding chairs too belong to that strange category of the occasional.

Occasional Furniture: Made or adapted for a particular occasion or for infrequent use.

At each fold an invitation to sit in arrangements guided by circumstance — here, “ART” as our state of affairs. this is an artwork / this is for you / you are a community / you are my material. “for you,” this opening dedication gives, and we take — a seat. He ingratiates himself to us by pulling up chairs and making eye contact. Through that moralistic economy of indebtedness, he makes us the material return on his kindness. We slowly realize that the seating arrangements are determined by race and gender: a single row of white women; a clan of white men tucked behind a wall; the only two padded chairs in the room turned thrones by two Black women, and I feel lucky enough to be on the floor near them. We sit and wait. this is a prison / leave when you want. Against the regulatory binds of debt, we apparently can leave, but nobody does. We stay for reasons I’m not totally sure of. We all sit in some form of uncertainty. Thankfully, this is not a prison.

A stranger enters. gaskin informs her of what’s she’s missed. Mid-speech, he spills his cocktail on her chair. The whole hushed atmosphere (a symptom of performance scenography stripped to its waiting-room bones) lights up for a split second and we spill into a less-charged present. The painful awkwardness of precarious life, now touted as an art form in itself, can be such a drag to purchase seats for when, indeed, those seats we left to take these ones feel all too similar. Ungainly, and without the grace afforded by that spill, I fold. 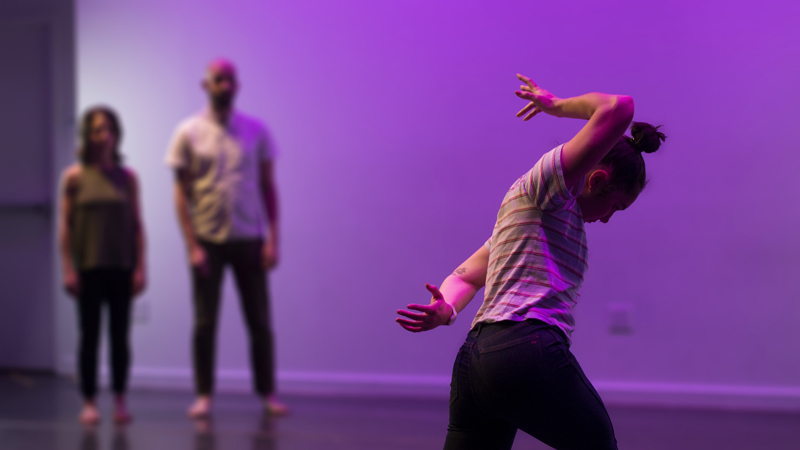 An Elegy for Good Strong Hands:

We bury to remember. We write funeral elegies to resurrect.

— Marian Sugano, “Displacing the Monumental.” The Poetics of the Occasion. p. 103

After attending Arletta Anderson, Adam Smith, Eric Garcia, and Melissa Lewis’s Good Strong Hands, I rushed home to find my copy of Henri Lefebvre’s The Missing Pieces. Within, I knew I could find citations for lost artworks, names, conversations, and ideas that I might offer in response to the artists. In particular, I was looking for something to fill a vacancy within the work: mid-way through, the performers tell us that a whole section of the show has yet to be planned. We sense we’re sitting in the something of nothing here; not the force of Yves Klein’s Leap into the Void (1960), nor the refusal of Tehching Hsieh’s No Art Piece (1985–1986), but something akin to the presence of absence in Ray Johnson’s Nothings.

Home, looking for Missing Pieces. Moving piles of books, dirty clothes, graded papers, and dog toys, I find nothing. I close my eyes and map the last encounters:

After this small hoard-digging dance, I give up and accept its loss. In a public talk I held with Helen Paris of the performance company Curious, she described the “small choreographies of loss” witnessed during her time as staff for the Lost Property Department in London. As research for the performance work Lost & Found (2005), Paris inventoried lost item claims, noting: “I witnessed the tragedy and beauty of loss daily in the ghostly curves and contours traced in the air […]” 4

I inquired about a series of odes given at the end of the performance (odes, we might recall, also belong to that forgotten family of occasional verse). I was only able to catch a few of them clearly, the rest I apparently made up. I’ll leave it to you to decide which were present: An Ode to Chapstick. An Ode to Being Gay. An Ode to Odes. Lewis was kind enough to offer me the script she was reading from — a folded piece of paper, handwritten with the following words:

You live far from here now.
Sitting in the sun.
Eating sardines on the hill in the cemetery.
Kisses.
Baths in the woods in Berkeley.
So very gay.
Felt very cared for by you.
Miss you. Thank you. 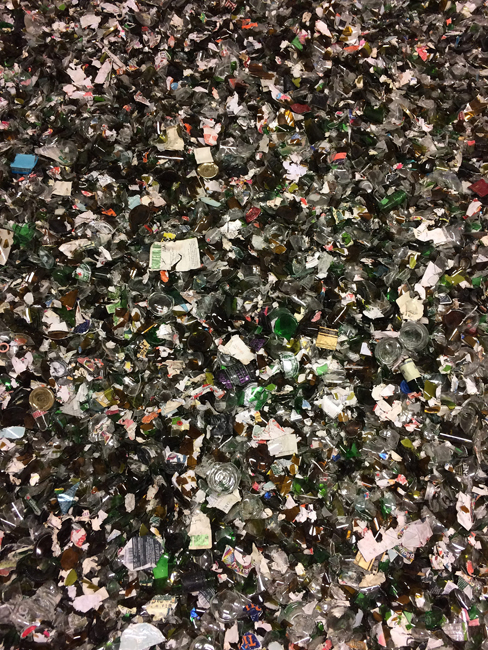 But if I were to be true to that idea of evolving, then I would have to ask some new questions. So my question was walking, and my answer is… walking.

To Mica and Ruairi, a bouquet of Spiny Aster (a.k.a. wolfweed, Mexican devil-weed or devilweed aster): a warm-season perennial that can grow three feet tall.

A Dedication to Dedications in Daughters of a Riot:

These daughters pay homage to the Compton’s Cafeteria Riot of 1966. Through the thin smoke and broken mirrors of a… drag revue… Dr. Dreame, Felicia Flames Elizondo, and Rexy Tapia commanded the stage with a music stand and binder of testimonials. In Flames’s retelling of gagging over her first meeting with Tapia, she dedicates her activist work to the trans women of color who have made her life (all of our lives) that much more livable. From Flames, we learned the value and force of the simple and sincere tribute. During her direct address (menaced by a framework of well-meaning camp), the coffee cooled, the doughnuts hardened, the steps were forgotten, and we sat with the ghosts of future arrivals. 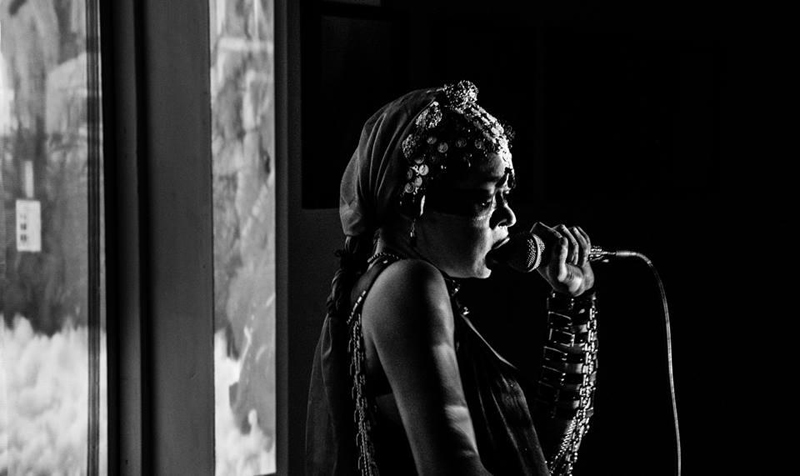 Alex Burrell in We Inherit, We Transform, We Heal. Photo: Robbie Sweeny.

A Cinerary Amphora for the Phoenix We Inherit, We Transform, We Heal:

Let me publicly risk hyperbole and what I was so hesitant to say to Olagbaju at the end. Given the neoliberal-New-Age chokehold on the Bay, I’m chary to let the words magic, heal, and transform float freely. How, in good faith, can I address the gifts of these things to their rightful recipients? Directives from within:

From Spain’s cloaked embers, tired and fresh wings of the Phoenix.
From Sky’s heels, sharp clacks of time washed slowly down steady poles.
From Burrell’s notes, futures sustained within futures drawn.
From Williams’s audacity, a revival of ancestry in the alchemy of smoke.
From Willis’s breath, the illocutionary and spiritual force of prayer.
From Olagbaju, vision.

Not vision under the cheap words of innovation, mind-bending, or experimental, but in the sense of seeing for us, those of us who look (at times blindly) aslant for difference at any cost. Dear Yetunde, in the final rotation of this kaleidoscopic festival, we left with a sense of hope for the future of performance in the Bay, for the future of support for young women of color in presenting their expertise, and for the future of that very politic of support so gracefully embodied in all of your efforts.

To all of the artists, presenters, clubs, workers, and audience members who made the inaugural CounterPulse Festival possible, thank you.