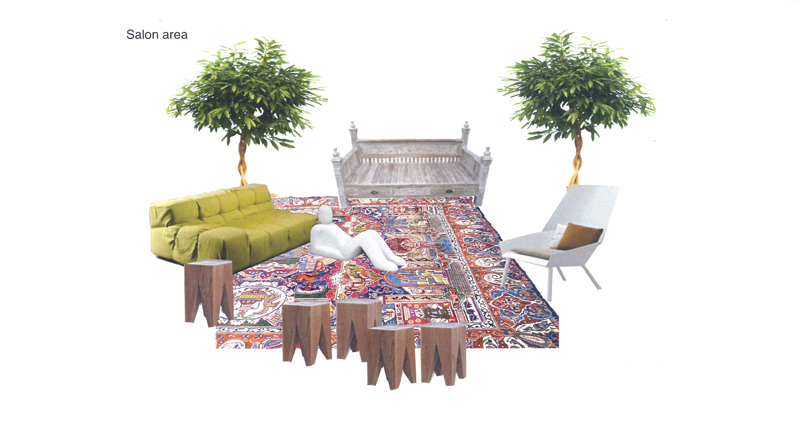 An initial 3-D rendering of the Living Room space.

I was the producer for Living Room, working alongside Suzanne Stein, the curator of the project; we were excited to make this — our first collaboration — happen, and about six months out, we started the planning process by discussing what Living Room would be or could be. We knew from the beginning that we were aiming for a day of creatively bent conversations in a homey environment; but what else?

Before the Snøhetta expansion, we had a flexible space called the Schwab Room located just off the first-floor Botta Atrium and concealed behind enormous sliding wood doors; in those early meetings, we thought about how we might transform that space. Though it’s now a storage area, the layout of the space then was kind of strange — low ceilings with in-set lighting, wood-paneled walls, and in the center two large columns that always complicated sight lines. We agreed that trying to re-create the look of a Stein salon in this rather corporate, innocuous room was not the goal, and instead set out to shape an inviting, comfortable, and inspiring space where people could listen, linger, and be present. “Living Room” meant just that to us: an intimate place for many people, many lives, and many experiences.

We made lots of hand-drawn schematics (heavy on the quadrants!) to figure out the division of space and activities, and plan for visitor flow. The following possibilities, though never materialized, were strongly considered: a corner where you could get your shoes repaired, a place to listen on headphones to a curated program of music, a nook for reading books brought in by the public, some sort of shared library. Suzanne and I quickly dismissed the notion that we’d design the space ourselves, and instead commissioned Supernatural, a local firm. The designers’ first proposal included 3D renderings of spatial layout, furniture, and décor, demonstrating they truly understood how the Schwab Room would be used; one of these would eventually be featured as our lead image to promote the event.

Next we needed a “personality” to emcee the day, reel in the talent, and keep us all energized and on track (and so Suzanne could focus on the program). Suzanne suggested the artist and curator Margaret Tedesco, whose voice I’d always loved — the sound itself, and her way of articulating words. An incredibly engaging individual, she just has a way of making you feel comfortable. I thought: What an inspired choice! 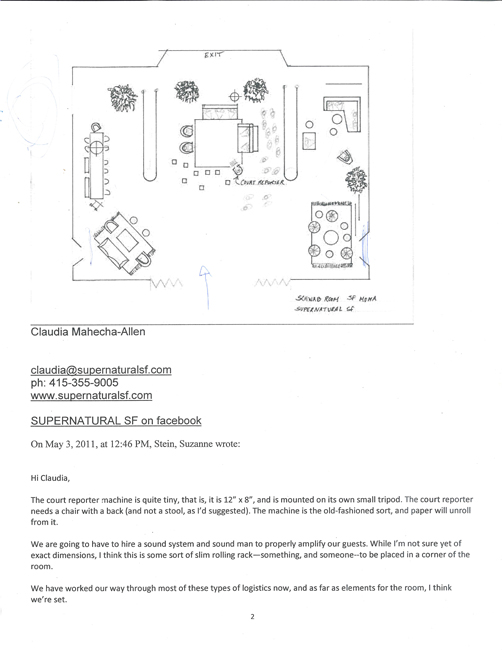 Margaret, Suzanne, and I began meeting regularly to select participants — a real challenge. We hashed things out over a couple of very long sessions, each of us advocating from our respective lists of potential individuals we wanted involved; what stands out is how much talent we had to cull from— this area is packed with amazingly talented and creative people. It was important to us to have a variety of voices and disciplines represented, and our collective heads covered poetry, dance, film/video, curatorial, education, visual art, music, and performance. Our oldest participant was in his late eighties and our youngest in her early twenties. Another meeting was spent designing the conversations. What guests would flow well together? What would one experience juxtaposed with another be like? Did we include a cross-section of practices? Did this group seemed too skewed in one area? It felt a little bit like figuring out how to sit people at a wedding (without, we hoped, the bad blood in any art scene’s inevitable familial dramas).

And how would Margaret lead the conversation? We took the approach of a parlor game, Margaret suggesting prompts to help people figure out what they would say ahead of time. In the event that someone was running over their time slot, we devised a very polite way to pause the conversation: Margaret would simply say “May I interrupt you please?” I can’t even remember if she ever had to employ the phrase, but I loved that we had that in our plans.

The Supernatural designers created a “heart” in the center of the room between the columns, demarcating it with white scrims, a bright yellow wooden structure, chairs, and a well-worn, buttery leather couch. We had area rugs and poufs arranged in the middle so that the audience could come in close, as well as benches and stools lining the perimeter; we didn’t want a separation between listeners and speakers, and this was the closest we could get to a “conversation pit” without digging out a shallow cushioned barrow in the floor. The outer areas of the Schwab Room included a long banquet table with a patterned table cloth, a wooden chandelier hanging above. More seating clusters with comfy furniture occupied the farther corners. 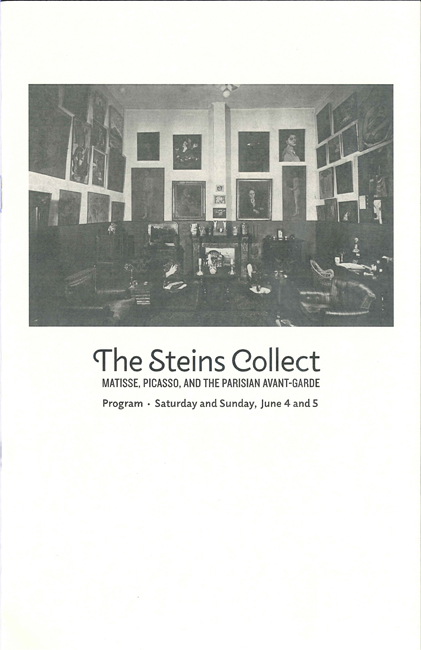 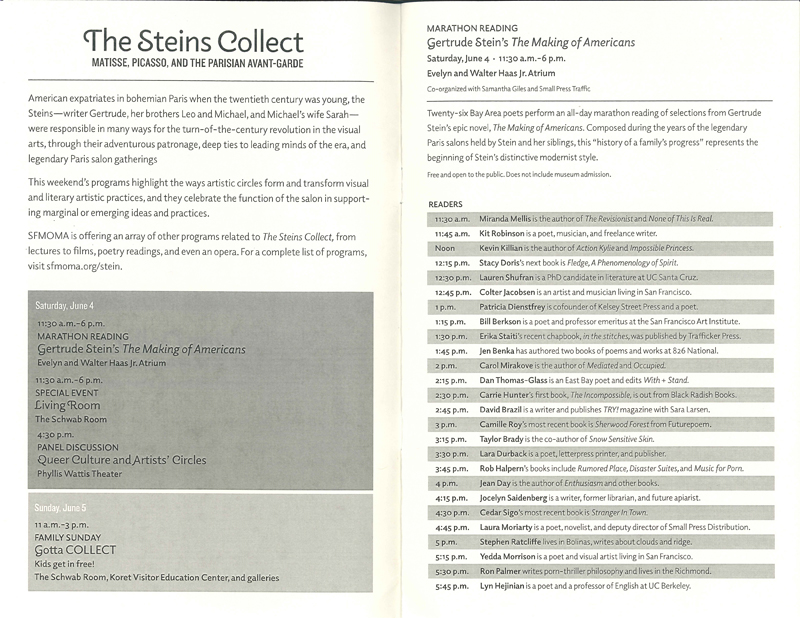 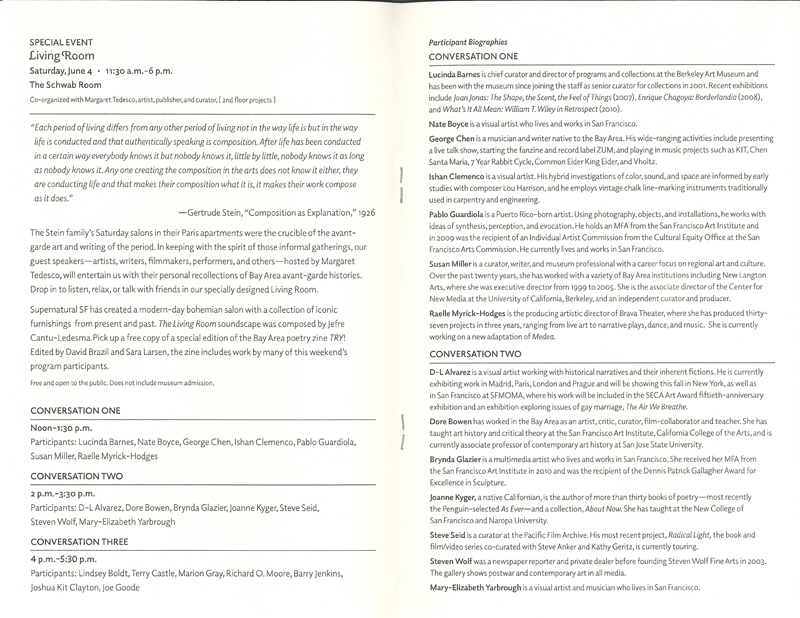 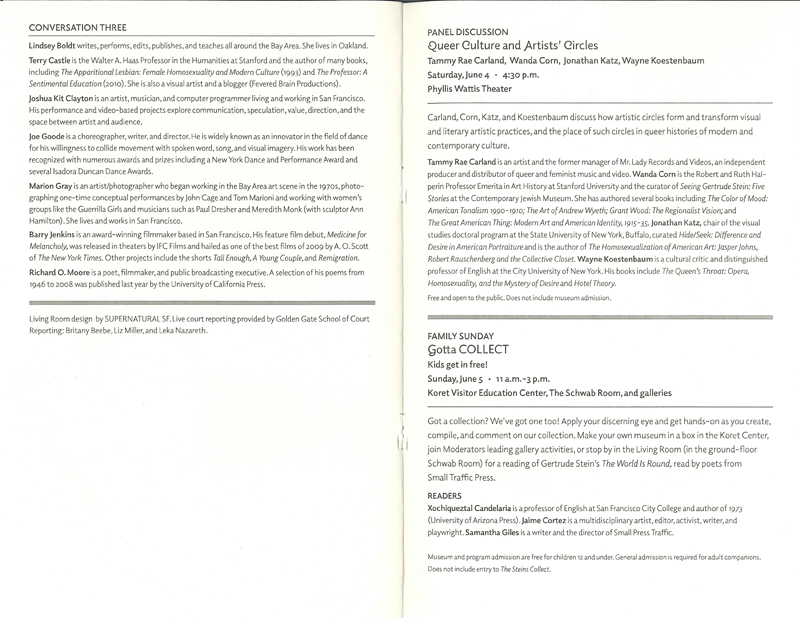 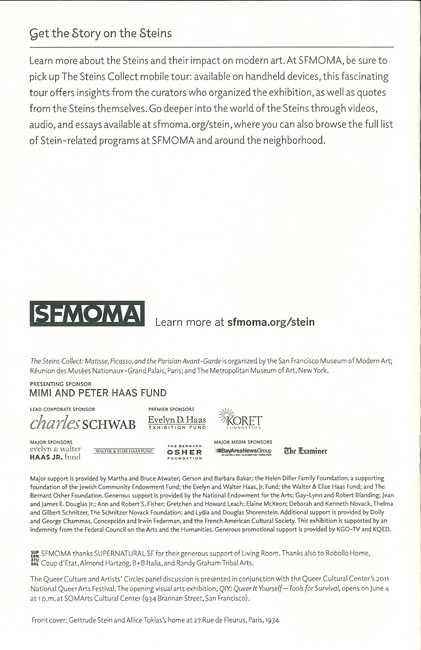 The mixi- and-matchiness of furnishings and their arrangement kept the space very connected, and I think that really came through: people streamed in and out all day, some staying for only part of the conversations before settling into a corner to read the poetry zine that David Brazil produced, others coming to relax, converse, and survey the scene. Lots of visitors took advantage of the “conversation pit” and sidled up close to listen to the guests recount personal stories of the avant-garde. There was palpable energy buzzing around, a warm feeling as friends and colleagues encountered one another; strangers and unsuspecting wanderers, meanwhile, were captivated by the casualness of the surroundings or lured in by their curiosity. Those who lingered to hear the personal recollections could, for a moment, be enmeshed in a time past. One moment that particularly stands out is Joanne Kyger’s description of the North Beach literary scene, and the rise of the Beatniks amid the backdrop of the Cold War and cultural shifts throughout the country. Her vivid, witty descriptions of place, time, and denizens of the Dharma Committee positively transported us all back to 1958. One of the Committee rules she recounted was that “all members of the Dharma Committee are ‘cool.’ If they stop being cool, members of the Dharma Committee will help them get on their ‘cool’ again.” Other rules involved secret badges, sharing Dexedrine dealer tips, and above all else: loyalty a must! 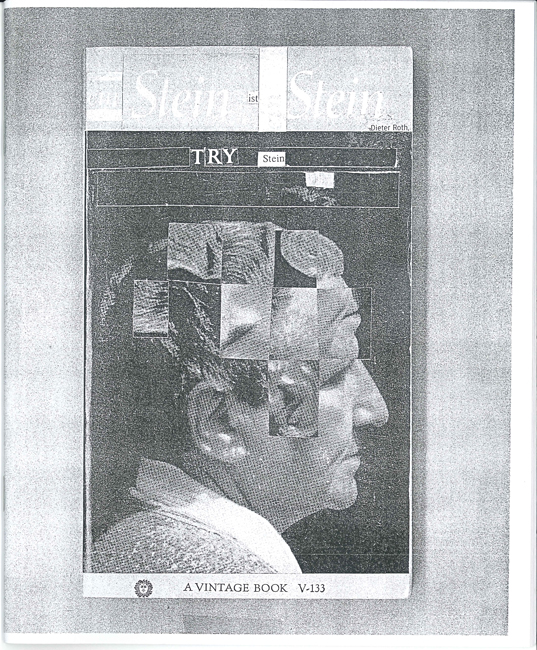 Rather than have speakers hold microphones, we chose to use lavalier mics to bump up the volume ever so slightly while keeping the acoustics sounding natural. We also hid microphones in the potted plants around the conversation area to pick up the ambiance! One of my favorite things was to include our version of Muzak — a sound bed we commissioned from Jefre Cantu-Ledesma called Conversations with Myself. It was a dreamy forty-five minute soundscape reminiscent of Cocteau Twins; the volume was kept low so as to not compete with the conversations and take on more of a subliminal feel. We produced a CD version with artwork designed by Jefre’s Root Strata record label co-founder Maxwell August Croy printed on the sleeves and distributed them to guests and visitors. 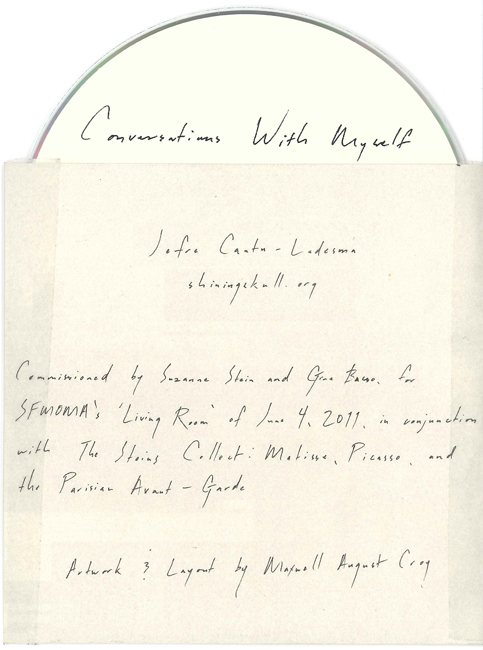 Jefre Cantu-Ledesma’s Conversations With Myself CD and slipcase.

Each break was about a half-hour, so guests would usually stand around and talk to friends, family, and the public; some seemed interested in keeping the conversation going, while others headed to the Green Room for quick sustenance or a break from the crowds. During this time the marathon reading of Gertrude Stein’s The Making of Americans — which was happening at the same time in the Atrium — seemed louder, so there was some flow out to that area. There were lots of people mixing, including those local luminaries not presenting, like artist Leslie Shows and the late poet Bill Berkson.

Though Open Space has posted audio recordings and, of course, copious photographs of Living Room, we also documented the proceedings in a very unconventional way: we hired stenographers. To the untrained eye, the rollout from the stenotype is impossible to comprehend because it’s a phonetic language all its own, one concerned with sound over context, and so completely divorced from the way we experience written language. The stenographers’ rolls became an object about language and an artifact of public speaking. We ripped up sections of the scrolls and gave them away to guests and anyone who wanted a “piece” of the day.

To say that Living Room occupies a special place in my heart would not be an exaggeration — from the collaboration with Suzanne Stein and Margaret Tedesco to the group of people we pulled together and the fantastic reception that the day received, it’s a program that continues to kindle the best of memories of my time as a producer at SFMOMA. I hope that those who were there, or are experiencing it for the first time as an archival oral history project here, feel more connected to the city’s past, its people, and places. Long live the Bay Area avant-garde!