The Best Museum in the World 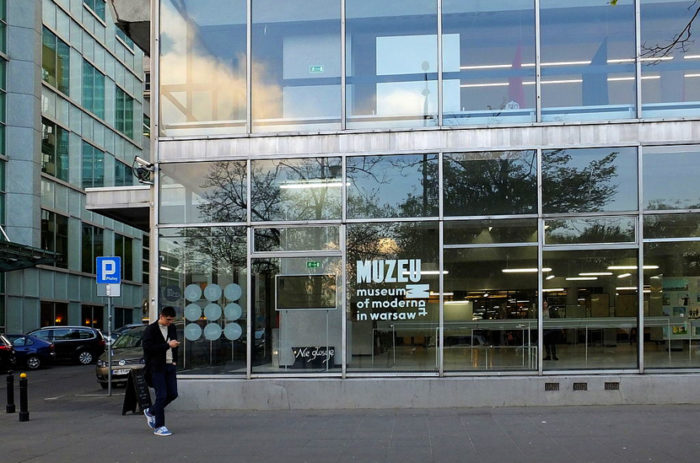 Because it wasn’t what I was expecting, I walked right past it: a low, glass-clad rectangle, a clean-lined mid-century rebuke to the ornate camp of Stalin’s Palace of Culture directly across the street. I had only been in Warsaw for a few days, double-checking my map in confusion, retracing my steps under the cold, flat October sky.

At first glance, the Museum of Modern Art Warsaw looked a lot like a giant showroom, which is what the building had been for many years. The museum’s residence in this odd location was the result of a tangled mess of architectural competitions, design and concept changes, disagreements between private architecture firms and government agencies, and contracts awarded and rescinded. In the end, the decision to house the museum temporarily in the former two-story Emilia furniture showroom at Emilii Plater 51 was based on expediency and availability. Yet it produced, for a brief time, an institution for art more accessible than any other that I’ve encountered.

You might think that an all-glass, open-plan building would be unsuitable for a museum, but really that was its strength. The glass-curtained exterior was the key. It made the space porous, permeable, creating a powerful aura of openness. From the street, you could see it all — not just into a dim, glass-fronted lobby, as in so many contemporary museums, but into the entire space, from any angle: the artwork, the patrons, the staff — everything was visible. Most importantly, it was a space you could envision yourself inside. An adage that was helpful to me when I was teaching comes back to me now: That which is unthinkable is un-do-able. When the museum is not obscure or arcane, when your sense of self in relation to the institution is not a mystery, when you are able imagine your place in things, it opens itself to you, and you to it.

I grew up poor, which can be an unreliable thing to say; wealth and stability are relative. Let me tell you this instead: The people who raised me held pink-collar jobs for most of my childhood. My mother was a waitress (later, a paralegal), and my grandmother worked the night shift in a bank doing data entry. Before I was in the sixth grade, my family had moved nine times in the Philadelphia area. A few years ago, my mother and I were reminiscing about some of the places we had lived. “Remember that apartment with the neighbors upstairs, the lady with the little boy about my age? I must have been about four,” I prompted. “Remember when there was a blizzard and they came down and we took all the cushions off the couch and built a fort with blankets and all got in it together? That was fun. They were nice.” My mother looked at me for a moment, puzzled, and then said sadly, “Oh honey — we did that because the landlord wouldn’t turn on the heat. We made a game out of it for you kids. We were just trying to stay warm.”

Lately I’ve been thinking a lot about Zoe Leonard’s poem “I Want a President”:

Leonard’s uncompromising insistence feels right. I want art museums for old ladies and community college students, for people who get there on two or three buses, for the uninitiated and the dissolute, for people who maybe don’t even know yet how much art could change their lives. Cultural institutions can provide, among other things, an education, community, solace, a contemplative atmosphere, and the gift of encountering things that patrons have neither known nor imagined before. But there are often barriers to entry: admission fees, physical accessibility, and a lack of diversity, to name just a few of the most common. Though I’m white, a professional artist, and a published art critic, I still feel awkward or estranged in many institutions for art. Even when you escape poverty, it’s not unusual to feel that you still don’t fully understand high-culture mores and social codes, and art museums replicate the societies in which they are founded in ways both deliberate and unintentional.

MoMA Warsaw wasn’t just accessible because it was literally transparent. The museum was also free. Occasioned by the Metropolitan Museum of Art’s recent decision to charge a $25 admission fee for out-of-towners, there’s been a resurgence of talk about economic access to spaces of culture. An open letter to the Met signed collectively by the College Art Association, The Material Collective, The Society for Medieval Feminist Scholarship, and other organizations laments the loss of, “[…] free and low-cost public access to educational and cultural institutions, a tradition that was once the engine of social betterment for low-income and working class families.”

“An engine of social betterment” is abstract, and might even be seen as condescending; but if you need a concrete, representational portrait of the benefits of a cultural education, you have only to look to my example: Museums opened a world for me. Free and low-cost access meant my mother could sign permission slips for field trips and other outings, and my participation enriched my understanding of, and allowed me to feel myself a part of, culture. Did art institutions change the course of my life? Yes, they did.

In broader terms, I know that my family’s experience with poverty is at odds with our whiteness. According to the US Census Bureau, the median American household income in 2016 was, for Asians, $81,431; Whites, $65,041; Hispanics of any race, $47,675; and Blacks, $39,490. Compare those numbers to the cost of entrance: the Museum of Modern Art in New York, the Art Institute of Chicago, and the San Francisco Museum of Modern Art charge $25 per person; The Philadelphia Museum of Art is now $20 and the Indianapolis Museum of Art is $18. If there is a fundamental question about who art museums are for, then a steep fee provides an answer: When the price of admission is prohibitive, it keeps out poor people. Overwhelmingly, poverty is correlated with race, so if poor people can’t come into your museum, it follows that Latinx and Black people can’t come into your museum. In which case, if you haven’t gotten there already: That’s not a money problem, that’s an institutional racism problem.

These days, museums offer lofty mission statements like “committed to sharing the most thought-provoking modern and contemporary art,” “to stimulate appreciation for and advance knowledge of works of art,” and “to engage and inspire a diverse range of audiences.” But what cultural institutions really need in order to fulfill their missions, overall, is access, which is economic as well as psychological.

Back in Warsaw, the building at Emilii Plater 51 is gone, a victim to developers in a rapidly growing city. MoMA’s exhibitions have temporarily shifted once again, this time to a white-cube pavilion (still free) on the bank of the Vistula River, to remain there until the construction of its permanent home can be completed in a few years. But though the old building no longer exists, for me it stands as an example of what’s possible for art museums, even if they aren’t housed in transparent spaces. Despite the recent trend reflected by the Met’s decision, my optimism persists — with a redirection of energies toward the public good (something that is sorely needed right now, in all areas), spaces that are accessible and inclusive are possible.

Here’s another adage: We see things not as they are, but as we are. I would amend this to include: and as we were. The cultural education of people who grow up (and continue to live) in circumstances like I did, and their enjoyment of art, is not worthless because they are “worth” less. In fact, it is worth everything and it has the power to change those lives in ways big and small. Ordinary people without any particular cultural training need to see into art museums, to be able to project themselves into those spaces and envision themselves taking part in — and being part of — art. And art museums need the ability to look out, to see the current and future patrons on the other side of their walls, where other forms of living go on.