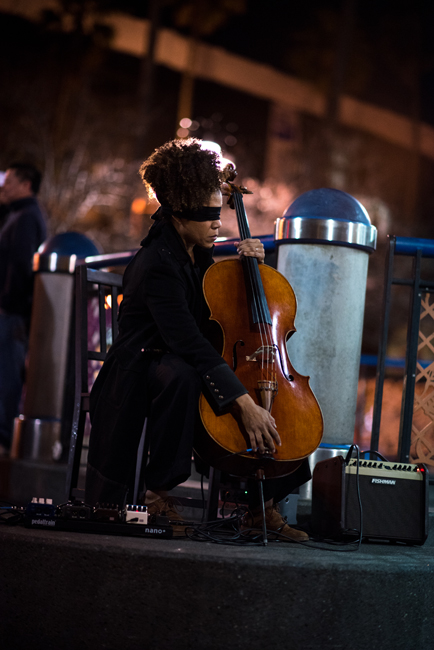 Editors’ Note: We asked the writer and curator James Fleming to attend each of the live moments in the Limited Edition program and create short, visceral responses in conversation with the performances. This is the fourth, written after seeing Simone Bailey’s Sway, Clench, Release (Requiem No. 415), performed February 24 as part of The Lab’s 16th and Mission Project in the BART Plaza.

We aren’t given the contents of her gaze. Instead, we observe her exquisite aftermath, a totality of sound ululating with the muttering mouth of the 16th St. Mission Plaza: a requiem in darkness.

Requiem, the accusative singular, is a noun being done unto.
Priests say: Grant them eternal rest, O Lord.

I think of the designed impotence, structured from lifetimes in defense of complicity, white people employ when facing the effects of rapid gentrification in Black communities.

Migrations are similarly documented: endless lines and lists recording the transition of driven peoples, cultures; each line a failed unravelment of an incalculable chord.

A man kiss-calls a pitbull back to his side. Children are shrouded, nestled along, and dropped by mothers into the balmy, wavering glow of the subway entrance.

Entire communities being done unto. The requiem effortlessly swells —
into longing, maybe love, and release — for those who have gone, are going.