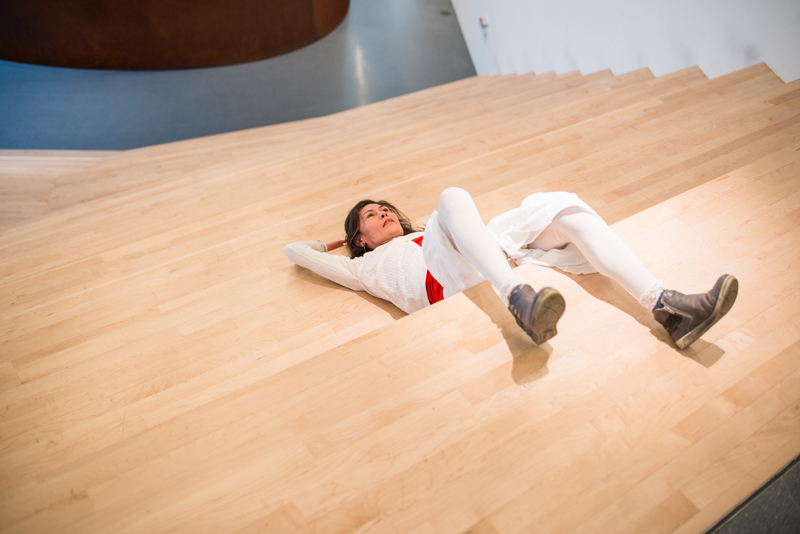 Before we began, I told Justin that I was writing about the work. Could I carry my notebook? He didn’t like the idea. “We ask people not to be on their cellphones,” he explained. “So they don’t mediate their experience.”

I placed my hand on top of his. He said, “Close.” I closed my eyes. I felt the heat of his hand. “Open.” I faced my reflection in a window. I saw Justin behind me. “Close.” I felt Justin leave me. I noticed my posture. “Open.” Justin was on the ground in front of me with his belly pressed against the window. He began rolling toward me. “Close.” “Open.” Justin was lying at my feet. “Close.” He led me down a flight of stairs. I felt his center of gravity moving through space. He led me into the rusted canyons of the giant Richard Serra sculpture, Sequence (2006).  I knew when we entered the sculpture because the museum’s din receded. “Open.” The sculpture’s smooth texture looked like wood. I hadn’t noticed that before. “Close.” “Open.”  I saw Justin walking away from me into the sculpture’s maze. I wanted to walk after him. He dove back into view, calling, “Close.”

Afterward, I asked Justin to describe his experience as an action movie guide:

The elements in the score are simple. Rarified. I’m working with time, duration and framing; I’m making choices based on the feeling of the other person’s body and the sounds of the space. It’s a special job. How can I make a familiar space strange? I’ve been an audience member inside the experience. Eyes closed takes me to another landscape. My attention goes sideways and backward. And then I feel ready to see something. To have something gifted to me.

When I asked Jones how BodyCartography’s connection to Body-Mind Centering (a somatic modality) informed the work, he responded, “We’re trying to engage in state, not image. How can you create choreography that isn’t about the image of the body, but about feeling?”

“But there is always composition,” I said. “Yes,” he agreed, “But it’s not composition like you might see in a Cunningham dance. Beautiful things happen, but it’s really about what can you feel.” 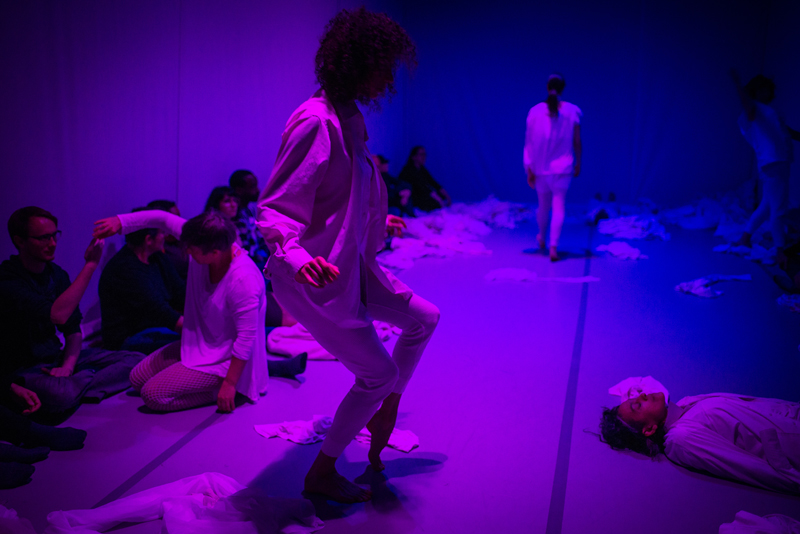 Maurya Kerr (foreground) and Julie Tolentino (on floor at right) during felt room.

It takes a long time to begin to feel.

I walk through blackness into a silent room.

Women dressed in white are on the floor. A pile of white fabric is in the corner.

Form emerges over a long gestation period.  Bodies shift in small but intentional ways: sit, stretch, fall through the side of the spine, lie down.

Bodies nestle into one another. Limbs overlay. Eyes closed, the many-limbed organism rolls and shifts. The group shares a controlled, insistent agitation.

You are lying on the floor. I sit down next to you. You start to move toward me. There is only an inch of space between us. We aren’t touching yet, but I can feel the heat from your body. I feel a brushing sensation — the suggestion of touch.  My skin grows antennae. Now we touch, just barely. 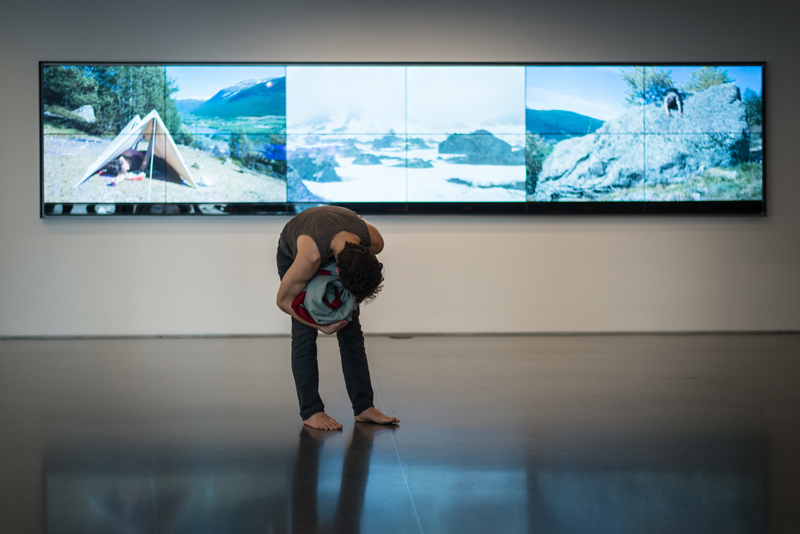 Otto Ramstad during the Lineage performance.

One road to feeling is other people.

A man stands in the broad lobby of the museum.  Next to him on one wall is a video triptych of wilderness.

Left panel: a mountainside on a sunny day. The man assembles a flimsy lean-to out of a piece of cloth and two sticks.

Right panel: The same landscape. The man rests against a large granite boulder.

Middle panel: A similar wilderness covered in snow. A blizzard fills the sky.

Meanwhile, the man in the museum curves and spins through space in drifting arcs. He spins with an invisible partner. He spins into a distant wilderness.

The man in the museum rolls on the floor. He passes in and out of form.

Onscreen, in the wilderness, the man falls asleep in his makeshift tent.

I try to imagine — to remember? —the feeling of being alone in the wilderness. The feeling of resting against the earth.

The man in the museum finishes his dance.

In the middle of the snowstorm, the man appears.

Special thanks to Justin Jones of BodyCartography.