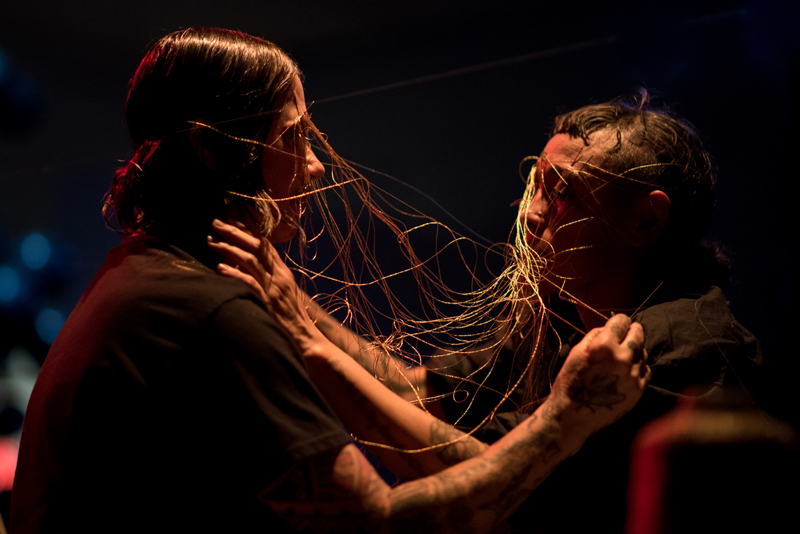 From Julie Tolentino’s .bury.me.fiercely., performed at The Lab, February 18, 2018. All photos: Hillary Goidell.

Upon arrival at The Lab on an unusually windy February night, I encountered punctuations throughout the space that Julie Tolentino would map out during her impending performance. (Ritual.) Among these was an altar. A mirror rested behind a burning pot of flowers and leaves, exuding an herbaceous scent that slowly infiltrated and awakened my senses. In response to Tolentino’s invitation to engage with the elements on display, I proceeded to isolate and scan my senses, attending to their slow rhythmic responses. By conveying them here, I add another layer to her processual, communal burial.

The burial suggested by the title is fragmented, as if the artist is imploring us to pause, to rest, as we consider her peculiar invocation. .bury.me.fiercely. Rests. 1 In Tolentino’s title, punctuation inversions mark time, an action, an elusive subject/object, an adverb. Fiercely. She demands. Not by accident. Nor by force. 2 Here, the artist asks us to pause. Before witnessing her revelation. Before burying her. Fiercely. As fiercely as she has been living her life for decades, from coast to coast, continent to continent, as an activist and artist of many forms — among them, live performance, performance as documentation, and the creation of queer night culture.

As an artist and archivist, I situate myself accordingly, offering my own archive of feelings 3 and sensations, which are activated by Tolentino’s ritual generosity and explicit body, itself tethered to the body in pain. 4

Her feet draw whispers across the paper floor in concert with the fragmented words projected onto the wall beside her. She begins the process of writing the body, her feet remembering the silhouettes traced on the ground. 5 She dances like a tree in the wind, on this windy night, her limbs tracing enigmatic silhouettes in the air, capturing the excess of her hair and its shadows. Rhythms pulse slowly and fluidly. They run deep throughout my body, especially close to the root.

The sounds of her tracings on the floor form a score for the arranger, Cirilio Domine, in front of her. He sets up flowers, leaves, and branches, all in a state of metamorphic decay. He searches for ways to bring them to life, or at least to a liminal state. Her face is obscured by an excess of hair, an overgrowth, which carries its own stories. After she removes the excess and places it on the ground, she positions herself beside the arranger. In stillness, they appreciate the arrangement of residual earth before them. Rest. 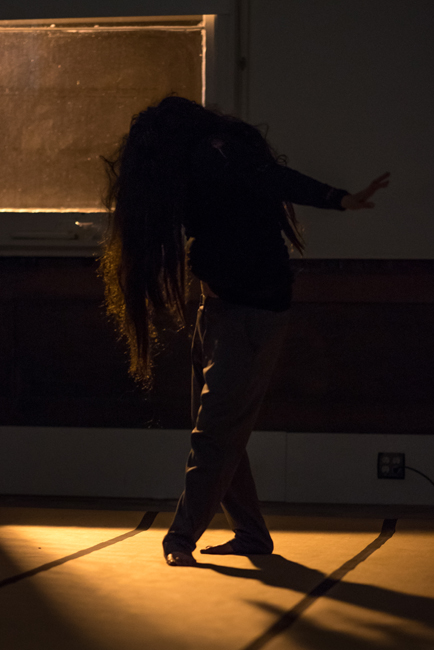 An attendant, Pigpen/Stosh, meets her in the center of the space. A precarious performance unravels, in which the tactile and the visual intertwine gently. 6 The texture shifts back and forth from softness to sharpness: a face-to-face encounter, one like Lévinas had never imagined. 7

As this delicate encounter unfolds, the attendant begins to pierce needles into Tolentino’s face, above her eyes and mouth. The precise care of this action is matched by the arranger, who threads a clear wire throughout the space, connecting the pillars and vertical structures that surround them and us. Them and us. As if there were such a separation.

I imagine the transparent wire as if it were the fascia of her body — this corporeal dwelling in which I momentarily reside. The fascia cuts through the flesh of the space, as the arranger creates punctuations that form a zigzag structure. It is taut, unlike the yarn that the two performers in the center continue to wrap around and around each other’s heads. The yarn has a life of its own, becoming increasingly entangled. It works its way around the needles that rest on the fragility of their interwoven faces.

The piercings are removed. Gently. Blood streams down her face from the broken skin above her pretty mestiza eyes. 8 Cathartic. Blood memories release through purifying tears. 9 My breath is interrupted. I become hyperaware of the skin on my face. My awareness is gathered above and below my eyes, my lips, producing a vibrating sensation, where the affective and tactile meet. As an embodied spectator, I am left feeling vulnerable in our entanglement. Rest.

They move closer to the altar. Black balloons become black air molecules; a large blanket of black plastic awaits Tolentino’s processual metamorphosis. With generous hands, her collaborator contains the blood memory streaming from her forehead, as if to refuse abjection, or perhaps hold it closer. Other textures emerge from this space of dematerialization where the body becomes legible before becoming illegible. Brown and red flesh tones amid the black plastic are met with soft white cotton. The white material appears as clouds she gathers close to her body. A moist rag, thick with red, lies beside her, juxtaposed against the black that envelops her. Rest.

For the final moment that occurs in the center of the space, she is submerged under a large black vinyl mass. The amorphous shape begins to move and flashes of flesh — hands and feet — emerge from underneath, accented by a small moving light on wheels operated by her collaborator.

Before the aesthetics of blood were instrumentalized in the postwar performance art world, 10 indigenous people performed their own blood rituals, from Mesoamerican flesh offerings to Babaylan blood rituals — before, during, and after colonization and all the spectacular violence that came with it. Perhaps such healing rituals and violent displays are sediments in the recesses of Tolentino’s body-memory — a product of inter- and intracontinental miscegenation — a body that exists in the spaces between theater and anthropology while citing/sighting the other history of intercultural performance. 11 Shuttling between legibility and illegibility, pornography and ethnography, 12 she enacts radical remembrance, as if to ask, “What does it mean to hold another’s blood memory”?

At a time grossly characterized by dissociation, disembodiment, and unsustainable speeds that result in both embodied and psychic amnesias, what is left to do? Tolentino’s .bury.me.fiercely. proposes a pause. A rest. In stillness, as we listen and feel the blood that flows through each of our bodies, in recognition of our enmeshed fragility. 13