Art Won't Save Us 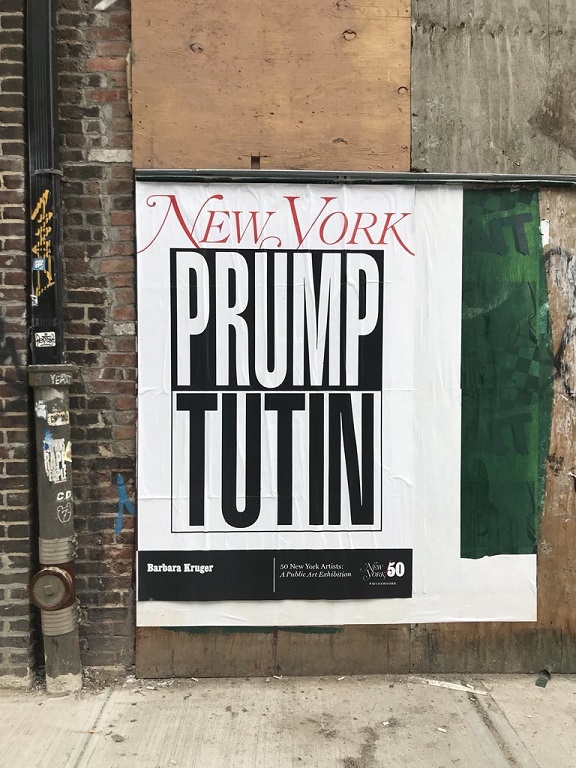 When the art world resistance is hacked by the attention economy

1. In the wake of 2016’s stunning electoral upset, the liberal media went scrambling for a silver lining — and they found it, of all places, in the art world. Over at The Cut, house expert Jerry Saltz declared the post-election comedown a “crucible of possibility” and “call to action,” even going so far as to imagine a scenario straight out of the movies, in which “artists will work with mechanics to disable deportation buses by night.” Meanwhile on Twitter, literary doyenne Joyce Carol Oates volunteered, “Artists thrive on turbulence & estrangement from Establishment/authority–so T***p presidency would not be total disaster, for some,” a tweet that swiftly earned the distinction of being “the whitest take of the whole election.”

2. Fast forward to 2018, and the theory that a Trump victory would be a shot in the arm for a creative class that had sleepwalked through the Obama years hasn’t quite panned out. Instead of the artistic renaissance predicted by the likes of Saltz and Oates, what we got was more of the same: the standard wheatpaste-inspired street art pablum; a second wind for the spiritual heirs of selfie feminism; a reverie of liberal pearl-clutching and self-flagellation repackaged as an updated version of institutional critique. That, and panels — lots of panels — endlessly “unpacking” the role of art in the age of Trump.

3. The rise of Trump has birthed a brave new vanguard of protest art that, all hype aside, mostly amounts to corny wordplay and vapid sloganeering: Marilyn Minter’s “PUSSY GRABS BACK” protest banner at the Kushner-owned Puck Building; Barbara Kruger’s “PRUMP/TUTIN” cover art for New York Magazine; Martha Rosler, another highly regarded feminist artist and veteran of the Vietnam Era’s heyday of radical transparency, posting a “PRESIDEBT TRUMPF” campaign sign to her Facebook page. Then there’s the pied piper of the silver lining theory, Saltz himself, gallivanting around Instagram in a homemade “NOT MY PRESIDENT” t-shirt.

4. Together these efforts occasionally took a more tactical approach, adopting wholesale the language and imagery of actual sixties’ protest movements and work stoppages. Think here of the “Dear Ivanka” campaign, which invited artists to appeal directly to the First Daughter, an avid collector of contemporary art, whose politics are seen as being nominally more moderate than her father’s. Some among them even went so far as to publicly disown artworks acquired by Trump and her husband Jared Kushner in the hopes that they would plummet in value. It’s a funny way of resisting, when many of the same institutional interests also happen to be in bed with the scions of oligarchs and arms dealers. Or consider the J20 Artists’ Strike, billed as a call for arts institutions to take a stand against President Trump by closing shop on Inauguration Day. As anyone who’s ever worked in a factory will tell you, a strike is only as useful as the cost it inflicts through the labor it withholds. But why should we care about the labor withheld by gallerists, curators, and social media managers in an industry that routinely comes under fire for its exploitative labor practices?

5. Maybe none of this is very surprising given the art world’s fortuitous immunity to political fluctuations. It makes sense, after all, that the people who stood the least to lose from a Trump win could also afford to be among the most vocal about its administrative failures and moral excesses. For those who prefer to do their activism from the comfort of booze-fueled gallery dinners and WiFi-equipped airport lounges, political dissent is not so much an inalienable right as a lifestyle perk.

6. Artists, of course, have always liked to think of themselves as rebels but, the truth is, as long as art remains a prestige economy of the free market — a glitzy barnacle on the side of global finance — it cannot be an effective tool for political change. The best it can hope to do is comment on the political situation after the fact, “thematize” it as it unfolds, or in rare, purely serendipitous cases, anticipate it. There’s also another way that art can theoretically influence political attitudes, and that’s on the level of cultural consciousness, in the spirit of Andrew Breitbart’s darkly prophetic mantra: “Politics is downstream from culture.”

7. In order for art to have momentum as a political force, it must have the capacity for mass appeal. Yet the relationship between the art world and the general public has historically been one of mutual mistrust. We’re still dealing with the aftershocks of Rudy Giuliani’s pugilistic crusade to shut down the Brooklyn Museum’s 1999 exhibition of Young British Artists, a cultural skirmish that pitted the public’s perception of artists as deviants against artists’ view of the public as philistines. In other words, art in its current form is broadly incompatible with populism of any form, whether of the traditionalist or progressive variety, since it draws its cachet precisely from its elitism and exclusivity.

8. In any case, art’s cozy rapport with capital means that its potential role as a political agent was compromised long before such basic questions of transmission and circulation could even begin to be addressed. When we talk about the art world, after all, we are always implicitly talking about the art market — or otherwise, those fringe aesthetics and grassroots communities that operate outside of its primary value index and are therefore obsolete within its organizing discursive framework. Today, the sort of dissenting viewpoints rewarded by this discourse are those that are unlikely to deviate from polite bourgeois opinion.

9. It goes without saying — or it should, anyway — that Trump is a particularly libidinal, in-your-face example of everything that’s wrong with a society where politics is experienced primarily as entertainment. But the trouble with the standard liberal critique of Trump is precisely this flair for performative outrage, one that privileges clashes in sensibility over questions of policy. Now that the art world has found an unlikely muse in the figure of a widely despised Twitter addict, artists can continue churning out insider art while keeping their moral alibis and outsider bonafides intact.

10. Even so, all of this is somewhat beside the point, given how expertly Trump’s base has leveraged the aesthetics of neoliberalism against its principal ideologues in the liberal establishment. With the triumph of Trumpism, one could argue, we have finally hit a wall in the collective imagination, or what the late, great cultural theorist Mark Fisher called “capitalist realism”: the aesthetic-ideological complex that not only enshrines capitalism as the normative political-economic system but, in fact, obviates any efforts to envision an alternative order.

11. In effect, the Trump administration has at last solved the conceptual problem originally proposed by the Russian avant-garde and later advanced by the Socialist realists: how to orchestrate a seamless integration of the imaginable and the material, or what art history textbooks commonly refer to, in rosier terms, as the “total synthesis of art and life.” What’s more, it has done so under a devoutly capitalist regime. But if the Soviet era was marked by a cynical veneer of compulsory optimism, our neoliberal epoch is one in which terminal ennui is openly celebrated, whether ambiently, through the flat affect of memes and internet slang, or more measurably, as with the Balkanization of the internet itself into grievance-based identitarian factions.

12. Taking the Russian analogy to its logical conclusion, we can think of the Trumpian turn from the angle of the late Soviet parodic style known as “stiob,” an overidentification so extreme it’s impossible to tell whether the position it adopts is a genuine endorsement or an elaborate troll. Are Trump’s diplomatic blunders, draconian decrees, and late-night Twitter meltdowns the strategic design of a new breed of authoritarianism that thrives on confusion rather than repression or merely a byproduct of his contempt for the norms of conduct? Is his revolving cabinet of cartoon villains and prop-store cadavers a stylized piece of political theater or just a classic case of professional nepotism? Is he a madman or a mastermind? Either way, Trump performs his own incompetence so well that it makes any attempt at parody seem overdetermined to the point of absurdity. In the process, he exposes the impotence and hypocrisy of his liberal critics, unmasking their piety politics as nothing more than compensatory posturing.

13. In this climate of nihilism, any act of dissent, whether sincere or calculated, is automatically aestheticized to such a degree that the distinction becomes moot. Take, for instance, the Guggenheim’s gold toilet controversy. Senior curator Nancy Spector denied the White House’s request for a Van Gogh loan, offering instead Maurizio Cattelan’s gold-plated, potty-themed sculpture America, presumably for its formal resonances with Trump’s personal taste. The inside gag no doubt flared off a momentary pang of catharsis and solidarity for art world cognoscenti. But over time, stunts like these only play into the hands of Trump’s populist messaging: elites care more about symbolic progress than they do about meaningful reform.

14. So far, the “artistocratic bohemians” of the art world, as Saltz calls them, have arguably done little to offset this stereotype. The issue, in part, is class-related. The rollback of public services and arts funding, along with the skyrocketing of property values, that accompanied the ideological triumph of neoliberal consensus over the last several decades, have been especially hard on artistic production. For all of its enlightened rhetoric and “woke” social justice advocacy, today’s art scene is steeped in cultural conservatism.

15. In part, it’s generational. It’s no coincidence that many on the frontlines of the art world’s so-called “resistance” (Saltz, Rosler, Minter, and Kruger included) belong to a generation that still believes in the purity of the transgressive gesture. Yet the legacy media model they grew up with and rebelled against is ill-equipped to contend with the emergent digital platforms that presently mediate political affinities in evermore dizzying, nonlinear ways. As Angela Nagle argues in Kill All Normies, her précis of the online culture wars, the alt-right has successfully co-opted the prankish, postmodern strategies of the New Left at a juncture when political binaries no longer apply and liberal counterculture has gone mainstream.

16. Having convinced themselves that fascism is back and Russian collusion is everywhere, the art world’s would-be revolutionaries are content to ignore the more systemic dangers lurking among the digital networks that increasingly govern our everyday existence. The viral footprints of initiatives like “Dear Ivanka” and J20 draw their energy from the data we hand over to Facebook, Instagram, and Twitter, activating an algorithmic power structure that parcels out virtual real estate according to its monetizability. While it’s clear that Trump is a monster of the current moment, his persona represents a throwback to a simpler time when empires went head-to-head and strongmen dominated the world stage. Any truly serious political project to emerge from the art world would do well to start with this uncomfortable reality, taking a long, hard look at its own participation in platform capitalism instead of seeking solace in rehashing the battles of the past.

Editors’ Note, 3/20/18: Some of this material was previously published on Anna Khachiyan’s blog​.