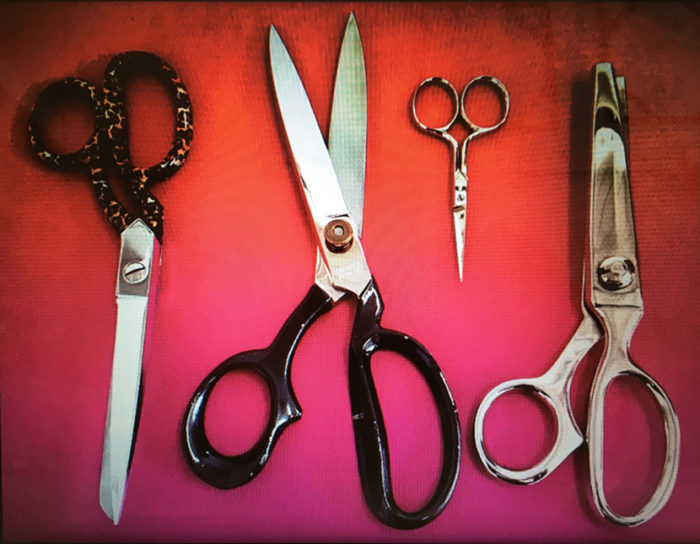 Technically, we did not live on the wrong side of the tracks — we lived right next to them. Our suburban house was the very last on the street to squeeze inside the border of the country-club school district, and more than anything, I wanted to fit in with the cliquey, sporty girls. I did a poor job of it, with my Converse high-tops and my tennis racket from Kmart, and by the time the eight-grade graduation dance rolled around, I was already a flustered jangle of insecurities and hormones. At thirteen, social success could only mean one thing: a store-bought dress. I had one picked out at the strip mall sample shop, a slinky Mae West number with blue satin rosettes stitched tightly to the scooped neck and low-cut back, which my mother dismissed immediately as “too old for you.” She steered me toward something that looked an awful lot like a flower girl’s dress, a light yellow chiffon thing with yards of ruffles. In the moment, and with the shop owner’s eyes on me, I acquiesced — because if we were actually buying a dress, it seemed like I was still getting the better part of the bargain. But a few weeks later when it arrived and I had it hung on the back of my bedroom door, it seemed the ugliest, most unsophisticated article of clothing I ever had the misfortune to encounter. I burst into angry tears and proclaimed that in this dress I would be a friendless, danceless object of mockery, and it was all my mother’s fault. Why couldn’t we have bought the dress I wanted? O how cruel was the world! Of course, she countered as a mother does: that I was a brat, ungrateful, that we could hardly afford such things, what a waste, how dare I. I replied that I could not, and would not, wear such a thing, she couldn’t make me, and then, after many minutes of mother-daughter recriminations, trembling with the terror of my future as a laughingstock, I leapt onto my bed, pointed an energetic finger at her face — think wailing Antigone with some enraged Anne Shirley for good measure — and shouted, “IF YOU MAKE ME WEAR THAT DRESS YOU MIGHT AS WELL KILL ME. YOU MIGHT AS WELL STAB ME IN THE HEART.”

There was a flat, echo-y pause. I imagine myself as my mother must have seen me, eighty-five pounds of tear-soaked, red-faced misery; she had the good grace to not laugh. Instead she spun around and walked through the doorway, and returned with a handful of dress patterns. “Pick one,” she said with steel in her voice, and I obeyed. Three days later I was in the gymnasium, slow-dancing with Brian Moss to a George Michael song while wearing an aqua taffeta spaghetti-strap dress, with floral-print flounces in aqua, pink, and yellow at bust and hem. In hindsight, this dress was no less hideous than the readymade, but never mind. My little sister wore it eight years later; I think it may have even found its way to my niece. If you sew a garment well, it will last forever.

In fifth period we have an elective sewing class, and my machine is set next to Tracey Bagley’s. We rev the machines and speed-stitch the long straight lines on our aprons, which makes the tables vibrate and brings the teacher running to scold us: “No racing! No racing!” When we are sewing our tote bags, joining together pieces of thick canvas and adding webbed straps, Tracey manages to sew through her index finger. She is marched to the school nurse with a piece of the broken needle still stuck in her flesh, leaving a surprisingly wide smear of blood on the enameled machine. Years later, when I teach my friend Dan to sew, I will see Tracey and her crime scene in my mind’s eye. “Just keep your eyes on the space in front of the needle and press the pedal down slowly,” I will tell him. “It’s like driving.”

New Year’s Eve and I am sixteen, living in New York City with my very blonde, very lipsticked, very glamorous older sister and her film-school boyfriend in a studio apartment. I, of course, do not have anywhere to go this evening, so am diligently sewing my sister into a modified bra, and then hiding the bra straps by pulling them into place under her dress and sewing tiny, invisible stitches. We’re standing in the miniscule space outside the bathroom, because the light is best here; there’s a full-length mirror and my sister can guide my ministrations. I have to be very careful not to poke either of us with the needle because the dress is white. I have never thought to sew anyone into anything; isn’t one of the main features of a garment to be able to take it off again? “How are you going to get back out of it?” I ask her, speaking around a pin held in my mouth. She takes a drag off her cigarette and squints backwards at me in the mirror. “Worry about that later. What’s important is to look good now.” A short while after, she and the boyfriend will depart and leave me with the rest of the pack of cigarettes, which I will chain-smoke in front of the same mirror, practicing to get it right.

My first master’s degree was a catastrophe. I was living in a typical college-town hovel, racking up student loan debt, mired in the petty in-fighting among the department’s many factions. Yet, miserable though I had been, when I finished my coursework and moved away, I nevertheless contemplated applying for the PhD — hadn’t I already invested two years and quite a sum of money in my education? Wouldn’t it be a mistake to give up now? Or was I simply a glutton for otherwise avoidable punishment? Didn’t I want to be a professor? What would I do with myself if I wasn’t an academic? This uneasy seesawing left me anxious and strained as the application deadlines drew nearer. My future father-in-law came for a visit and told my boyfriend, “She’s wound so tight she squeaks.”

In the midst of this agitation, the boyfriend gave me a sewing machine for my birthday, and I started sewing again. At first, I made simple things like curtains, then some cotton A-line skirts, and an abortive attempt at a rolled-collar wool coat from an inexplicably difficult German pattern. I took up quiltmaking, spending hours cutting cloth and piecing it together into intricate, sharp-cornered forms. The machine was basic, but it was sturdy. I made a space for stacks of fabric, and also for myself. I collected a small arsenal of tools. My sewing calluses came back. The application deadlines passed. I never regretted it.