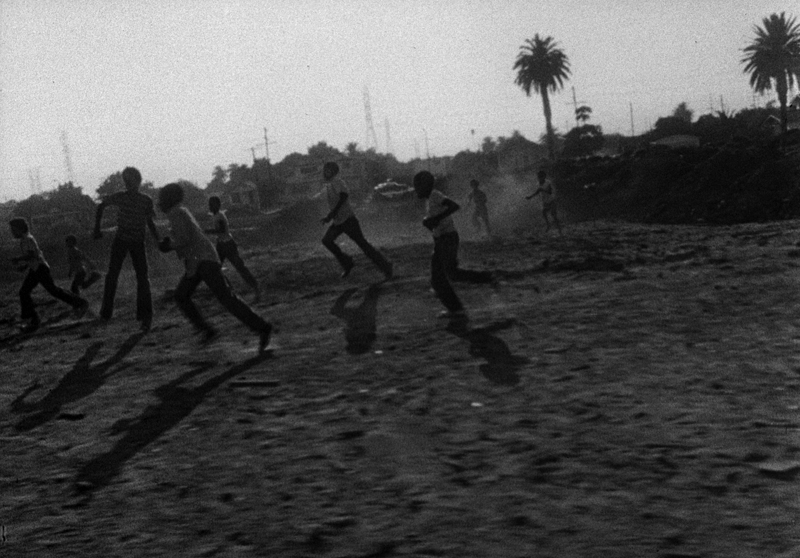 From Charles Burnett’s Killer of Sheep, 1977.

There’s a scene I like early on in Charles Burnett’s 1977 film Killer of Sheep: a tracking shot that situates us in a dirt field. It’s a barren area in South Los Angeles, over a decade after the Watts Rebellion. Burnett’s camera transforms the field at the edge of a neighborhood into an alien post-industrial dystopia. Dirt mounds dot the foreground; in the background, utility poles, transmission towers, and a couple of palm trees loom mournfully over the landscape, like sentries guarding the perimeter of an open air prison. It is unclear how or why we are moving; still, we travel speedily, tourists beating a hasty retreat through a seedy neighborhood.

Suddenly, emboldened by our retreat, lanky forms charge over the mounds. It takes a few seconds to orient yourself amid the kinetic frenzy Burnett has orchestrated — the moving camera, the running figures, the clouds of dust their feet kick up, the projectiles they’re throwing — and recognize that we’re watching boys at play. Eventually the camera settles behind their heads and we see that they’re hurling rocks at a passing train, perhaps on its way from the port to parts unknown. The slow motion post-industrial catastrophe that is South Los Angeles has become a playground.

Los Angeles is the nation’s second largest city and a hub for global culture, but it is notoriously bereft of infrastructure necessary to foster a pedestrian culture similar to those of other major metropolises like New York and London. One of Killer of Sheep’s signal achievements is its demonstration that the absence of a recognizable pedestrian culture — marked by clearly delineated public spaces, public-facing storefronts, and accessible public transit — doesn’t mean the absence of any pedestrian culture. In moments like that train scene, Sheep speaks to the inventiveness of pedestrian life in Los Angeles, where residents have had to develop a culture of walking and public gathering suited to Southern California’s sprawl. It represents the ways that Angelenos — in particular, its poor residents of color — cultivate communal space in the interstices of environments that militate against the concept of interpersonal contact in a public arena. When we see the film’s characters leaping across rooftops, bartering in alleys, and biking along roadways reserved for cars, we’re witnessing the appropriation of private, domestic, and commercial spaces as sites for congregation and play. An organic pedestrian culture takes shape before our eyes. Killer of Sheep is an archive of cultural practices and survival strategies that remain obscure to outsiders: it makes us audience to a culture that would otherwise go unnoticed. 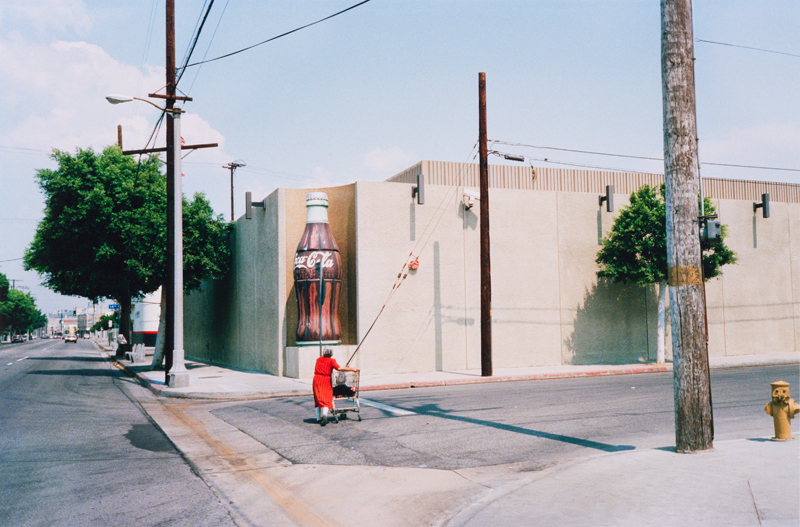 I became familiar with these spaces in the summer of 2011 when, after four years in New York, I returned home to South Los Angeles. I had neither a vehicle nor much money with which to purchase one. On most days, I commuted to my two jobs via foot and bus. This was in stark contrast to my adolescent experience in Los Angeles, the majority of which took place from the passenger seats of various cars. The city was something my friends and parents whisked me through on my way somewhere. Now, I walked twenty minutes to a bus stop in South Los Angeles for the privilege of taking three buses to the other end of the city. I came to know the city from the perspective of a pedestrian.

To my delight, what I’d assumed to be static, moribund streets were teeming with a social life that had theretofore remained obscure to me. From my position as a pedestrian, spaces like parking lots and gas stations assumed outsized importance. They hosted taquerias that fed commuters waiting for buses at busy intersections, became the sites of impromptu bodegas, and served as meeting grounds for adolescents without park space to gather in. Colorful fruit stands — once a source of tension between Mexican and Central American immigrants and their Anglo and black neighbors — were by then ubiquitous on South, Central, and Eastside Los Angeles sidewalks, selling sliced fruit sprinkled with chili powder and lime. Mercifully, paleteros were omnipresent during the oddly warm fall. The city ushered me into a previously recondite constellation of pedestrian practitioners.

One fall evening, I sat in the back of an LA Metro bus as dusk descended. I was tired, traveling from my main job teaching at a middle school in Koreatown to a job at a literary magazine in the northeastern neighborhood of Atwater Village. This was a twenty-minute ride in good traffic; in the maelstrom of traffic that is Los Angeles rush hour, the twenty-minute commute stretched into an hour-long ordeal. It was no matter: I savored the opportunity my commute offered me to gawk as dusk swaddled the city in pink and orange light.

I reached my stop, got off the bus and meandered down a particularly desolate stretch of Glendale Boulevard, past a recycling center that the city had set up in a parking lot. The scene hadn’t ever piqued my interest, but that evening I saw something I’d failed to notice before: there was an open-air market set up out of sight, behind a shipping container. On one end a man worked swiftly behind a taco stand; on the other, two women sold bright purses and dresses. It struck me as a distinctly local example of public space and pedestrian culture in Los Angeles — tucked away from sight, only available on a need-to-know basis, and only to those who walk along streets few others ever would. 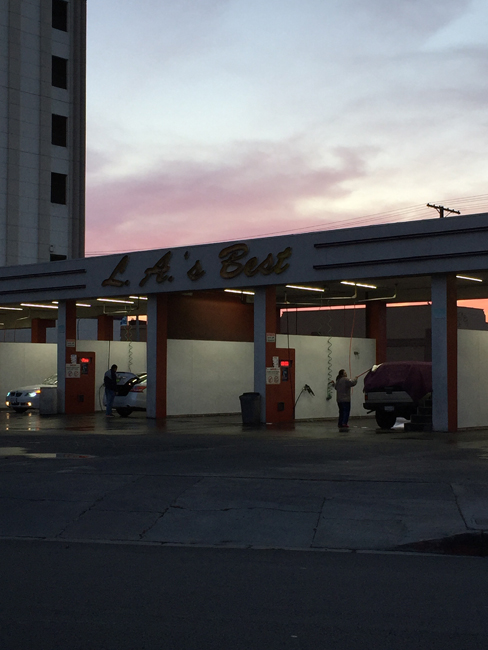 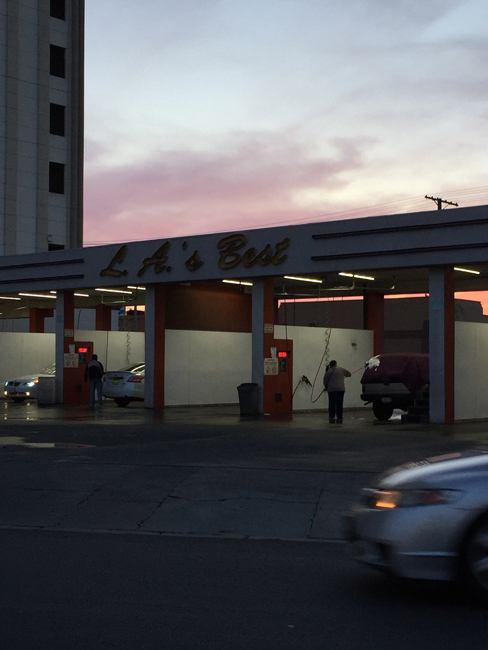 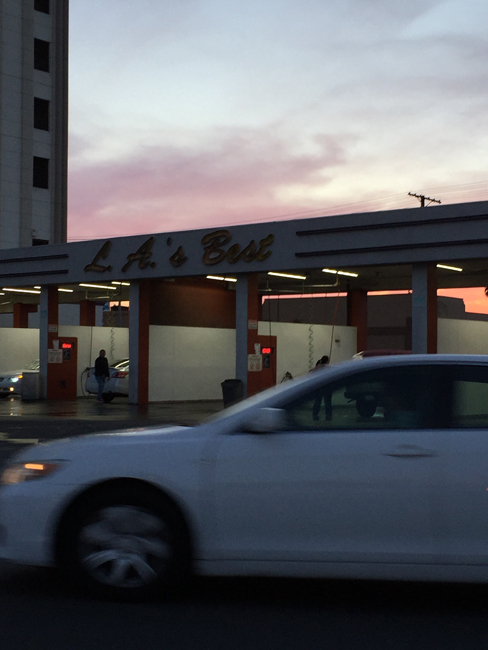 Discourse around Los Angeles’s pedestrian culture often proceeds as if the city has never given rise to such a complex engagement with the built environment. Rather than grapple with how residents use the spaces they have, discussions of the city’s pedestrian culture often hinge on the paucity of conventional public spaces like parks and plazas. Thus, to certain thinkers, Los Angeles is the very antithesis of a city, a sprawl of disjointed fiefdoms divvied up between property owners and real estate developers. Writing in Artforum in 1972, art critic Peter Plagens — at the time based in Los Angeles — bemoaned the city’s status as a collection of loosely connected, privately owned parcels that “has no urban form” to speak of. Writing over a decade later in City of Quartz, historian and native Angeleno Mike Davis argued that, though Los Angeles had once been “a demi-paradise of free beaches, luxurious parks, and ‘cruising strips,’ genuinely democratic space is all but extinct,” sacrificed to the owner class’s fanatical dedication to privatizing space. Los Angeles had become “Fortress LA.”

Today, the city finds itself at a moment when its current form — a low-density jumble of single-family residences, parking lots, artificial shopping villages, and freeways — is failing its residents. That form is a utopia for another time: as the city’s population increases and housing costs rise, the triple gospel of density, walkability, and public transit has come to the fore. City leaders have committed to major investments in new public infrastructure, while Mayor Eric Garcetti’s Great Streets Initiative seeks to transform major streets from car conveyors into walkable corridors of neighborhood commerce. Last year, residents voted to raise their own taxes in order to expand municipal transportation; the new train stations that are currently under construction are future sites of massive residential developments. Pedestrian culture has become less a concrete reality than an aspirational discourse, another episode of utopian fabulation in a city of optimistic boosters. In this light, “pedestrian life” becomes the sum of hopeful chatter and political maneuvering among leaders who want to turn Los Angeles into a dense metropolis accessible via foot, bike, and public transit.

While I broadly agree with these perspectives’ critiques of Los Angeles’s infrastructure, they share a flawed assumption: that public space and pedestrian life amount to urban elements imposed on and taken from the city’s hapless citizens by civic leaders, developers, and investors. Mike Davis’s Marxist histories depict a city shaped by powerful corporate interests and class conflict, but leave little room for citizens as social actors who also mold urban space. Similarly, the new infatuation with density wants to create a public, but sometimes forgets that citizens have engineered an already existing pedestrian culture. When paired with the threat of gentrification in minority neighborhoods like Leimert Park and Boyle Heights, attempts to impose New York-style density run the very likely risk of being disastrously heavy-handed, resulting in the disappearance of the kinds of obscure practices that flourish among the city’s minority populations. Los Angeles would be a less interesting — and even less equitable — city if organic pedestrian culture were suppressed in favor of an imported version. In trying to make the city more sustainable, Los Angeles’s leaders might be flirting with erasure of the kind that turned the working class community at Bunker Hill into a historical footnote.

We already have some idea of what that erasure might look like. Though the City Council’s stance on street vendors softened after Donald Trump’s election, the city’s historically antagonistic relationship to Latinx vendors demonstrates how hostile Los Angeles’s wealthier citizens can be towards working class street life. In Venice Beach, a decade of gentrification and tech industry encroachment into the once bohemian neighborhood has triggered newly draconian enforcement of a thirty-year old law that bans overnight camping and loitering on the boardwalk. Newly affluent residents were drawn to Venice Beach precisely for its walkability. Now that they’ve moved into the neighborhood, they want to implement their version of pedestrian culture — characterized by public spaces in which homeless and poor people who lived in Venice Beach are no longer welcome. Venice is an example of how the newfound desire for pedestrian life is inseparable from value judgments about what constitutes the “pedestrian.” But an embrace of walkability and density shouldn’t exclude the city’s most vulnerable citizens. 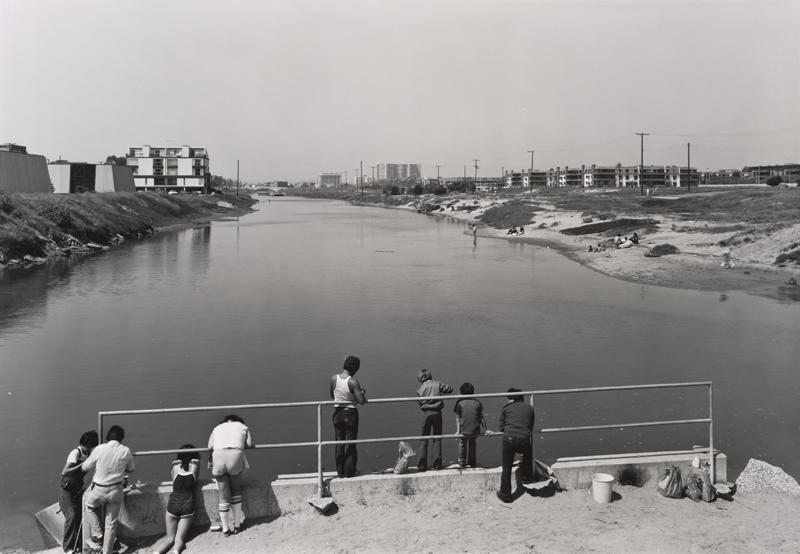 At the end of the ’90s, Berkeley professor of architecture Margaret Crawford, with John Chase and John Kaliski, coined the concepts “Everyday Urbanism” and “Everyday Spaces,” modes of thinking about urban space as constituted by the quotidian activities that ordinary people undertake in “a diffuse landscape of banal, repetitive and ‘non-design’ locations.” I’m enamored of her approach because it pays attention to forms of pedestrian culture and public space that the rush towards densification might ignore. With Everyday Urbanism, the kinds of diffuse and obscure social activities that accrue in Los Angeles’s interstices become manifestations of an organic pedestrian culture rather than inscrutable practices we can dispense with.

This is enormously important. Los Angeles’s pedestrian culture does not always resemble the urban ideal. This does not mean that we shouldn’t grapple with what these practices have to teach us about how working class and minority citizens use the built environment, what those uses say about their particular needs, and how the city can meet those needs. In this sense, failing to properly label this culture as a form of pedestrian life is more than just a category failure. Nobody, the adage goes, walks in Los Angeles. Nobody, that is, except 12% of the city’s population. That’s nearly half a million people, most of whom are poor minorities living in the inner city. When people repeat that adage, it should be understood as an act of naming and subsequent dismissal. Nobody who matters walks in LA.

As a native of South Los Angeles — a region that, at nearly the size of San Francisco, is garnering increasing attention from developers and upwardly mobile professionals — I fear that the unconventional kinds of pedestrian life that Burnett chronicled in Killer of Sheep will be targeted for erasure via legal impositions and the pressures of the housing market. Will the practices that we’ve crafted for our survival be sufficiently “pedestrian”? I hope that, as Los Angeles prepares to transform itself once again, that category proves capacious enough to preserve and learn from the tactics that poor people of color have devised for their survival.