Todd Haynes: From the suburbs to the sublime 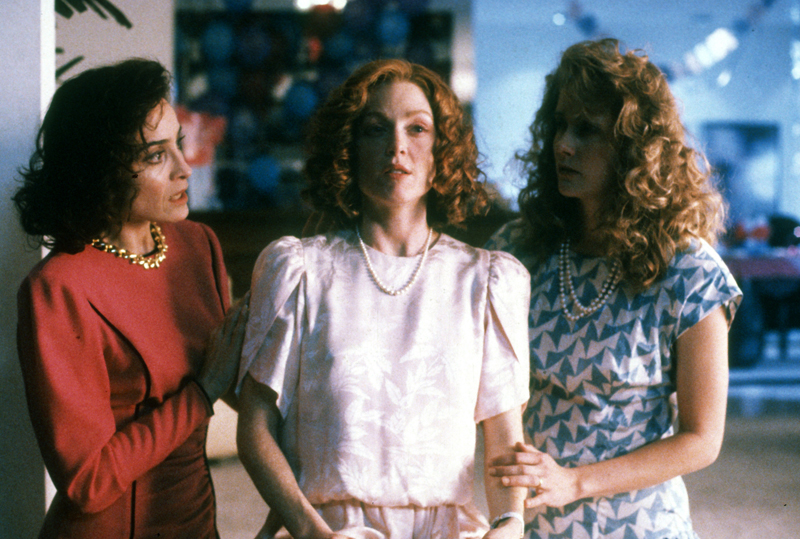 An appreciation through the lenses of place, time, and queerness

I’d always had an affinity for the films of Todd Haynes, but one night, back in 2015, I realized that the reasons might also be personal. That summer, Carol was building serious internet buzz, and I was procrastinating by reading the rapturous reviews of the film. Soon I found myself on the director’s Wikipedia page, which revealed his birthday: It was the exact same day and year as mine. (Heady, steady Capricorn, if that means anything to you.) I already knew, based on the setting of his still haunting film Safe (1995), that we both grew up in the San Fernando Valley: He in Encino, a slightly more upscale suburban town mere miles from Woodland Hills, where my family had a mid-century tract house. The wiki also noted that his mother is Jewish, adding another element to this intersection with me.

Certainly these are random coincidences, but ones that I found particularly exciting: I share some significant and specific perspectives with an artist whose work I admire immensely. I get where he’s coming from. I have consistently been interested in his intellectually inquisitive narratives of outsider status, of the queer, the “sick,” the genius, the charmed, and the maverick. His inspirations in other artists like Douglas Sirk, James M. Cain, Bob Dylan, and David Bowie are touchstones of our late boomer generation. His work, as Simran Hans writes in a piece on Haynes for the British Film Institute, “foregrounds sexualities that are transgressive, deviant, and disruptive.”

While there are brash characters in his films, his protagonists most often express their sense of difference with a smolder rather than a shout. Since this essay starts with early life, it’s interesting to begin with Steven Gale, the young boy character at the center of Dottie Gets Spanked (1993), who is hardly a rabble-rouser. His sense of transgression stems from his gentle his sensitivity and sissy-ness, which creates powerful tension in his household. I can relate. The boy’s portal to difference is media, a fixation on a fictitious TV comedienne, a Lucy-like female character one presumes Haynes related to in his formative years.

Learning that Haynes was literally from familiar territory from the beginning makes me consider his inspirations with more focus — in particular the aesthetics of place, of Southern California in the 1960s. Perhaps the future director sat in the same suburban movie theater that I did, enraptured by Saturday matinee cinema. Heck, we both might have been watching Hayley Mills in The Trouble with Angels at the same screening at the Corbin Theater on Ventura Boulevard. (Another internet factoid: actor Bryan Cranston retreated to that same theater, as his father had an office in the bowling alley next door.

For myself, a budding queer boy, movies were a primary escape from childhood alienation, a place to hide in the dark. I was thrilled by passing views of movies I was too young to see as we sped past drive-in theaters on the freeway back from grandma’s house (a particularly vivid memory was the 1970 trans tale, The Christine Jorgensen Story, a snippet of blonde visible off the 405). Maybe Haynes was also keenly aware of the film titles at the X-rated Pussycat Theater chain, another cinematic fascination on those Valley streets — there was one on Sherman Way, next to a topless bar called Batman A Go-Go. Behind those doors and fabulous marquees were the secrets of sex entwined with the trappings of film and television.

In a conversation on Marc Maron’s WTF Podcast, Haynes traces his penchant for film references to the age of three and the first movie he saw, Mary Poppins. He recalls that it “provoked a kind of intense obsessive creative reaction.” He admits to being seduced by the maternal figure of Julie Andrews, along with the spectacle of mixing live action, animation, and musical numbers. He had to reproduce it, act out scenes as play. “Psychosis set in,” he tells Maron.

I recall seeing Poppins at the Holiday Theater on Topanga. It must have been a re-release, though, as I distinctly recall the exterior as a drab, cinderblock box, a sort that was everywhere in the low-slung suburbia, next to a store selling glittering fake jewels that you could glue into prefab costume settings. They had things that looked similar to that sparkling green talisman that holds artistic magic in Velvet Goldmine (1998).

The allure of Hollywood was just over the hills, though the suburbs had the fanciful retreats of silent film stars. Tarzana was the name of the ranch owned by Edgar Rice Burroughs, whose ape man novels earned him the cash to purchase the land. Only a few of Haynes’s films are set in this California milieu — the legendary Superstar: The Karen Carpenter Story (1987) is set in Downey and the LA music scene; Safe could have been filmed in Tarzana in the 1980s when McMansions sprouted like monster weeds; and Mildred Pierce, the 2011 miniseries, invoked 1930s vintage LA. But Southern California doubled for everywhere and anywhere.

And so early films such as Poison (1991) and Dottie Gets Spanked tell their stories of outsiders (a trio within the entwined narratives of Poison, the budding gay boy in Dottie) in locations that may have been inspired by Haynes’s always-mentioned Rhode Island semiotics stint at Brown University. Stately brick buildings that are constructed as sets in California — they’re New York streets on the sunny, smoggy Paramount lot. While locations were almost certainly selected for practical reasons, there is something more meaningful about the fact that the Los Angeles of Mildred Pierce was filmed in New York towns that maintain an air of stucco deco, while the New York of Carol was played by Cincinnati, Ohio. The sites themselves are performing, usually in highly convincing ways. Things do sometimes align — scenes of 1970s New York City in his most recent film, Wonderstruck (2017), were actually filmed there.

Haynes’s narratives, so richly infused with meaningful details, can move slowly and seem chilled by intellectual imperatives. Yet invariably they are bubbling with ideas and bold moves. One of his most indelible scenes is in Safe, when Julianne Moore’s character hyperventilates at a baby shower yet tries to maintain her sense of propriety. It’s as though she is overwhelmed by the details in the spot-on pink balloon and maternity gift-wrap excesses of the set dressing and all the forced cheer it communicates.

This was before Haynes was directly quoting Douglas Sirk. That director’s films focus on conventional folks who are spurred to societal “deviance” through love and matters of the heart. Covert social critiques are folded into these conventional narratives — “women’s pictures,” a genre, if you can still call it that, which Haynes also has consistently mined. Sirk’s films were certainly TV staples in the 60s, though for Haynes’s and my generation they came alive intellectually when seen in the 1980s, in college film courses and rep houses. Rock Hudson, who starred in key Sirk films, revealed he had AIDS in 1985, charging the fictions of the movies with a frightening, poignant gravity, manifesting the idea that even the most artificial of cinematic approaches are infused with societal and emotional truths. 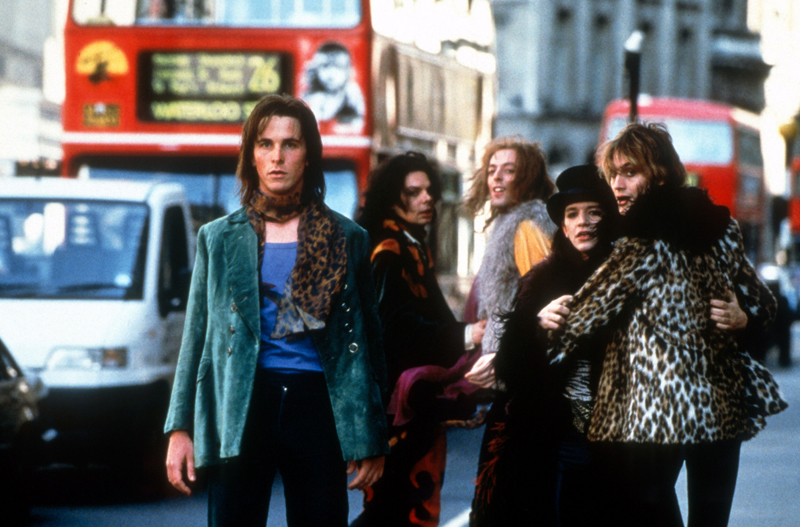 While there are so often political allusions in Haynes’s films, for me, they deeply resonate on the level of personal perspective and psychological make-up. I feel a particular affinity with Velvet Goldmine, which has scenes that feel directly lifted from my adolescent dreams and ennui. The film reflects my awkward teenage years even though it’s set in London, where all the amazing import albums came from. Back in the 1970s, I would imagine being in some British bedsit as I reclined on shag carpet, blasting my stereo in my air conditioned bedroom to avoid the arid San Fernando summer.

The film’s theatricality is charged with the visual and musical energy — not to mention the sexual ambiguity — of glam rock, with flights of fancy that channel Ken Russell acid trip excess. Haynes marshals his visual indulgences into a knowing homage to Citizen Kane and The Wizard of Oz. While the most visible characters are flashy and blessed with the aesthetic dandy spirit of Oscar Wilde, the core character is Christian Bale’s mild-mannered Arthur Stuart, a journalist who has entered the orbit of sexually fluid rock stars, who has soaked up their aura and transgressive spirit, but is ultimately more grounded in an analytical mindset. He is an observer who interprets and theorizes what these guys are up to, yet his introspective character brushes up against (and in a moment of abandon, has sex with) the more mercurial peacocks.

There is a scene in that film in which Arthur points to the television and, in fantasy, yells to his parents “That’s me!” directing attention to the dandified bisexual rock star on the screen. Here again is that version of self-expression, of identifying difference through media and constructed stories. (I felt something similar, if less urgent, during a scene in the museologically focused Wonderstruck, in which the young boy’s room features little display labels on all of his knick-knack treasures, something I also did as a child.)

It’s fascinating to consider Haynes as someone who emerged as a filmmaker in the early 1990s as part of the New Queer Cinema crew, and immediately registered as an important talent, at least to my demographic. That he is described by some observers as only recently hitting his stride as a mature artist, particularly with Carol, seems surprising — didn’t we already know his importance? Far From Heaven seemed to be a breakout film in 2002, though that was over a decade ago. Part of the appeal of his work is the slow, steady, and modest pace of his projects. He makes films that he believes in.

Carol was set in a similar time frame as Heaven, and has similarly brought Haynes to another level of artistic respect. I saw Carol twice, and each time I was struck by the way the entire film appeared to be constructed to support the concluding glances between the two main characters. All that artifice — the set dressing, the acting styles — in the service of creating a resonant emotional wallop. In the Maron interview, Haynes talks about how he made the film to explore what it means to be “young and in the dark and falling in love with someone.” It’s a situation where you read every sign and signal, as much an intellectual marker as the most urgent matter of the heart. His particular balance of head and heart is something he’s seemingly able to deploy with increasing effortlessness.