A few times a season, we like to reach out to a current or former Open Space contributor and find out what they’ve been up to. Mission: Comics & Art owner Leef Smith last published work here in 2015. 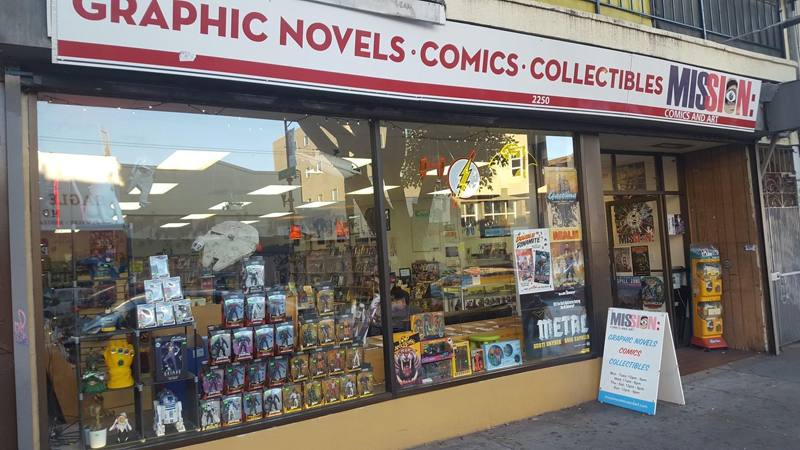 So, Leef, what have you been up to?

In 2015, I moved Mission: Comics and Art around the corner so that the store is now located on Mission Street proper. That was a big undertaking, but is great for the store’s future — it’s been nice being in a more prominent location and being noticed by more people. However, since the Presidential Election, things have been more challenging and the store’s retail sales have been down significantly. The first few months of the Trump regime were a big, depressing distraction that caused all sorts of worries for the future. So I’ve been focusing on “belt-tightening” and weathering this downturn.

In the past few years I’ve also felt the effects of the Mission’s hyper-gentrification and the absence of many of the artists and art supporters that used to live in the neighborhood. So while I’ve continued to host gallery shows focused on artwork inspired and influenced by comics, attendance has felt anemic in the last year or so.

Artist and organizer Shayna Yasuhara has been really impressing me recently. I became aware of her work through the Quick Draw sketch night she’s put on for over three years with co-curator Jason Furie. While so many things here tend to spark up and flare out, I’ve been inspired by their consistency, the open and inviting community they’ve built, and their frequent partnerships with other organizations. I also really liked her recent two-person show with frequent collaborator and fiancé Josh Herbolsheimer at The Galallery. She also organized a collage workshop in conjunction with the show; it was so popular that the space overflowed with attendees, up the stairs and into adjacent space as well. Then there’s the stop-motion video work she and Josh have also been collaborating on, including a music video for local band The Tambo Rays.

In your Impermanent Collection post on Form:uLA Dimension Laboratories and the Batman franchise, you write about how a single character can possess many potential personalities or be interpreted openly, consequently functioning as a “hybrid model.” Have you found any other correspondences between a character (in comics or otherwise) and recent developments in technology or art? Or an artist or figure whose work seems open to this multiplicity?

I’ve noticed more possibilities of the “hybrid model” in the emergence of different forms of VR artwork. Some of the sculptural environments I’ve seen similarly convey a form where limits are only suggestions. I found local artist Ric Carrasquillo’s First Tuesday very compelling in its exploration of a gallery space filled with cartoon patrons all created with virtual brushstrokes. VR environments like this blend ideas of fiction and reality, and show the potential for exciting new visual storytelling techniques that have the emotional impact of painting and cartooning, the visual language of comics and the way they direct a reader’s eyes through a page’s panels, and the immediacy of film. 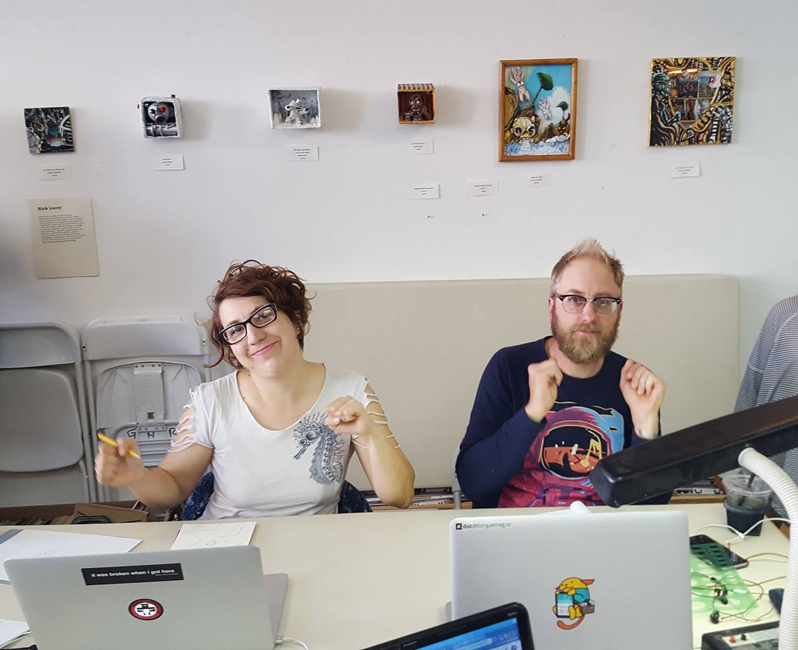 On October 7, Mission: Comics and Ar hosted 24-Hour Comics Day, at which artists try to complete a twenty-four page comic in twenty-four hours. It always amazing to have all that creative energy concentrated in the store for a single day. Muralist Sirron Norris will also be doing a new mural on the store’s roll-down.

In November we’ll be participating in Local Comic Shop Day®, a three-year old annual event celebrating local, independently-owned comic book stores. Then it’s into the busy Holiday season, with, I hope, more of this year’s malaise burning away!

Everyone should read this year’s standout book, My Favorite Thing is Monsters by Chicago-based artist Emil Ferris! It’s a semi-autobiographical story set in Chicago’s Uptown in the late ’60s. The ten year-old protagonist, Karen Reyes, feels like an outsider and a monster, and Ferris draws her as a werewolf. Karen imagines herself as a gumshoe investigating the murder of her upstairs neighbor, a Holocaust survivor with a mysterious past. Emil’s own story is quite amazing too: After becoming partially paralyzed by the West Nile Virus at forty, she had to re-teach herself how to draw, and then published her first graphic novel after working on it for six years!