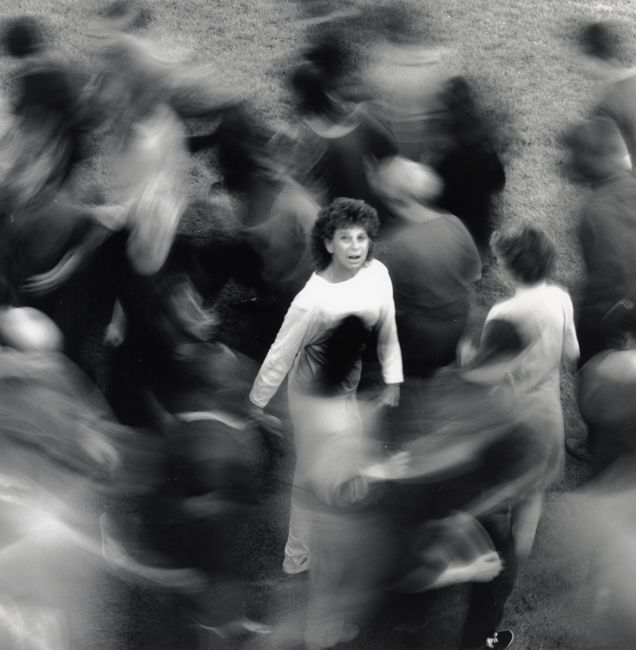 Anna Halprin surrounded by dancers during a performance of Circle the Earth, circa 1980s. Anna Halprin Papers, The Elyse Eng Dance Collection, Museum of Performance + Design.

What’s one myth about her work that Bay Area dance pioneer Anna Halprin would like to dispel? Recalling that New York critics used to tease her for being “touchy-feely,” Halprin answers, “I would like to dismiss the idea that I do therapy. I don’t.” I am sitting with Halprin on her legendary Mount Tamalpais dance deck, on the last day of a week-long workshop she led this summer with guest teachers Daria Halprin, Dohee Lee, and Jahan Khalighi. Offered through the Tamalpa Institute (which Halprin cofounded with her daughter Daria in 1978), the workshop reflects Tamalpa’s expressive and healing arts curriculum: somatic and sensory awareness activities and creative self-inquiry through visual arts, narrative, and movement.

What distinguishes her works from therapy, Halprin reflects, is their value as art experiences that reinvent the forms and functions of dance. Over the course of nearly eight decades, Halprin’s artistic and pedagogical practice has established key concerns of American postmodern and contemporary dance. Sourcing movement from everyday tasks, chance, and improvisation and using scores as her primary compositional frame, Halprin has mined the social and spatial potential for shifting dance beyond the concert stage and traditional choreographic constraints. The turn Halprin took from concert dance to works prioritizing ritual, healing, witness-participants, and community building has been codified via Tamalpa and the “Life/Art Process”: Halprin’s humanist approach to integrating emotional and psychological experience with creative expression. It is informed by her experiential anatomy training with Margaret H’Doubler, her work with Gestalt therapy cofounder Fritz Perls, and her resourcing of alternative healing practices and folk rituals in support of her recovery from cancer in the mid-1970s. 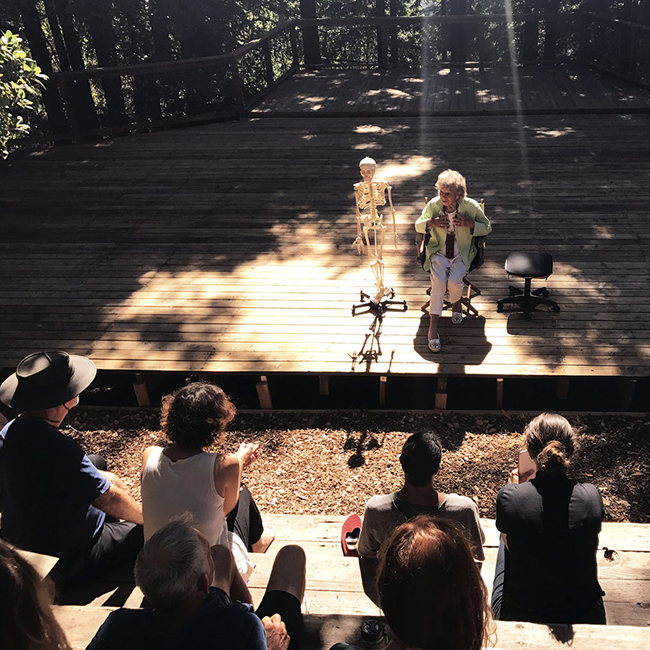 This week, at age ninety-seven, Halprin addresses the workshop group on her feet, her pelvis tucked and her hand curled in imitation of a Michael Jackson crotch grab: “Michael Jackson was using his sacrum when he did this move!” She settles into a director’s chair to survey the thirty of us on hands and knees, flexing our spines through “cat” and “cow,” and points out individuals for whom her assistant should offer adjustments: “She’s letting go of her lumbar region, but not the thoracic region”; “Help her get her butt down.” The group ranges widely in experience, ability, and practice — visual artists, professional dancers, 5Rhythms practitioners, and educators with training in arts therapy and massage. I am one of a handful of non-white participants; a large percentage of the group are travelers from Northern Europe. Over the course of the week, we form a temporary community of co-practitioners of Halprin’s Life/Art Process: sharing reflections on each other’s Cray-Pas oil pastel drawings and movement improvisations, dancing together on the deck, and ending most days in a circle holding hands, acknowledging the vulnerability and generosity on offer. 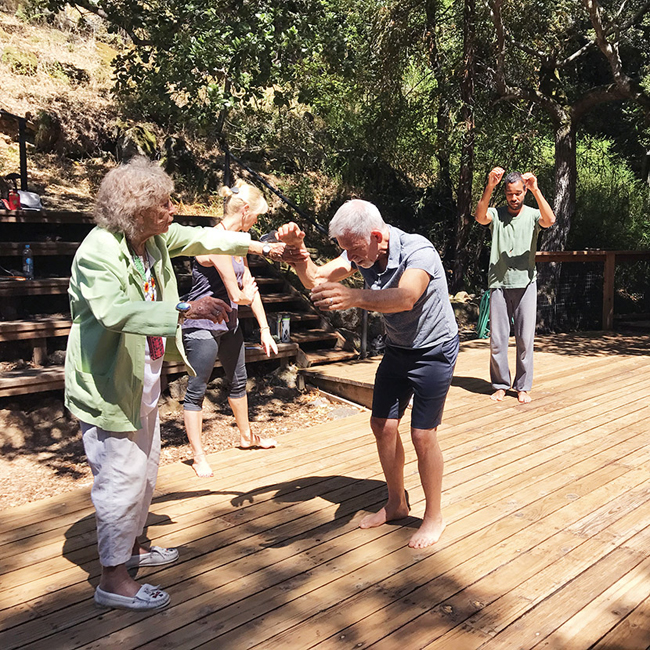 On the last day of the workshop, we enact a Food Score, which transforms a potluck lunch on the deck into a ceremonial occasion. We divide into three groups, each assigned a function: preparing the environment for our meal, plating the food, and designing an opening ritual. I join the group tasked with transforming the deck for our luncheon and with only twenty minutes to work, I suggest we use the rolls of white paper we’ve been given to create a triangular banquet area. One member of the group approves, citing Judy Chicago. Someone else, an architect, disagrees: What about a square for symmetry, since we’ve been working with dualities — men, women; earth, sky; passive, active? “I prefer to move away from binaries,” I counter, “and squares.” “I know,” he says. Another member announces that he’ll be the group’s director; “I don’t think so,” I say flatly. A few of us start rolling out paper to create the triangle’s perimeter; one of us is helping while listing all the reasons this is a bad idea. We’re working and debating, pausing to consider starting over, and time is running out. Someone from the Ritual group hurries over to stop us from scrapping the plan, as they’ve already begun designing their performance for our triangle. We recommit, the scene comes together, and a procession of food, dancers, and percussion inaugurates the lunch. 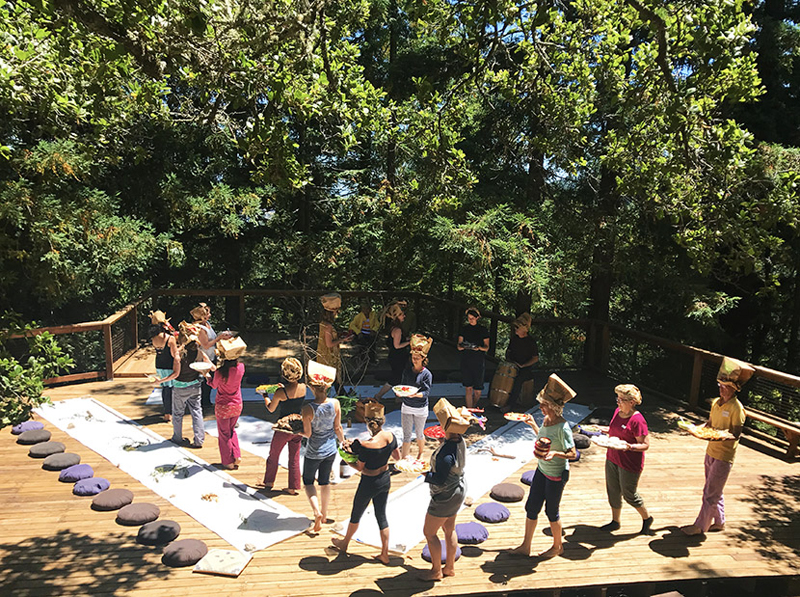 Ceremonial procession and performance of the Food Score, July 28, 2017. Photo by Sophia Wang.

After a week of gentle facilitation in body awareness, personal reflection, group cohesion, and suspended judgment, those minor conflicts are a welcome expression of the other conditions that undergird collectivity, and which had gone unexamined during our workshop: emergent and latent hierarchies, self-authorized leadership, lack of consensus. Tasked with self-organizing our Food Score, we encounter the messier process of collective creativity and the negotiations Halprin invites through her practice of “scoreography” as opposed to choreography. During lunch, Halprin and I discuss her work’s reception over time. What she hopes to be known for, she tells me, is her use of scores to create dances in a way that is “inclusive rather than hierarchical” and “more in line with our sensibilities about community and democracy.”

When I compare collaborative creation in the arts to horizontal organizing or democratic governance, I look to the facilitator’s role and resources as pressure points: what financial, social, and cultural resources enable these structures, and what forms of distribution (of authorship, for instance) are possible or impossible, given these conditions? Halprin’s biographer Janice Ross emphasizes the genuine, critical standards and expectations Halprin asserts in facilitating her participatory works, which counterbalance the rhetoric of inclusivity and collectivity surrounding many of them. Planetary Dance, Halprin’s most widely presented participatory work, operates at this tension point between individual expression and assimilation into a collective (or singular) body. Halprin’s critical assessment of performers in a Planetary Dance presented near the Muir Woods in 2000 entailed waiting for their “self-expression to burn off” so that the group could seize the “rare opportunity to express ourselves as one person” and to “become one body as Native people do [through dance].” 1

Critical studies of the collective creative process Halprin practices through scoreography, as well as the RSVP Cycles (integral to Halprin’s pedagogical approach and developed with her husband and creative partner Lawrence Halprin), have compared ideals of democratic and participatory pluralism against outcomes of authorial control and appropriation. 2 In the case of borrowing values and forms from cultural and ethnic collectives, as with Halprin’s citation of Native American rituals, the encroachments of humanist, inclusionary projects are evident. Following an afternoon session in which Lee leads the group through a breathing, vocalization, movement, and drumming score with a set of Korean drums, one of the workshop participants exuberantly shares how “primitive and tribal” the session had been. I am not surprised at the response, despite Lee’s nuanced presentation of the material. That week, both Anna and Daria hold up Native dance practices as ritual forms in close proximity to the “origins” of dance — a familiar, primitivist framing of non-white, non-western cultures. So Lee’s drums, a resource she introduces with the prompt that we each reflect on our own roots, get folded by association into the category of the ancient and the tribal. 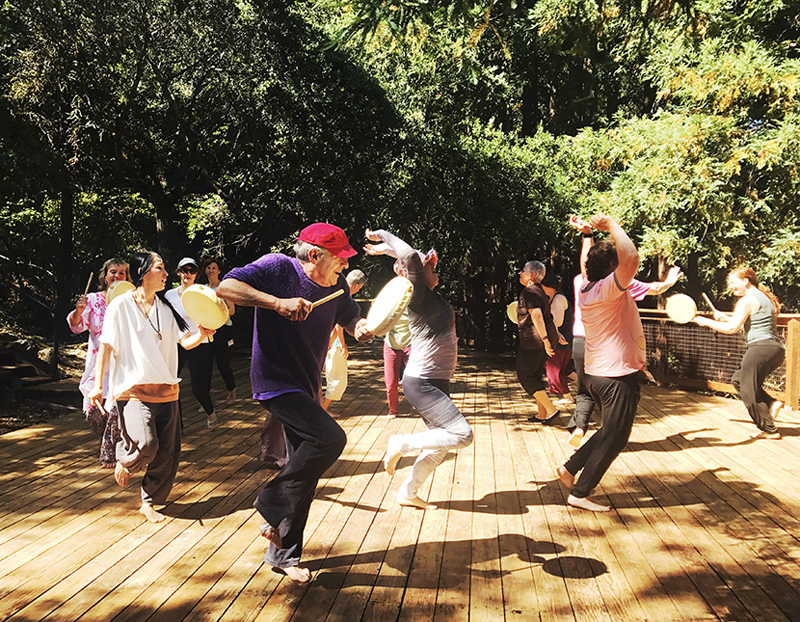 I was terribly aware of being on the edge of the ocean. I was terribly aware of the mountains around Mount Tamalpais. The hillsides of Marin County, the foliage, the redwoods. It was just incredible. I can’t remember any other place as beautiful in its natural environment. What I found also was the incompleteness of San Francisco, that it had a feeling like a forest with young seedlings growing up in the underbrush and that there was lots of change about to happen. San Francisco just seemed ripe for growth. Ripe for opportunity.

One afternoon, we stopped our exercises to watch a family of deer cross a path beneath the dance deck. Whispering, we counted the four deer below us. A red shouldered hawk flew between the trees shading the deck, and Halprin listed the different animals that are native to Mount Tamalpais and which she has seen in this backyard over time: foxes, bobcats, mountain lions, coyotes, owls. Once, a bat flew into her indoor studio. A theme of the workshop is letting the environment influence us: to “become earth” and “become sky” as we practice grounding and lifting our centers of gravity. Anna and Lawrence Halprin moved to San Francisco from New York in 1945, seeking California’s “wild open spaces” 4 in which to realize their cultural and aesthetic projects. Anna would craft a distinct movement approach and genealogy that has become synonymous with “West Coast dance,” and Lawrence would design national icons of postwar urban development and renewal programs. The exploratory spirit with which they built their respective bodies of work engages both fantasies and specificities of California, including its formation through successive waves of settler-colonialism: the furthest expression of marrying environment with influence, of transforming site into resource.

Towards the end of the week, we take a sensory walk: eyes closed, hand-in-hand, single-file through the redwood slope behind the deck. We arrive at the secluded Mountain Home that Lawrence designed for the Halprins, “to use the site to the fullest capacity; to put on the land what would enhance it, and in that way to enrich the living environment of my family.” 5 The home and its deck are as much an agent in this local history of the American avant-garde as the icons of dance, music, and literature who have performed and worked here: Simone Forti, La Monte Young, Richard Brautigan, Ruth Beckford, Merce Cunningham, Min Tanaka, Eiko & Koma. Including our workshop group and the long history of artists who have danced and worked here, this deck has served a diversely stratified community of people that reflects Halprin’s lifelong investment in cultivating participants, rather than audiences, for her work.

Halprin’s legacy might best be measured by the communities to whom she has increasingly addressed her work since her shift away from concert dance: artists and educators. For those communities, she has modeled a score- and experience-based approach to creative expression: in recent decades, through leading participation and performance occasions designed specifically to engage survivors of violence, individuals struggling with illness and chronic disease, and the elderly. Yet Lee and Khlaligi had recently returned from leading over 100 international participants in the Planetary Dance at the opening of the Venice Biennale. That Halprin’s work engages international art audiences as well as community-based arts practitioners speaks to the endurance and portability of her scores as both works of and tools for art. Ambassadors and educators of Halprin’s process carry forward her work of engaging witnesses as participants, and inciting collective imagination of mutual empowerment, care, and activism.

We end the workshop week by performing the “Earth Run,” a central component of the Planetary Dance. “Earth Run” invites participants to walk or run in a set of three concentric circles, accompanied by live drumming, and to dedicate their participation towards visualizing the healing of both personal and more widely shared struggles. As our workshop group embarks on our own “Earth Run,” we each declare for whom or what issue we are running. Some name individuals in their lives; others name specific social injustices or ecological crises. I experiment with naming the issue that has most recently brought me into the streets for collective protest: police violence targeting Black Americans. As I run in circles with the group on the deck, I weigh the strength of my dedication against the reality I have named; I consider the role that prayer and ritual play in motivating mass actions; I measure the elusive peace we’ve been asked to imagine against the real and remote sanctuary Halprin’s deck provides those fortunate enough to be here. The divide built into Halprin’s Life/Art Practice asserts itself. As she told us earlier that week, dance, unlike therapy, is not about solving problems; it’s about stirring things up, and letting what rises find expression.