< Issue – 6 : Standard Candle
Standard Candle
Issue – 6
Edited by Gordon Faylor + Claudia La Rocco
In astronomy, a standard candle is an object with a known brightness used to gauge the brightness of another, more distant object. As consumer technology becomes ever more compact and ubiquitous, we mediate ourselves and others in increasingly complex and combustible ways. How then to represent the interplay of self, machine, audience? Or the distance between relations, between frames, between present and past? What does it mean for future explorations when the nearest brightness is right at hand?

Note: All videos and photos were shot using an iPhone6.

I would love to live in this abandoned building in Lucca. Behind the walled park, above a noisy canal of rushing water. Sonic waves. I’d make my home look so good. I’d buy the whole building, live alone in it. Turn the rest into a bar, cinema, library. Just for friends and colleagues. A secret password would be required for entrance, like a bar I once went to in Prague. A little window slot at the top of the door opened furtively and they asked us for the “word.” That night, I randomly ran into the Turkish/Czech boy I had a crush on, an incredibly talented musician whose record I loved. Turned out he had a crush on me too. One of those: earlier that summer we both saw each other and stared the entire weekend at a small music festival in a medieval monastery/artist residency in Brno until he came up to talk to me by a bonfire where I was sitting while he was looking at me from afar. Gave me his number. He wrote it down in bad handwriting on the last page of my diary, in the place where I pointed my finger. Martin + phone number. He lived in Prague. I never called. Too shy. Weeks later a girlfriend and I were seeing an avant-garde circus performance in an outside tent in Letná, the main park in Prague. It was night time. For some reason, I got up at one point and went outside to smoke in the middle of the show. It started thundering and raining, and there he was, just standing there under gold-leaf trees. I couldn’t believe it. My romantic encounters have always felt fated (Juno in the 12th). Later that night, at the secret-password-bar, which was just a house with many rooms and home furniture, when we finally kissed, it was such a disappointment despite how passionately we’d started the moment we stepped out of the bar, onto the street. A terrible kisser and a cad. A run of the mill seducer. Bad lines. Wanted me in bed right away, sloppy. I knew instantly from the kiss that I was no longer interested. I probably knew even before that, at the bar. His eyes were all wrong. I left his bed. He couldn’t believe it. That we weren’t going to have sex. That I was leaving. Just walking out. I was 20. It was an early lesson on the lie of beauty. I thought he would be as incredible and special as his face. I felt sure of it. But few people are. Embodied.

New songs in old places. Old feelings in old songs. This song: the different male/female accounts of the same narrative of loss, a ballad of heartbreak. The woman gets the worst (as in most emotionally obtuse, insensitive) lyric: “You said that you could let it go.” She gets the dick-line. The guy is the girl. It’s an interesting use of the typically female testimonial. A manipulative, inaccurate inversion. Because the guy gets all the raw expression, emotional attachment, genuine pain. The girl, the guy in this song, is like: “What’s the problem, dude? You said you’d be cool.” I wish we would stop gendering heartbreak. Pretending it belongs to one gender only, and not the other(s). The binarization of affect. Loss. We perform the loss narrative we are culturally scripted to perform. It fucks up the way we hear everything. The way we say everything. The way we feel everything. The womanizer versus the femme fatale. What’s in the middle; the middle that everyone feels? The track was a great and jarring score for the peaceful scene of Janiculum — the tallest hill in Rome; the city has seven. Janiculum is outside the ancient city so not counted as one of the seven. The song is also an example of Freud’s “Mourning and Melancholia” — two different kinds of responses to loss. The song (not the dance version), which appeared in Love Dog (the book), always resonates. “Now you’re just a stranger that I used to know.” That feeling (about you) is back with me the past week. It is coming in really strong, really loud. Too loud. Sort of like this serene view I recorded and the song pulsing around it from the coffee stand. I keep asking why. Sometimes it goes away for a long time, and I think it’s done for good. I still don’t understand. Without that — understanding — nothing ever really gets resolved. It’s yanked back. Stranded affectively. “You treat me like a stranger and that feels so rough.” 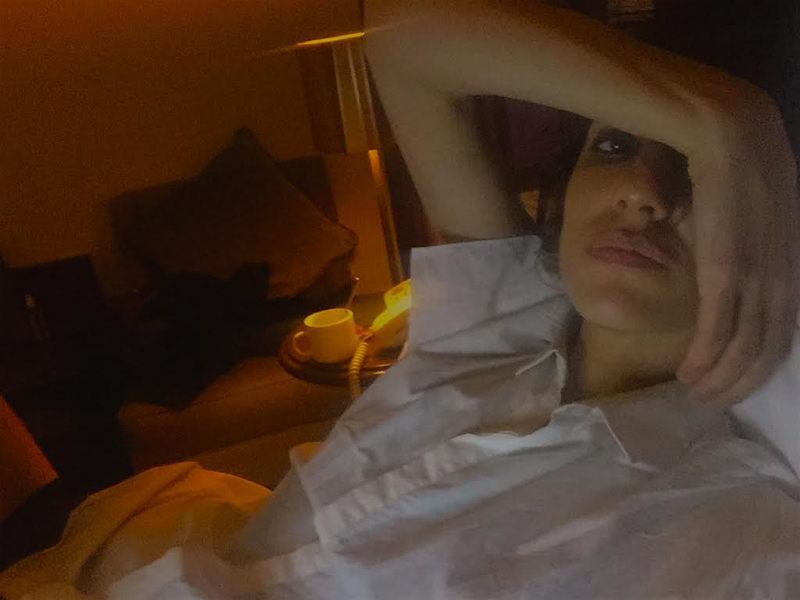 At night, all of Rome is lit like my hotel room in this photo. Like it’s not now, it’s then. 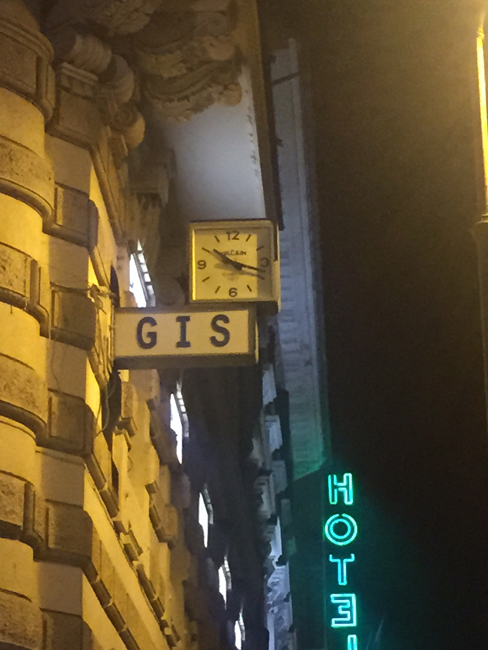 Outside my hotel window. So 1970s. It’s not Rome now, it’s Rome then, when my parents were living here for three months after they emigrated from Moscow in 1975. A stopover for a visa to America. New York hasn’t looked this nocturnal or colorful since the neon Taxi Driver. Maybe I’m stuck there, even though I wasn’t even around. The yellow. The green. The red. The department-store style street clock telling a time that doesn’t exist anymore. A time that is still material. Countable. Liveable. I think of Pasolini walking around in sunglasses. He was always night.

Vertigo, the 8th House film. Bright and full of death.
The maze of obsession winding and steep. A West Coast city of hills, dead rings of an ancient tree trunk, the “portals of the past.”
The huge rock of male fantasy, making us — women — easy to split.
Vertigo: as what was and never will be real.

Madeline: “Only one is a wanderer. Two together are always going somewhere.”
Madeline: “Knowing I have to die.”
Judy: “Forget the other and forget the past.”
Scottie: “I want to stop being haunted.”

Last January, in Germany, a young woman who came to my Love Sounds exhibition, danced with us at the after party we all went to. On the dance floor, she started chatting with me about New York. She’d also lived there, with her American aunt. We talked about the importance of taking care of yourself when you need to conserve energy. I’d told her I couldn’t stay out late or drink too much because of my early morning flight. It was during one of my cautious, paranoiac phases. The ones where I deprive myself of everything because I am too afraid to let anything in — or go. I told her about how I’d gotten very drunk the night before my flight to Germany and paid for it. Hungover on the plane. We talked about our problems with sleeping. A problem she said “she’s conquered.” She said, “You have stop being afraid of death. Then you’ll sleep.” She reminded me of me. Bright and full of death. She knew my fears. She had the same ones.  Only she was now on the other side. I wanted to go back to my hotel room. I am tired of looking and not finding.

Madeline, right before she kisses Scottie for the first time in front of crashing waves: “I don’t want to die.”

Imagine the sky is exploding. Slowly. Bright and full of death.

Freud said there are always at least four people for every two. Or is it six?

In Radical Love, Fanny Howe wrote: “Mourning teaches you to love without an object.” The passage is longer but I’ve whittled it down to that one sentence. A window into the rest. When I can’t sleep, I say the sentence out loud. When I’m in class, I remind my students. It’s a riddle I’ve only come to understand this year. A hole in the heart you don’t have to close or fill or fix in order to love. For example, what if there is no one? Ever again. Can you still love? In Italy, there are so many windows that don’t belong to anything. Portals that live alone. That you look not out of, but through. Now-then. Brand new TV light pouring out of something so defunct. Pink dusk, antiquity, mortar, ruin. Tourists come to look at these windows. Windows as holes in architectures that need no houses or attachments or tenants. Reminding us that whatever is left exists in and as a space that makes a window.