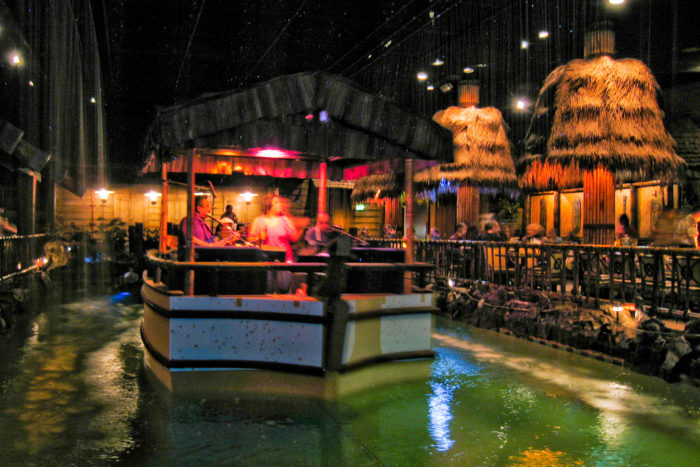 The Tonga Room in the Fairmont Hotel. Via Doug Letterman on Flickr.

At the tiny high school I attended in Honolulu, Hawai’i, it was customary for the graduating class to take a celebratory trip off the island. After much fundraising, my fifteen-student group flew to San Francisco for a week of mainland tourist-ing. On the last night, we visited one of the city’s historic cultural sites: The Tonga Room & Hurricane Bar. As we shuffled into the sprawling tiki-themed restaurant, we gawked and laughed at the ridiculous renditions of Pacific Islander life — the bamboo plants, thatch-roofed huts, rattan furniture, hanging canoes, and massive, illuminated pool featuring a band floating in a boat playing “tropical” tunes.

Taking us to the Tonga Room was a mysteriously surreal, and perhaps intuitively enlightened, decision on the part of our high school chaperones. That night, they implicitly ingrained in us a potent lesson about the mythologizing of the place where we grew up — one that could only really be learned on the mainland. And for those who, like me, moved to California for college mere months later, it would prove a useful primer for frequent questions about whether all pizza was topped with pineapple in Hawai’i, what it is was like to grow up in a grass shack, and why being born in Hawai’i didn’t make you Hawaiian.

After living in California for several years, I learned that the Bay Area has an unusually high number of tiki bars, and that the Tonga Room is among the most famous.  The storied establishment has been located in the basement of the Fairmont Hotel since 1945, when the owners hired MGM’s lead set designer to transform the hotel’s existing pool into a centerpiece for a full-blown immersive environment inspired — in a gaudy Western-colonial-male-gaze sort of way — by the South Pacific. Ever since, it’s been a luxurious, paradisiacal escape for businessmen who have a hankering for overpriced Asian fusion cuisine and a too-sweet cocktail but don’t quite have the capacity to make it to Waikiki for the weekend.

Throughout its seventy-year lifetime, the Tonga Room has mostly been adored by fun-loving citizens of the city. San Francisco Chronicle columnist Herb Caen was famously partial to the spot’s Mai Tai recipe, and locals were pleased when television food explorer Anthony Bourdain designated the restaurant “the greatest place in the history of the world” in a 2012 episode of his Travel Channel show. When the bar was slated to close in 2009 as part of a renovation to the hotel necessary to make way for new condos, upset San Franciscans successfully flooded the management with letters and petition signatures pleading that they not destroy such a local gem. Their rhetoric: What kind of bland, unimaginative place would San Francisco become without this mainstay of kitschy opulence that so perfectly encapsulated 1940s Americana? Without the watering hole, a piece of the city would be lost, erased, overwritten by a new, incoming culture, they claimed. What a tragedy that would have been.

Last year, director-turned-winemaker Francis Ford Coppola decided to open a Native American restaurant in Geyserville called Werowocomoco, named after the political capital of the Algonquian tribes. Twitter responded in uproar, and media outlets covered the ensuing debate about cultural appropriation in cuisine. But Coppola’s process included research around indigenous cooking, a vague claim of donating a percentage of profits to Native Americans, and a painted animal skin displayed across the wall of an otherwise typical modern restaurant — no tipis inside of which to eat. While those characteristics don’t validate the idea, they pale in comparison to the crass caricaturing of Polynesian culture that takes place in tiki bars. So why, then, does Werowocomoco get to be part of the conversation about cultural appropriation — of which Bay Area residents are typically well-versed — and not the Tonga Room? Why is it that my personal friends, the kind of progressive people who would condemn the thought of a non-native person opening a Native American restaurant, have no qualms with ordering a Lava Bowl at a tiki bar?

The most common answer relies on the logic that because Tiki Bars don’t feign authenticity, they don’t count as cultural appropriation. In his essay, “The Cultures of Tiki,” anthropology professor Scott Lukas cites tiki guides and interviews with tiki aficionados to conclude that tiki culture is a playful theater of inauthenticity in which the set pieces and performances are cultural samples being remixed into something mythical. Those invested in tiki culture are in it for a kitschy cultural fantasy — an imagined lifestyle associated with Jimmy Buffett and piña coladas garnished with tiny umbrellas. And, as Lukas argues, in the same vein as goth and punk, the tiki aesthetic challenges classist notions of “high” and “low” brow culture by celebrating something traditionally garish and distasteful. “The whole point of tiki, as I heard time and time again in many field observations,” he writes, “is to eschew the serious and the conventional and to delight in the campy and the controversial.”

But such a dismissal of the obvious appropriative roots of tiki culture requires a willful historical amnesia (the kind on which much of American identity is built). Such logic traces tiki bars only back to Don’s Beachcomber — the first ever tiki bar, opened in Los Angeles in 1933 — and glosses over the Polynesian origins of the imagery.  That murkiness is key for constructing the tiki style, rendering the entire South Pacific a platter of stereotypes and aesthetic tropes to choose from. It was also perfect for the 1940s, when tiki bars began flourishing all over the country because World War II had incited a frenzied but adamantly shallow fascination with the South Pacific as young American men deployed to the Pacific Theater returned with blurry visions of an exotic paradise.

So, if tiki bars don’t seem to count as cultural appropriation, it’s only because the concept has evolved past the popular understanding of what cultural appropriation looks like. In this after life of authenticity, that which was appropriated has been so wholly and continually devoured, regurgitated, then devoured again, that it appears to take on a character and culture of its own.

In March, a travel writer named Wells Tower wrote a piece for New York Times Magazine entitled “The Hawaii Cure” in which he reluctantly visits the islands for the first time — noting that only the state of American politics in 2017 could cause him enough stress to want to escape to somewhere so relentlessly friendly. Much of the piece is spent mocking the cheesiness of the “Chief’s Luau” he attends and the inauthentic theatrics of the cultural activities available to tourists. With the audacious privilege that only a professional travel writer knows, Tower attempts to situate himself as a kind of post-tourist who is too intellectual for typical enjoyment of nice things.

“The 50th state has always seemed to me a meretricious luxury product whose visitors bring happiness with them in the form of money,” Tower writes. “I am not constitutionally geared for paradise. I am not one for cocktails containing patio equipment, for lazing on talcum-soft sand, eyes gone to pinwheels, grinning madly at the sun.”

But in his apparent attempt to criticize Hawaii’s tourist industry, Tower — who never engages with any real form of Hawaiian culture on his trip — unwittingly draws more attention to ways in which Americans have come to consider such constructions of tourism to be the epitome of the Hawai’i experience. And in doing so, reminds us that such constructions do not merely exist adjacent to actual Hawaiian history, but rather actively work to erase it, replacing violent colonization with illusions of escape and hospitality.

When American tourists arrive on the shores of Hawai’i, what they often expect and experience is not a Hawai’i in all of its historical and cultural richness, but an immersive, theatrical set in which to perform the care-free island fantasy supported by tiki bars, appropriated uses of the word ‘aloha,’ and other constructed notions of paradise present in popular culture. In this real-life extension of fake tiki culture, too, amnesia is crucial. This set has no room for a backstory of illegal overthrow, exploitation, and cultural genocide.

In “‘Hawaiian at Heart’ and Other Fictions,” Lisa Kahaleole Hall relays how such renderings of Hawaiian culture directly undermine Hawaiian sovereignty struggles. “A culture without dignity cannot be conceived of as having sovereign rights, and the repeated marketing of kitsch Hawaiian-ness leads to non-Hawaiian’s misunderstanding and degradation of Hawaiian culture and history,” she writes. “Bombarded with such kitsch along with images of leisure and paradise, non-Hawaiians fail to take Hawaiian sovereignty seriously, and Hawaiian activism remains invisible to the mainstream.”

It’s no coincidence that tiki bars — one of American culture’s most enduring forms of escapism — conveniently erase the South Pacific’s history of colonization and explicitly place the consumer in the role of the explorer. Consider that next time you’re sipping a Mai Tai, sitting in the grand ship that protrudes into the center of the Tonga Room, and the artificial rain begins to pour into the pool, magically leaving the customers completely dry.

Editors’ Note 5/25/2017: This essay has been revised to reflect the following corrections: the first tiki bar, Don’s Beachcomber, opened in 1933, not 1907; and the American musician referenced is Jimmy Buffett not Jimmy Buffet.