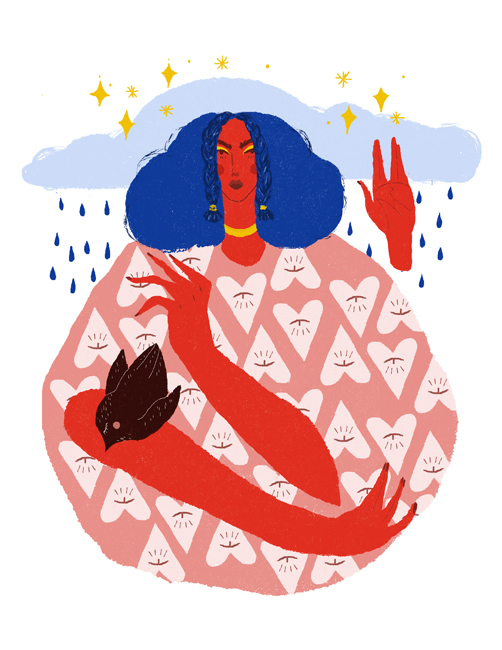 To live in the Black Diaspora is to live as a fiction — a creation of empires, and also self-creation. It is to be a being living inside and outside of herself.

Your mother always told you that you would leave this place. After she pulled you from her body, you stretched your arms toward the sky, ready to greet the celestial light.

When you were twelve years old, your entire class went to the Observatory, and you found out you were made of stardust. You learned that every atom in your entire body — the air in your lungs, and the dense iron in your blood — was formed inside a hot and burning star, long before the birth of Earth or Earth 2. Your body has never belonged to any terrestrial notion of a home.

The American author George Packer wrote: “No one can say when the unwinding began, when the coil that held Americans together in its secure and sometimes stifling grip first gave way.” We were born after the time of decay. There is nothing left for us here.

One hundred years ago, researchers at the Massachusetts Institute of Technology and Stanford, studying small photos, realized there was no way to create a singular chronology capable of describing how the tiny pieces of light changed over their lifetime. The existence of a particle in space is fractured — it exists along many alternate timelines, not just one. We must think about the past and present and future as “entangled histories,” the researchers said.

We were told to leave everything behind, including the holochips that store our international identification numbers and currency balances. You cannot anticipate what you will have forgotten when you arrive, or even expect that a slip of paper will survive the journey, but you make a list anyway. A list is a kind of a map, a series of connected items that will guide you to remember who you were when you wake up. It was silly to think anything can be taken, but it is even sillier to think that anything can be left behind.

The Merge began with palm-sized devices that grew thinner and slimmer until they could be implanted underneath the skin, and an entirely new interface was born, connecting humans and their computers. Descendants became more powerful than their ancestors’ wildest dreams. But consciousness was in danger, and the Cutting began. Society split into two opposing teams. Those who wanted to sever the connection with machines to advance humans and those who believed evolution would be impossible without you. Your mother didn’t belong to either, but she wanted you to be re-born among the stars.

When your year was drawn in the lottery for tickets aboard the last ships leaving the solar system, your mother cried, first with relief, then with deep sorrow. Your father hissed, “but what is the price of this freedom,” and for once in your lives, neither of you met his eyes.

At night, you lie awake and wonder: if we wake up in a completely different century, on a completely different side of the universe, will we wake up completely different kinds of humans, too? You learned in science class that the brain creates a simulation of consciousness like a conductor guides a symphony to create a sound: seamless, in unison. Because it will take untold hours to reach this new land, we will be put into an extended sleep as our bodies sail past gassy clouds of nebulae and distant galaxies, through the deep sea of space. In this suspended state, anyone observing your body would believe it to be dead.

Your new life will start as an afterlife…