Magic Electrical Tibet: Bruce Conner, Philip Whalen, and the State of the Union 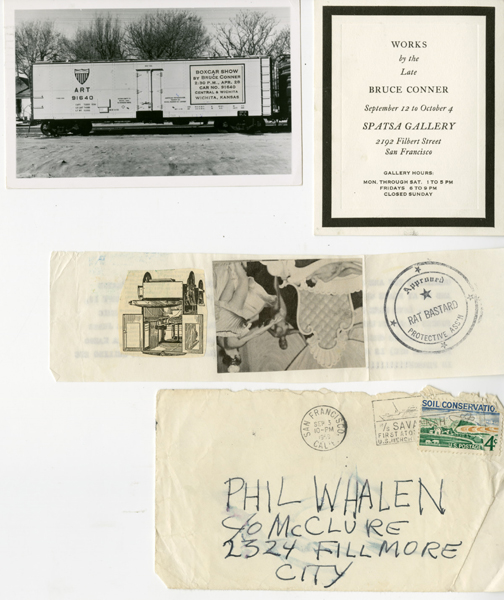 We complain of Tiberius in the White House.
But consider: Caligula
Waits fretfully in some provincial capital.

I met Dave many years ago, in the back of a car rocketing down the Trumansburg Road out toward some show or other and, as he recently reminded me, that was before 9/11. So we’ve been friends for a while. Dave is an artist and helped me realize what it meant to be an artist. He introduced me to the work of Tony Conrad and Robert Ryman and Albert Ayler, without whom I never could have written my book Holy Ghost. In Ithaca Dave painted flowers and abstracts and also did oilstick graffiti wherever he went. Street art is the essence of his practice, and now his work can be seen at Clarion Alley in San Francisco.

After Dave moved to Oakland he sent me a letter he wrote while sitting under a tree in the backyard of a co-op. In it he described, in loving detail, a burrito he’d just made. It made California sound so good, so I came. (Bruce Conner came from Kansas, and his friend the poet Philip Whalen from Oregon.) “O California, lar-de-dar,” says Phil. When I found some traces of this artistic friendship in the archives of the Reed College library, I was delighted. The materials reminded me of the folder I started to keep several years ago of ephemera related to Dave. Our friendships matter, is what I mean. 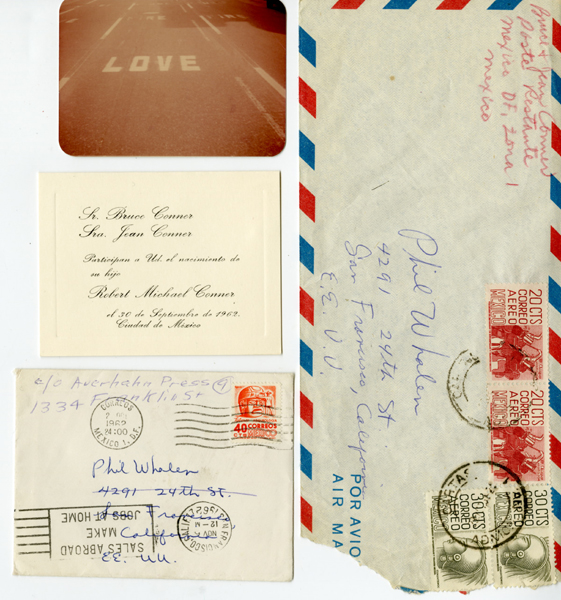 When Dave got in touch this January I suggested we go see the Bruce Conner show, and he was game. As he was locking up his bike by the Metreon I asked him about the Ghost Ship fire. He told me he had lost three friends and said it was like the 9/11 of artists.

This phrase stuck with me, which is why I’m passing it on to you. And since so many of are sitting waiting for the Reichstag fire it feels timely. Maybe it will have already happened by the time you read this. The bomb goes off in super slo-mo in Crossroads.

Invisibility and contempt are some of the prices you pay for persisting in the vocation of being an artist in this country. We respond by making families, relations, networks of correspondence out of our circumstance. And when it’s time to go we sell our stuff to our friends, or try to before just giving it away.

The threatened obliteration of the National Endowment of the Arts is almost lost among the hail of attacks in this new epoch, but it’s still emblematic. Diane di Prima writes, “The only war that matters is the war against the imagination — all other wars are subsumed in it,” and she’s right. 1 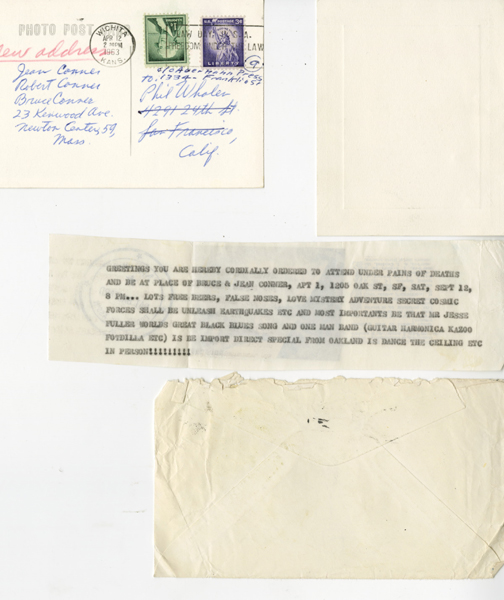 Every time I went to the Conner show I ran into artists I knew — painters, poets, you name it. Everyone knew it was important to go. Something in us refuses to die. How many people were sitting in that darkened room watching the slo-mo mushroom cloud and thinking, it’s 2017.

For decades Dave’s art and cultural work has been in the service of racial justice. Martyrs of the movement and victims of police brutality loom large and testify to the ongoing disaster of a nation founded on slavery, expropriation, and genocide. It’s especially painful now to reread the cutting and incisive lines from Whalen’s masterpiece, Scenes of Life at the Capital:

Almost all Americans aged 4 to 100
Have the spiritual natures of Chicago policemen.
Scratch an American and find a cop.  There is no
generation gap.

Whalen wrote this in Kyoto, where he was hiding out from the paranoia politics of the late ’60s and starting to deepen his study of Buddhism. (Later he became ordained as a Zen monk.) A similar perception of the signs of the times took Conner and his family to Mexico.

It seems like Whalen and Conner met through their mutual friendship with the printer Dave Haselwood, who ran the legendary Auerhahn Press. Whalen’s biographer describes “a monster procession down Grant St.” in San Francisco where Conner and Robert LaVigne, in costume, led a great crowd along with banners, floats, and decorations, to a benefit for the press, which was bringing out Whalen’s new book. That was in 1959. My impression is that things kind of sucked then too. 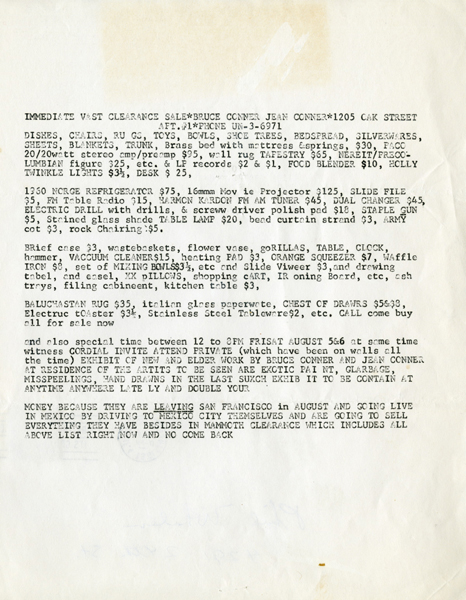 Dave and I stopped to look at the paint-by-numbers Last Supper that Conner made shortly after the assassination of JFK. By remarkable coincidence I have a painting made from the exact same kit, executed by my wife Sara’s uncle Richie long before he died of AIDS, hanging on the wall in my kitchen. It hung on the wall in Sara’s grandparents’ house all through her childhood. 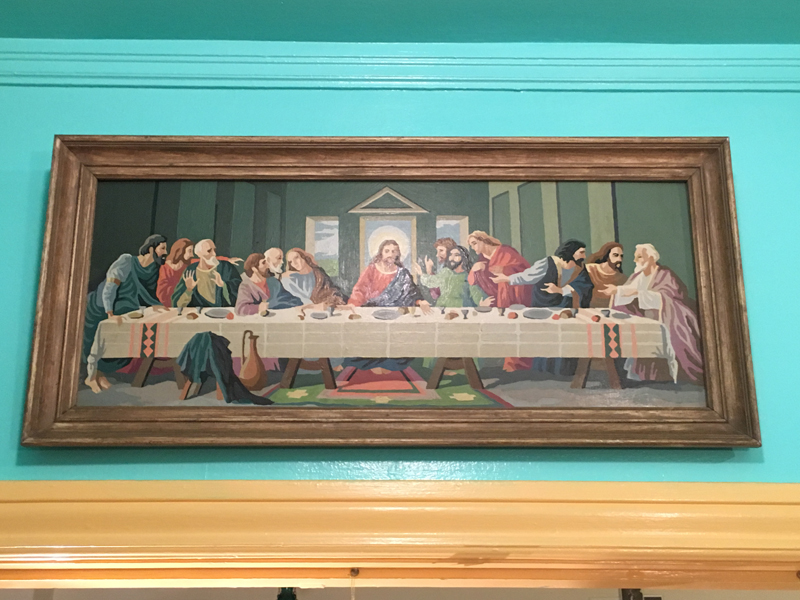 We talk about Reagan’s silence on AIDS, but what silences are we living through now?

The Gospel of Luke tells us Christ died under Tiberius; who’s gonna die under Caligula? 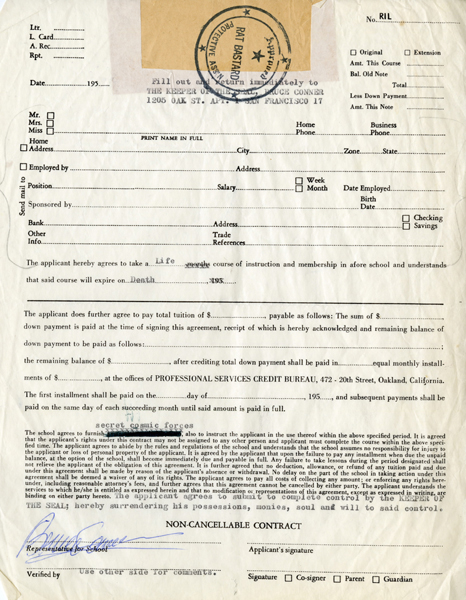 When I wrote to the Reed College archives to inquire about the Whalen-Conner correspondence, librarian Gay Walker replied that “within the 17 items […] not a single one is an actual written letter — though one accepts an invitation.  They are all change of address notices, a sale announcement, a flyer, that kind of thing.” But that’s what I wanted to see — how these two artists, in a milieu both bubbling and beleaguered, inspired by utopian hopes and haunted by political dread, knit together the necessary, fragile community of artists from the materials at hand. After all, that’s how they both made their art.

One of the documents Walker sent me is a classic Conner pataphysical contract, inviting the reader to sign in order to be furnished with “secret cosmic forces.”

Whalen didn’t sign his copy — but in Scenes of Life he does quote a kid saying, “I want America to be magic electrical Tibet!”

It’s not too late, if we’ll accept the invitation. Dave walked me down Clarion Alley and showed me what he’d been working on lately. 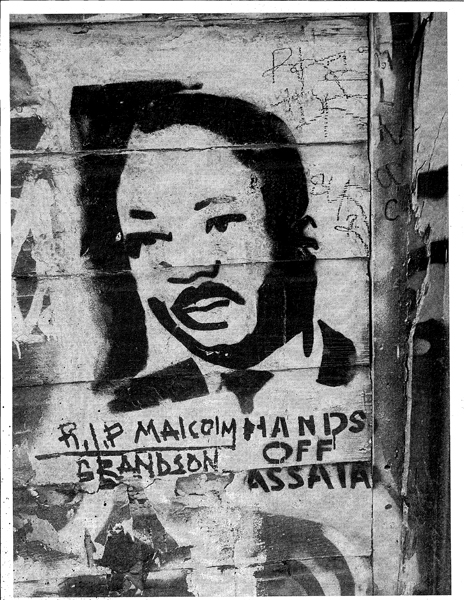