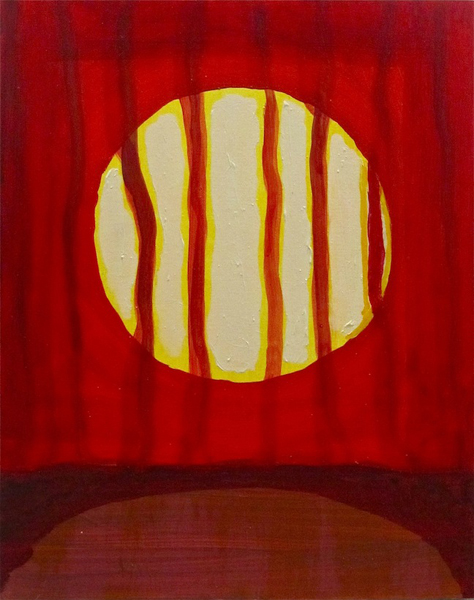 “Five minutes,” Asher calls out to me in the back.

I am standing alone behind the stage at Hauser Wirth & Schimmel in a large room that looks like an old warehouse. I’m about to perform Mr. Akita, a play written and directed by Asher Hartman. Asher and I met about three years ago after a play he had written and directed called Glass Bang. “You really must see this play, Cliff, I think you’d like it,” was all Mark Allen of Machine Project said to me about it. When Mark speaks, I listen; off we went.

My husband Scott and I rang the doorbell of a beautiful home in Potrero Hill. A very excited man opened the door. “OH HELLO! YOU MADE IT! I’M SO GLAD YOUR’E HERE!” he enthused, peeling off a nametag with the name “Winston” written in pen. He pressed the sticker on me and welcomed us in.

I had no idea what I walked into. There was a man lying on the floor of a fabulous living room. He later turned out to be a dog. Another man was lounging on a sofa. People were milling about, waiting for something to happen. When the play actually started I was looking out at the skyline of San Francisco. It sort of crept up on us, the viewers. It had been a while since I was absolutely perplexed about what was going on or what was going to happen next. The walls of audience and actors were disintegrating all around us, and we were in deep. Finally, something I couldn’t pin down! Towards the end of the play, in the back outside, a neighbor yells “shut the fuck up,” and I wonder if this is part of it.

I get the “two minutes” signal.

I’m going over the lines in my head like I have been the past few months. It’s getting easier and easier to do — going over the lines, again and again, going over and over the lines. A few years ago I didn’t think I could do this, I freaked out a bit when Asher told me he wrote a play for me.  All gratitude to Asher and my husband Scott for the encouragement and belief to do this; it has been one of the biggest challenges of my life. For me, the memorization of the text is the most difficult part — the acting thing comes somewhat easy. Asher is paying attention to every aspect of his play, a real details man; he knows exactly what to say to get something out of me. I love working with this guy and do not look forward to his sudden disappearance once the play has ended.

The room sounds like it’s filled up, I hear the volume of chatter and talk slowly silence. Asher gives his intro, I brace myself and get completely into it. I’m gonna walk out there and totally slay. Hopefully, I do.

Please forgive the plug. This isn’t supposed to be a space for self-promotion. But I have to tell you that I am doing this play again at BAMPFA next month. Maybe I’ll see you there.