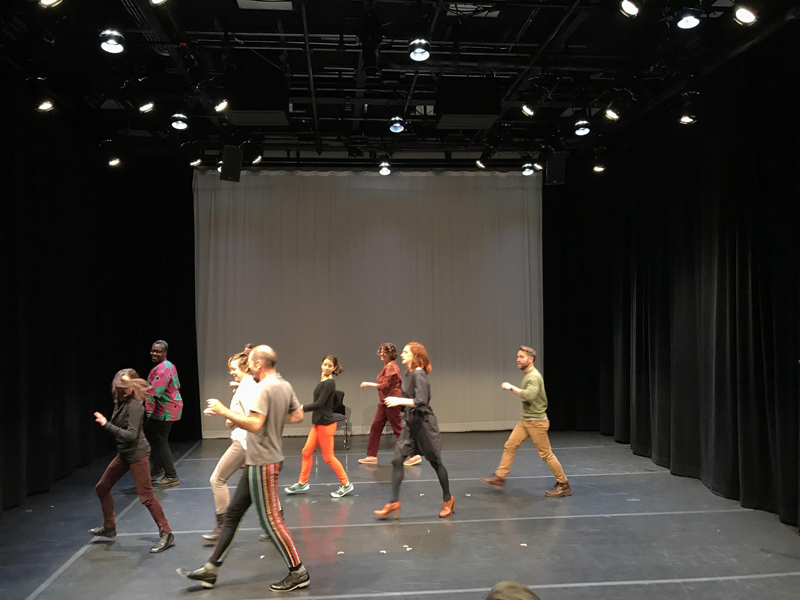 Keith Hennessy and members from the audience doing “The Hustle”.

On February 4th, 2017, Open Space presented an afternoon of conversations and performances at CounterPulse, as the culmination of this Lost and Found series. After my brief introduction, the day unfolded with Monique Jenkinson and Helen Shumaker in conversation; a performance lecture by Keith Hennessy; and a short presentation by Rhodessa Jones, who then joined a panel discussion with Annie Danger, Xandra Ibarra, and Brontez Purnell. That conversation spun out of the theater and into the streets, transforming into a SpiritualDiscoGrievingDanceRitual led by Amara Tabor-Smith and featuring Brontez Purnell and Marvin K. White. Among the audience members that day were Sampada Aranke, Kelly Lovemonster, and Margaret Tedesco, each of whom we asked to respond, however they wanted, to their experiences. –clr

Bay Area dancer and performance artist Keith Hennessy walked onto the CounterPulse stage and immediately invited audience members to join him in performing the ’70s disco dance “The Hustle”. As the iconic soundtrack played, I watched the group synchronize their movements and the dance quickly revealed itself to be more like a ritual.

Like Keith’s participatory gesture, Lost and Found: Bay Area Edition was a collective invocation. An intersectional, feminist cast of artists concentrated their energies in bringing forth and remembering the spirits of artists lost to HIV and AIDS.

During the afternoon’s program, the veil between the living and the dead grew thin. I heard the voices of Black gay men past and present; I was reminded of our connected lineage, of the strength and the importance of our collective voices.

On stage, Hennessy recited the names of men he danced with, made love to, and shared space with — remembering as a cathartic meditation. Time ceased being linear and the past superimposed itself onto the present. It was 1994; Hennessy just received news filmmaker Marlon Riggs had passed. You could see the loss in his eyes.

A voice whispered: “As long as I have work then I’m not going to die, cause work is a living spirit in me — that which wants to connect with other people and pass on something to them which they can use in their own lives and grow from.” I felt Riggs’s spirit reach out to me.

Time continued to overlap. It was the week prior and the President of the United States just signed an executive order eliminating federal funds to international organizations that promote and support abortions — the “Gag Rule” or the “Mexico City Policy” as it’s been known. It was also 1984; President Ronald Reagan just signed the policy into action.

Conjured by the words of his sister and panelist Rhodessa Jones, artistic director of the Medea Project: Theater for Incarcerated Women, dancer Bill T. Jones brushed up against me: “Art — when it is really doing what it should do — teaches abstract thinking; it teaches teamwork; it teaches people to actually think about things that they cannot see.”

I thought to myself, what is it we can’t see?

It was 1993; the Gag Rule was being repealed by President Clinton. It was 2001; the policy had been reinstated by President George W. Bush. It was 2009; the Obama administration celebrated the second repeal of the policy. But the invocation had brought us back to the present. The Gag Rule was now reinstated and grossly expanded by the current President. Hennessy reminded the room how several of these now-defunded organizations not only advocate for reproductive health but also for HIV/AIDS prevention and treatment services.

“As an artist, you have a duty to comment on these things if you have the gift to do it,” the late choreographer Ed Mock whispered.

Back on stage in a panel exploring threads between art and activism, Oakland dance artist, author, and musician Brontez Purnell poured himself a glass of red wine and acknowledged that he may be coming off a bit uncouth. After a long sigh, he stated that artists are in the tradition of keeping the proverbial wheel of life moving, despite the chaos and dire nature of the world. Art makes life bearable, he proclaimed.

I found solace in Purnell’s statement. He reminded me I was part of an artistic lineage of Black queer resistance. Artists have endured oppressive administrations and the stigma of disease, all while loving unapologetically and continuing to create.

The afternoon’s ritual revealed itself fully. I felt a sense solace and understood: it is through art that we will advocate for change and achieve the respect and freedoms we deserve.