These days I’m spending a lot of written words and close conversations on how to stay effective and encouraged while working to resist injustices and threats to the most vulnerable among us. When we’re talking about art or writing, we’re also talking about self and world: what we need to do to survive as art laborers, and what service or interventions are most needed at the levels of practice, field, cause, and community. It has helped to telescope in and out — geographically, historically — for perspective on what, over time and space, is the most worth protecting: what strategies, long term and short, have benefited the most lives. Many of the people I’m lucky to be close with know that the turn our political and cultural climate has taken is not a break, but a continuum. These people, and so many others, have been fighting on behalf of the politically and violently oppressed for a long time, so there’s a lot of wisdom around.

The following is an idiosyncratic and incomplete list of advice and observations that have been useful for me as I get ready for the times and work ahead.

1. Affect and empathy are the most important forms of knowledge

These are the first lines of Martine Syms’ poem in three parts, A Thread Or Line That Holds Things Together: 99 Subtle Maneuvers (from “Part I: Interpretation, the action of explaining the meaning of something”): 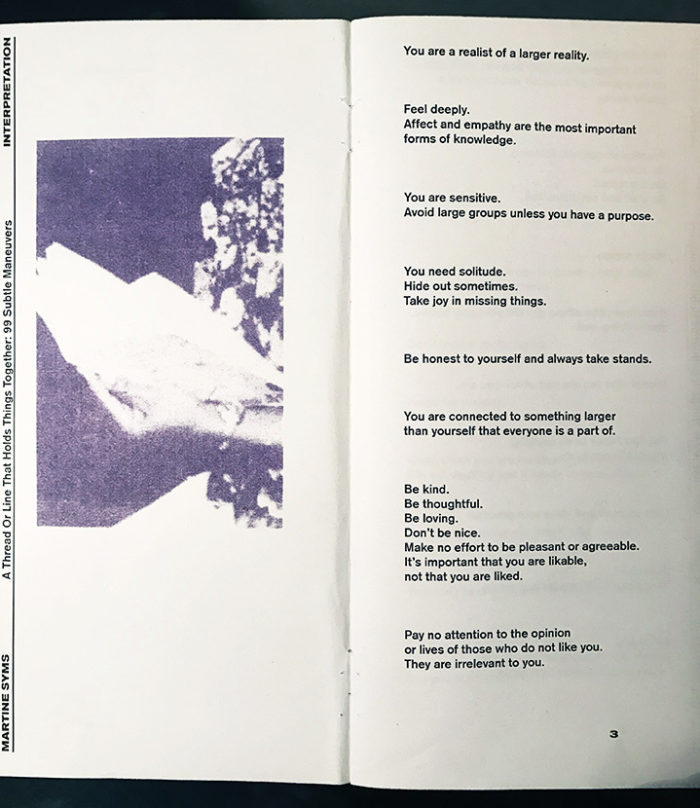 The last time I brought a book to a bar, it was this one — a booklet — and I was at Underground SF, where a friend was deejaying. I was reading it for the first time, and I was so moved that I asked the bartender if I could read it to him. I waited impatiently, excited, for him to fill a drink order, and then he turned back to me and I read him Part 1. The bartender was moved, too. While we read or listen, Syms’ advice to “you” brings us into the same, intimate society as the voice addressing itself. These tender directives of self-care are offered like self-help aphorisms with the intelligence and ethics of being vulnerable to and deeply connected to the larger, varied conditions of life that hold us all.

Then I was reading the poem on the dance floor, not ready to leave the company of all this sensible advice. So I made a short video of this excerpt from “Part 2: Execution, the carrying out or putting into effect of a plan, order, or course of action,” as a direct channel to the time-space-soundscape of being simultaneously an audience to this work and to my friend’s set, in that moment:

I recently read an interview with Syms where she describes the way a public is constituted around ideas as an audience, through the correlation between form and constituency. For me, right now, this observation feels most relevant in terms of political action and analysis: where my imagination has been working the most these days. Last week, I joined the demonstration at UC Berkeley in which a broad constituency of people came together to block a speaking event because, among other reasons, it posed an immediate threat to members of Berkeley’s student community. Sorting through mainstream and leftist media accounts of the event became homework for discussions I’ve been having since then about whether or not the actions taken had been “successful” or “strategic.” But the most compelling information I’ve held onto is the feeling that brought me out that night — solidarity and love for friends and a broader community calling for support — and the joy of witnessing an emergent and complex public, composed that night by those events and by individual choices made in large numbers to take action, support, witness, and march.

2. Make visible the connections between things. 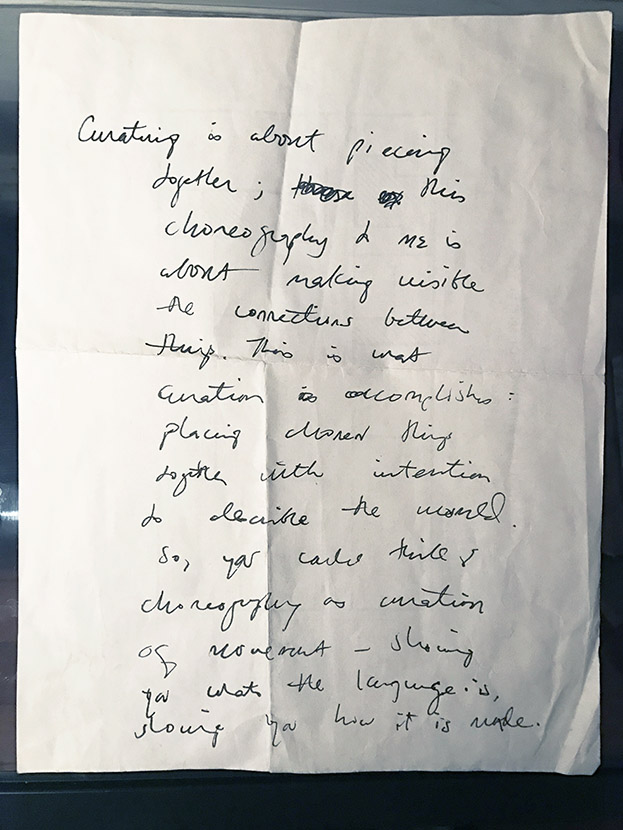 Note to self: choreography as curation of movement. Photo: Sophia Wang.

My scrawl says this: Curating is about piecing together; this choreography to me is about making visible the connections between things. This is what curation accomplishes: piecing chosen things together with intention to describe the world. So, you could think of choreography as curation of movement — showing you what the language is, showing you how it is made. I wrote this note to myself last fall when I was thinking about a piece of choreographed movement I had to learn, which required moving seamlessly through what felt like very distinct forms, images, positions (and the different modes and cultural contexts for movement that tag along). It gathers, shorthand, some basic ideas I return to all the time: movement as language with syntax, composition meant to deconstruct form, and finding what’s portable across forms and practices. This last thing is how I find lines of integrity and value across the many different kinds of work and collaborations I do. This, too, seems really important right now for stamina and resourcing around solidarity activism and organizing: a diversity of tactics will sustain our long-term strategies because we’re going to need everyone, and everyone’s got different limits, motivations, fluency, and resources.

I’m also glad to know that other people are thinking about choreography as curation, or the other way around.

In 2013, I had recently finished a poetry dissertation that included a chapter on Bernadette Mayer’s Studying Hunger Journals, and I was also building a dance and performance practice. Brontez Purnell invited me to work on a duet to be performed at the Berkeley Art Museum that spring, and I decided to make it a movement-based engagement with the relations and qualities of address in Mayer’s work with which I’d just spent so much time. It might have been this excerpt that sent me looking for other sections of the work that could serve as movement directions, spatial cues, and notes for the choreography:

I only need this space to move around in, to do nothing. It’s the same. It’s never the same. Whether you experiment with syntax or elation, the movement’s the same and it’s nothing. YOU are still here. I am still moving like someone else, someone I don’t know. If only I could take my small business seriously, move like a poet, kill like an owl. Try for an effect. And the strangest thing of all, was once, the more I work at it, the more I produce, the less it comes together, the less it’s mine.

I invited Bernadette to contribute her voice, reading her work, and she agreed, so in April that year I went out to see her in upstate New York and made some recordings, which became the soundtrack for the piece.

How do we move like poets? With a movement that’s as resourceful with bodies in space as poetry is with language.

How do we kill like owls? This one’s harder to answer without giving away one’s hard-earned strategies for slaying. 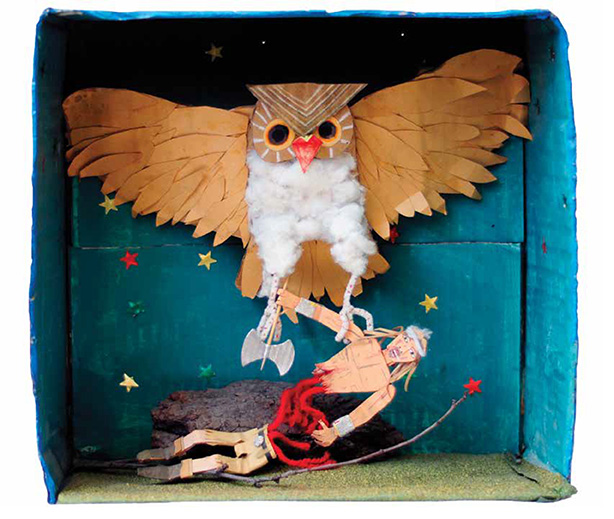