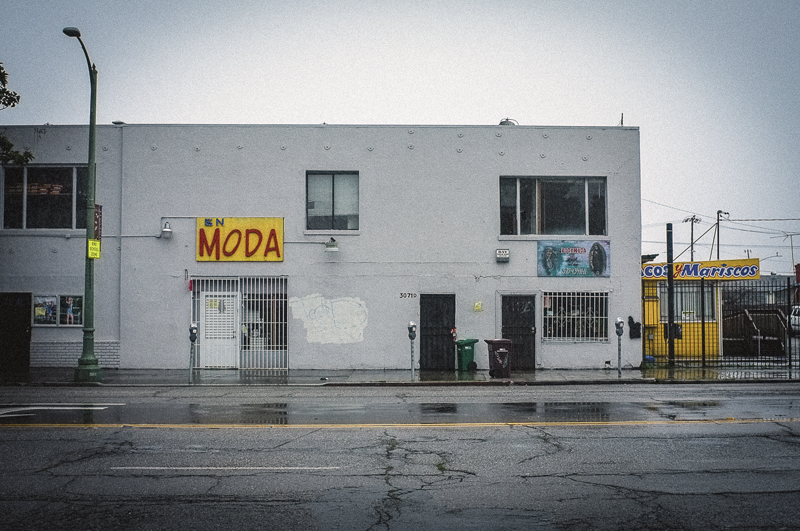 To neighbors, the informal artist colony and underground venue known as Ghost Ship was a blemish or a curiosity — a source of late-night noise and decorative clutter on the periphery of East Oakland’s predominantly Latino Fruitvale district.

A mural on the car-stereo shop next door depicts a street sign for adjacent East 14th, the name replaced by nearby International Boulevard twenty years ago. Around the corner are a women’s boutique, En Moda, and a purveyor of religious goods, Botanica Tres M’s. To the south are pastel-colored single-family homes in the California bungalow style.

Before a fire eviscerated Ghost Ship on December 2 — claiming the lives of thirty-six, all but one of whom were attendees or performers at an electronic music event that evening — Fruitvale native and EastSide Arts Alliance cofounder Favianna Rodriguez wrote in a statement that “none of my neighbors knew this venue.”

Oakland’s unsanctioned arts venues and homes use secrecy for security and cultural cachet. The trouble, longtime activists observe, is that the insularity instills a sort of cultural myopia: suddenly spotlighted and embattled this past month, many warehouse-dwelling artists neglect to recognize the struggles for housing and creative expression that precede and surround them.

The disaster and its ongoing aftershocks (selective city code-compliance crackdowns and landlord panic or opportunism) spurred a countervailing avalanche of mutual-aid among warehouse residents and sympathizers, including loud demands for legislative relief. But none of the fundraisers this writer found — cumulatively, over $1.5 million dollars in relief funds — explicitly support those businesses neighboring Ghost Ship, which sit smoke-damaged and shuttered by inspectors from the City of Oakland.

Which begs the question: Will the people surrounding the warehouse residences and venues in Oakland’s flatlands — largely low-income people of color disproportionately displaced and subjected to substandard shelter at least since the Black Panthers demanded fair housing in 1966 — benefit from the wellspring of financial support and political will? 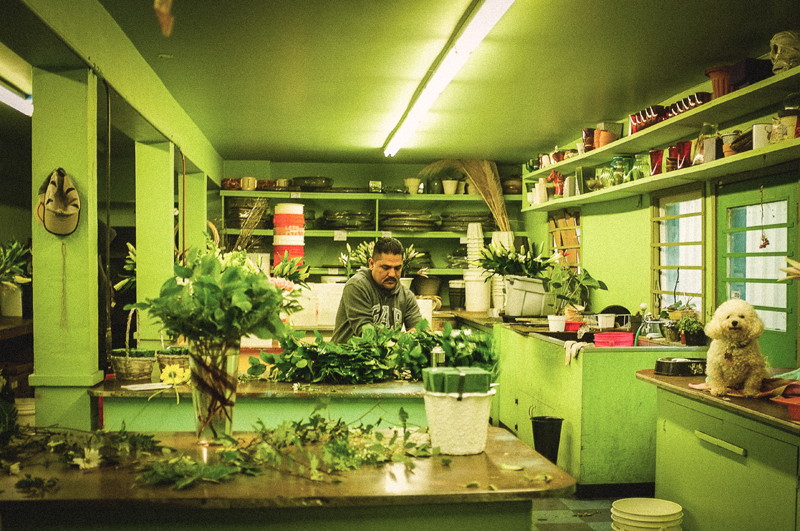 One attempt at an affirmative answer is the Emergency Tenant Protection Ordinance, written in response to the fire by Steven DeCaprio, a formerly homeless musician who founded the housing’ rights organization Land Action, with input from activist consortium Oakland Justice Coalition. “Of course I wanted to write it as inclusively as possible,” DeCaprio said. “This isn’t just about protecting artists. It’s about protecting communities.”

That’s also the message of prominent civil-rights attorney John Burris, whose office has been contacted about hundreds of evictions throughout the Bay Area since the fire. “We gotta use this energy to reexamine [Oakland’s Just Cause for Eviction ordinance],” firm housing specialist James Cook told me, “not only because it doesn’t account for artists living in spaces like Ghost Ship, but because it doesn’t provide protections for low-income ownership — which sets a really low expectation for minorities in this community.”

“Artists seem like another class that’s vulnerable to displacement,” Burris said at a public forum in Fruitvale last month. “I want to make sure people aren’t arbitrarily evicted, that this isn’t another excuse to change the makeup of the community.” This holistic perspective seemed lost on a white musician at the meeting, who cried out, “We’re the heart and soul of Oakland.”

DeCaprio’s ordinance provides amnesty for residents in various kinds of unpermitted housing. It extends eviction protections to tenants regardless of code, zoning, or lease violations and it limits city notices-to-vacate to instances of life-threatening conditions. Plus, it defines pathways to legitimize unofficial residences as permanently affordable housing cooperatives — with or without landlord cooperation. 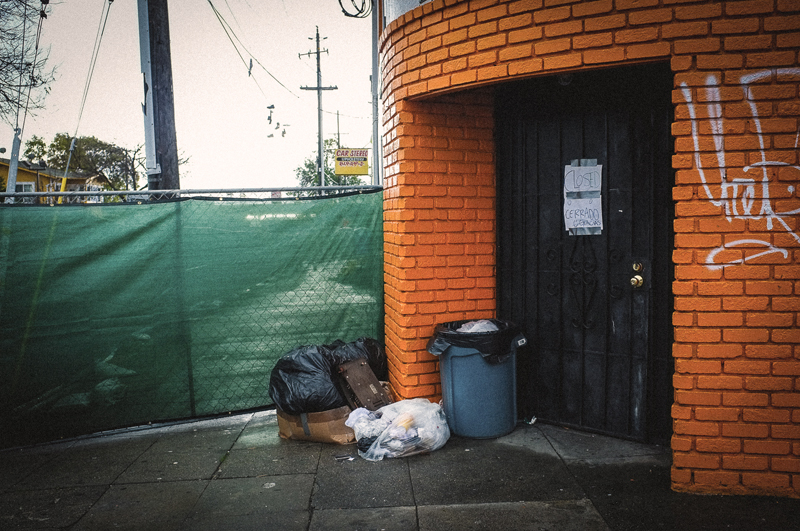 A shuttered business near Ghost Ship. Photo by Elizabeth Holzer.

DeCaprio expects that last provision — which relies on the city’s power to expropriate private property through eminent domain — to attract the most pushback as the legislation proceeds towards officials’ consideration. “There’s always resistance to poor people acquiring property, as if empowering them is somehow offensive.” (Local landlord groups did not return requests for comment; the Oakland Warehouse Coalition is asking the public to show support for the ordinance at tomorrow’s Rules & Legislation Committee, which determines City Council agenda items.)

The ordinance reflects DeCaprio’s personal experiences of Oakland warehouses as refuge. It’s also tribute to his former housemate Denalda Nicole Renae, an eviction-defense organizer who died in the fire. “The fire was at an art event, but it was in the sort of unsanctioned space where a lot of people who are ostracized, maligned, and oppressed find at least relative safety.”

But oppression leading some people to warehouses doesn’t make warehouse tenants an oppressed class. And rather than an honest reckoning with their role in gentrification, DeCaprio noted a streak of brazen thoughtlessness among the artists newly threatened, and thus newly politicized, in the wake of the fire.

The most prominent advocacy outfit to form following the fire is We the Artists of the Bay Area, which is led by a “first circle” of thirteen people associated with industrial arts, Burning Man, and the tech industry (including Jon Sarriugarte, creator of the fire-breathing snail-car ridden by Oakland Mayor Libby Schaaf at her inauguration.)

Over 10,000 people signed a WABA petition that calls for local governments to compassionately regulate what are described as code-defiant “artistic accelerators and incubators, fostering the creative capital that makes the Bay Area such a vibrant place to live.”

Fire survivor Nihar Bhatt is among the artists who found the technocratic jargon alienating. “The underground scene that a lot of the people who died were a part of isn’t about to be institutionalized,” said Bhatt, who coauthored a competing statement. “But there are organizations amenable to the direction of development here — they shouldn’t claim to speak for all of the artists in the Bay Area.” 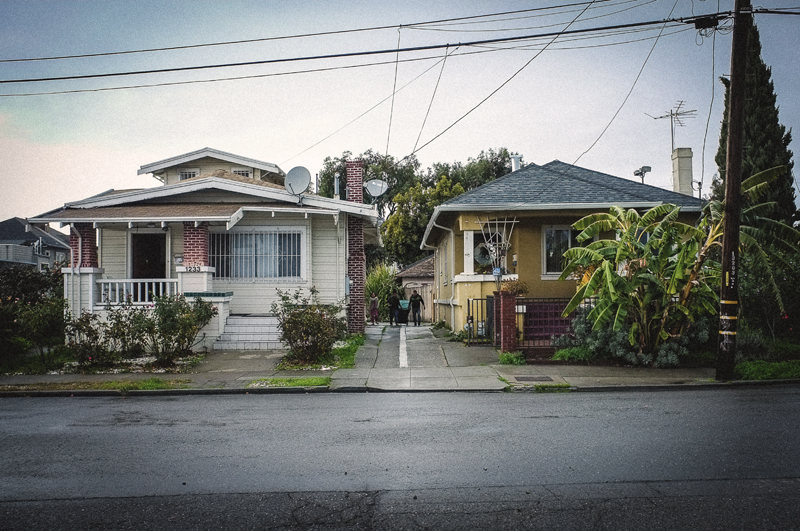 “Some of us have been in tech for a long time. I did corporate PR for Schwab for seven years,” said WABA spokesperson Lara Edge, who runs a business in American Steel Studios, noting that leadership will begin to revolve next month. “There’s a different language that speaks to people who hold the money that influences government, the money that influences landlords. It’s not going to speak for everybody.

“We intentionally used some of those words to show that we can also relate to the rest of the tech world or the bubble around us or the greater community — that we’re not just a bunch of artists in warehouses.”

Many artists in warehouses, meanwhile, are tending to impacted peers’ immediate needs in the same way they advertise rooms or book shows: discretely, leery of aggravating landlords likely to evict before they invest in upkeep.

(Full disclosure: A neighboring business owner voiced concern about this writer’s warehouse space at a press conference last month; some of the same tensions I address here arose, and led to us collaborating on multiple fire-relief benefit gigs.)

Warehouse resident Hannah Nelly, for example, raised the first ten thousand dollars of the Oakland Family Fund at an invite-only chili dinner at her home and then, with input from a diverse group of neighbors, quietly steered the money to code-compliance and safety improvements in substandard residences. “Until people feel like landlords or the city are on their side, they’ll probably keep things underground,” Nelly said. “That’s why they’re underground to start with.”

But when this covert culture siloes the arts from their environment, it divides potential allies. According to Rodriguez of EastSide Arts Alliance, outreach also averts tragedy. “When art spaces work hand in hand with the community, safety in its full form becomes a natural priority.”