Series Night Scene
Night Scene
Series
Organized by Gordon Faylor
Bay Area musicians explore and respond to the onset of winter and the encroaching night that accompanies it. By turns veiled, ominous, haunted, or explosive, these combinations of image and audio feel around – or further conceal themselves – in the dark. 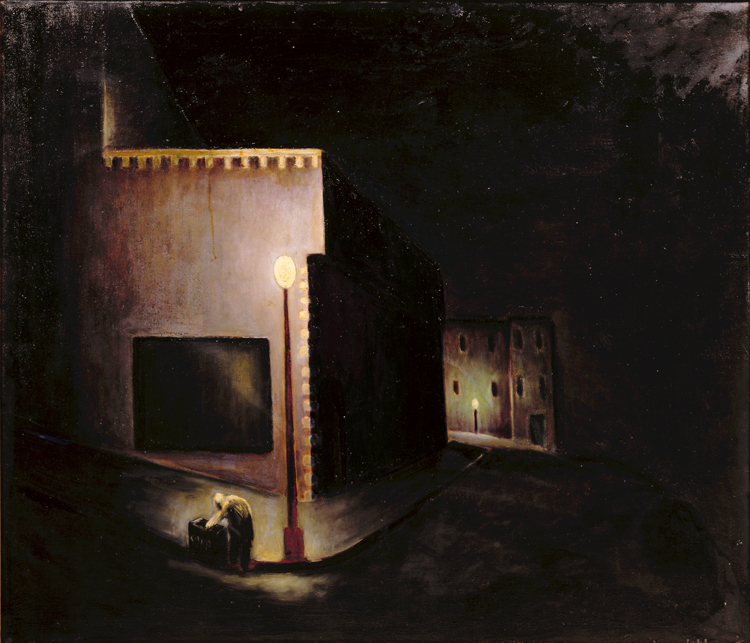 On June 20th, the Summer Solstice hit San Francisco (at 3:34 p.m., to be precise). According to timeanddate.com, the day lasted fourteen hours, forty-six minutes, and fifty-seven seconds. By the 21st, daylight had contracted some two seconds. The day after that, four more. Now, as we enter December, we’ve lost five hours of light, and stand to lose about another quarter of an hour before the Winter Equinox on December 21. It’s cliché, perhaps, to think of the winter as a cavernous time, but it’s hard to avoid feeling somehow encased or obscured; in the Bay Area, our winter is most apparently characterized by this encroaching night.

As a way of reckoning with this seasonal onset, we’ve commissioned pairings of original audio and images from five local musicians, encouraging them to create something that might explore the tension between composition and field recording, or serve as an ekphrastic treatment of our early winter environs, or simply function as a kind of timestamp for a given moment in the year. The results, whether veiled, ominous, haunted, or explosive, share a quality that remains under cover of night.

Which brings us to Night Scene — a 1932 painting by Matthew R. Barnes, a Scottish artist who moved to San Francisco in 1906, shortly after the earthquake that decimated the city that year. An autodidact, Barnes painted in his spare time; he was an elusive figure, yet championed by the likes of William Saroyan and celebrated by critics around the country. Aline Kistler wrote of a Barnes exhibition in the San Francisco Chronicle: “These are strange paintings to be produced in 1929. There is about them a feeling of foreboding, such an air of instinctive fear that it would be far easier to relate them to a superstition ridden age than to the present day.” 1

Given the turmoil 2016 brought us — most recently with the unspeakable agony caused by the Ghost Ship fire, which occurred after these commissions were completed but still seems inevitably connected — such an age can seem close at hand. We continue to feel around in the dark.